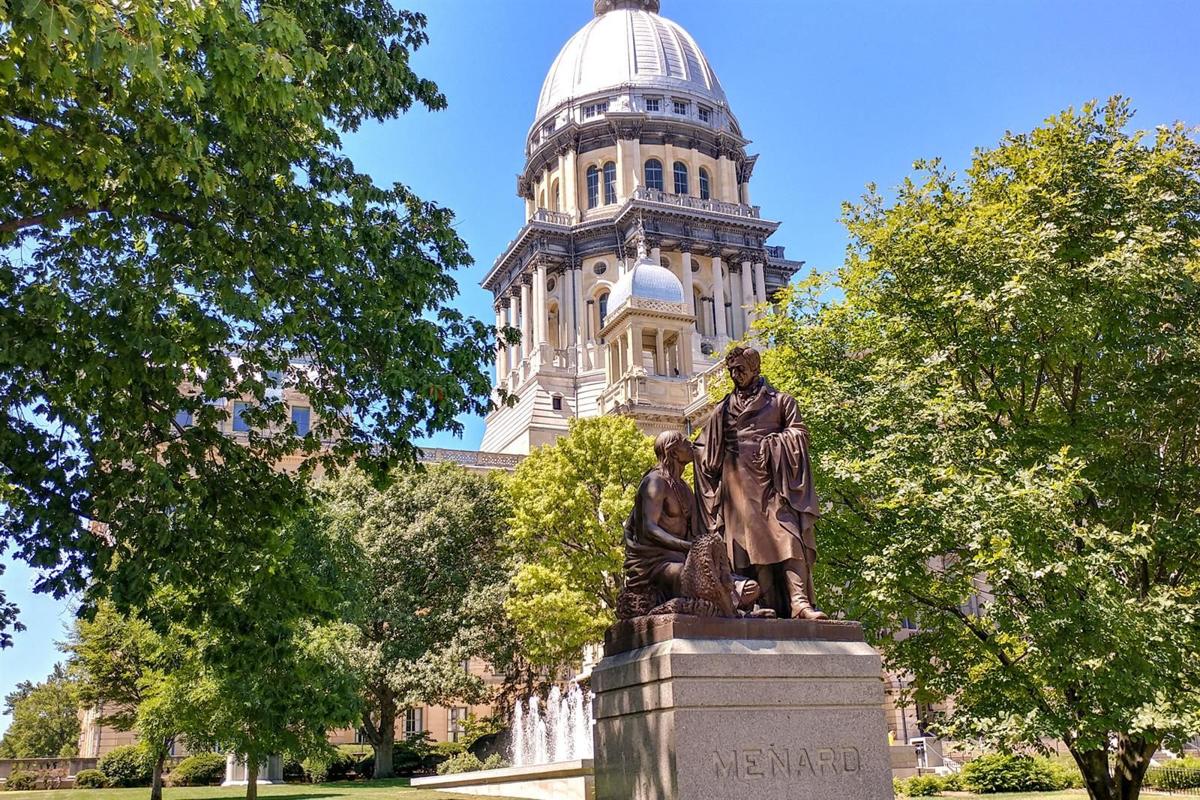 A statue depicting Pierre Menard, Illinois’ first lieutenant governor and a slaveowner, standing next to a kneeling Native American man, will be moved into storage, a four-member panel voted Wednesday. 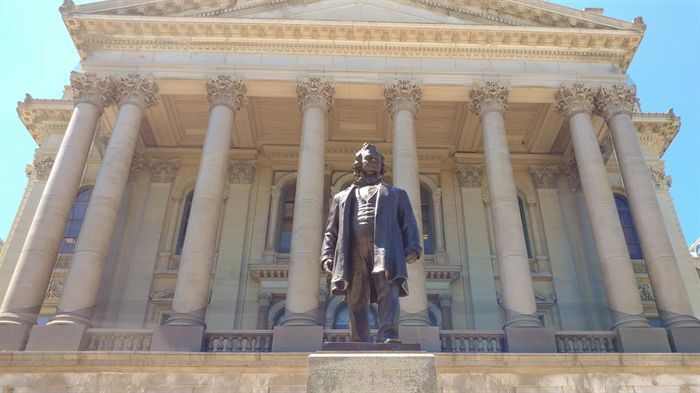 A representation of Stephen A. Douglas, a U.S. senator from Illinois and a justice on the state’s highest court, is located in front of the Statehouse. It is just one piece of artwork depicting the slaveowner. The Board of the Office of the Architect of the Capitol voted Wednesday to remove it, and the panel did not take action on another Douglas statue located inside the building.

SPRINGFIELD — Statues of two slave-owning men with historical ties to Illinois will be moved from the Statehouse grounds in Springfield to a secure storage site, a panel of four officials voted Wednesday morning.

The decision comes almost six weeks after House Speaker Michael Madigan asked the Office of the Architect to “move expeditiously” in evicting representations of Stephen A. Douglas and Pierre Menard from the Capitol.

Madigan’s request was the longtime Chicago Democrat’s first public statement in the wake of civil unrest sparked by the death of George Floyd, an unarmed Black man who died May 25 after a White Minneapolis police officer held his knee on Mr. Floyd’s neck for almost nine minutes.

Douglas was a slave owner who served as Illinois’ secretary of state and in the U.S. Senate.

He proposed the Kansas-Nebraska Act, which repealed the Missouri Compromise and replaced it with a system for states to decide whether to be pro- or anti-slavery.

Menard, also a slave owner, was the first lieutenant governor of Illinois, and he supported political actions devised to ensure slavery was legal in the state.

“Memorializing people and a time that allowed slavery and fostered bigotry and oppression has no place in the Illinois House, where the work of all Illinoisans is conducted,” Madigan wrote in the July 9 statement. “We can only move forward in creating a more just world when these symbols of hate are removed from our everyday lives.”

The work order, which also includes removing the figures’ bases and foundations, can be completed in two to three months.

She added that the granite bases could be repurposed.

Board members of the Office of the Architect of the Capitol also began the process to move a bronze, 300-pound likeness of Martin Luther King Jr. to “an appropriate location” at the building.

The statue is currently at the intersection of Second Street and Capitol Avenue — colloquially referred to as Freedom Corner — in front of the Illinois State Library.

Scott Kaiser, assistant secretary of the Senate and a member of the board, said at some point in the future, the group should consider commissioning a new portrayal of King, leader of the civil-rights movement in the 1950s.

“No offense to whoever did it, but I just think that’s a poor rendering of Dr. King and I think we can do better,” he said.

The likeness is located across the street from the Statehouse because of an administrative rule dictating that only historical figures related to Illinois are permitted to be installed on the Capitol grounds.

The panel approved a motion to revise those guidelines.

John Hollman, clerk of the House and co-chair of the board, proposed each of the items acted upon on Wednesday. He did not suggest specific language for the rule change, only the “end goal” of ensuring that King’s statue is moved.

Brad Bolin, assistant clerk of the House, pointed out the board will need to reconvene to formalize and approve the alteration. It would then go to the Joint Commission on Administrative Rules for final action before it could take effect.

There was a discussion about why the focus of Hollman’s proposals pertained to the controversial statues outside the Statehouse but not the ones inside. Another statue of Douglas, for example, is on the second level of the Capitol, in the rotunda.

“The outdoor statue is certainly prominent, but as people come into the building, school groups do tours, in some ways the indoor statue is even more prominent than the outdoor one,” Kaiser said. “... I just see inconsistency there a little bit ...It just seems to me that we’re making a decision now on Douglas — there’s two of them. Why not take them both out?”

Bolin also inquired why there was no system in place to receive public comment about the artwork removal. Lawmakers could utilize committees already instituted to generate public discussion, he suggested.

Hollman also proposed contracting a firm to update members on historical structures “so we kind of know what we have on our hands currently on the complex and maybe how we want to treat those going forward.”

“Our discussion today focused on the statues outside the Capitol Building,” Aggertt said in an email. “There will be future discussion on those located on the interior of the building.”

In early July, Madigan ordered the covering of a large portrait of Douglas displayed in the House chamber. He said in a statement that when representatives reconvene in November, he would propose a resolution replacing it with one of former President Barack Obama, “a more fitting representation of the modern-day Democratic Party.”

Aggertt’s office does not have authority to dictate what artwork is displayed in the Illinois Supreme Court building across the street from the Statehouse, she said.

There, in a room used by attorneys to prepare for oral arguments, is a portrait of Douglas. He was a justice.

In a statement issued in response to the Chicago Daily Law Bulletin earlier this month, the court said some of the justices portrayed in the 109 paintings in that room “held racist views.”

“Removing the portraits will not change that fact,” the justices said in the statement. “... This Court recently released a statement on racial justice and declared that racism exists, whether it be actualized as individual racism, institutional racism or structural racism, and it undermines our democracy, the fair and equitable administration of justice, and severely diminishes individual constitutional protections and safeguards of full citizenship with the attendant rights and benefits sacred to all.”