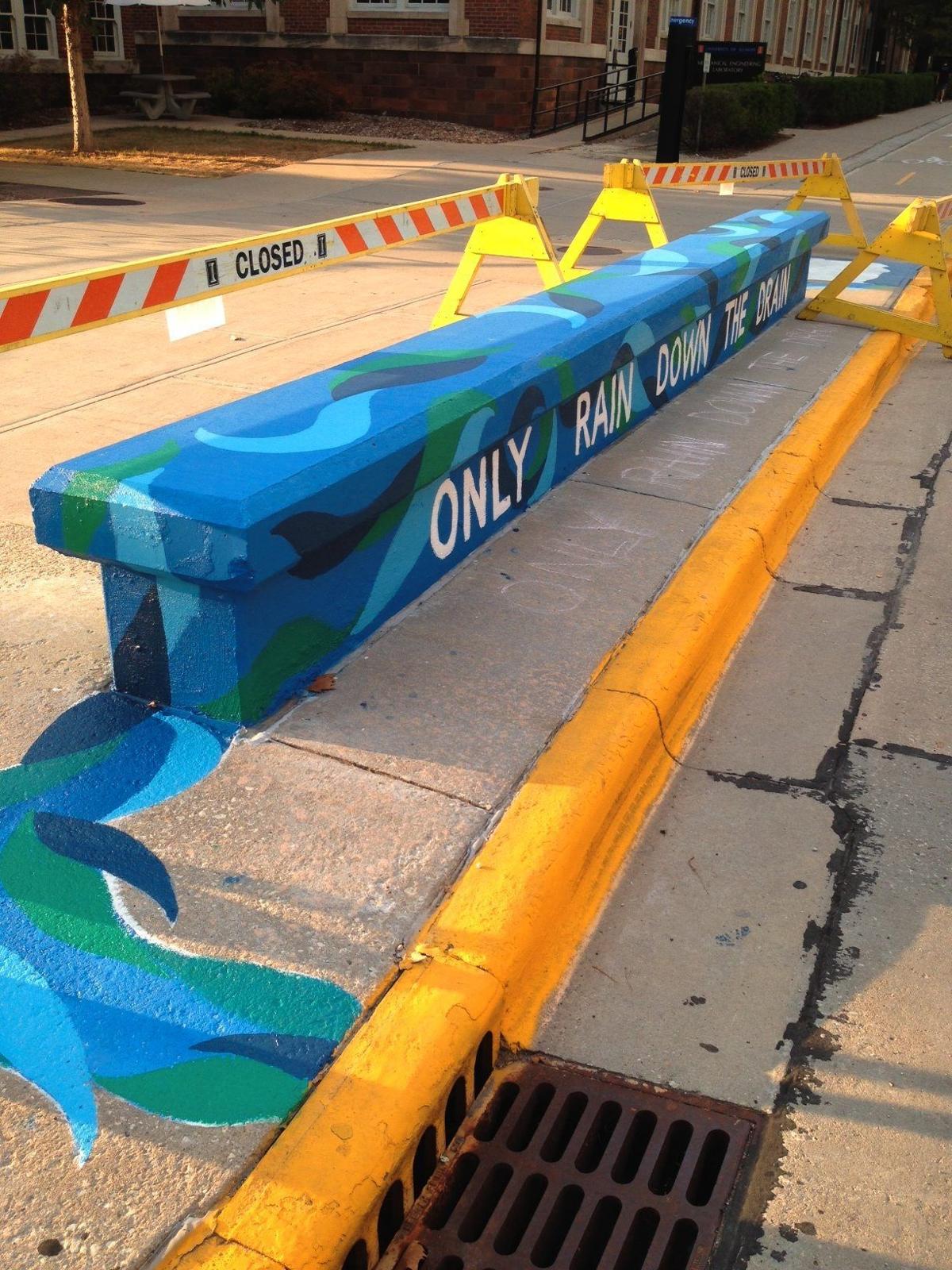 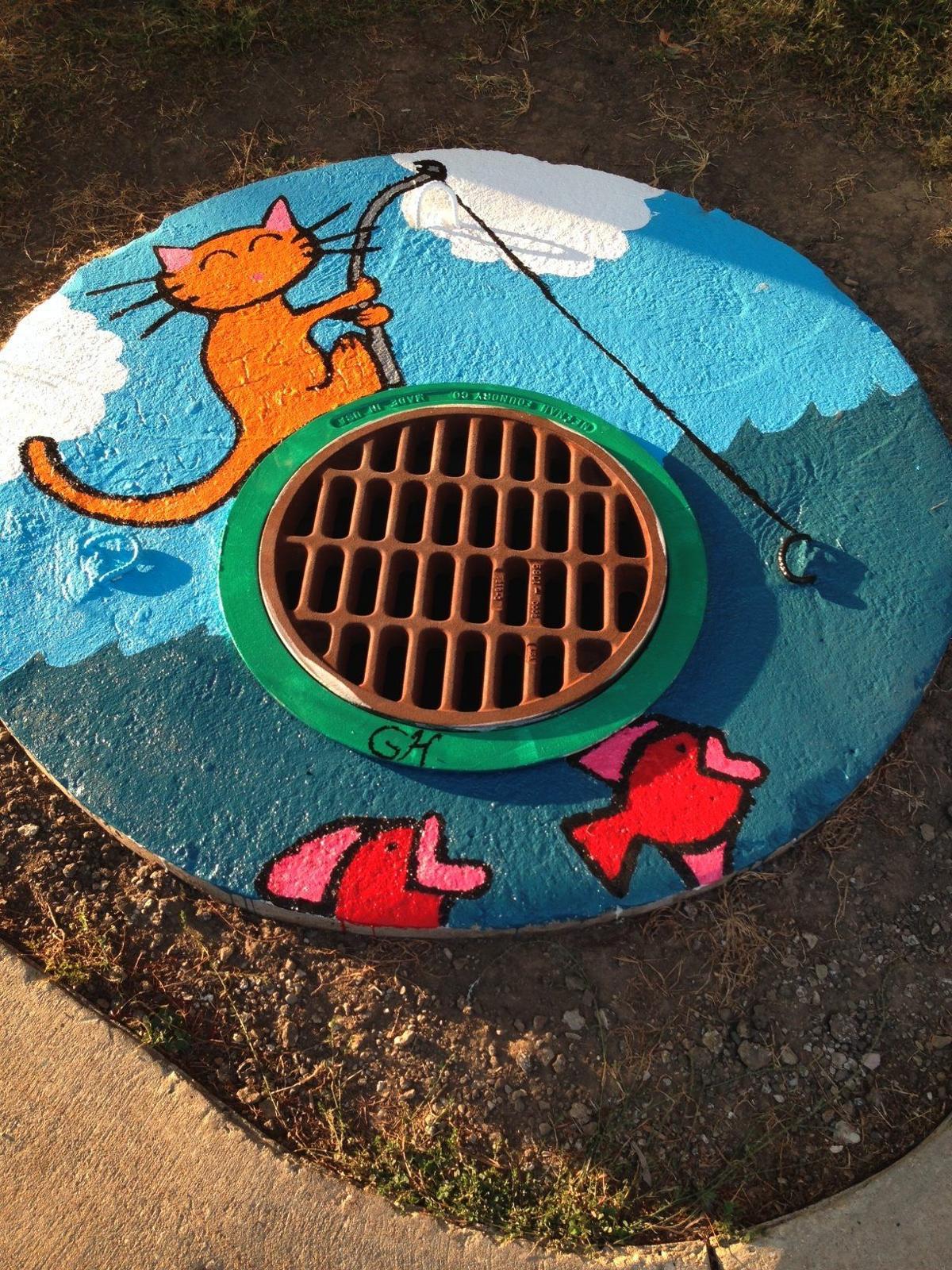 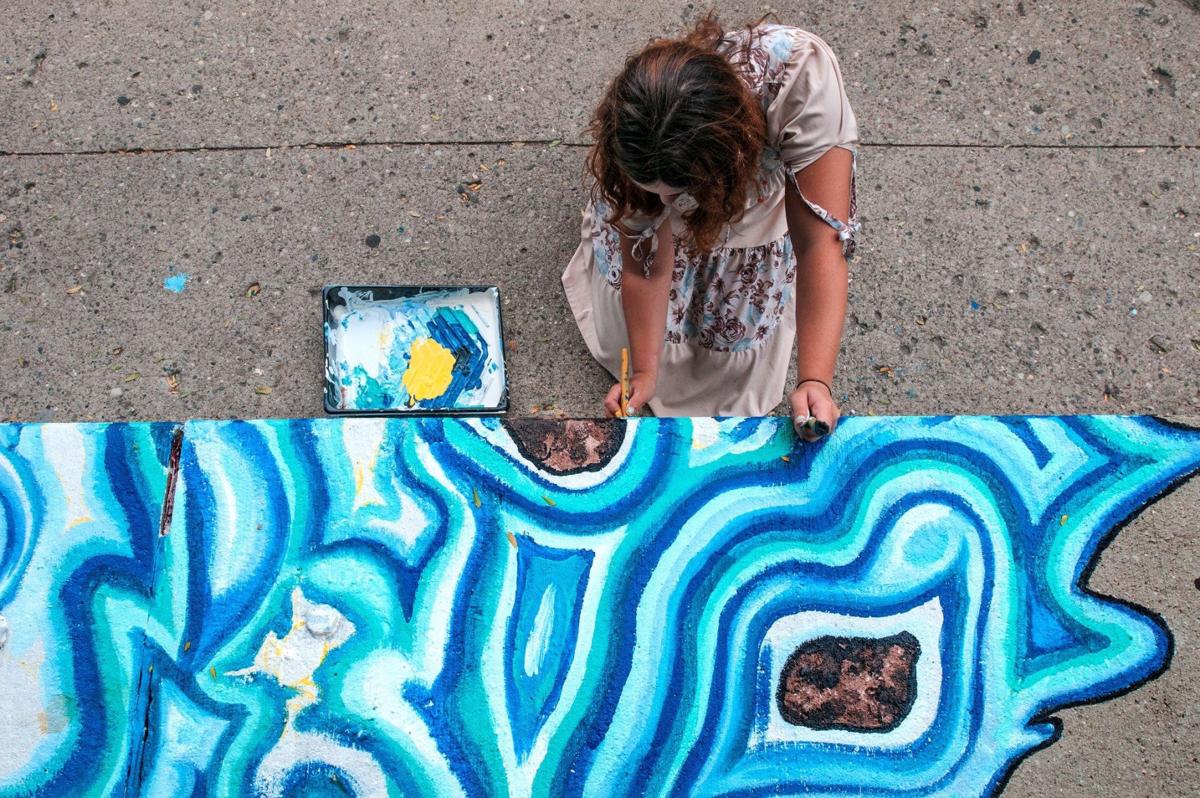 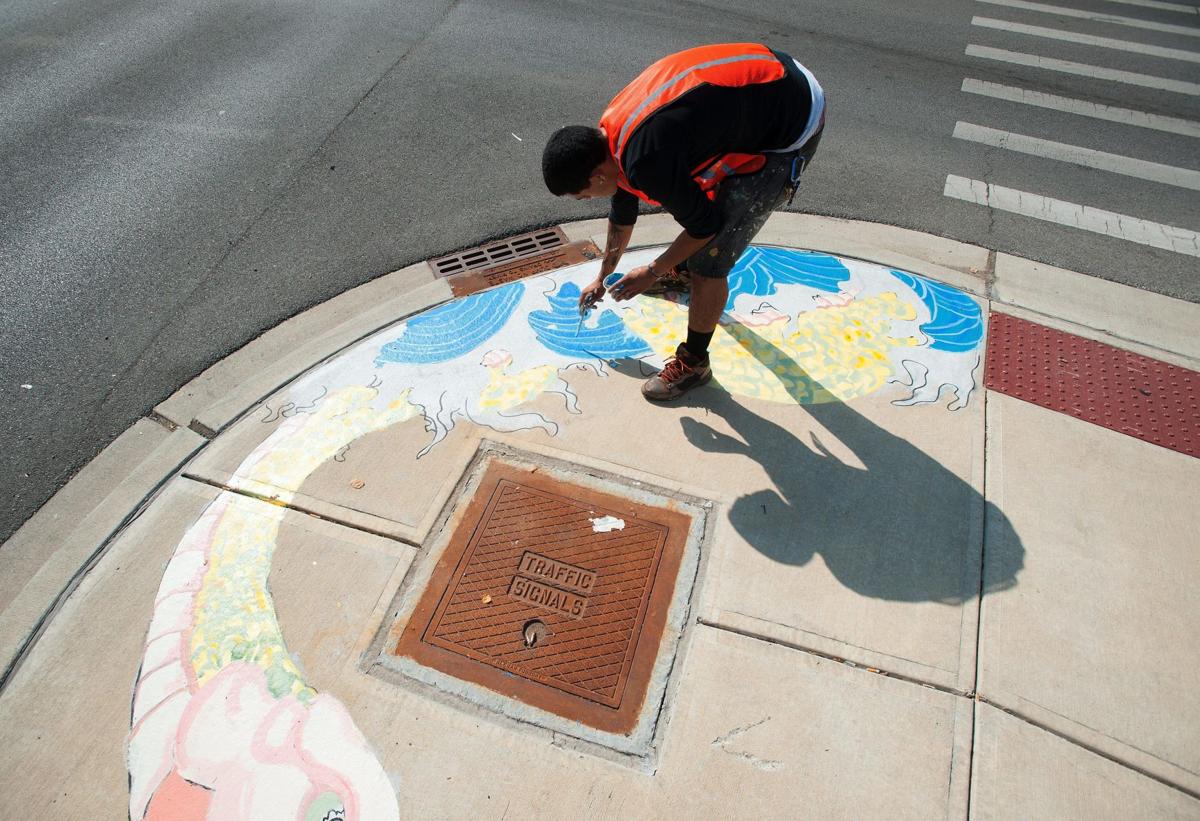 Like many folks, University of Illinois art major Langston Allston is aware of the tons of plastic trash that float in the oceans.

Attracted by the color, birds ingest the plastic and later die as result, he said.

So Allston came up with the idea of depicting a sea monster bird that has plastic trash "busting out" of its stomach, as part of a new stormwater drain mural project, a town-gown collaboration.

This past week, the UI senior painting major began to work on his mural on the sidewalk and curb near the Esquire Lounge in downtown Champaign.

"I'm enjoying it; it's definitely exciting to have this on the ground and done for the day," Allston said Wednesday.

Allston is among 12 artists — five are UI students — who are creating colorful, funky stormwater drain murals in downtown and midtown Champaign, near Urbana Park District locations and on the UI engineering campus.

The purpose of the murals is to emphasize that only rainwater, not any garbage, should make its way into storm-drain inlets.

"I've already had people stop to ask me what this project is all about," said Melissa Farley, who last week painted the side of a bridge over Boneyard Creek along Goodwin Avenue on the engineering campus.

"Hopefully it will get people to think about what they're throwing into the Boneyard," she said. "Instead of thinking about the Boneyard as just a creek that runs through campus, maybe they will think about how their actions affect broader communities."

After all, the Bottenfield Elementary School art teacher and UI alumna said, the Boneyard drains into other waterways that eventually lead to the Mississippi River.

"It's important for people to understand and talk about it," she said.

Her mural depicts the Boneyard and some of the creatures that inhabit it and its banks: fish, raccoons, snakes, turtles, frogs.

Like the other artists, she used heavy-duty outdoor acrylic paint provided by the project leaders. She painted some of the animals an unrealistic red.

"Everything about this I want to be loud," she said. "I don't want people to walk by and ignore it. I think it's important to grab people's attention, especially from down the street."

Vince Tse, a representative of MediaMath, a New York-based company, couldn't help but notice Farley's mural-in-progress as he headed north on Goodwin to a career fair.

"It's awesome. I'm just not sure I got that connection," Tse said of the don't-dump message. "I think it definitely leaves some with the impression, 'What is this?'"

Tse was in a hurry so he might not have noticed the sign near Farley. It read: "Yield Art at work. Your storm drains are becoming more colorful to remind us all to put trash in its place."

Another mural by UI student Molly Malec a block or so west of Farley's is more to the point: It depicts water running into an actual drain, and the message in large white letters: "Only Rain Down the Drain."

The slogan on the other side of the bridge mural reads: "We're all connected."

Also just west of Farley's mural is another colorful one, painted by UI student George Hwang on the concrete encircling a storm drain.

Hwang's depicts an orange cartoon-like cat dangling a fishing pole into a stream through which two bright red fish with pink lips and fins swim.

Eliana Brown, coordinator of special programs for UI Facilities & Services, came up with the idea of having local artists create the murals as part of the university's stormwater management program.

Well, she didn't actually come up with the idea; other towns have similar programs.

The first to do it was Columbia, Mo. Others who jumped in are Reno, Nev.; Bowie, Md.; Springfield, Mo.; Fayetteville, Ark.; and Michigan City, Ind., according to Brown.

She discovered the projects while doing an Internet search. Her boss, David Wilcoxen, associate director of safety and compliance at F&S, had told her to come up with a new education effort that engages the public more rather than the old one.

That one has rather small medallions attached to drains; the medallions depict a fish and warning against dumping.

Brown said the U.S. Environmental Protection Agency is interested in the stormwater drain murals, as it has asked municipalities since 2003 to educate people about waterways and about keeping them clean and healthy.

The town-gown collaborative project here, though, is the largest among those in other cities, mainly because there are two cities as well as the campus, Brown said.

The project here got underway when leaders put out a call for artists a month or two ago. Sixteen or so artists responded.

Those chosen to create the murals will each receive a $100 honorarium, with half coming from the Public Art League and the other half from the Champaign County Design & Conservation Foundation.

Allston will receive $200 because his mural is twice the size of the others.

The murals are expected to withstand the weather and other outdoor conditions for three to five years. After that the project leaders hope to have new murals created, Brown said.

"They're just so gorgeous," she said.

Facilities & Services is making a video about the project, and Brown said there might eventually be tours of the murals.

"Stay tuned. We're planning on some kind of opening event. We expect to be finished by Oct. 31."

Besides the Public Art League — Wilcoxen is its president — and the Soil & Water Conservation District, other partners on the project are the city of Champaign, Urbana Park District, and the University of Illinois.

The artists who created stormwater drain murals and their locations: