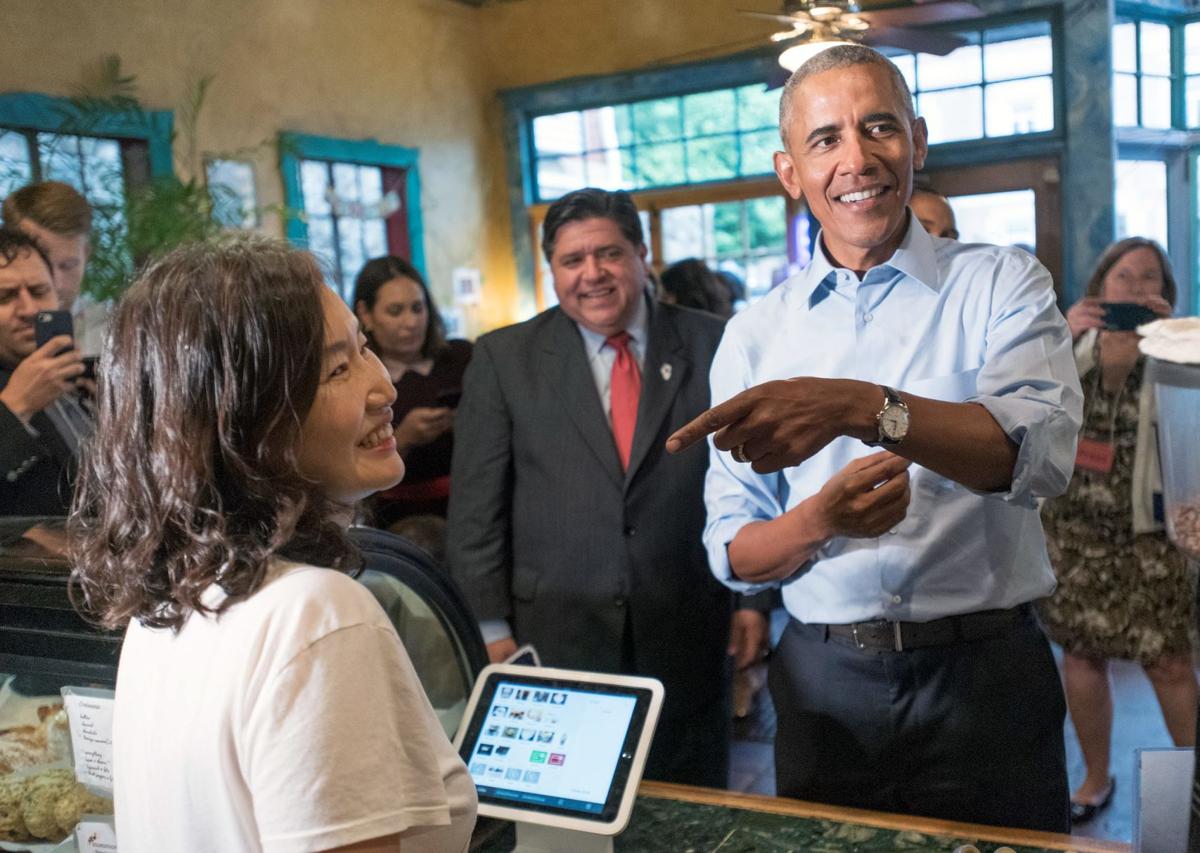 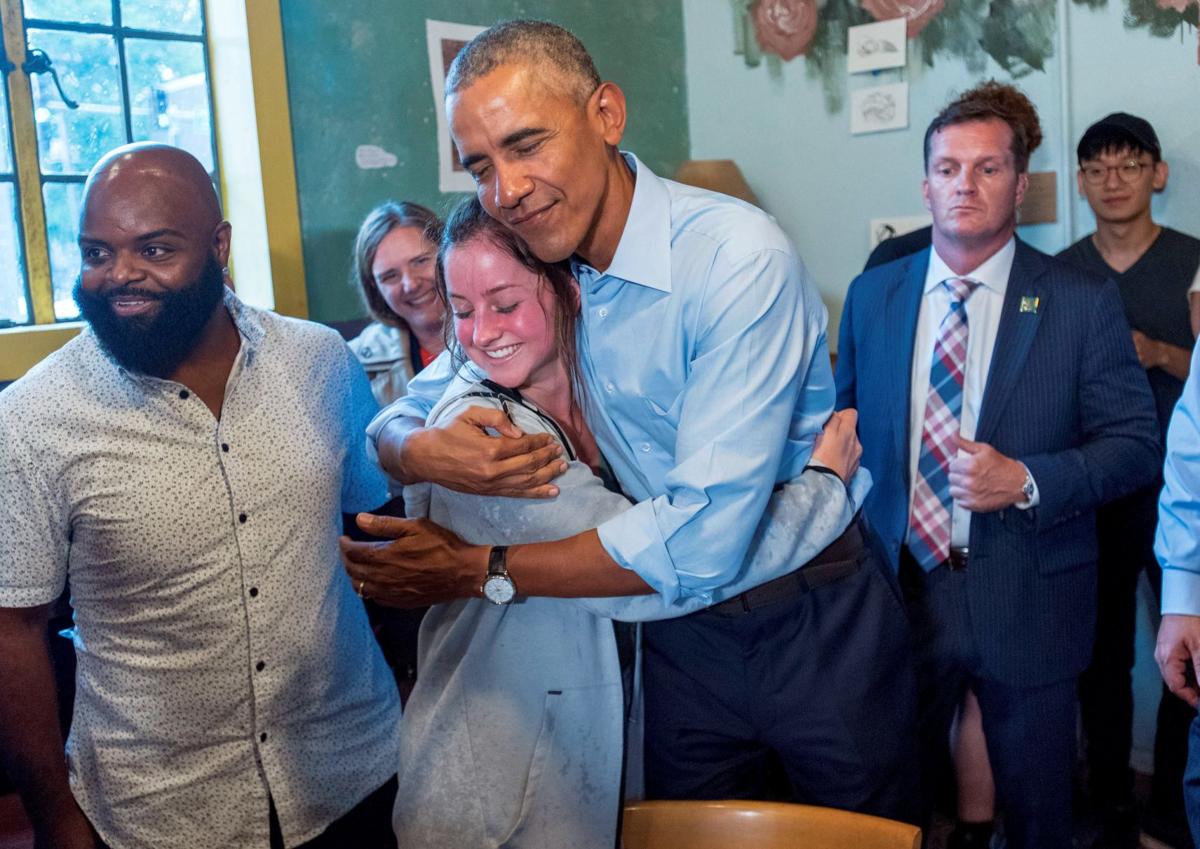 URBANA — Dana Yun's most famous customer ordered black tea and, upon her recommendation, the homemade tiramisu — then realized he didn't have any cash.

"Somebody have my wallet?" former President Barack Obama asked his staff during his surprise visit Friday to Caffe Paradiso in Urbana.

To the delight of unsuspecting customers, Obama stopped at the cafe before leaving town, following the ceremony where he received an ethics award from the University of Illinois.

It was in part a campaign event for Democratic gubernatorial candidate J.B. Pritzker and his running mate, state Rep. Juliana Stratton. They greeted patrons and urged them to vote in the November midterm elections — a theme of Obama's speech earlier in the day.

"You guys remember to vote! Governor, lieutenant governor, and all the way down the ballot," Obama called out at one point.

"Blue wave! Blue wave!" some in the crowd shouted.

Yun, a UI freshman and Champaign Central High School graduate, said she and her mom, co-owner Young Jeon, got the word about 30 minutes before the former president showed up. Jeon promptly called her son, UI junior Kenneth Yun, who hustled over after class.

"It was supposed to be top secret, but he's family," Dana Yun said.

Obama, who had shed his suit and tie from earlier in the day and carried an umbrella, walked in and greeted the surprised customers inside. He introduced Pritzker before heading to the counter to order.

Jeon was too stunned to say anything, then or later, when asked about it.

"She couldn't think. She was like, 'Oh my God.' She couldn't believe that he had come to this cafe out of all the restaurants on campus," Dana Yun said.

"I'm so honored — me, my husband, my whole family are big fans of him," Jeon said.

Obama asked Yun what he should eat.

"I said, 'You should get the tiramisu, because my mom made it, and it's very delicious," she said.

Obama told her he'd eat it on the flight to California on that evening.

Jeon wasn't sure whether to charge him or not.

"It's an honor," she said. "I wanted to give him anything and everything."

Yun said she told Obama about all the memes students posted online about missing out on tickets to see his speech.

She also got a selfie with him: "It was awesome."

Kenneth Yun got there shortly after Obama had arrived. There was already a line of students outside who had gotten wind of the visit on social media, and he didn't think he'd get past the Secret Service agents. But his mom waved him in.

"I took a picture with him, which was really cool, and I got to shake his hand," he said.

The Yuns said it was "crazy" to see Obama, and hear his voice, in person.

"He's still got the same swagger that you would see on TV," Kenneth Yun said.

Dana Yun was "one of the lucky few" who got into the speech at Foellinger Auditorium.

"I just kept staring and saying, 'Oh my gosh, this is a real human.' You always see the setup of the blue curtain and the flags on TV, and it was actually at our auditorium," she said.

Obama told the small group of reporters invited to the event that he wouldn't be answering questions, but spent about a half-hour talking easily with students and other patrons.

He listened as they explained their research projects, commenting on how it could help improve sustainable energy or treatment of Alzheimer's or Parkinson's diseases. He talked about the importance of investing in research and education, and urged the students to stay in Illinois.

"What are you studying?" he asked Nathaniel Vipperich. "Engineering," the student replied.

Vipperich had come to the cafe to study, and "the next thing I know, there's a bunch of news reporters and camera crews here," he said. "I honestly had no idea. I got very lucky."

"You're the coolest chemistry professor I ever met," Obama told him.

"You're the coolest president I ever met," Koerner replied.

Koerner, who lives near the cafe and spends lots of time at the cafe preparing his lectures, said he was initially annoyed when he arrived and saw a long line of people waiting to order.

"I thought, 'What's going on? Can't I just sit here and do my lecture in peace?'" he said. "Then someone tells me President Obama is showing up, and I thought, 'OK, I'm never going to complain again.'

"I got to shake the president's hand today. It's a good day."

Koerner found Obama's presence, and his message to vote and work for change, "uplifting."

Obama started his rounds with a hug for state Rep. Carol Ammons, D-Champaign, who had also attended the speech but didn't know he was coming to the cafe.

Her husband, Urbana Alderman Aaron Ammons, the Democratic candidate for county clerk, had given up his seat at Foellinger to his mom, Valarie, a lifelong voter and "huge Obama fan."

"She was overjoyed," he said.

He later got word that Obama planned to go to the cafe, so he suggested they all meet there for a sandwich after the speech, without revealing who might be stopping by.

"I didn't know (for sure) until he came walking in," Aaron Ammons said.

Asked what the encounter meant to her, Carol Ammons choked up and relayed something her mother-in-law told her. Before they knew they'd get tickets to the speech, Valarie Ammons had promised that "God is going to make it happen." Then, when they didn't get to shake his hand at Foellinger, she repeated that line.

"It certainly made me a believer today," Carol Ammons said.

For Valarie Ammons, who grew up in the South and never thought she'd meet a black president, "to meet him today in little ol' Champaign made a huge difference in her, and certainly in me and my husband," Carol Ammons said.

Follow former president Barack Obama from the airport to the University of Illinois' Foellinger Auditorium to Caffe Paradiso to the UI president's mansion.