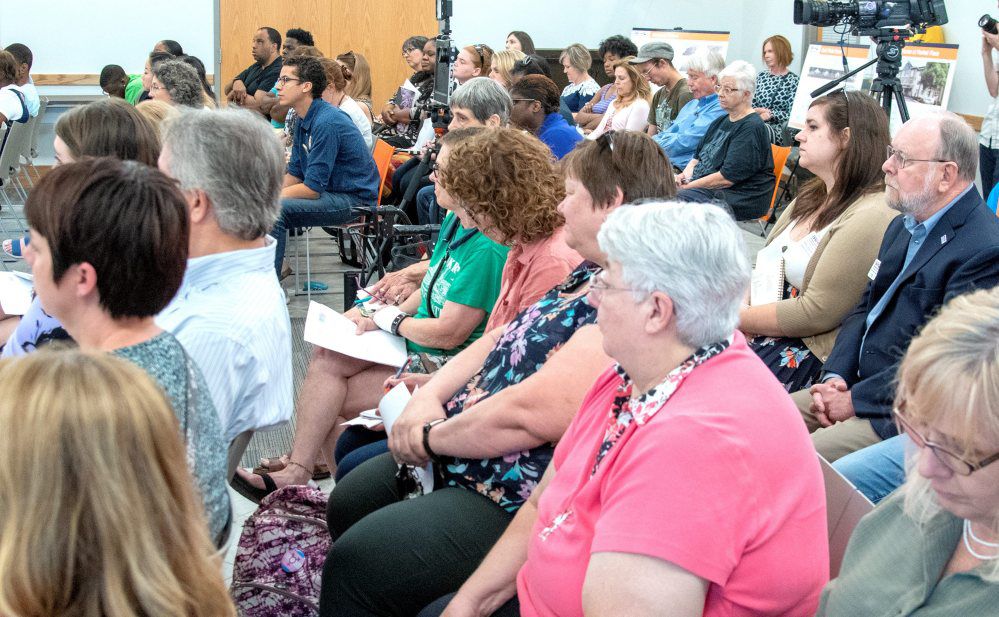 CHAMPAIGN — Rents that are too high, jobs that pay too little and discrimination are adding up to a serious lack of affordable housing for the working poor of Champaign County, according to a group of community and government leaders.

Hosted by the Housing Authority of Champaign County, this group came together Wednesday to begin tackling an issue in a community that’s seen many new higher-end apartment developments built in recent years.

The cost of housing in Champaign County:

— 20 percent: Households considered to have severe housing problems due to high costs, overcrowding or lack of kitchen/plumbing facilities.

That is: There are plenty of vacant rental units, but the rents for them are well beyond what many people can afford.

Nobody earning under 150 percent of the federal poverty level can afford rents in Champaign-Urbana, according to Esther Patt, manager of the Champaign-Urbana Tenant Union.

To afford a one-bedroom unit requires an income of at least $13.50 an hour, and most lower-income households are burdened with rents and utilities eating up more than one-third of their income — and in some cases, more than half of their income, she said.

“It’s a huge problem, because rents are too high,” Patt said.

U.S. Rep. Rodney Davis, R-Taylorville, said there are about 500,000 manufacturing jobs across the nation that need to be filled, and loopholes that exist in workforce-training programs need to be closed.

“That is a key that we all need to focus on and work together on,” he said.

State Rep. Carol Ammons, D-Urbana, urged everyone to take the time to learn where their government representatives stand on affordable-housing issues.

She also said homelessness in places where there are so many housing vacancies is “unbelievable.”

“We have a lot of (housing) stock, and people can’t afford to live in them,” she said.

Discrimination also hits low-income people hard when it comes to finding a place to live, according to Ammons. Among the common forms of housing discrimination she and others described are landlords who don’t want to rent to people who receive rent subsidies, those who turn away renters who have been convicted of crimes and those who don’t want to rent to families with more than one or two children.

Patt said the supply of subsidized housing, which is about 3,000 units in the county, meets only 20 percent of the need.

And subsidized housing is the only housing available for the working poor, she said.

Even at tax-credit housing for low-income families, the rent is so high, a single parent needs a full-time job paying $15 an hour to avoid being over-burdened by it, according to Patt.

Minnie Pearson, president of the NAACP of Champaign County, urged removing the stress of affordable housing from people.

“Stress will kill you,” she said.

Housing Authority CEO David Northern said these sessions will continue and will also bring in legislators and representatives from other communities in the county.

County NAACP president on affordable housing: ‘We all have the right to equality in all facets of our lives’