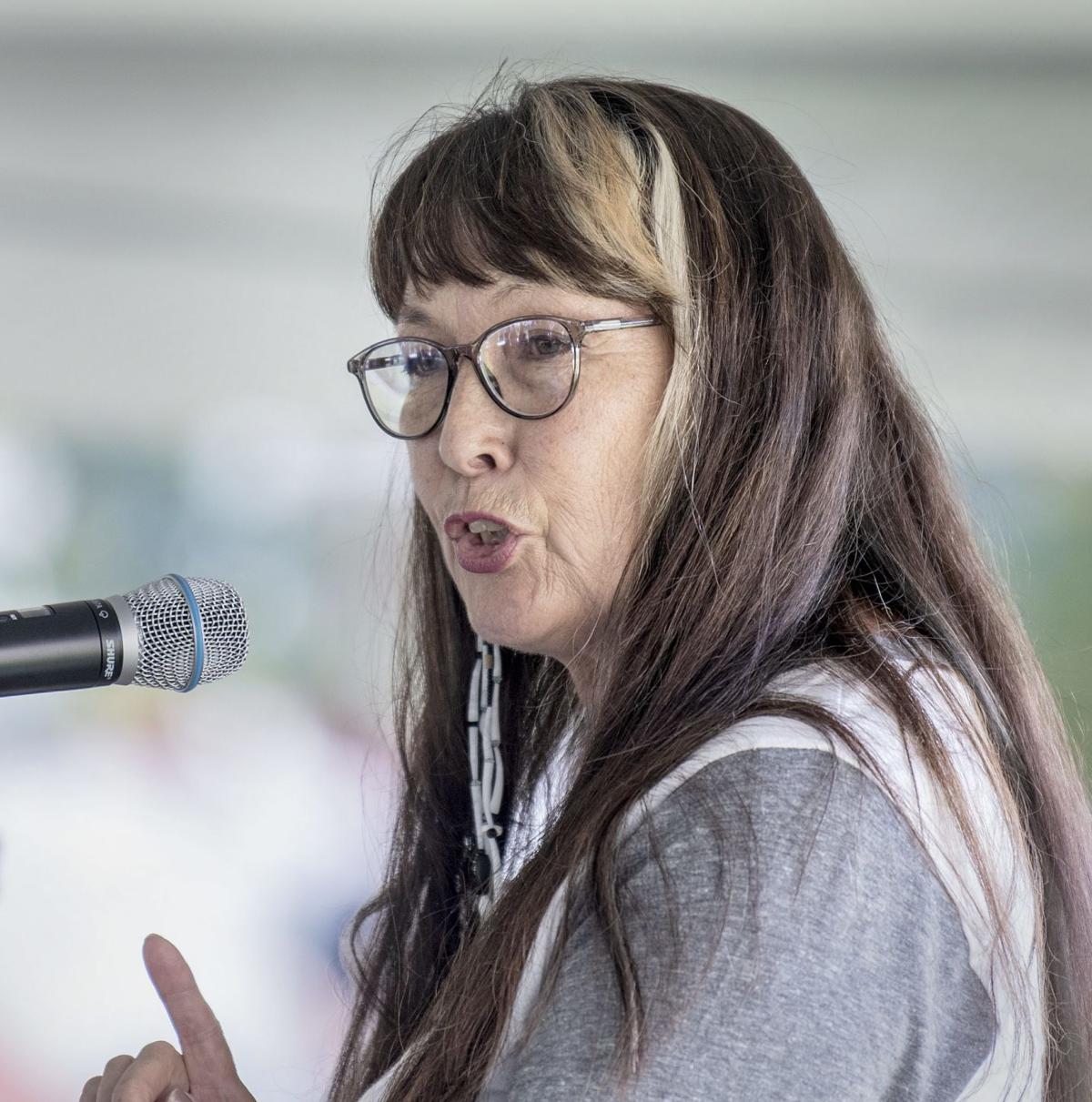 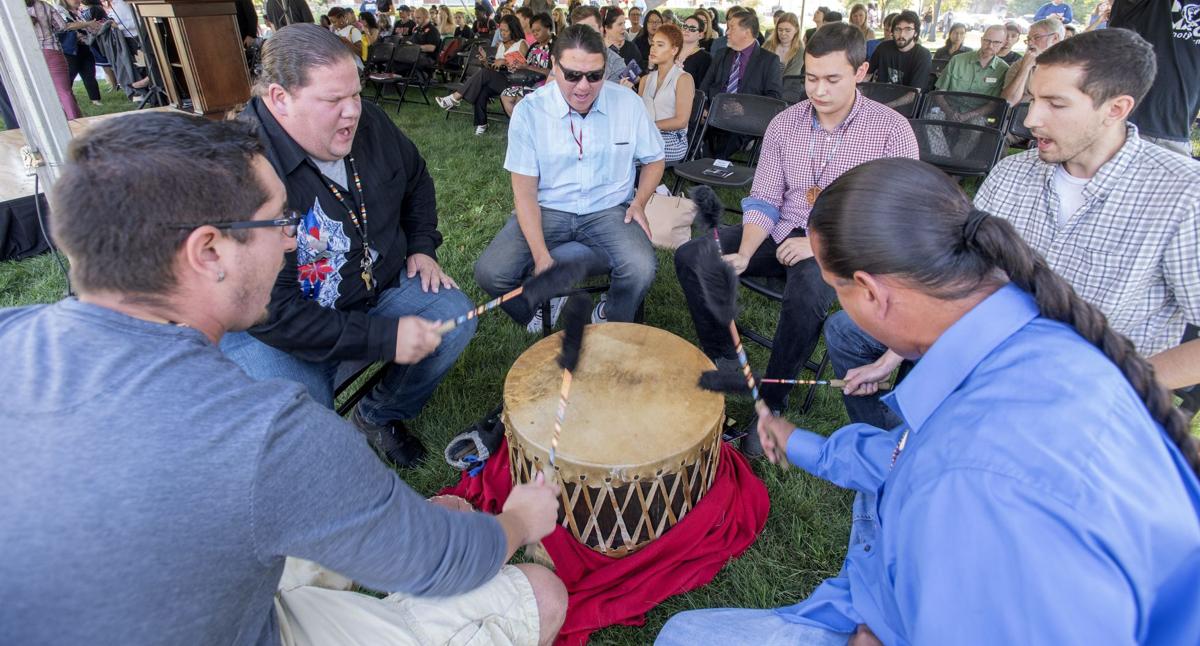 URBANA — Thirty years ago, Santa Fe artist Charlene Teters was recruited to the University of Illinois with two other Native American students to fulfill her dream of earning a master of fine arts degree.

She ended up becoming the unlikely face of the campaign to abolish Chief Illiniwek and Native American mascots, which she considers dehumanizing to American Indians.

Her efforts, which eventually led to the Chief's retirement in 2007, made Teters and her two young children the targets of threats and other abuse.

"It was a dream come true that turned into a nightmare," she said.

But on Monday, visiting the UI for the first official campus Indigenous Peoples Day celebration, Teters said there's been "a lot of progress," citing the creation of the Native American House and the rejuvenated American Indian Studies program among other developments.

"It's different," said Teters, now a professor and academic dean at the Institute of American Indian Arts in Santa Fe, who was invited to speak at Monday's event.

"My heart is full," she told the audience of more than 300 people who gathered on the South Quad.

Professor Matthew Gilbert, director of the American Indian Studies program, introduced her by recalling how she summed up her fight for "human dignity and native humanity" through seven carefully chosen words: "American Indians are human beings, not mascots."

As academic dean at the country's flagship native tribal college, Teters said she's proud to have gotten her education at Illinois and to be using it now to help teach her own people.

She said some of her memories of the UI are "painful," but she also met some "incredible mentors" and colleagues who stood with her on the front lines of the anti-Chief campaign, citing native activists Vernon Bellecourt and Michael Haney, and Jay Rosenstein, whose documentary "In Whose Honor?" chronicled her fight.

She recalled how civil rights organizer Kwame Ture asked Teters to speak before his talk at Foellinger Auditorium in 1989.

"I was really shy. It was terrifying to go out and speak in front of 1,000 people," she said. "But he said to me something that still stays with me: 'If not you, then who?'"

"I knew I had to address this issue," she said.

She said his message was that all struggles against discrimination are linked, and "when we see somebody who is targeted, or a community that needs help, we need to stand with them as allies."'

'Still have work to do'

Teters said her children had a "tough time" while they were in Champaign but they are now both adults trying to use their education to help others.

Her son earned a degree at Penn State and now works to help people with bipolar disorder or post-traumatic stress. Her daughter earned a Ph.D. in epidemiology from the University of North Carolina, studying the connection between race and the quality of health care people receive.

"Good things came out of the struggle," she said.

She said it's important for all Native Americans at the UI and similar institutions to use their educations to lift others and develop new leaders.

"We still have work to do today," she added.

Teters said later she isn't surprised the Chief debate continues, noting that alumni at Dartmouth College, which dropped its "Indians" name and mascot in the 1970s, still bring the image to campus events.

She said she was "very naive back in the day," when she started her anti-Chief protest outside the then-Assembly Hall.

"I was thinking, 'They just don't know, I'll just tell them and they'll stop doing it.' And here we are 30 years later," she said. "We know that this is a long-term effort."

'Symbol of our promise'

She called Monday's celebration "a good step in the right direction," saying it's important to acknowledge the indigenous people "whose land we occupy here." She also met with Chancellor Robert Jones earlier Monday and promised to recommend other speakers to bring to campus.

Jones said students started the tradition of celebrating Indigenous Peoples Day years ago, and the campus decided to join in this year.

"It's important for all of us to truly understand the people who came before us," Jones said, adding the campus is committed to putting native people "at the core of our educational efforts."

For too long, he said, "too many students from too many backgrounds did not find the welcoming experience they should have" at the UI.

Jones said the tree will be a living reminder of the UI's support for native students and faculty and a "symbol of our promise to be a vibrant community, inclusive to all."

A commemorative plaque will be placed by the tree, stating that it's there to "remind us of the indigenous peoples, present and past, for whom Illinois was home prior to this University's founding in 1867 and remains so to this day."