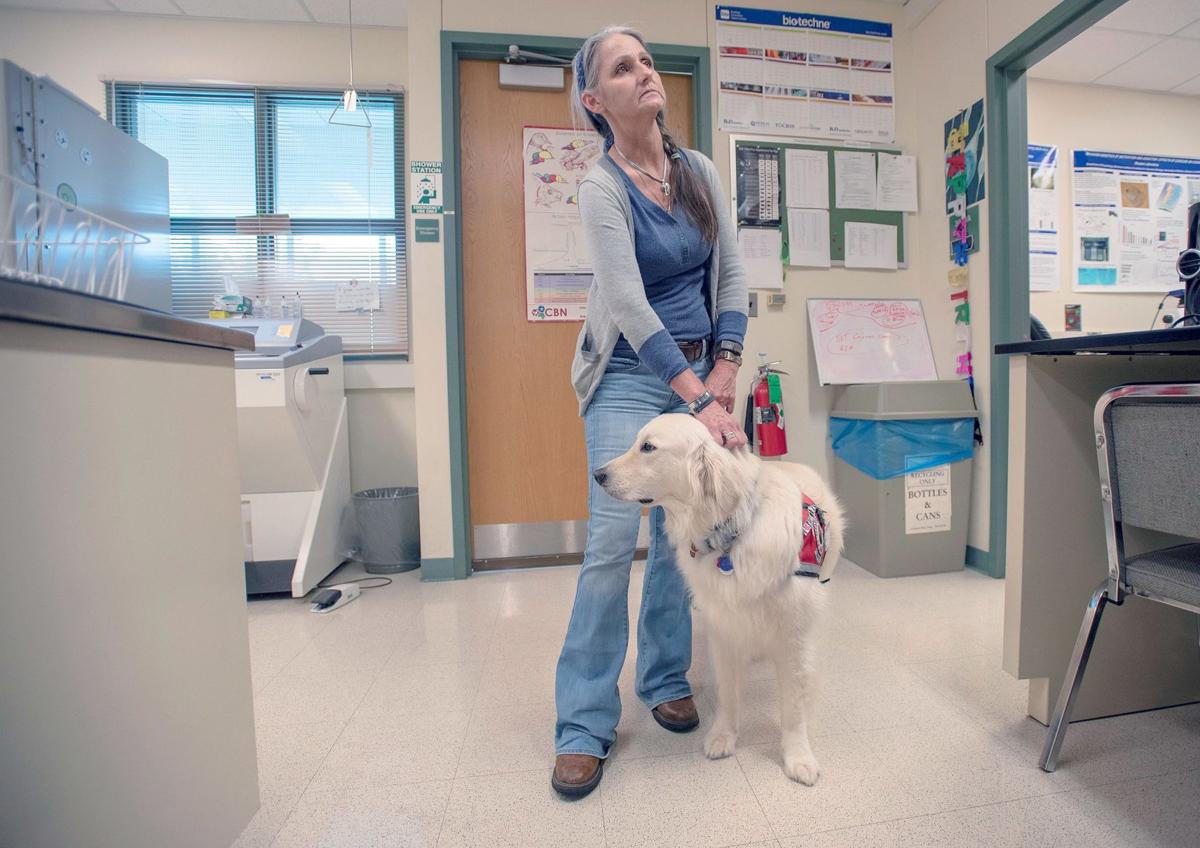 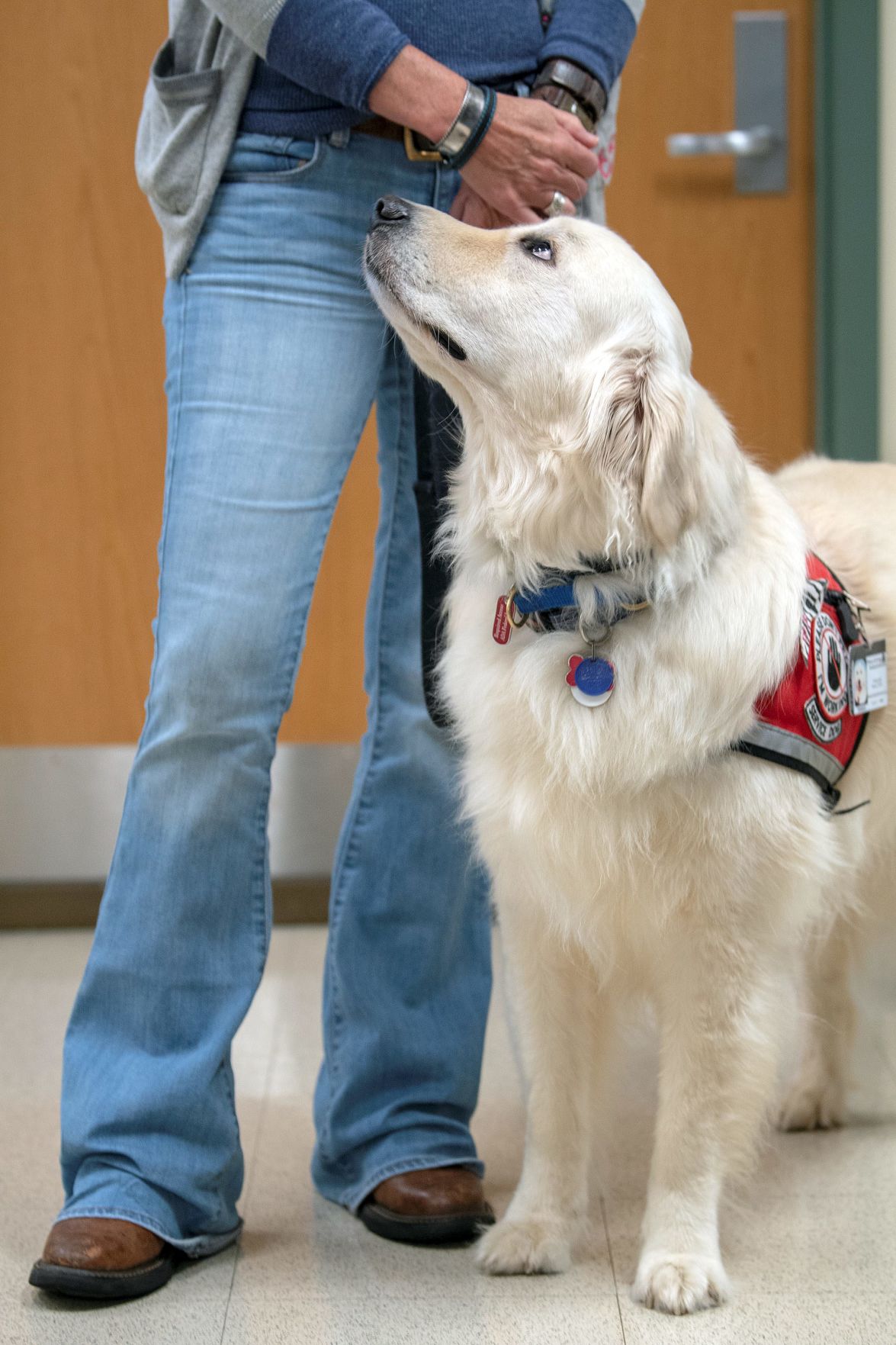 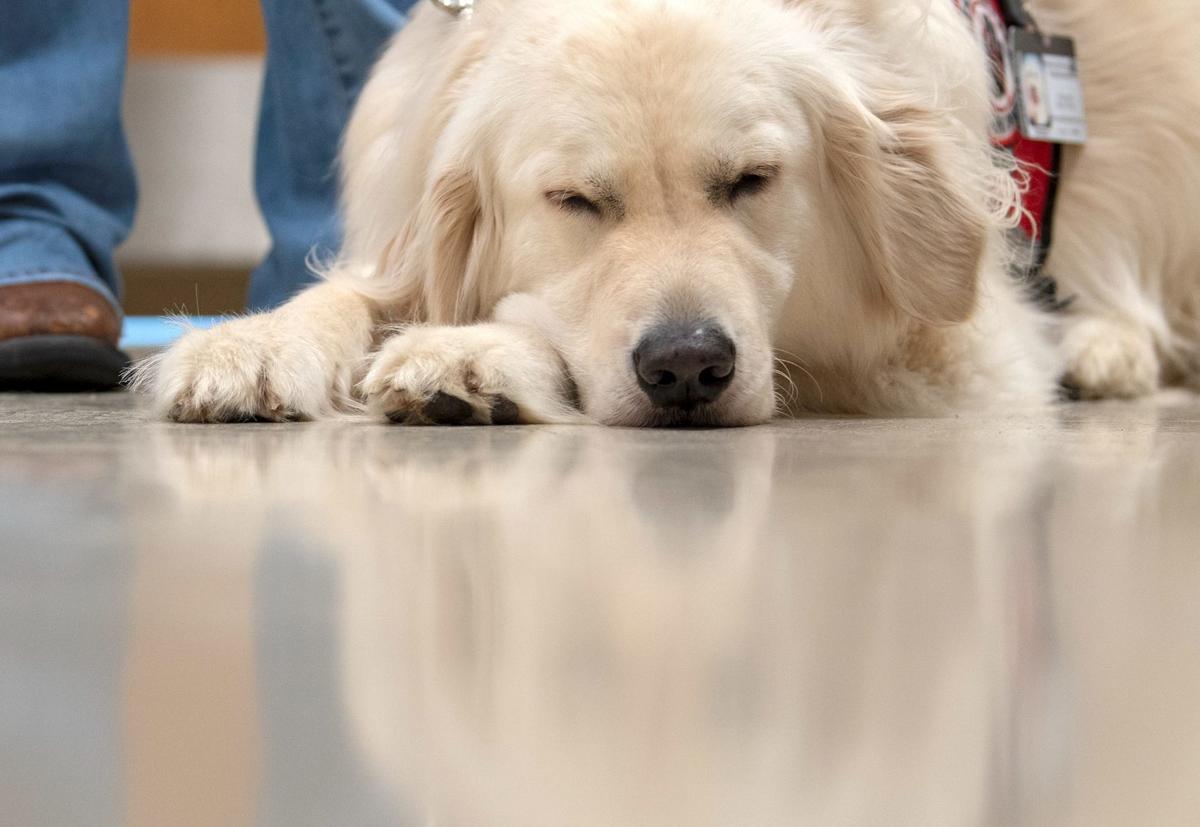 URBANA — Yes, there are lab coats, goggles and boots made for dogs.

Sampson, a golden retriever service dog, has worn them in chemistry classes with his companion, Joey Ramp, a University of Illinois student.

Even though Ramp is an undergraduate, she is doing research with Professor Justin Rhodes at the Beckman Institute.

Sampson could become part of an experiment that would help others who use service dogs to move in campus areas that have been off-limits. But so far, she has not won approval from the UI, where a committee has concerns about a new concept of dogs in labs.

Ramp has gradually gained access for her dog on the UI campus' facilities.

"I don't go anywhere without Sampson," she says.

Ramp is a senior molecular and cellular biology major who is working in Rhodes' lab. The psychologist usually works on exercise and cognitive function, but has taken an interest in Ramp's ideas.

Sampson is a working dog, and right now, work means lying on the floor at Ramp's feet. He's just been to physical therapy — his harness weighs 3.5 pounds — and looking happy to see the lab.

"One of the main features of service dogs is that they are very calm; only approximately 1 in 1,000 dogs makes the cut," Ramp says. "We walk across the Quad, and if he sees a squirrel, he doesn't react."

Service dogs can help people with diabetes and epilepsy, sometimes even before an episode.

The 54-year-old Ramp received her first bachelor's in 1995. She was badly injured when a horse fell on her in 2006, and sometimes has vertigo when leaning over; her dog can lift up objects to her.

Sampson also helps with her balance, as well as anxiety associated with post-traumatic stress disorder. She went back to college to study PTSD and help others who suffer from it.

Theo was the first service dog in the UI's history to be allowed access in accompanying their handler into a chemistry lab, according to Ramp.

"I worked for a year to gain access to the chemistry lab with Theo," she says.

Theo "wore the goggles, boots and a lab coat. He is now retired for health reasons."

Sampson was the first service dog in a biology lab class in 2017, and then in a research lab, also in 2017.

But though she can take Sampson to classes, labs with live animals have been off-limits.

Ramp is trying to change that, with Rhodes' enthusiastic encouragement.

"We have a lot of talented people that need their service dogs or have other needs," the professor said.

There are concerns for the safety of the dogs as well as lab animals, Rhodes says, but there are easy fixes. Ramp is in an independent plan of study in neuroscience. She wants to find new ways to repair injuries to the brain.

Rhodes and Ramp have taken their case to the campus' Illinois Institutional Animal Care and Use Committee twice and have been turned down twice.

That's frustrating to Rhodes as well. An experiment would see how rodents react to Sampson's presence, an important factor in decision-making.

Rhodes says he doesn't have an agenda; he just wants to know one way or another how the animals would react.

The committee referred The News-Gazette to campus spokeswoman Robin Kaler.

She reiterated the principles on which the committee makes such decisions.

Approval for research on humans and animals requires the proposed study have a strong scientific rationale, be designed to protect the welfare of the people and animals in the study, not duplicate existing research and be designed so that it is likely to produce useful data.

There's added frustration for Ramp and Rhodes because they have a two-year private grant and have bought some equipment, but will see the grant expire next year.

But mainly, Ramp says, it's important to establish that service dogs are useful and safe, because universities will be seeing more and more of them as time goes by.

But not all of them can be Sampsons.

Her dog is an award winner, and more honors may be in Sampson's future.