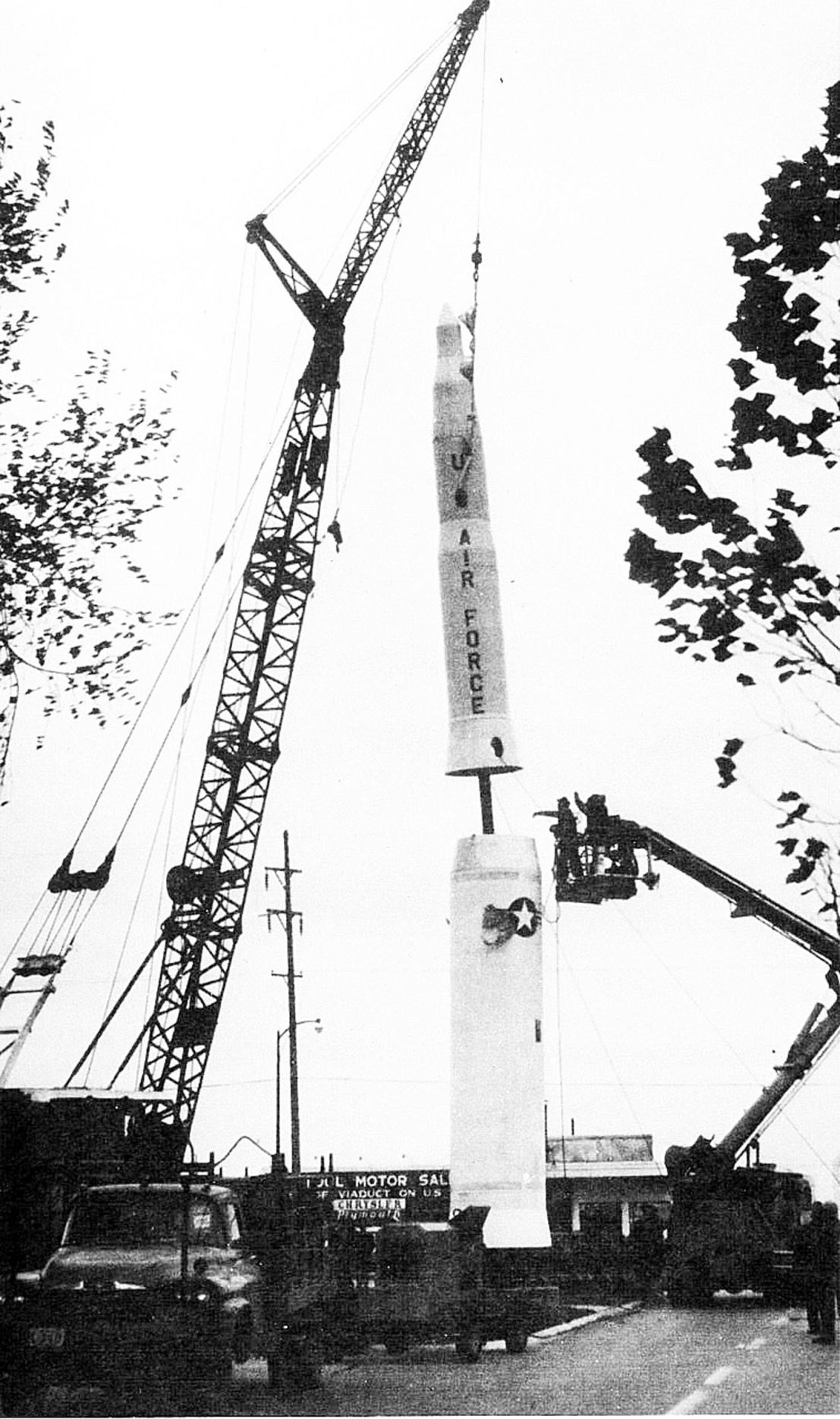 The missile being put in place at Chanute Air Force Base in 1966. 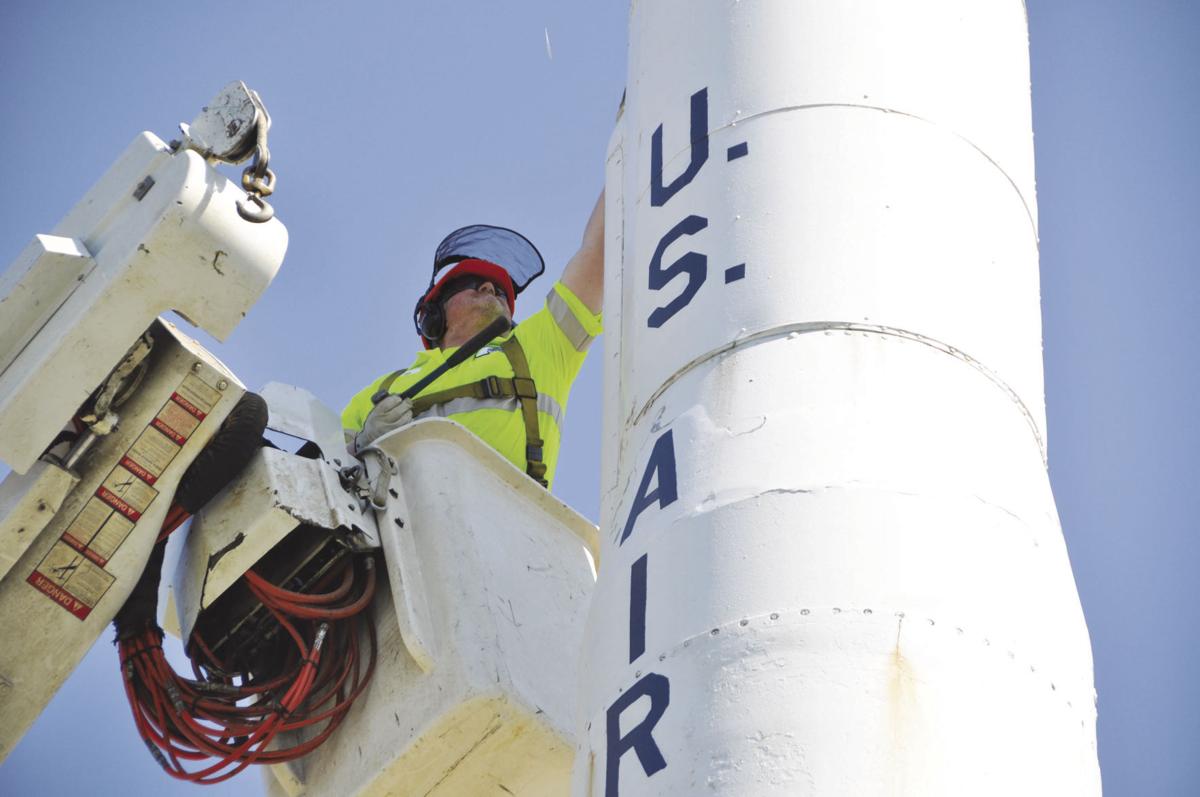 A village of Rantoul inspector examines the missile’s condition in 2018.

U.S. Congressman John Shimkus said Friday that the missile at the former Chanute Air Force base has been saved.

The director of the National Museum of the U.S. Air Force, David Tillotson, called Shimkus' office to confirm the stop work order to terminate the planned demolition contract.

"Last week I received calls from several local VFW chapters and veterans of Chanute,” Shimkus said. “I called the Mayor and City Manager in Rantoul, and we all agreed we had to work fast to preserve this important piece of Cold War history.”

RANTOUL — Mayor Chuck Smith said he has received comments “from all over the United States” about the Air Force’s plan to dismantle the missile at the former Chanute Air Force Base in Rantoul.

Among those hoping to see the missile saved are the president of an Arkansas group that plans to develop a Cold War museum and the commander of a Rantoul military veterans service association.

Smith said he hopes to convince U.S. Rep. John Shimkus (R-15) to use his influence to block the missile’s demolition.

Smith said there was “a remote possibility” the missile can be saved.

A contractor hired by the Air Force is scheduled to arrive in Rantoul Monday and begin demolition the next day.

The recent announcement the missile was on the chopping block has sparked cries to keep standing the Cold War-era symbol — placed at the west entrance to the former base in 1966. The missile has been around for 54 years. Half of that time has been the period since the Air Force closed the base in 1993.

“(The missile) means a lot to people,” Smith said. “We are hoping (the Air Force is) having a change of heart, but there are no guarantees. We appreciate people reaching out to tell us how they feel about it. But with that comes a lot of financial responsibility, as well, that the government (would have to be willing) to set aside for the reclamation of the weapon over a period of time or be refabricated to its original condition.”

Smith said the village was told in the past it could not take over ownership/maintenance of the missile because it is Air Force property.

The missile bears more than a little bit of sentimental value to those still living in the Rantoul area. It also represents a special time for individuals who formerly trained at the base in missile maintenance and fuels guidance symptoms from every branch of the military.

Barrett Harrison, president of the Blytheville Gosnell (Ark.) Regional Airport Authority, which hopes to establish a Cold War museum on the former Eaker Air Force Base, said his group is interested in the missile.

Like Rantoul, that community saw its population drop from about 28,000 to about 14,000 after the defense facility was closed in 1992.

But unlike Chanute, Eaker was at the center of the Cold War. (An East German resident who studied that period said he learned Eaker was No. 5 on the list of facilities to be bombed by the Soviet Union in the event of a war, Harrison said.)

B-52 bombers at Eaker sat at the ready loaded with nuclear bombs 24 hours a day during the Cold War. Having a Minuteman missile on display is especially attractive to such a museum, Harrison said.

He said he has found there is a great deal of interest among the general public in the history of the Cold War, which was a period of geopolitical tension between the United States and the Soviet Union and their allies from after World War II until 1991.

Harrison said he was shocked to learn the missile might be destroyed.

“That would be something we would love to have in our artifacts,” he said. “We would hate to see it dismantled. “It should be a whole lot easier for the Air Force to transfer that to us than for us to try to get one somewhere else.”

Justin Penrod, commander of the Rantoul VFW No. 6750, said he had spoken to an aide of Shimkus and an Air Force liaison in hopes of saving the missile. So far, it’s wait and see.

He said Shimkus’ aide had indicated he had spoken with the congressman “who is very interested about finding out what needs to be done to save it.”

“It would be nice to keep that around and restore it and make it last for a couple more generations,” Penrod said.

As a veterans service organization, the VFW is eligible to request a static display of decommissioned military equipment such as the missile, which would still be owned by the Air Force, according to Penrod.

“Our mission would be to maintain it, maintain the grounds and keep it standing,” he said.

“I think there’s so much love for that missile ... all around the nation. (The news of its pending demolition) has reached so many people.”

He said if the missile can be declared a landmark, government funding could be secured for its maintenance.

Smith hopes the time is not too late.