URBANA — Family attorney Steve Beckett this morning addressed last week's disclosure that Yingying Zhang’s family was told that her remains may be in a landfill in Vermilion County. 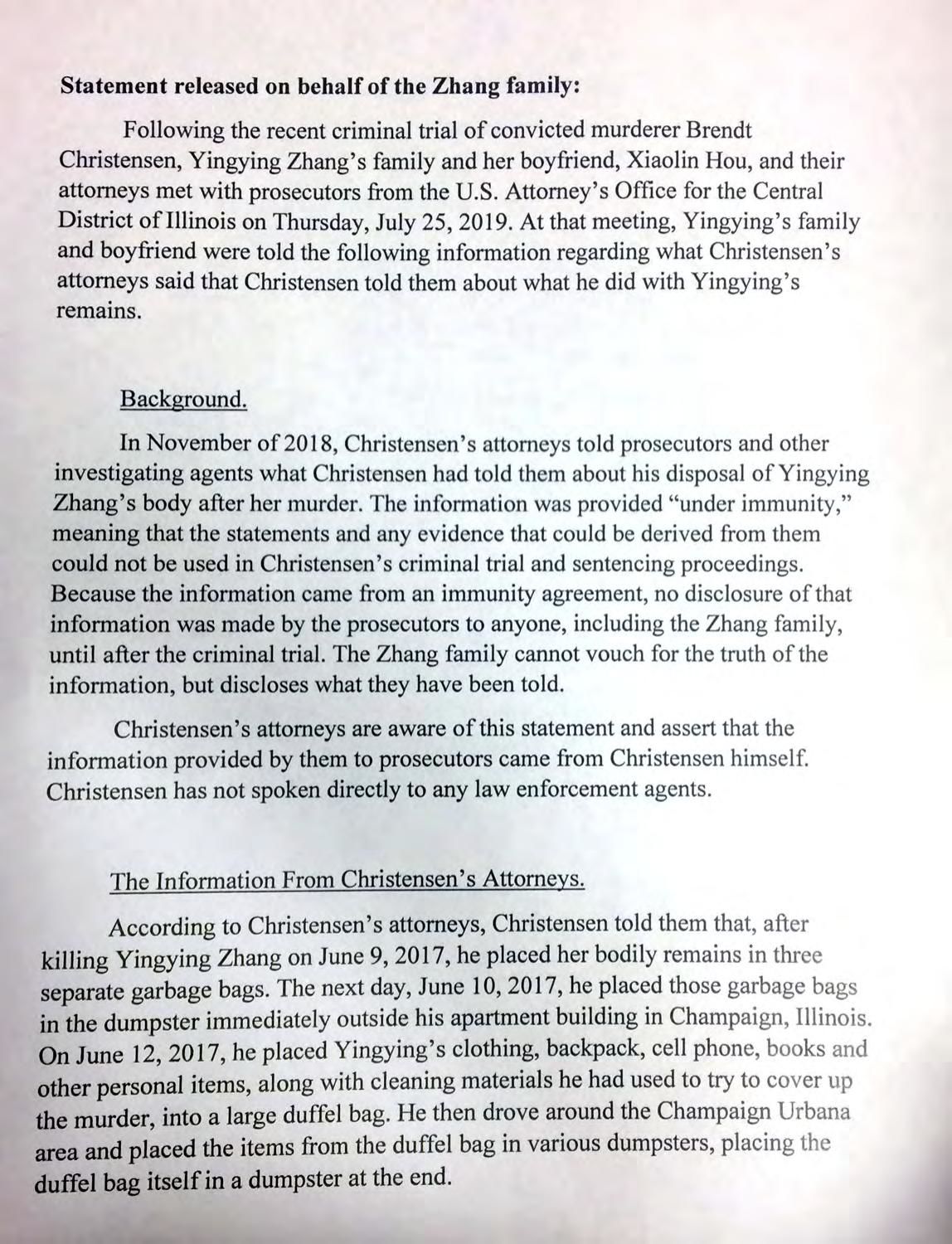 Today's news conference was high on emotion, with Ms. Zhang's mother, Lifeng Ye, bowing her head while crying and holding hands with her son.

Beckett said that today, for the first time, Le learned the details of what happened to her daughter’s remains, but it was important to her that she attended the news conference. About 30 minutes in, she left Beckett's office, overcome with grief.

“She very much wanted to be present,” he said.

Regarding the case of her convicted killer, Beckett said: “No notice of appeal was filed. That case is over. That man is sentenced to life in prison.”

The family first found out about the possible whereabouts of Ms. Zhang's remains on July 25, when prosecutors told them that Brendt Christensen had told his lawyers what he did with Ms. Zhang’s body.

Ms. Zhang’s father, Ronggao Zhang, said, “If what that man said is true, it further confirms that he is a heartless and evil person. We condemn his brutal and malicious actions and we hope that he suffers the rest of his life as he made Yingying suffer in the final moments of her life.

“We now understand that finding (Yingying) may be impossible.”

Zhang’s father said family members are “miserable” and haven’t decided if they want to stay in the U.S. and continue looking for their daughter’s remains or return to China.

— On Monday, June 12, 2017, he placed her clothes, backpack, cellphone, books and other personal items, along with cleaning materials he had used to try to cover up the murder, into a large duffel bag. He then drove around C-U and placed the items in various dumpsters, then placed the duffel bag itself in a dumpster.

— The first garbage pickup was that same day. The contents of the dumpster were compacted twice and taken to a private landfill in Danville.

— To date, no search has been undertaken to recover her remains. Because of the compactions, Ms. Zhang’s bodily remains may be very small in size.

— The portion of the private landfill that was being actively used during that time period is perhaps half a football field in length. It was determined that by the time Christensen’s attorneys disclosed his statements to federal authorities, the contents of the dumpster that contained Ms. Zhang’s remains would have been covered by at least 30 feet of garbage from later hauling.

— In November 2018, information on Ms. Zhang’s whereabouts was provided under immunity. Therefore, it could not be used in the trial or sentencing, Beckett said.

“The information was provided to the prosecution under an immunity agreement. This information came from the defense lawyers, and that information indicated that the remains, as it traced down, could be found in a landfill in Vermilion County,” Beckett said.

This morning's news conference, drew more than 30 media members from more than a dozen outlets.

Ms. Zhang's mother, father and brother were on hand as well.

A large media contingent awaiting the start of the Yingying Zhang news conference at @Beckett6Steve’s office in Urbana. New information is expected to be provided on the search for her body in a Vermilion County landfill. We’ll have more on @wdws1400 and at our website. #NGMedia pic.twitter.com/YNpyD5d1nq

A memorial church service for Yingying Zhang, the visiting University of Illinois scholar killed two summers ago, has been rescheduled for Friday afternoon.

The service, designed to offer comfort to those grieving Ms. Zhang’s death, will be at 1 p.m. Friday at the First Baptist Church, 1602 S. Prospect Ave., Savoy, according to Pastor Chuck Moore. Because of roadwork on Prospect, the church is only accessible by traveling on Neil Street/Dunlap Avenue and driving west on Burwash Avenue.

The service had been originally scheduled for Monday but was postponed late last week.

Moore said the details for the memorial service haven’t changed.

He will lead the service with prayers and meditation, along with Tim Bossenbroek, pastor of Hessel Park Christian Reformed Church. Both congregations include members of the Chinese community or international students who came to know the Zhang family, Moore said.

Ms. Zhang’s father, Ronggao Zhang, will also speak, and her brother will read a letter from her fiance, Xiaolin Hou. Other friends will also offer memories of Ms. Zhang.

The service will have both English and Chinese translations, Moore said, and a Chinese choir will sing a couple songs.

The church will open by 9 a.m. to receive any donations of flowers, he said.

The service is open to the public, Moore said.

Despite her tragically brief life, Yingying Zhang left an impact on the people who knew her.

Ms. Zhang came to the university in April 2017 as a visiting scholar with the hope of receiving her doctorate.

She was kidnapped on June 9, 2017, by former UI graduate student Brendt Christensen as she was waiting for a bus in north Urbana and later killed. Christensen was convicted in June and sentenced to life in prison without parole last month.

Despite extensive search efforts by the FBI and UI police, her body has never been found.

The family’s attorney, Steve Beckett, said last week that prosecutors have told the family that her remains may have been taken to the Vermilion County landfill. Beckett has scheduled a press conference for 10 a.m. Wednesday to discuss more details.

Yingying Zhang's family: 'When we find her, we will leave'

Even as the family of Yingying Zhang acknowledges the near impossibility of her remains ever being found, an attorney working with them said those investigating her death haven't closed the book on a recovery attempt at a landfill in Danville.