A group of friends prepares to tee off on the first hole at Lake of the Woods golf Course in Mahomet on Wednesday. They said they usually golf here and at Savoy. 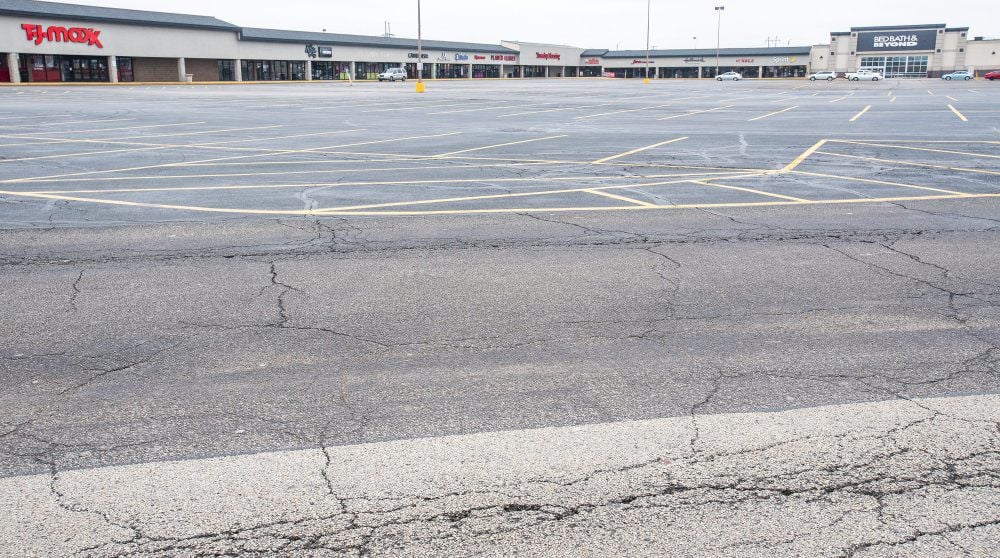 The empty parking lot by Bed Bath and Beyond and TJ Maxx in Champaign on Tuesday.

Have a story to tell? Email news@news-gazette.com.

The four include two men in their 70s, a man in his 50s and a woman in her 80s, Pryde told The News-Gazette.

No further details were divulged about their condition.

In an effort to help the state economy during the COVID-19, Gov. J.B. Pritzker announced at his afternoon briefing that Illinois will delay the state tax-filing deadline from April 15 to July 15.

For the first time, Douglas County reported a positive test. There are now 1,865 cases in 35 counties.

The two Stateville correctional officers are recovering at home and the individual who is incarcerated is isolated and recovering in the hospital.

Those who have been identified as being potentially exposed are being quarantined and the facility is on a 14-day lockdown, state officials added.

Mahomet’s Lake of the Woods is open for golf — with a few twists.

There are no carts to ride, no tee times to book, no flags to pull from greens and no rakes to smooth out the bunkers.

Once they arrive on site, golfers are asked to dial the pro shop and give their first and last name.

“We’ll look out the window and kind of give them a wave as they go to the first tee,” Lake of the Woods pro David Sebestik told Brian Barnhart on this morning’s edition of “A Penny for Your Thoughts” on WDWS 1400-AM.

For the time being, Lake of the Woods will have slightly reduced hours, with the course opening at 8 a.m. and closing around 6 p.m.

Golf courses aren’t mentioned specifically on the long list of “essential” businesses in Gov. J.B. Pritzker’s stay-at-home order, which led to discussions Tuesday between the Illinois PGA and governor’s office.

After initially being told they couldn’t operate during the COVID-19 pandemic, state golf courses were given the all-clear, so long as they adhered to social-distancing requirements and put in place the aforementioned restrictions.

HOW TO REPORT BUSINESS VIOLATORS

If you know of a business or organization not considered “essential” that’s violating Gov. J.B. Pritzker’s statewide stay-at-home order, you can call the Champaign-Urbana Public Health District hotline at 217-239-7877 or send an email to coronavirus@c-uphd.org.

If the business/organization is found in violation by the health district, officials said today, the district will “encourage” it to “ voluntarily comply with” the governor’s executive order.

If the business/organization doesn’t comply, the health district will issue the organization a cease-and-desist order, as it did in at least one case this week.

Then, the health district "and local law enforcement will verify compliance," officials said. "If the business or organization is still not in compliance, the violation will be referred to the State’s Attorney’s office for consideration of prosecution."

Pritzker’s order exempts dozens of industries, from laundromats to hardware stores. It also requires businesses and organizations to use social distancing requirements.

“In Champaign County, businesses and organizations are encouraged to cooperate and voluntarily comply with the terms of the order, in the interests of their employees, customers and the community as a whole,” read a joint statement today issued by the health district, the Champaign County Sheriff’s Office and the Champaign County Emergency Management Agency.

The DeWitt-Piatt Bi-County Health Department reports that 23 people have been tested for COVID-19 in the two counties. Eighteen came back negative for coronavirus, and five are still pending.

In Piatt County; 10 people have been tested. Eight were negative and two are pending.

Starting Monday, the Douglas County Courthouse in Tuscola will be closed to the general public through April 10, our Mary Schenk reports.

Certain cases will be dealt with by court employees on an emergency basis such as orders of protection, arraignments, juvenile, marriages.

County board members, lawyers, judges, attorneys or anyone who has an appointment with someone in the courthouse that has given court security 24 hours notice may be admitted.

It’s best to call ahead to be sure your presence is required.

BALLOONS OVER VERMILION CALLED OFF

Tim Ditman of WDWS 1400-AM reports that the coronavirus has grounded the hot air balloons this summer in Vermilion County.

In one of the furthest-out cancellations due to the pandemic, organizers of Balloons over Vermilion have scuttled this year’s event, which was scheduled for July 10-11 at Vermilion Regional Airport in Danville.

Event co-chair Pat O’Shaughnessy said no one knows when life will get back to normal. So organizers can’t plan the way they need to.

O’Shaughnessy said sponsors who have paid can get a refund or apply their contribution to the 2021 event.

He said last year’s event drew more than 25,000 people to Danville from all across the country.

O’Shaughnessy said officials couldn’t postpone the event because there are no other dates that line up with the balloon pilots’ schedules.

ALL QUIET AT RANTOUL PD

Rantoul police have seen their calls and arrests drop substantially in the approximately two weeks since the threat of COVID-19 became more pronounced in this country.

“We have, to this point, seen a reduction in calls for service,” said Police Chief Tony Brown, who estimated incidents were down about 50 percent.

The reason: “Just because people are staying inside,” he said.

Despite people spending longer periods together indoors when cabin fever and monotony can mount, Rantoul police, to date, have not seen an increase in domestic incidents.

“I don’t think we’ve seen that at all,” Brown said.

This new world has meant a change in procedures for law enforcement. Brown said Rantoul police have adjusted to how they are responding to calls for service.

“Any high-priority (calls), we’ll continue to handle if someone’s being threatened or in danger; or if there is a crime in progress, we’ll still respond as normal,” Brown said. “If we have lesser-priority calls ... we’ll try to handle most of those over the phone to limit exposure.”

— Willard Airport’s TSA precheck registration period, scheduled for April 6-10. “Once it is safe,” officials said, “we will reschedule the event.”

— Walk-in blood donations at Community Blood Services of Illinois. You must now book an appointment to get in.

— The next Urbana Traffic Commission meeting, scheduled for April 1, 2020.

No further details were divulged about the condition of the woman, the fourth person to test positive in Champaign County.

Officials had said, when announcing Champaign County’s three prior cases, that the people were in isolation and recovering.

— The state death toll rose by four Tuesday, to 16 — all were in Chicagoland and ranged in age from their 50s to 90s.

— Thirty-two of Illinois’ 102 counties now have confirmed cases, with Grundy County added to the list Tuesday.

Administrator: “We practice our pandemic plans, we all know each other. We have lots of providers and the UI."

Coronavirus response | Back to square one: TP scarce but not nonexistent at area stores

As of midday Tuesday, an informal News-Gazette survey found just 16 of 49 grocery stores and pharmacies in the five-county area had more than a single roll or pack of the coronavirus pandemic's most-hoarded supply left on their shelves.