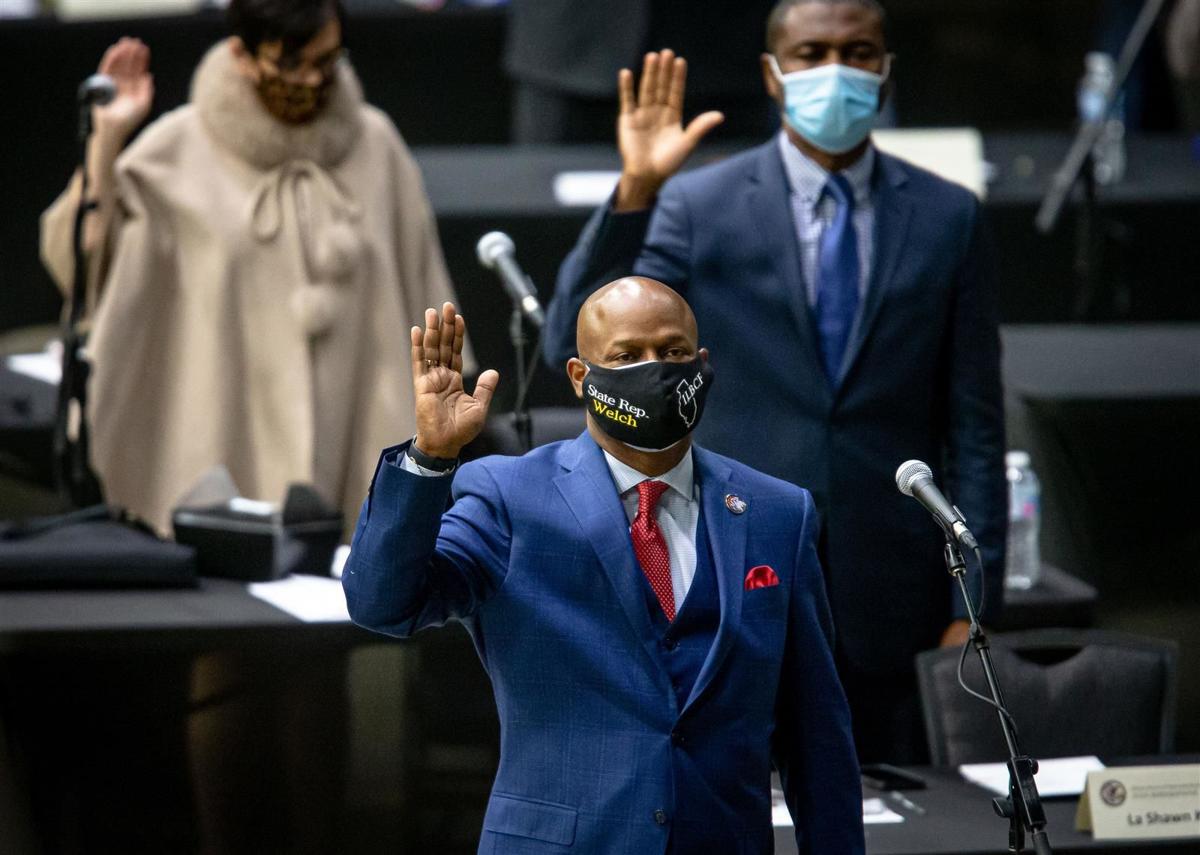 Rep. Emanuel “Chris” Welch, D-Hillside, joins lawmakers at their desks as they are sworn in for the 102nd General Assembly on Wednesday at the Bank of Springfield Center. 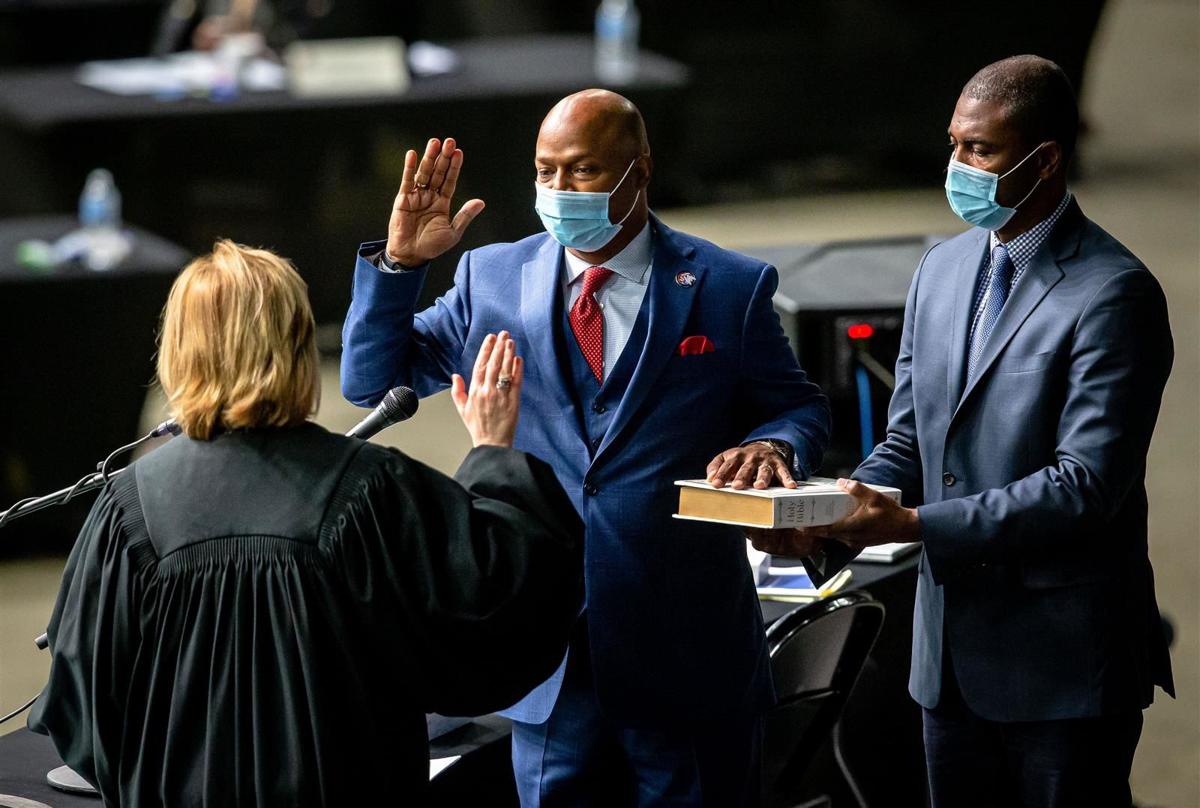 Rep. Emanuel “Chris” Welch, D-Hillside, takes the Oath of Office to become the House speaker for the 102nd General Assembly for the Illinois House of Representatives on Wednesday at the Bank of Springfield Center. 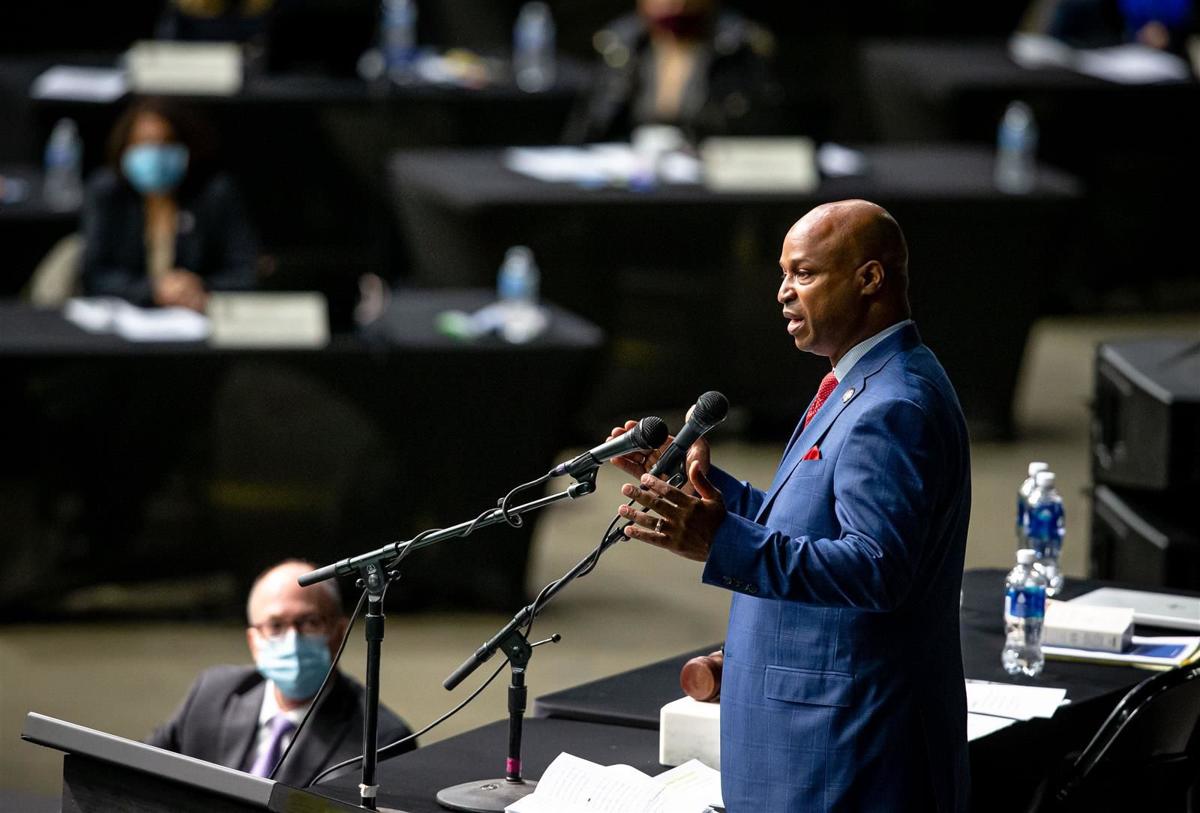 New Illinois House Speaker Emanuel ‘Chris’ Welch, D-Hillside, speaks after being sworn in Wednesday at the Bank of Springfield Center. 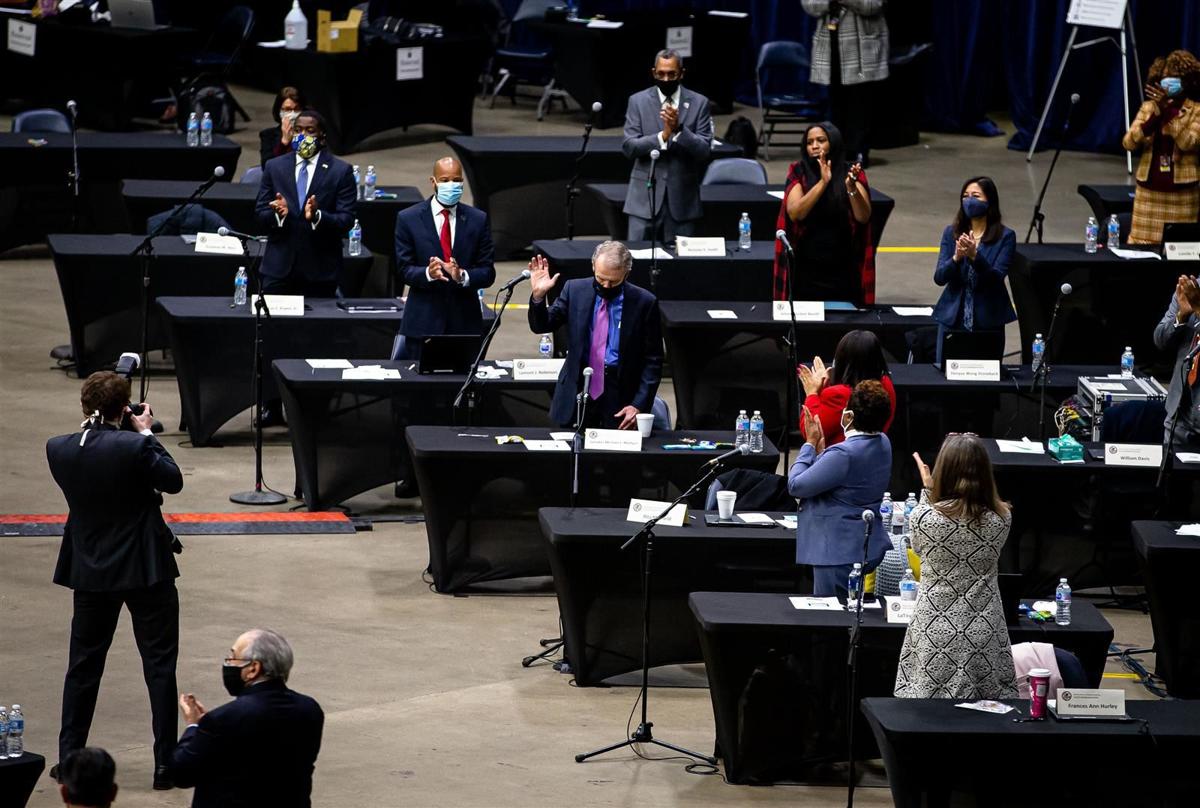 Among the scenes at Wednesday’s first session of the 102nd Illinois House of Representatives at the Bank of Springfield Center: Legislators gave longtime former Speaker Michael Madigan of Chicago a standing ovation, left, just before fellow Rep. Emanuel ‘Chris’ Welch was elected and sworn in as his successor, right.

SPRINGFIELD — One of the most transformative six-day periods in the history of Illinois government came to an end Wednesday with the election of Rep. Emanuel “Chris” Welch, D-Hillside, as the state’s House speaker — the first Black man to hold the title.

Equally groundbreaking was the fact that Welch unseated state Rep. Michael Madigan, D-Chicago, the nation’s longest-serving legislative leader, who had been speaker for all but two years since 1983.

Welch sought a unifying tone in his first floor speech as speaker, telling his fellow lawmakers that “today will be the last time I talk about us as Democrats or Republicans.”

“We will need to work together to make difficult decisions, folks,” he said, receiving applause from Republicans.

“Let’s get ready,” he said. “Because we are going to have to make some difficult decisions to control spending while we protect our most vulnerable residents and while we ensure schools receive the funding that they need.”

After the floor speech, Welch said during a news conference he had not had time to digest the historic events that led to his speakership. The House adjourned its Tuesday session at 4:14 a.m. Wednesday and reconvened to pass a massive criminal-justice reform bill and certify Welch as speaker just hours later.

The 22 members of the Black caucus urged him to run for speaker in a closed-door meeting Tuesday, Welch said, and he had no plans to do so before their urging.

All but one of those members — Rep. Maurice West of Rockford — had supported Madigan on the first closed-door ballot between Democrats over the weekend. In the end, they provided the backbone for Welch’s late push after Madigan suspended his campaign and Welch built a broader support coalition than three other challengers — Reps. Ann Williams, D-Chicago; Stephanie Kifowit, D- Oswego; and Kathleen Willis, D-Addison.

West rose to nominate Welch for speaker on the floor of the Bank of Springfield Center, which served as the House chamber this week amid COVID-19 concerns.

“We are walking in uncharted territories, with COVID-19 still running rampant through our communities, a major budget crisis, a (legislative) remap, all while immediately following the huge footsteps and monumental legacy of Speaker Madigan,” West said, later calling for a standing ovation for Madigan. “But I firmly believe that Welch did not choose this moment; this moment chose Welch, because he has the wherewithal to convene the great minds within this caucus, so that we could tackle these issues together.”

Welch’s election did not receive the backing of every Democratic member in the House. Reps. Kelly Cassidy, D-Chicago, and Lance Yednock, D-Ottawa, voted present.

Cassidy later issued a statement saying diversification of leadership in Illinois should be celebrated, but she called for a “vigorous review” into allegations against Welch that were outlined in a Chicago Tribune article in the waning hours of his run for speaker.

The Tribune cited a 2002 police report from Hillside that accused Welch of slamming an ex-girlfriend’s head into a kitchen countertop numerous times after she called him “a loser.” The Tribune said the woman elected not to press charges after talking it over with Welch’s relative, according to the report.

Welch denied the allegations at the time, according to the Tribune report. He also issued a statement this week when confronted with the allegation.

“This verbal argument occurred nearly two decades ago,” he said in the statement. “I will be honest that I have reconciled with the individual since that night. In fact, after our dispute, we sought out the authorities ourselves. Their family lives in my district and are proud supporters of my public service and work.”

Cassidy said in her statement that she respects Welch and considers him “a good man,” but she reserved her vote “because at the same time that we’re ending years of scandal over allegations of sexual harassment and corruption, we have also just been made aware of troubling allegations from Speaker Welch’s past.”

“He has denied each allegation, and we certainly have seen plenty of examples of Black men being wrongfully accused,” she said. “I feel strongly that I have been too outspoken on issues of sexual harassment and domestic violence to simply ignore these questions.”

Asked about the allegations after his election, Welch said he did not see a need to go beyond the statement and respected the privacy of the individuals involved.

“And I think my life’s work here in the legislature shows my respect for women,” he said.

As Cassidy referenced, Madigan’s decadeslong vice grip on power as House speaker and Democratic Party of Illinois chairman was weakened in 2018 amid a sexual harassment scandal that led to the firing of several top aides from his administration, including his longtime chief of staff.

Madigan was further weakened last year when he was named in a court document by utility giant Commonwealth Edison. The company admitted to a yearslong bribery scheme aimed at influencing Madigan by providing jobs to his associates.

Welch and Minority Leader Jim Durkin, R-Western Springs, both made statements Wednesday that they were willing to reach across the aisle, and they noted they live about 5 miles from one another.

But rifts in their relationship scratched the surface Wednesday in their floor remarks and in news conferences following the vote.

Durkin, prior to Welch’s election, accused Welch of being an extension of Madigan, and he has been critical of Welch’s handling of a House Special Investigating Committee into Madigan’s ComEd ties. Republicans called that legislative committee after accusing Madigan of conduct unbecoming of a legislator. Welch chaired the committee, not requiring Madigan to testify and voting to end it after only three hearings in four months.

Durkin repeated again Wednesday that Welch, as chairman, “did a disservice to the body” and called the process “an embarrassment.”

While Welch thanked Madigan, Durkin, who is now the longest-serving legislative leader in Illinois having served in the post since 2013, said he did not “have anything positive to say” about Madigan, calling government institutions “better off” with him out of leadership.

Welch was more laudatory, although he later alluded to potential changes to the committee process and leadership from the previous practices of Madigan’s administration.

“While our state has many problems, our schools are better, more children have access to health care, and our working class families can more easily live the American dream thanks to the strong leadership of Speaker Madigan,” he said.

The new speaker and minority leader will also have to get past their disagreements with how the process played out over the previous six days in the General Assembly — Democrats frequently cut off floor debate in an effort to pass a sweeping Black Caucus agenda and other major reforms before the clock ran out and new lawmakers were seated.

“Speaker Madigan ran through a number of bills that were not well thought out,” Durkin said. “Despite the statements on the floor that these issues have been around for a long time, every one of these major bills that were passed have a cost tag to them ... and many of them were dropped on us last night without any negotiation.”

Both suggested they are willing to move forward more collaboratively.

“I’m hopeful that he will see by my actions that today is a new day, a new opportunity to develop a new relationship in this space and we’ll go from there,” Welch said of his relationship with Durkin.