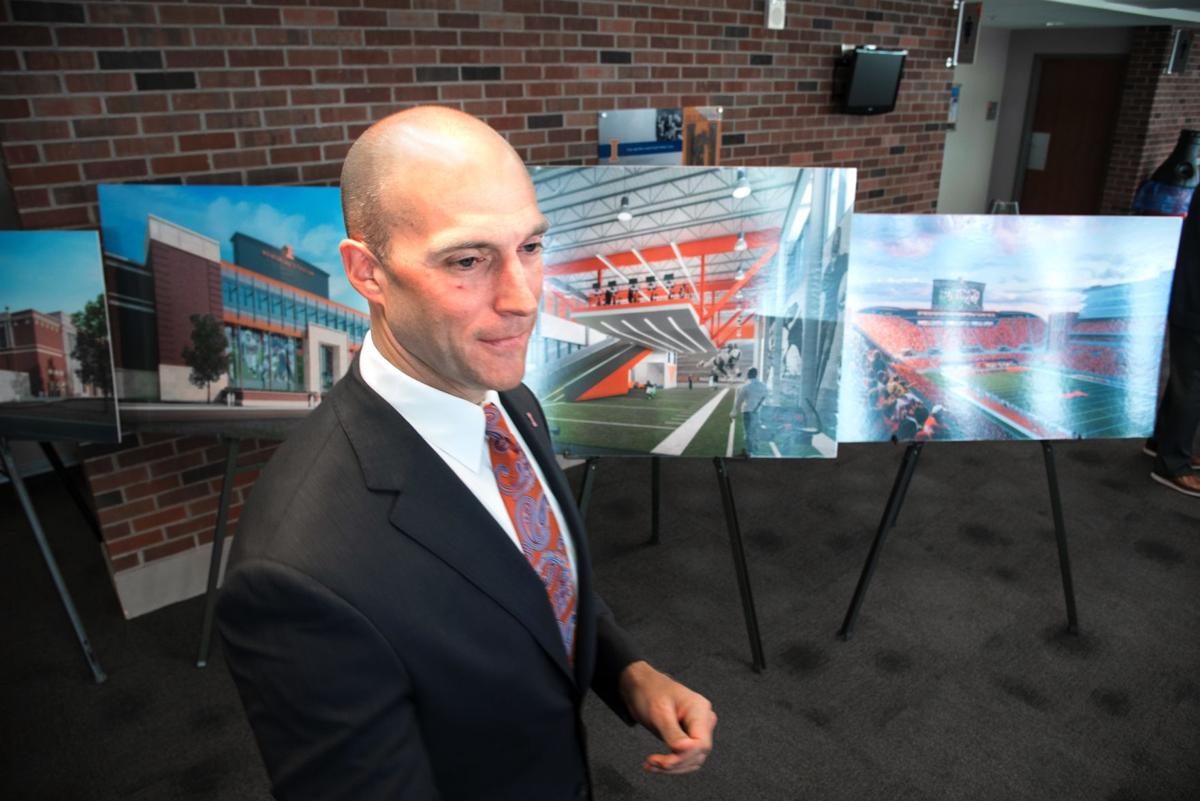 CHAMPAIGN — University of Illinois students are still paying about $3 million a year for the last big Memorial Stadium renovation project that wrapped up in 2008.

And they're chipping in roughly $2.1 million a year for the $170 million State Farm Center project that's still underway.

But the latest installment in a 10-year, more-than-$400-million investment in football and basketball facilities will use no money from tuition, student fees or taxpayers, athletic director Josh Whitman promised Monday.

"We think that's important given our climate today," he said.

The cost of the project — $132 million to revamp the south end of Memorial Stadium and update seating and amenities on the east side — is about two-thirds of the $190 million budget hole the campus faces after two years of partial state funding.

How will athletics pay for it? With gifts, ticket sales, sponsorships, licensing revenue and Illinois' growing pot of money from the Big Ten television contract, Whitman said Monday.

The Division of Intercollegiate Athletics already has several "seven-figure commitments" for the project, though Whitman wouldn't provide details Monday.

Whitman said a corporate donor isn't necessary for the football project, but "all ideas are on the table." State Farm is covering more than a third of the basketball arena renovation, with $60 million over 30 years.

What's not on the table, Whitman said, is corporate naming rights for the stadium.

"We would never put a corporate name on the football facilities. It'll always be Memorial Stadium, it'll always be Zuppke Field," he said. "But if there are other ways we can involve corporate partners, then we'd certainly be happy to consider those."

Whitman wouldn't say how much of the project he hopes to cover with donations but said the department has received several recent commitments.

"Whether it's our football alumni, people who have played the game in the past, or just other people who have spent a lifetime coming to Memorial Stadium and cheering on the Fighting Illini, we've seen a lot of great interest in this project," he said.

The project was conceived a decade ago, before the $121 million project that revamped the west and north portions of the stadium. The campus completed a feasibility study for part two last year, and Lovie Smith's hiring last spring accelerated the timeline, Whitman said. He discussed the project with Smith when he flew to Tampa to lure the coach to Illinois.

The buzz around the program "made the project much more viable in the eyes of our athletic program as we put together the financial models and how we were going to pay for it," he said.

The growth in the lucrative Big Ten television contract, which is estimated to be $50 million per school this year, didn't hurt.

"It does give us some flexibility to tackle a project like this now," he said.

New chancellor: 'I support it'

As with any major construction project, athletics will pay the up-front costs by selling bonds — a form of long-term debt like a mortgage — and repay that debt over time with athletic income. Potential sources are ticket revenue, sponsorship income, Big Ten money or donations.

"We feel comfortable. We've been very conservative in our financial modeling," he said.

Student fees will continue to go toward the specific projects for which they were approved, Whitman said.

In 1997, over student objections, UI trustees tacked a $34-a-semester increase onto the general fee to take over debt service payments on an $18 million renovation of Memorial Stadium. At the time, the debt payments totaled $1.2 million annually, and the move was seen as a way to balance an athletic budget that was $1.3 million in the red. Those bonds were scheduled to be paid off in 2022, and administrators said at the time the fee would expire then.

However, that $34 fee was tapped as one of several sources of revenue — along with concessions, ticket surcharges, club seating, etc. — to repay bonds for the more extensive $121 million stadium renovation completed in 2008. Those bonds extend through 2036.

UI trustees, which must approve any contracts over $2.5 million, will be asked to sign off on the new project next spring, officials said. The UI issued a request for proposal for architectural services in mid-September, with submissions due on Friday. The university will then choose a firm to complete plans and drawings.

Chancellor Robert Jones said the expansion is critical to advancing the athletic program, for fans, students and athletes, and he hopes it's viewed positively by legislators and supporters.

"It's been very well-thought-out, and I support it," he said. "I'm sure there will be people who will not agree or think that this is the best use of resources regardless of where the funds come from."

History Professor Mark Steinberg, a member of the Senate Executive Committee, said many faculty in programs like his, which depend on university resources rather than outside grants, aren't convinced athletics is truly self-sustaining.

Steinberg, who regularly teaches athletes in his classes, would prefer that athletic income be used not to expand stadiums but "sustain the academic side of the university," which benefits athletes as well.

Whitman said the project is an investment in student-athletes and will help ensure they have what they need to compete "at the highest level." He said coaches are already using preliminary drawings of the project for this year's recruiting class.

The project has an aggressive timetable, with work on the south end zone to be completed in time for the 2019 season and the east side renovations done by summer 2020.

About $90 million to $95 million will be spent on the south end, known as the horseshoe, which will include a new south grandstand and a home for all football operations — locker rooms, training and sports medicine facilities and recruiting venues. The rest will be used to add new restrooms, concession areas and elevators on the east stands, as well as new accessible seating.

Whitman said the overall capacity of the stadium shouldn't change much, though the east side may lose a few seats and the south end may gain some. He said it's possible ticket prices could see a "nominal" increase.