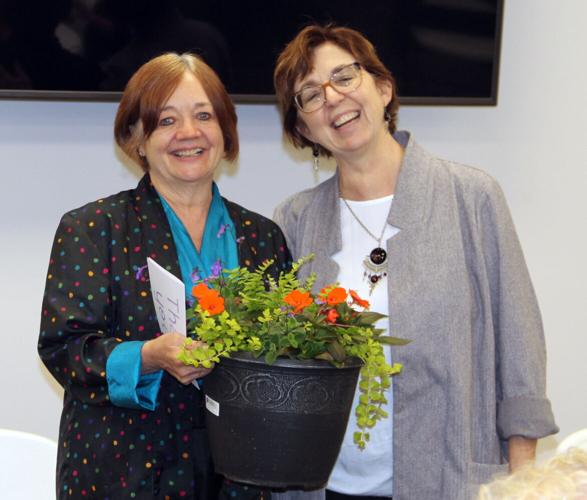 The Toast of Champaign chorus has been directed for the past 42 years by Jackie Compton, left, shown with team leader Minta Herold.

The Toast of Champaign Sweet Adelines chorus during a spring rehearsal. The practices are on Tuesday nights. 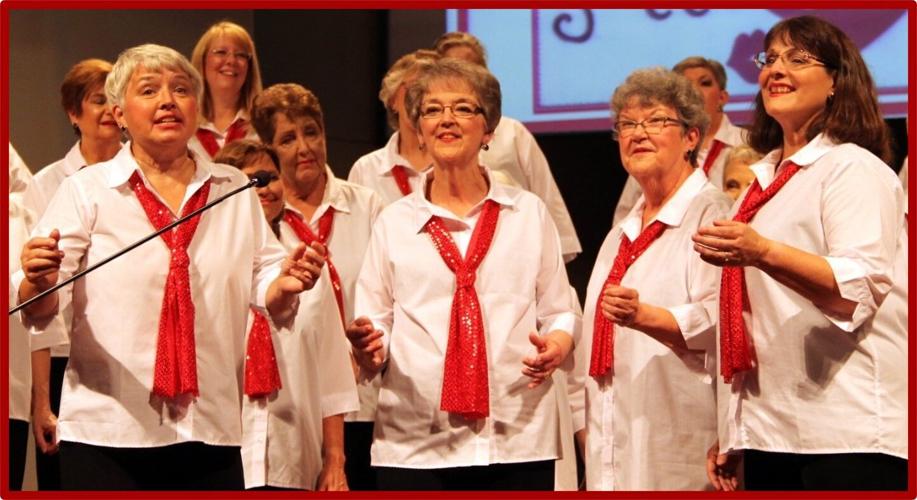 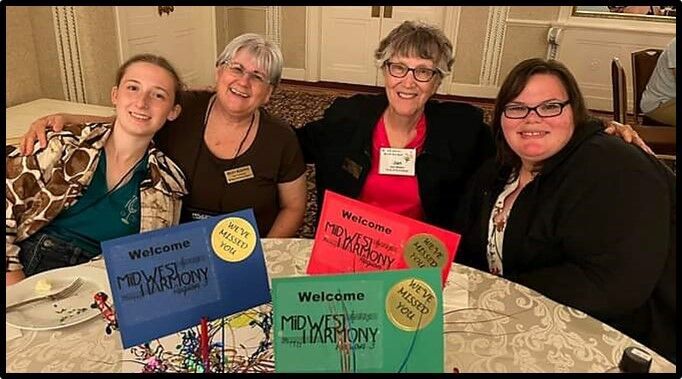 The Toast of Champaign chorus has been directed for the past 42 years by Jackie Compton, left, shown with team leader Minta Herold.

The Toast of Champaign Sweet Adelines chorus during a spring rehearsal. The practices are on Tuesday nights.

Seventy years of anything is unique. And special.

For married couples, it is celebrated with platinum, which is known for its durability.

Durable is the perfect word to describe the Toast of Champaign Sweet Adelines chorus. The locally based group recognizes its 70th anniversary with a performance at 2 p.m. Oct. 29 at Champaign’s Faith United Methodist Church, 1719 S. Prospect Ave. The public is welcomed, with tickets priced at $15 for adults and $12 for kids.

The show is being called a “Toast to the 70s,” a nod to the calendar age of the group.

There will be photos at the event from past competitions with some of the costumes on display.

During performances, the singers dress the same and have the same four-part harmony as men’s barbershop quartets, though the arrangements are different.

“Some of the wives wanted to do it,” longtime Toast of Champaign member Jan Weber said.

Seven to eight countries compete at both the regional and international level. Sweden has dominated in recent years.

“They have to compete in English because barbershop harmony is one of the very few types of music that came from America,” Weber said.

There are many more chapters in the United States than in other countries. Worldwide, there are more than 16,000 members with 800 registered quartets and about 500 chapters.

The U.S. is divided into regions, with the Champaign group part of an area that stretches as far north as Appleton, Wis. Champaign is at the southern tip of the region. Chicago choruses are also in the region.

The most recent international competition was held in Phoenix.

The Champaign chapter started in a similar fashion, with local members forming a group that has numbered as many as 40 to 45. The current group has 30 singers.

“They come from all over,” Weber said.

Weber has been a part of the Toast of Champaign for 50 years. And she isn’t the longest-tenured singer.

The age range of the performers goes from a teenager to one in her 80s.

There is no men’s barbershop group in Champaign. While there was one, it disbanded several years ago, and Weber said now the closest men’s group is in Bloomington.

How does it work?

When you see the term “barbershop,” you immediately picture four singers together. And there certainly is some of that with the Toast of Champaign.

“At our concert, most of the songs will be sung by the entire chorus,” Weber said.

There will also be five a cappella quartets who perform individual songs as well.

At the competitions, there are contests for both the quartets and choruses. The more, the merrier.

“When people think about barbershop harmony, they think of “The Music Man” and “Down by the Old Mill Stream,” Weber said.

The Toast of Champaign group covers some of the standards. But also has an Illini medley and performs Broadway songs and an armed-forces medley.

“That’s one of the things I like about barbershop is it has such a wide variety of songs,” Weber said.

Not everyone in C-U knows about the group. Weber is hoping to spread the word.

The group will make an appearance on WCIA’s morning show the week of the concert.

The performance on Oct. 29 will last two to two-and-a-half hours. Weber intentionally scheduled the concert on a day when the University of Illinois football team didn’t have a home game.

Jackie Compton, who lives in Sidney, is the director of the Champaign group and has been in charge for 42 years. Her sister sings in the chorus, and her late mother did as well.

“It was a real family thing for them,” Weber said.

The group practices each Tuesday night at Grace Lutheran Church in Champaign.

The number of shows each year varies. The group performs at the Grandview Memorial Gardens every Memorial Day. Before COVID-19, it sang at Veterans Affairs Illiana Health Care System in Danville. There is a fall show and competitions in the spring.

Weber is a former teacher at St. Matthew Catholic School. She enjoyed the combination of working and singing.

“Sweet Adelines, especially if you had a stressful day, going and singing for a couple hours just rejuvenates you,” she said. “We have several members who feel that way.”

She recently lost her husband, Bob. Weber has four kids, including daughter Kate, who is a Sweet Adeline singer in Maryland.

“We would have people come and sit and watch us,” Weber said.