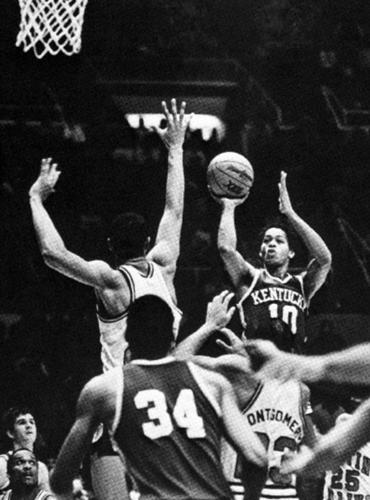 Kentucky’s James Blackmon (10) goes up for ashot against Illinois on Dec. 24, 1983. The Wildcats won the “blizzard game” on Blackmon’s shot at the buzzer. 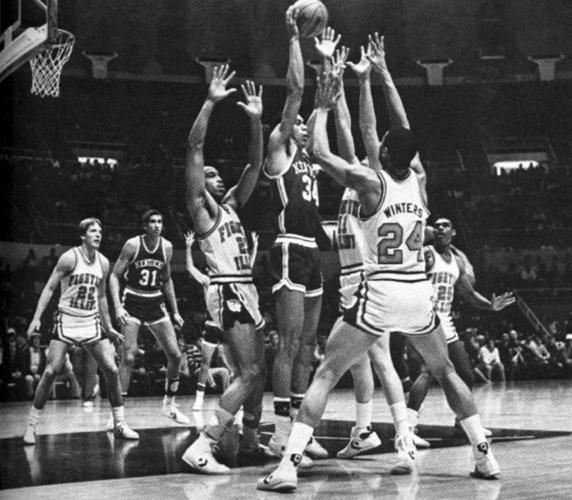 Kentucky’s Kenny Walker (34)reaches for the ball against Illinois’ Efrem Winters in a 1983 game at the Assembly Hall. Walker was one of three Wildcats to finish in double figures.

Kentucky’s James Blackmon (10) goes up for ashot against Illinois on Dec. 24, 1983. The Wildcats won the “blizzard game” on Blackmon’s shot at the buzzer.

Kentucky’s Kenny Walker (34)reaches for the ball against Illinois’ Efrem Winters in a 1983 game at the Assembly Hall. Walker was one of three Wildcats to finish in double figures.

As Snowmageddon ’22 bears down on C-U ahead of Wednesday’s Illinois-Wisconsin men’s basketball matchup, it brings back memories of blizzard-impacted games from the past.

None is as infamous as the Dec. 24, 1983, battle between Kentucky and Illinois, both unbeaten, at the Assembly Hall.

The 1 p.m. tipoff featured Joe B. Hall’s Wildcats, who eventually got to the Final Four. They were led by 7-foot-1 Sam Bowie and 6-11 Melvin Turpin.

A “helluva storm” kept the crowd way down, with listed attendance 10,732 and actual folks in the seats limited to 7,651. The roads were treacherous, and parking was problematic.

Suzanne Warner was one of the lucky ones in the crowd. Back in town to visit her family, she decided to go to the game.

“The weather was just horrible,” said Warner, a Champaign Central and University of Illinois graduate. “People had gone to a lot of work to get to the Assembly Hall.”

Warner was happy she went.

“We all had a ball,” Warner said. “It was a nice, fluid, fun game with a lighthearted atmosphere.”

“Three officials coming out with jeans on,” Pickering said.

The actual assigned referees couldn’t make it to the game because of the weather.

“Whoever was in charge just made a really fast, good pivot and said ‘OK, let’s not cancel the game. Let’s put a Plan B into place,’” Warner said. “The situation got fixed quickly.”

Illinois found three guys in the stands with officiating experience.

“Charlie Due was my high school gym teacher,” Warner said.

From all accounts, the substitute refs did themselves proud, drawing praise from the players and coaches.

“I thought the game was called very well,” said Pickering, who watched from B section. “They let them play.”

“The players were really respectful of the refs,” Warner said. “They honored that really well.”

There wasn’t any ref-baiting from the fans.

“They appreciated the situation,” Warner said. “Everybody cheered for the game. I just remember the atmosphere being really positive.

“It’s bad weather. It’s Christmas Eve and we still got to watch the game. It was a great opponent.”

The less-than-full house still made plenty of noise. Nothing fires up the crowd more than a highly ranked visitor.

“It was a fantastic game,” Pickering said. “Those who were there were loud.”

It turned into two-plus hours of holiday fun and a great way to forget about the weather troubles.

“We drove up from Paris,” Jeff Dayton wrote on Facebook. “Normal conditions, an hour drive, but because so many highways were shut down, it took considerably longer.

“Still missed the tip even with it delayed” by about 15 minutes.

With C-U and area roads blanketed by snow, getting there was the biggest trick.

“I remember walking to that game with my family,” Lisa Stewart wrote on Facebook. “Only about a mile and a half, but it was an adventure.”

Once inside, the snow was out of mind for the crowd.

“We were there and it was freaking awesome,” St. Joseph’s Greg Immke shared.

The officials weren’t the only ones who didn’t make it to the game.

Chris Antonsen tried in vain to reach the Assembly Hall.

“I was supposed to be there, but we got badly stuck in wild drifts just a half a block from home,” he posted on Instagram. “It was a great game, even on TV.”

Ed Bond was scheduled to work the broadcast for Bromar Sports.

Bond started out from his then-home in Northbrook and drove down I-57 toward Champaign.

His Chrysler LeBaron got stuck in the snow. The interstate was shut down in both directions.

Bond and others were sheltered in Ashkum, 60 miles from Champaign.

“This is pre-cellphone,” Bond said. “My equipment was already at the Assembly Hall. So, someone else set it up and got it on the air.”

On Christmas morning, I-57 was open going north, but not to the south. Bond and other Illini fans headed that day to O’Hare International Airport for a trip to the Rose Bowl.

The fans who made to the Assembly Hall saw a doozy.

Illinois stormed to a 33-26 halftime lead. But the Wildcats rallied, with reserve James Blackmon banking in the winner at the buzzer.

Blackmon took just three shots in the game, hitting them all.

In fact, Kentucky didn’t miss many. The Wildcats hit 63 percent of their shots from the field and were 6 of 7 at the free throw line.

Doug Altenberger scored 19 to lead Illinois and Efrem Winters had 15. They were the only two in double figures for the Illini, who hit 51 percent from the fied. Lou Henson’s team missed half of its eight free throws, which made a huge difference in a close game.

It wasn’t the only meeting between the teams that season. In March, Kentucky hosted the Illini in the NCAA regional with a trip to the semifinals on the line.

The Wildats won 54-51. The game forced a change in the NCAA tournament rules, with teams no longer able to play on their home court.