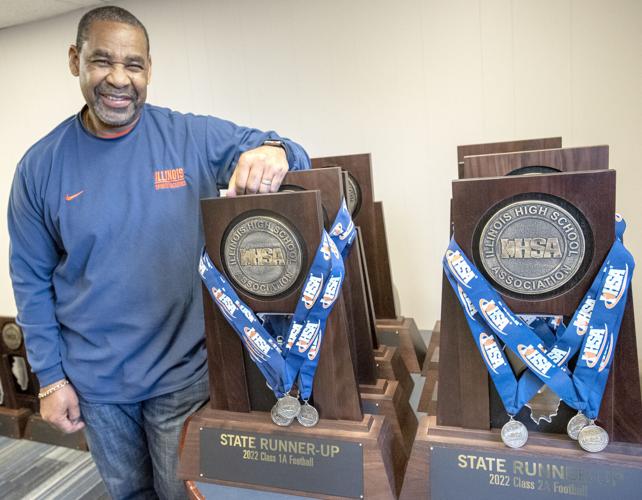 Lenny Willis, the University of Illinois’ longtime associate athletic director for sports facilities, shows the trophies for this year’s IHSA state football tournament Friday in his office at Memorial Stadium in Champaign.

Lenny Willis with the IHSA trophies for football in his office at Memorial Stadium at in Champaign on Friday, Nov. 18, 2022.

Lenny Willis, the University of Illinois’ longtime associate athletic director for sports facilities, shows the trophies for this year’s IHSA state football tournament Friday in his office at Memorial Stadium in Champaign.

Lenny Willis with the IHSA trophies for football in his office at Memorial Stadium at in Champaign on Friday, Nov. 18, 2022.

When the Illinois High School Association wisely decided to move the state championship football games to Memorial Stadium in 1999, Lenny Willis jumped in to help.

“It’s been a joy to see the kids and parents and everything down here,” Willis said. “It’s a lot of work, but it’s enjoyable.”

All these years later, the longtime University of Illinois associate athletic director for sports facilities will be in charge for the last time.

During more than two decades running the event, Willis has seen players who spent their college years at the UI. Others went on to fame at other schools. Some went to Ohio State, where Willis played in the 1970s.

Championship weekend starts Friday with four games in Class 1A, 2A, 3A and 4A. The larger schools compete Saturday.

“When they get down here, I make sure everything is set and ready for those guys to go,” Willis said.

It can be hectic. Eight teams each day move in and out of their locker rooms.

“We try to make them feel very comfortable,” Willis said.

Knock on wood, there have been no major snafus during the championships.

That looks like it will be the case again this year, with temperatures forecast in the 50s. There is a chance for rain both days.

“That’s the big thing,” Willis said. “Everything else is pretty mundane.”

Willis oversees game-day operations from a command post toward the top of Memorial Stadium.

One of his favorite duties is being the keeper of the trophies and player medals. Supplied by the IHSA, they arrived in his office last week, where they were safely stored.

“I get to bring the trophies down,” Willis said. “The kids are excited when they get their medals.”

This is not a one-person operation. Far from it.

Willis is quick to credit the many helpers in his office and beyond.

The main priority for Willis during the weekend is what happens inside the stadium. But the event spreads into the football parking lots, where fans tailgate.

Unfortunately, there is no guarantee the title games will be in C-U beyond this year. The IHSA will decide in December on the future host site.

“I think the kids look forward to playing at Memorial Stadium, the University of Illinois,” Willis said. “That’s a great treat.”

“You can’t beat that,” Willis said.

Willis, one of the friendliest folks you will ever meet at the UI, is retiring in the spring after starting at the school three-plus decades ago. His first position was as an assistant coach to Lou Tepper in the early 1990s.

“The staff makes this job very rewarding. I’ve got people who like working and going out of the way for the student-athletes here,” Willis said.

“That makes it easy to come to work,” he added. “I think I’ve had one sick day since I’ve been here. Coming here every day is like coming to meet the family.”

There is a succession plan after Willis retires. Jackie Szymoniak will take over at the stadium.

Willis, 68, and his wife of 48 years, Arlette, have three grown sons. Lenny Jr., Justin and Jacob live in the Tampa, Fla., area.

Jacob scored a touchdown to help Illinois beat No. 1 Ohio State in 2007.

“I told a crowd of Illini boosters and Ohio State boosters, there’s only one time I pull against Ohio State, and that’s when they play Illinois, because Illinois writes my check,” Willis said.