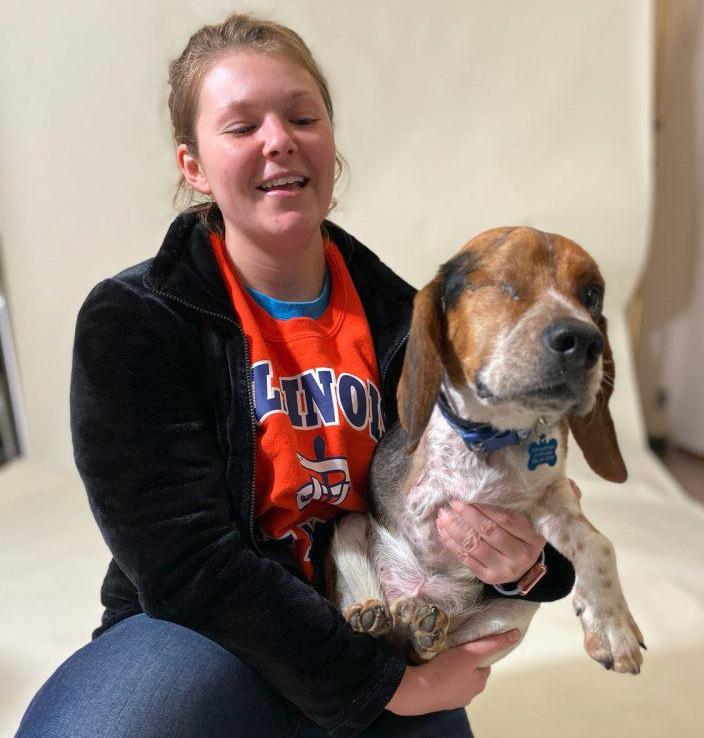 University of Illinois veterinary medicine student Tori Worthen holds Norman the beagle, whom she adopted on New Year's Eve after helping to treat him earlier in December, on Thursday, Jan. 9, 2020, at The News-Gazette's offices in downtown Champaign. 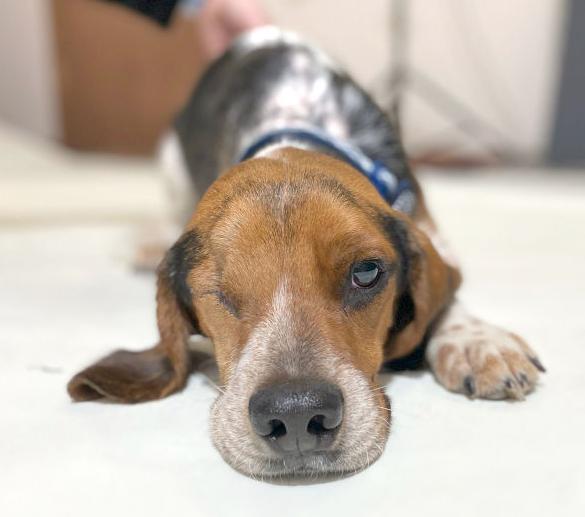 Norman the beagle takes a rest while visiting The News-Gazette's offices Thursday, Jan. 9, 2020, in downtown Champaign.

University of Illinois veterinary medicine student Tori Worthen holds Norman the beagle, whom she adopted on New Year's Eve after helping to treat him earlier in December, on Thursday, Jan. 9, 2020, at The News-Gazette's offices in downtown Champaign.

Norman the beagle takes a rest while visiting The News-Gazette's offices Thursday, Jan. 9, 2020, in downtown Champaign.

Medical professionals are supposed to keep an emotional distance from their patients.

But Tori Worthen’s heart melted when one of them put his head — wet nose included — into her hand.

“I knew from the beginning that I wanted to take him home,” said the fourth-year University of Illinois veterinary medical student. “I felt like we had bonded.”

So that was that — the unnamed beagle’s story would have a happy ending. Once an injured stray, he’s moved up to secure surroundings in a loving home with two genial cats for company and, in the future, two dog buddies for running mates.

Life is good, but it wasn’t always.

Norman — he started out unnamed, then was given the monicker of Jack and finally, his current title by Worthen — had a rough start in life.

But his is more than a story about an upwardly mobile pooch.

There’s an unidentified Good Samaritan, a charity fund at the UI College of Veterinary Medicine for treating homeless, injured animals and skilled veterinarians who work there.

They all played important roles because Norman was in a world of hurt on Dec. 3, suffering from serious injuries of undetermined but suspicious origins.

That’s when the Good Samaritan brought him to the UI’s Small Animal Clinic, where Norman was diagnosed with a ruptured eye and an injured right front leg, where three toes had been “traumatically amputated.”

The eye injury was caused by “high impact” trauma. There was speculation that he had been struck by a car, but Worthen said “I’ve never seen a dog get hit by a car and lose three toes.”

In addition, the 18-month-old beagle (the age is an estimate) was severely undernourished, weighing just 15 pounds.

Worthen said she was among the vet med students who treated Norman, and he was initially depressed by his condition — lethargic, not feeling well and sleeping constantly as his body fought off an infection and his injured leg was dying.

On Dec. 12, Norman was transferred to the Champaign County Humane Society to continue his recovery.

On Dec. 31, Norman got a early start on the new year by getting a new life. That’s when Worthen adopted him.

“He ran up to me,” she said. “He seemed happy. He was at my feet and whined a happy whine.”

Now, except for a slight problem with Norman’s separation anxiety, all is going well. Norman has put on weight — he’s up to 25 pounds — and he has no time for self-pity.

“He walks up and down the stairs. He jumps on the couch just fine,” Worthen said. “He has seen two rabbits, and he really turned on the speed. You wouldn’t think that a three-legged dog could run that fast, but he surprised me.”

It’s been a whirlwind for Norman, and there are more changes on the way.

After the 25-year-old Worthen graduates in May, she’ll take a job as a veterinarian at a clinic in Litchfield — located between St. Louis and Springfield in Montgomery County — and move back to her family’s home in Virden.

Worthen attributed her future living arrangements to the need to save money to pay off education loans.

But she predicted that Norman will enjoy a rural life that will offer plenty of room to roam. She’s already introduced him to the family’s two dogs, and she said they appeared to hit it off.

Most of all, Worthen said, she’s looking forward to watching Norman continue his recovery and thrive.

“I felt very attached to him very quickly,” she said. “I just wanted to see him have a great life.”