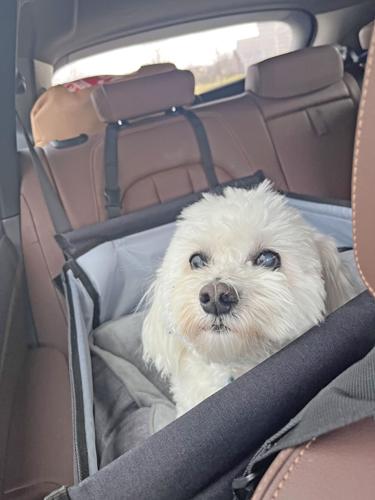 After a mild sedative, Dash Prichard — who tends to hyperventilate when just looking at a car — zonked out for much of the journey from Champaign to Scottsdale, Ariz. 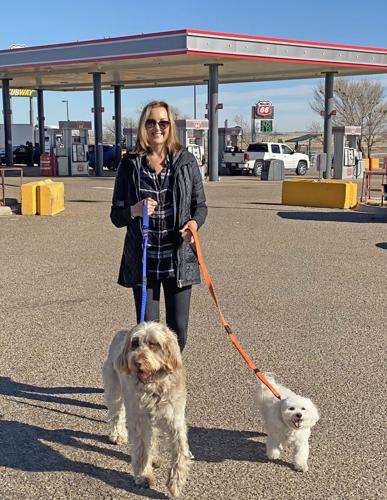 Mom takes Louie, left, and Dash for a walk during the long haul from Champaign to Scottsdale, Ariz.

Anyone who’s gone on a family road trip, whether with kids, pets or a mix of both, knows that they require a fair amount of planning, patience, multiple bathroom stops and a sense of humor.

I learned this years ago as a kid in a very large family. We were used to long drives packed into a retro-fitted “maxi-van,” complete with a large cooler wedged between the front and back rows (we didn’t do fast food in those days). The scent of a thermos full of strong coffee wafted through the van as our dad powered straight through from our home in Champaign to our cabin in Door County, Wis.

It was the ‘70s, and there were no iPads, phones or even the now-seemingly-retro built-in video screens. In those days, we played car games or read or just watched the farms go by and listened to Dad imitate cow noises as the countryside rolled on by.

Fast forward several decades, and those trips are a distant yet somehow fond memory. The years of road trips when my own kids were little are also well in the past — and so it was just me, my husband and our two dogs, Dash and Louie, on our recent road trip from Champaign to Scottsdale, Ariz.

Yes, it’s another dog column. So stay tuned (or tune out) with the caveat that, yes, it will be mostly about dogs, and no, they probably had no clue what was happening for the three days we packed them up along with our luggage and endless dog supplies and drove west (much of it parallel to Route 66 and all those kicks).

Like many pet owners, I tirelessly anthropomorphize my dogs, and this trip was no exception.

There is a fair amount of pre-planning when traveling with dogs. First, dog-friendly hotels need to be secured. Second, the car has to be outfitted for maximum comfort and stability for said dogs. In our case, my very resourceful husband scoured Amazon and found a platform that turns the back seat into a large, dog-friendly surface — one where paws would not get stuck in the space between the seats. Adding a couple of cushy blankets, dog toys and a small dog bed made it the ultimate in canine napping luxury.

And so the trip began. After three thorough house checks, we went over a final verbal checklist: phone, charger, wallet, readers, dog food, leashes, more dog stuff. Once we were satisfied that we had enough to open a small pet store, we were off on the first leg of the trip.

Lest I forgot to mention, there was a very key component to the travel plan — the doggie sedatives. I’d like to offer a quick thank you to Animal Hospital at the Crossing for making this trip possible. A small dose took the edge off for Dash, who tends to hyperventilate when just looking at the car. Just to be on the safe side, Big Louie got a dose, too.

We stopped several times along the way, attempting to get the pups to drink some water, do their business and get back into the car. The first day, they were wary every time one of us went inside a convenience store or rest stop, worried that we’d never come back.

When we checked into our hotel, relieved to have a room on the first floor and conveniently near the exit, both dogs were exhausted from a long day of napping in the car. Always early risers, they didn’t stray from their schedule and were up at 5 a.m. the next day. After a quick breakfast in the room — kibble for them, Belvita and coffee for us — we were off.

After nine-and-a-half hours, we arrived in Albuquerque, N.M., and decided to take ourselves and the “boys” on a walk through an outdoor shopping center for much-needed exercise. It was freezing cold, and Louie was too wound up to “go,” while Dash was somehow able to summon up enough pee to mark every other bush we passed.

This time, we weren’t as lucky with room placement and ended up on a second floor, far from the stairs. My (wonderful) husband ended up taking the dogs down the stairs and out in the cold to do their business that evening, and again when they woke around 4 a.m. (time change, but being dogs, what’s a time change anyway?). Just asking — is it possible to train a dog to use the toilet?

On Day 3, we drove from Albuquerque to Scottsdale. This was the shortest leg of the trip, and after two days, the dogs had it down pat. They’d accepted that their lives now consisted of sleeping off and on while the humans drove mindlessly, stopping for mini-walks, water and dog treats before being hoisted back into the dog row.

Important note: A 20-pound dog is much easier to get into the car than a 90-pounder who has a 6-inch vertical except when being coaxed into a car. Pro tip: Lift with your knees. They seemed resigned that their big, grassy backyard they used to run (and poop) in no longer existed. No more lounging around on the furniture while the humans took care of their every need. No, this was a new vagabond life for them.

As an aside: During this trip, we humans were entertained while listening to the Illinois-Wisconsin basketball game (go Illini!), at least three votes for the speaker of the House (before we couldn’t take anymore and changed to the easy-listening station “the Blend”) and a podcast about gut microbiomes — which I found fascinating. So there was that.

And then, after what seemed like an endless sojourn through five states, we finally arrived at our destination. As we opened the car door, removed the leashes and let them explore their dwelling, the pups seemed to intuit that this was their home away from home — at least for a while. They quickly adapted to peeing on desert plants and have learned not to sniff a spiky cactus too closely.

They’ve made themselves at home, lounging on the furniture, barking at the desert wildlife and meeting new canine friends on their walks. Little do they know that a return car trip is scheduled for the spring. (Shhh).

Until then, I’ll be writing this column — with two furry sidekicks for inspiration — from sunny Arizona.

Peggy Prichard is a Champaign native and 1981 Central High grad. Married to Joel Prichard since 1990, the mother of two retired in June and now works part-time as a marketing consultant and freelance writer. To contact her, email pegaprichard@gmail.com.

My Turn | The life of a coach's wife

As a coach’s daughter, I had an idea of what I was in for, but it still doesn’t fully prepare you for your life as “coach’s wife," Ashley Hipsher writes. Many missed dinners. Restless nights. Distracted conversations. Pieces of paper with plays left in every room of the house.

Whether it takes a resolution, an affirmation, a wish or a prayer, here’s to living your best life in 2023.