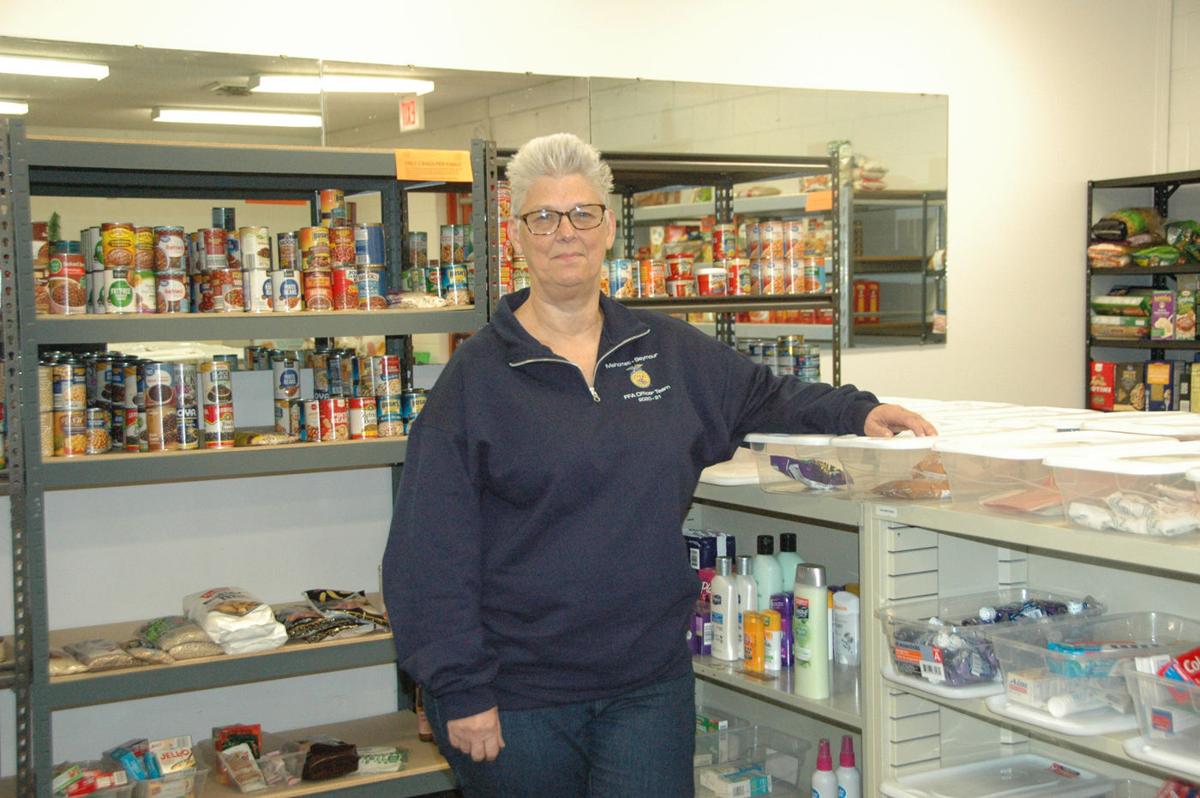 Cindy Brumfield is shown in Mom’s Pantry — a food pantry she set up at Mahomet-Seymour High School, where she is a paraprofessional. What started as Brumfield bringing granola bars to put in her desk for students who were hungry has turned into a much larger endeavor. 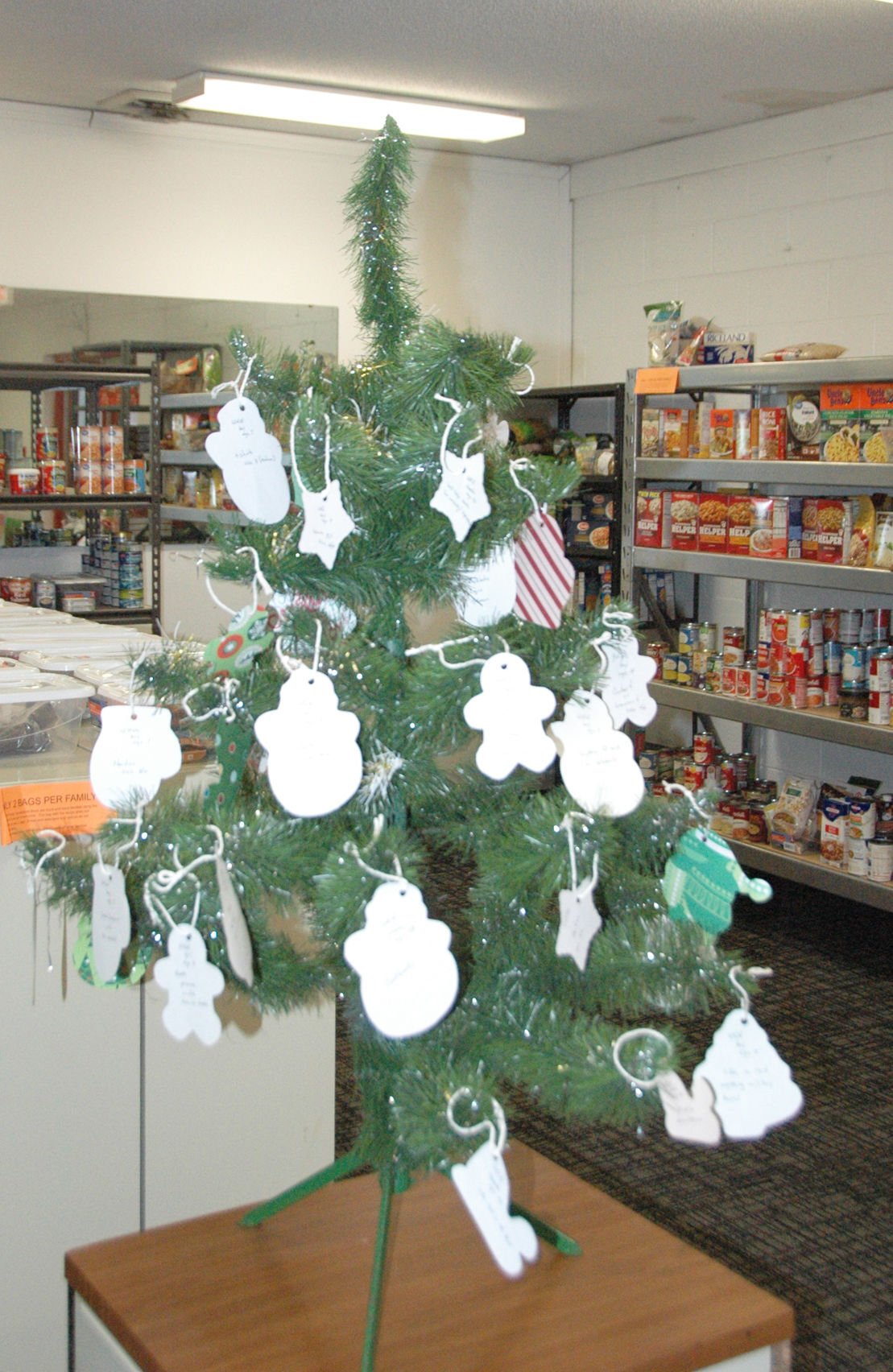 A giving tree is set up at Mom’s Pantry at Mahomet-Seymour High School. People are able to take a tag from the tree and buy for those who are less fortunate. (Dave Hinton/The News-Gazette) 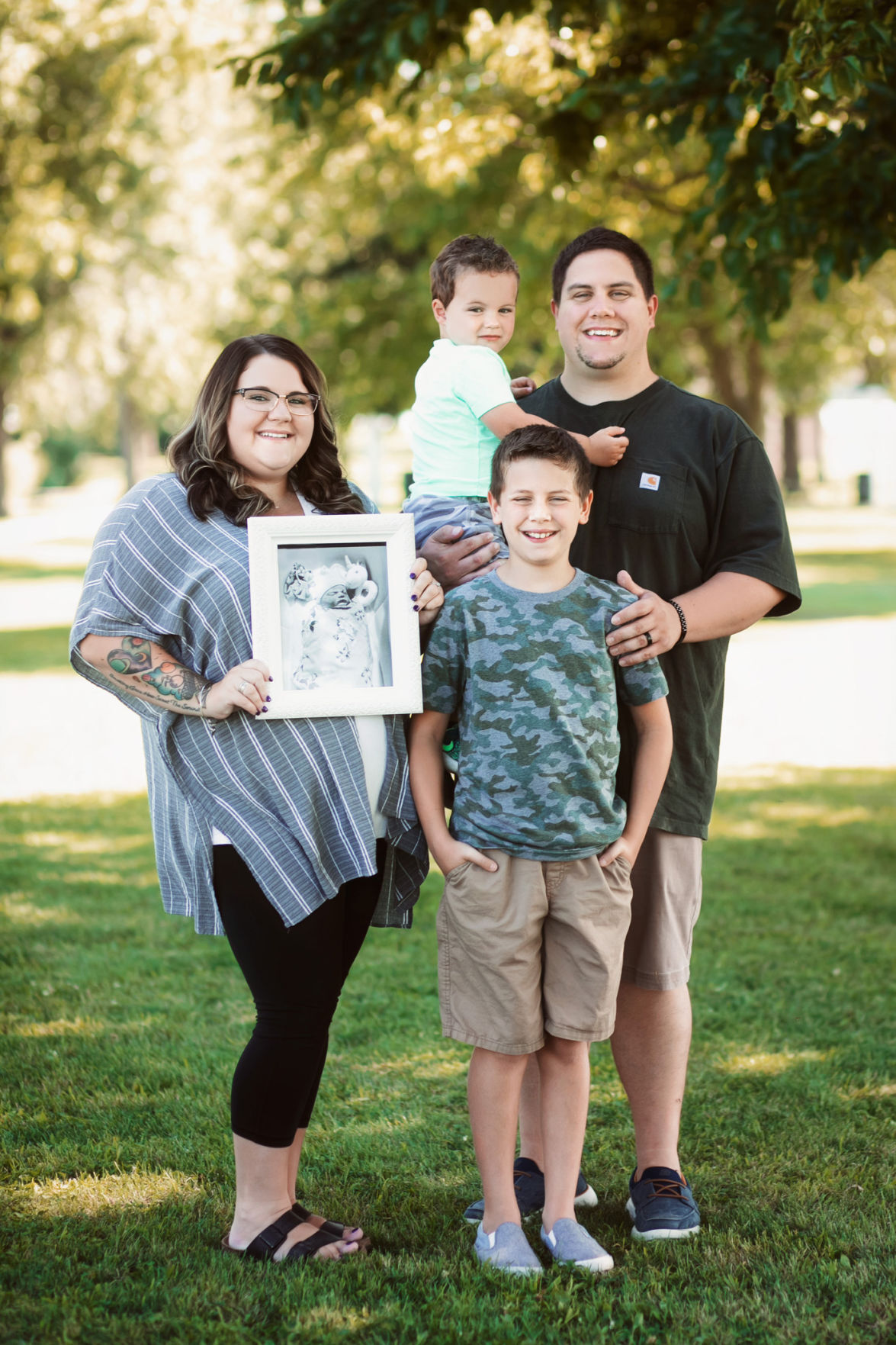 Bryanna and Austin Dobbs with their two sons, Trevor, 11, and Quinton, 3, and a photo of their daughter, Ivy, who was stillborn in May. 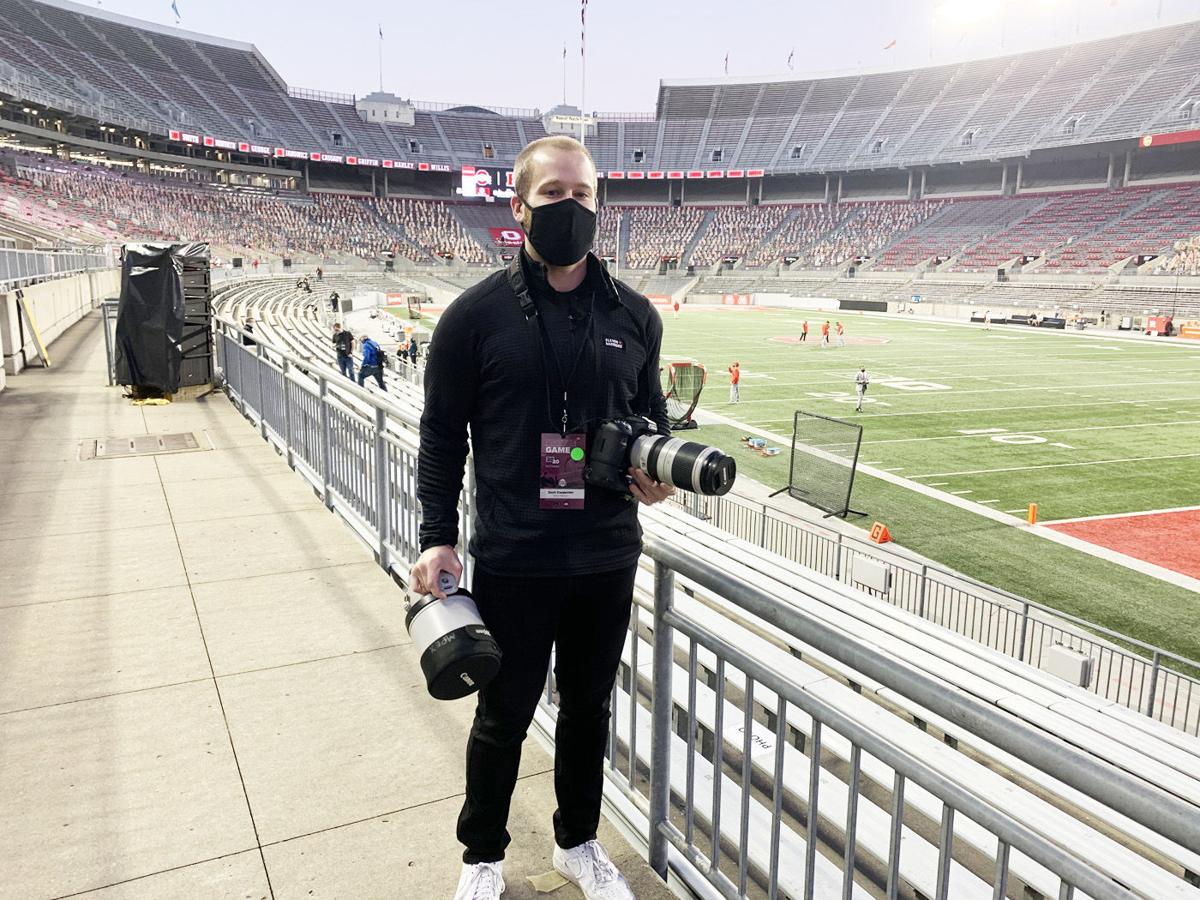 Cindy Brumfield is shown in Mom’s Pantry — a food pantry she set up at Mahomet-Seymour High School, where she is a paraprofessional. What started as Brumfield bringing granola bars to put in her desk for students who were hungry has turned into a much larger endeavor.

A giving tree is set up at Mom’s Pantry at Mahomet-Seymour High School. People are able to take a tag from the tree and buy for those who are less fortunate. (Dave Hinton/The News-Gazette)

Bryanna and Austin Dobbs with their two sons, Trevor, 11, and Quinton, 3, and a photo of their daughter, Ivy, who was stillborn in May.

MAHOMET — When Cindy Brumfield, a paraprofessional at Mahomet-Seymour High School’s alternative school, had students coming to school in the morning hungry, she decided to do something about it.

It started small. She would put granola bars and other items in her desk to give to the students.

“Then it kind of snowballed,” she said. “I had no idea it would be as big as it is.”

Now she oversees a full food pantry called Mom’s Pantry in what is the former weight room at M-S. Nonperishable foods, bread and other bakery items, personal-hygiene products, and even clothing are available.

Anyone with a child in the M-S school district is eligible to get items.

Many students take a bag or two of items home with them from school.

Brumfield also gives up part of her Sunday evenings to open the pantry from 5:30 to 7 p.m.

“There’s a definite need. I don’t mind at all,” she said, adding that the image of Mahomet being strictly an affluent community is a misconception. “There’s a lot of need in Mahomet.”

About 20 families come to the pantry regularly on Sunday evenings.

When Brumfield started the pantry about 18 months ago, she had no idea a pandemic would be on the calendar.

“Food right now actually is an issue for a lot of families,” she said.

Pantry items come via donations of food/products or money.

Officers of the M-S chapter of FFA recently held a drive-thru food drive. One of the soccer teams made a donation.

Brumfield also gave out items needed for a Thanksgiving dinner to about 20 families — about double the amount of last year.

She has set up a giving tree (above) and asks families to answer four questions: What do you need? What do you want? What do you like to wear? What/who is your favorite book/author?

Tags are placed on the tree (below) for community members to take and buy a gift to help make someone’s holiday a little brighter.

Brumfield said she believes in giving back.

“Volunteering is kind of my thing,” she said. “I think everyone should be involved. I think volunteering should be a graduation requirement for the kids.”

Death of child prompts couple to help othersA Villa Grove couple has turned a time of tragedy into a means to give to others.

Bryanna and Austin Dobbs’ daughter, Ivy Faye, was stillborn in May. Out of that heartache, they decided to create Ivy’s Acts of Love, in which they do random acts of kindness.

“When I was in the hospital with her, I met another” mom who had a stillborn child, Bryanna Dobbs said. “She knew my mom, and they did birthday bags in honor of their daughter, Ainsley, every year. I felt like I wanted to do something in Ivy’s name.”

One of Bryanna’s friends created a card with Ivy’s photo on it and labeled it “Ivy’s Acts of Love.” It contains an address for a Facebook page.

“I’ve had tons of people in the community ask for the cards,” she said. “We send cards in the mail to people. They do random acts of love for Ivy,” whether it’s buying coffee for the next person in line at Starbucks or buying someone’s meal at McDonald’s.

During the summer, Bryanna and her two sons, ages 11 and 3, went to local parks and passed out Gatorade to children who were playing.

She said the acts of kindness have helped her to begin to heal from the hurt of losing her baby.

“It’s taught my kids a lot about giving to others, and it’s opened others’ eyes,” she said. “I feel like people are scared to talk about people’s babies who have passed when all loss moms want is to hear their baby’s name.”

She has established a Facebook page, “Forever with Us, Ivy Faye Dobbs.”

For Christmas this year, the Dobbses will sponsor a young girl from Champaign who is waiting for heart surgery in St. Louis.

“We wanted to buy Christmas for the baby,” Bryanna said. “Our community, tons of people have given gift cards and sent money for us to give to this family.”

Santa’s elves are in need of the community’s help to donate toys.

The collection barrels have been placed at Robinson Chiropractic, Dollar General, Casey’s, Subway, CVS and MS Salon (for caps, scarves, gloves and mittens).

From covering Eagles to snapping BuckeyesAn area native who used to cover high school football in central Illinois is now covering recruiting for one of the top programs in college football.

Zack Carpenter, a Gibson City native and former sports editor of the Rantoul Press, covers the Ohio State Buckeyes for an online publication. He’ll be covering today’s game against Illinois.

“I’ve come a long way (geographically, at least) since my time at The Rantoul Press,” Carpenter said.

After serving as sports editor for the paper from August 2016 to February 2018, he moved to Connecticut, where he lived in Hartford and worked as a sports reporter at a daily paper in Bristol.

Following seven months of East Coast living, the road brought Carpenter back to the Midwest and Big Ten country, where he has been covering the Ohio State football team and a bit of the men’s basketball team since September 2019.

He is the football recruiting beat writer and the photographer for a website called Eleven Warriors, an online publication that began as a small blog in 2006 and has grown into one of the largest independent sports sites in the country.

“Essentially, I’m working two jobs in one, and in that sense, it’s similar to my time in Rantoul, where I was a one-man band,” he said. “It’s on a much larger scale now, but the fundamentals stay the same.”

He is in charge of speaking with the high school football players the Buckeyes are recruiting, their parents, coaches and other sources on a daily basis to give fans the latest on who the team is looking to bring in to be the future of the program.

“As Brad Pitt once said, ‘Cousin, business is a-boomin,’” Carpenter said, referencing Pitt’s character, 1st Lt. Aldo Raine, in 2009’s “Inglourious Basterds.” “At least it has been for the Buckeyes lately.”

When he started in the position last fall, Ryan Day was taking over for Urban Meyer, whom Carpenter called “one of the best recruiters in college football history.”

“Maybe the biggest question mark was how Day would perform as a recruiter as the Buckeyes’ new head coach. Mystery solved,” he said.

Ohio State currently has the No. 2-ranked recruiting class in 2021 behind a host of five-star prospects, and it has a chance to go down as the best recruiting class in the history of the program. And it’s probably going to get passed up by the Buckeyes’ 2022 class, Carpenter said.

Maybe Carpenter is a good-luck charm. He’s also an avid fan of the Kansas City Chiefs.

While the majority of his focus is on future Buckeyes, he also does some coverage of the current team.

“That includes analysis and some stories here and there, plus press conference coverage. My favorite part of the job is being a photographer,” Carpenter said. “It’s obviously much different this season with no fans in the stands. But during the 2019 season, the energy and atmosphere of being on the field at The Shoe, The Big House or the College Football Playoff in Phoenix was unmatched. Those were some of the best times I’ve had over the past couple of years, and I’m eternally grateful for the opportunities I’ve been given.”

You can check out some of Carpenter’s work on Twitter (@Zack_Carp) and at elevenwarriors.com, and keep an eye out for him roaming the stands while he’s shooting Saturday’s game against Illinois.

A little confidence can go a long wayDr. Gerald Cockrell of Terre Haute, Ind., has been named a co-recipient of the Illinois Community College Trustees Association’s 2020 Distinguished Alumnus Award.

Cockrell, a 1973 graduate of what was then known as Danville Junior College, serves as president of the Danville Area Community College Alumni Association and is an example of the greater impact community colleges have on the communities they serve.

Having tried college once, and with four years of military service during the Vietnam War under his belt, Cockrell returned home determined to get some sort of college degree.

He said the junior college that became DACC significantly impacted his future when he enrolled in the electronics program and found his life’s niche.

“That two-year experience provided me the confidence to do almost anything,” he said. “With only one week to go before graduation, and with no clue as to what would come next, Professor Marion Blackburn asked me what I would do after graduation. When I responded that I didn’t have a clue, he mentioned the electronics program at Indiana State University.”

After a visit to campus, he and two of his classmates enrolled at Indiana State, becoming the first of many who transferred from what was previously considered a terminal-degree vocational program and laying the foundation for one of the first “2 + 2” partnerships for career programs between DACC and area universities.

After several years in the industry and a return to education, Cockrell retired from Indiana State in 2012 as a professor of electronics and computer-engineering technology.

Since retiring, he has continued to teach in the Ivy Tech Community College system.

Cockrell is a recognized international leader in the development and delivery of internet-based process control and automation programs and courses. He is a pioneer in the design and development of distance delivery of real-time laboratory experience.

In 2017, Cockrell helped to establish DACC’s Alumni Association and volunteered to serve as its president.

He and his wife, Jan, established the Dr. Gerald W. Cockrell scholarship fund with an endowment to the DACC Foundation.

The fund awards an annual scholarship of $500 to a student who has overcome life obstacles and is looking to make a difference in their life and community.

Campion is pursuing a bachelor’s degree in biological science within the College of Liberal Arts.

Krumwiede is pursuing a bachelor’s degree in accountancy within the Patterson School of Accountancy.

They were among 350 inductees.

Phi Kappa Phi is the nation’s oldest, largest and most selective honor society for all academic disciplines in its mission “to recognize and promote academic excellence in all fields of higher education and to engage the community of scholars in service to others.”