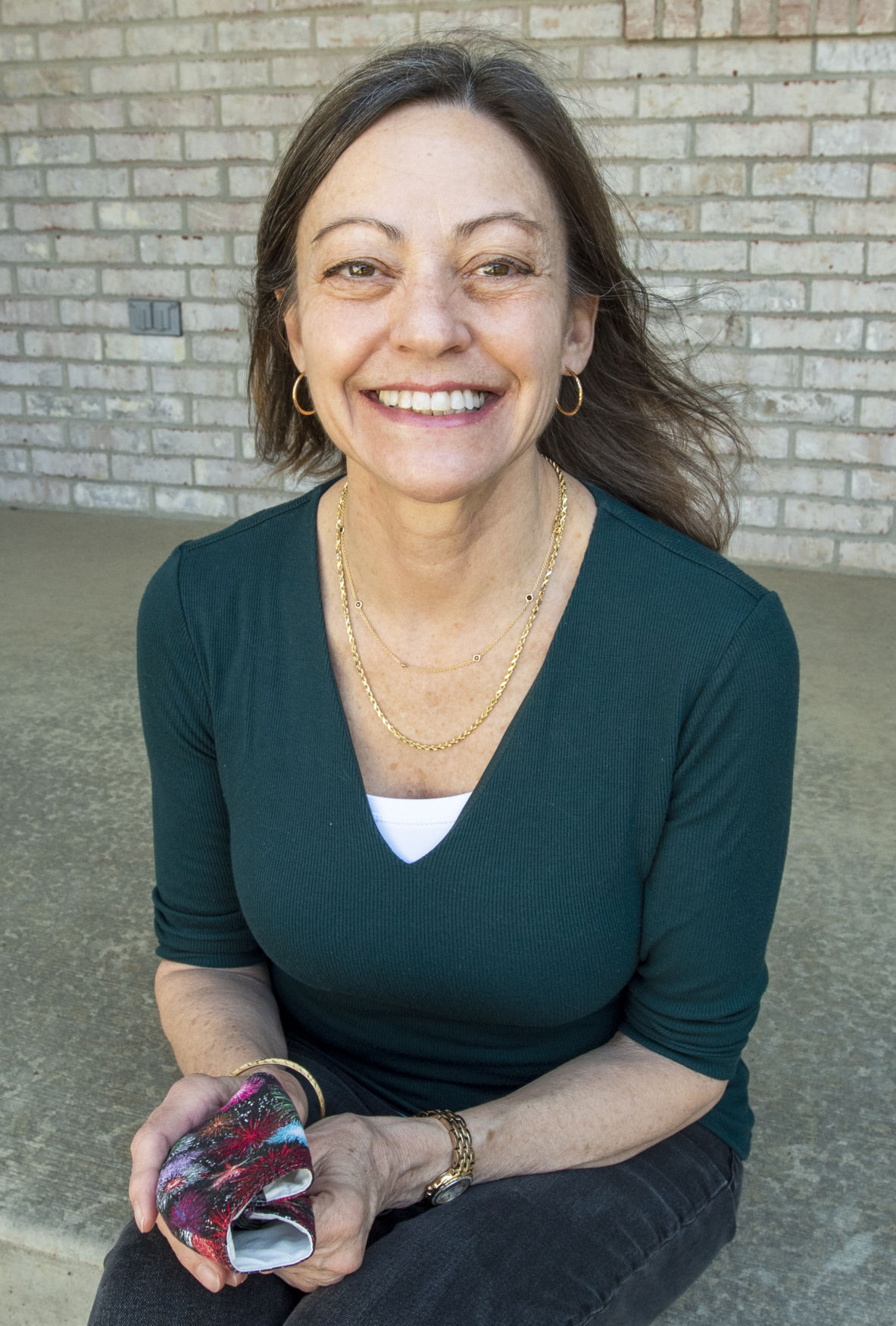 Sally McConkey, who is retiring from the Illinois State Water Survey after almost 37 years, is shown at her home in Champaign. 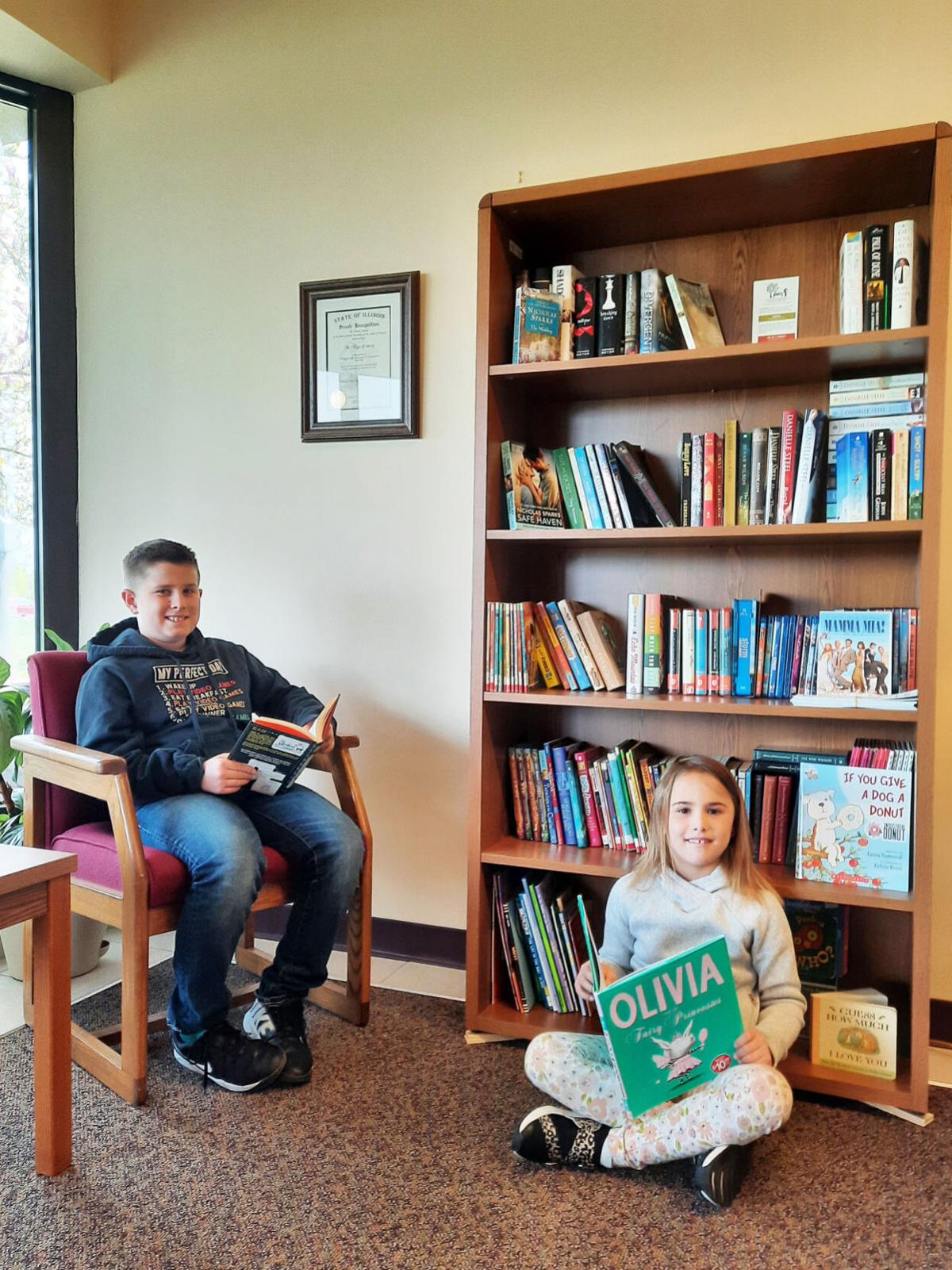 Alex and Sophie Dykstra, grandchildren of Savoy Village President Joan Dykstra, are shown at the Little Free Library at the Savoy Municipal Center. 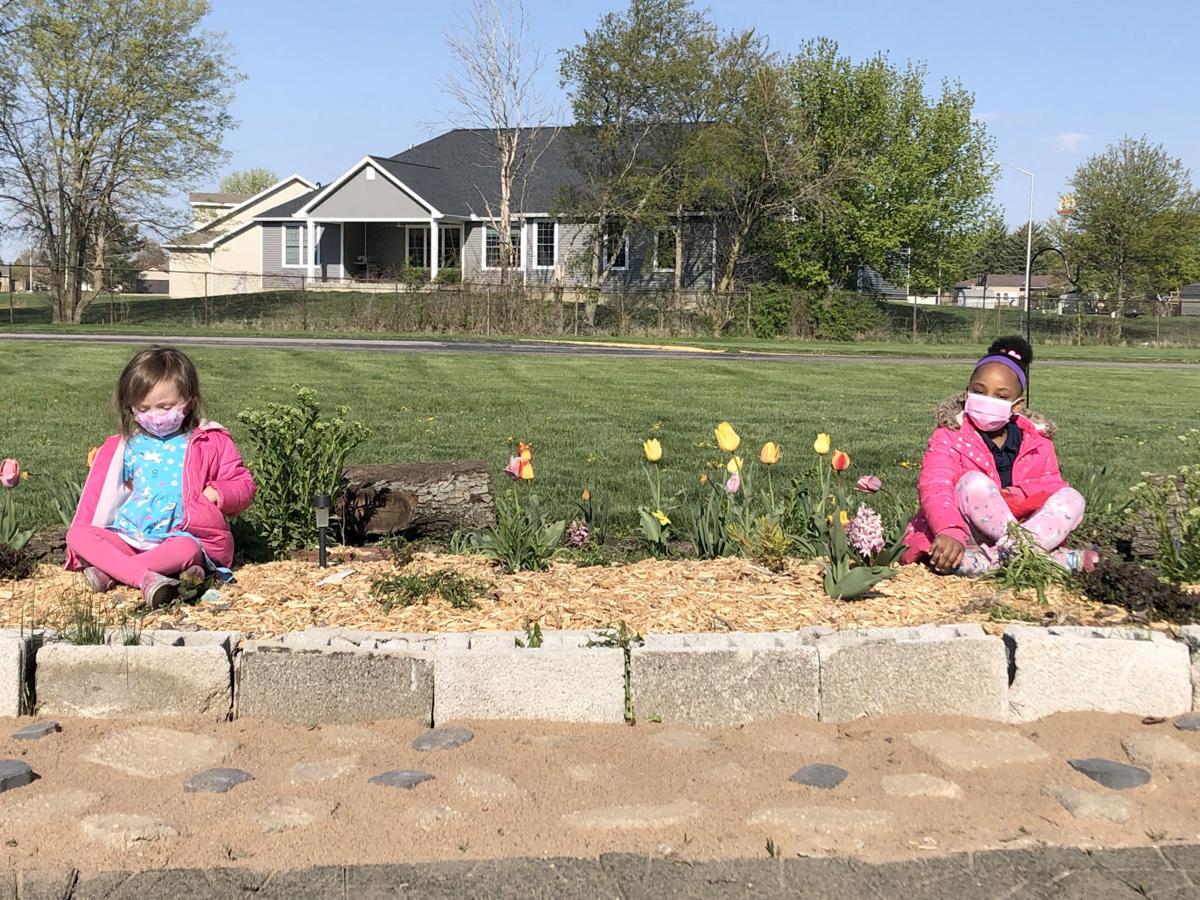 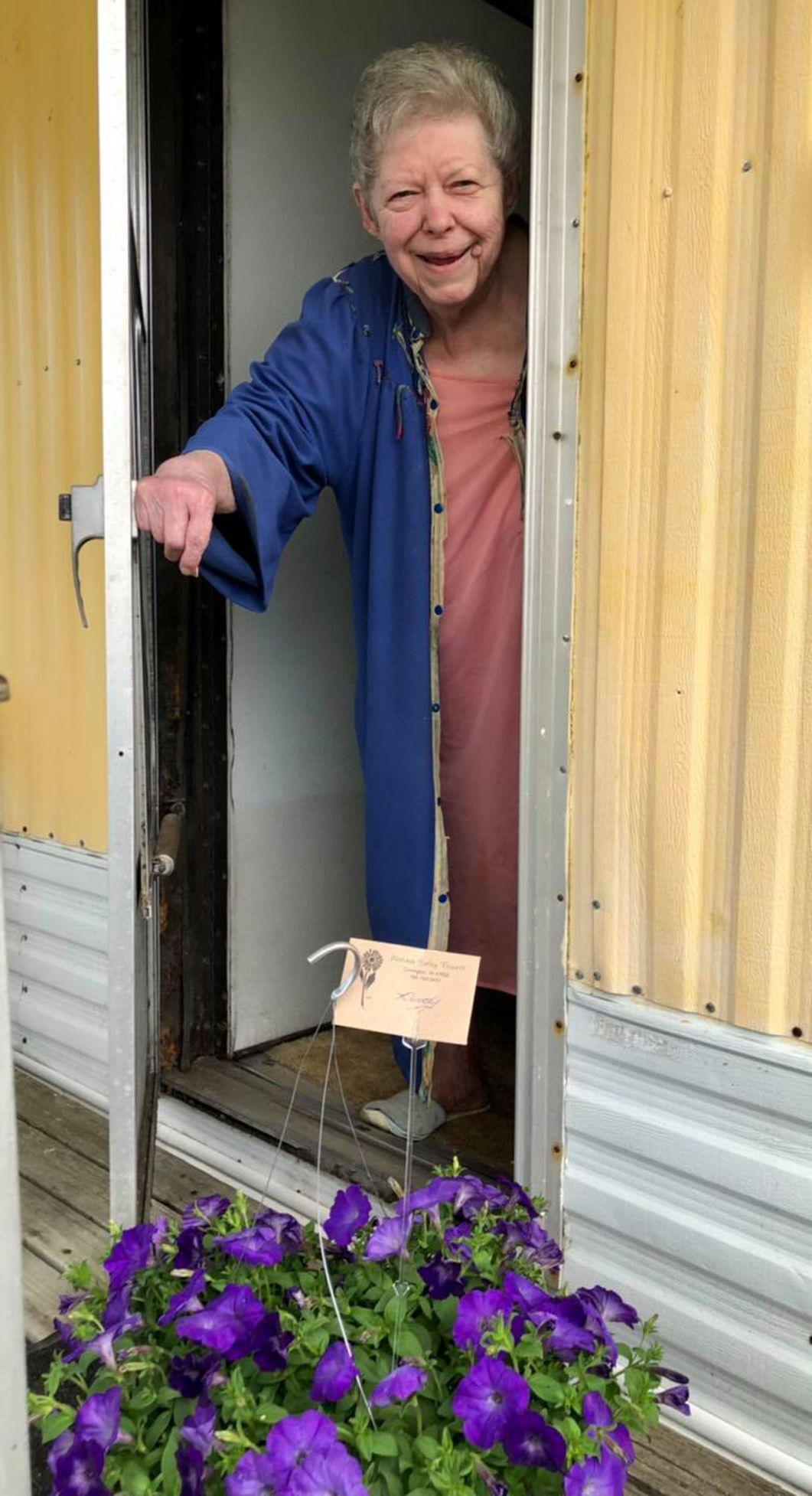 Dorothy Grubbs peeks out her front door as a floral arrangement sits on her front porch given to her by staffers at Danville’s Liberty Village, who also cleaned her yard. 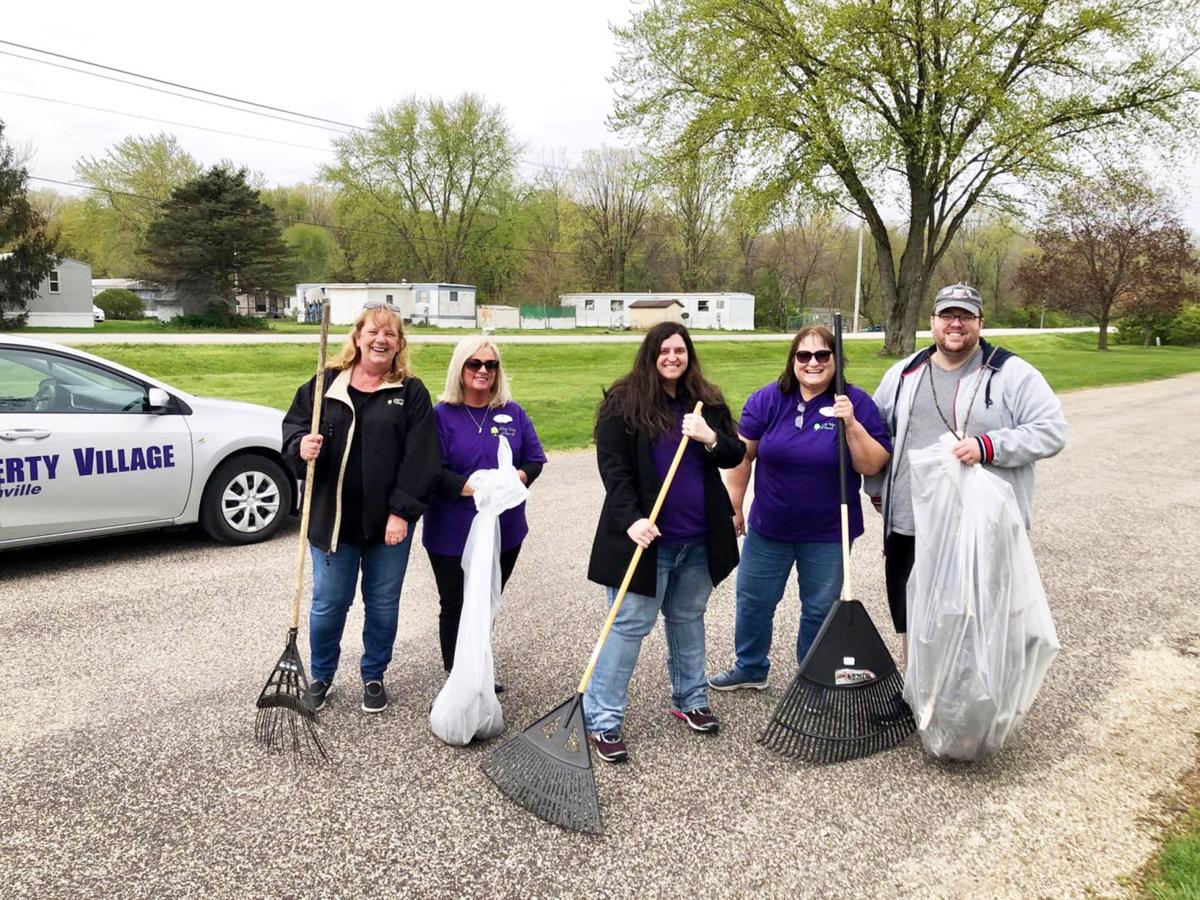 Liberty Village workers, Danville, with rakes at the ready after cleaning the yard of Dorothy Grubbs during National Volunteer Week. 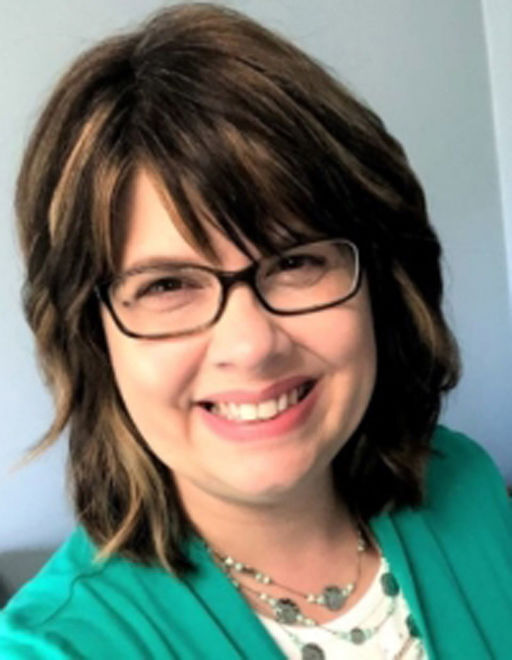 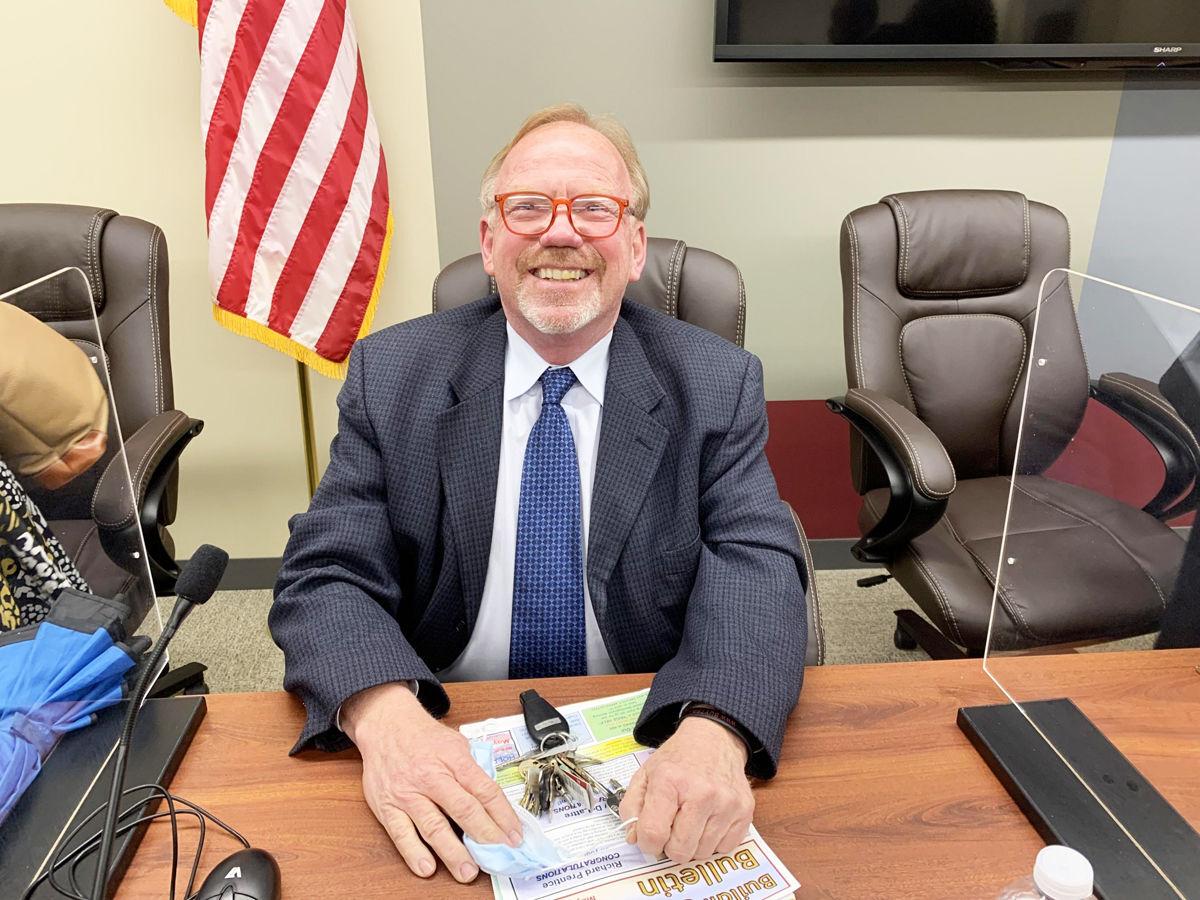 Sally McConkey was in her Illinois State Water Survey Office this week for just the third time in the last 13 months. Blame the pandemic for the infrequent office visits.

McConkey was there to start cleaning out her work space — retiring after almost 37 years. She leaves as section head of the Coordinated Hazard Assessments and Mapping Program (CHAMP). The 66-year-old said it’s time to move on to the next phase of her life.

The East St. Louis native now living in Champaign started “lowest on the totem pole” (assistant scientist) with the Water Survey after earning bachelor’s and masters degrees in engineering from the University of Illinois.

“I had fallen in love with the U of I when my older sister attended,” McConkey said. “There was no question I was going to the U of I after high school.”

McConkey was one of about 100 females out of 3,000 students in the engineering program at the university.

Working at the Water Survey (“I was impressed by the researchers and the work they did”) was a goal of hers — one she achieved after jobs with Illinois Bell and Goodell Engineering.

“We also work hard to communicate flood risks and interact with communities to communicate the information ... on how they can reduce their risk,” McConkey said.

She has also testified on floodplain management issues before the U.S. Senate and House of Representatives.

The amount of heavy rains (in excess of 2 inches) is a concern, having dramatically increased across the state.

“Some of our climate models are showing a 20 percent increase in overall rainfall” in the next century, she said.

One problem is that most communities’ storm sewer systems aren’t equipped to handle the higher amounts.

“Probably the biggest flooding problem that Illinois is going to have to deal with is in our communities,” McConkey said. “That has to do with stormwater infrastructure is undersized. The storm sewers were built in the ‘50s. They weren’t designed for today.”

McConkey has been working from home since the pandemic hit.

“I like it, but I would prefer a mix,” she said. “I miss interacting with people face to face, especially the people I work with. The people in the CHAMP section are just a real pleasure.”

McConkey won’t spend much time sitting around in retirement. She plans to continue her research with the aim to complete her PhD as well as to spend a great deal of time with family, including children Michael Broeren, Allyson Sehy and Gregory Broeren, and other family, particularly her grandchildren. She will also devote more time to her hobby of riding horses. McConkey has been taking riding lessons at Meg’s Riding Academy, rural Tolono.

Savoy residents now have another source for reading material.

A Little Free Library has been placed in the foyer of the Savoy Municipal Center, 611 Dunlap Ave.

“Having a central location for LFL librarians and the public to drop off and exchange books is important to the vitality of the program,” Dykstra said.

A section is also available for all types of movies.

Dykstra said donations of quality reads, both for children and adults, are welcome.

“If you enjoyed the book, share it with others,” she said.

The LFL is based on the honor system.

Students at Rantoul’s Broadmeadow Elementary now have an interactive space to learn.

An interactive garden is a place where the youngsters can learn and tend the flora.

“They can explore and be gardeners,” Principal Amy Blomberg said. “It’s pretty cool.”

The garden has flowers, plants, bird feeders and learning stations.

It’s a first for the school.

“The kids are excited about it,” Blomberg said, noting it “kind of forced us in the beginning to reconnect with nature.”

“That’s the bright side of things. It’s gotten kids back to the basics and be able to connect with the outdoors and be more creative in their thinking.”

Staff members from Liberty Village of Danville reached out to clean up the yard of a former resident of LV’s Hawthorne Inn during National Volunteer Week.

Grubbs was selected for the help because “she said she is on her own and ... her yard was such a mess,” Thompson said. “We thought she was the perfect candidate.”

For about two hours, Thompson, along with Debra Dubois, Keisha Alton, Linda Huston and Jon Andrews, cleaned up the yard.

“It needed a lot of TLC,” Thompson said, noting they hauled away a large quantity of leaves, branches and garbage. They also took her a basket of flowers.

Grubbs was more than pleased.

“They did a very good job,” she said. “They didn’t charge anything and wouldn’t take a donation. I can’t do (the yard work) anymore. I’m 81 years old. You don’t get much work for free these days.”

Grubbs recently fell, which has limited her mobility. She had been at Hawhorne Inn for physical therapy for 11 days.

“The rehab helped me a lot,” she said.

Thomasboro woman honored for her creativity

Thomasboro resident Penny Nigh was recently honored by the Library Advisory Board of Booth Library at Eastern Illinois University as a winner of the 2021 Award for Excellence in Student Research and Creativity.

Nigh won second place for Cultivating a Cohesive Workplace by Integrating Soft Skills Training in Professional Development Programs and Resources.

Nigh and her husband, William Nigh, have three children and one granddaughter. Her parents are Ralph Lieb of Tolono and Shirley Wiese of Rantoul.

The Booth Library Awards for Excellence in Student Research and Creativity program promotes and recognizes excellence in student research.

All entries were original works completed by EIU students within the last 12 months. The award recipients were selected on the basis of excellence, creativity and the use of research resources.

They were honored during a virtual ceremony.

Superintendents of Distinction are selected by their peers in each of the 21 different IASA regions based on leadership, communication, professionalism and community involvement.

“These extraordinary individuals truly provide exceptional leadership that elevates the success of students in their districts and are difference makers in their communities, ISAS Executive Director Brent Clark said.

New trustees sworn in at Parkland

Four trustees, tapped in the April 6 election, were sworn in to serve on the Parkland College Board, and officers were elected.

Voyles was appointed during a special meeting following Trustee Jonathan Westfield’s resignation from the board in March. Voyles will serve until the April 2023 election.

The board also elected officers, including Bianca Green as chairman, Jim Voyles as vice chairman and Jim Ayers as secretary.

In other business, the board appointed Mason Madigan as the new full-time Parkland College peace officer. Madigan was hired earlier in the month following nearly a year of service with the Champaign Police Department.

The Lincoln native graduated from Southern Illinois University-Edwardsville and completed training at the U of I Police Training Institute in 2020. He will complete his field training at Parkland within the next couple of months.

Ashton to head Danville school board

Randal Ashton was sworn in this week as the new Danville District 118 school board president.

The longest-tenured member of the board succeeded 12-year president Bill Dobbles, who headed the board for 12 years.

It marks Ashton’s second time serving as board president, having also held the office from 2007-2009. Voters elected him to his fifth term on the board April 6.

Sworn in as board members: Ashton, Darlene Halloran, Henderson and Schroeder.

It was the first in-person meeting of the board since the start of the COVID-19 pandemic.