Danville National Cemetery sits in the Meade Park neighborhood on the city’s east side. 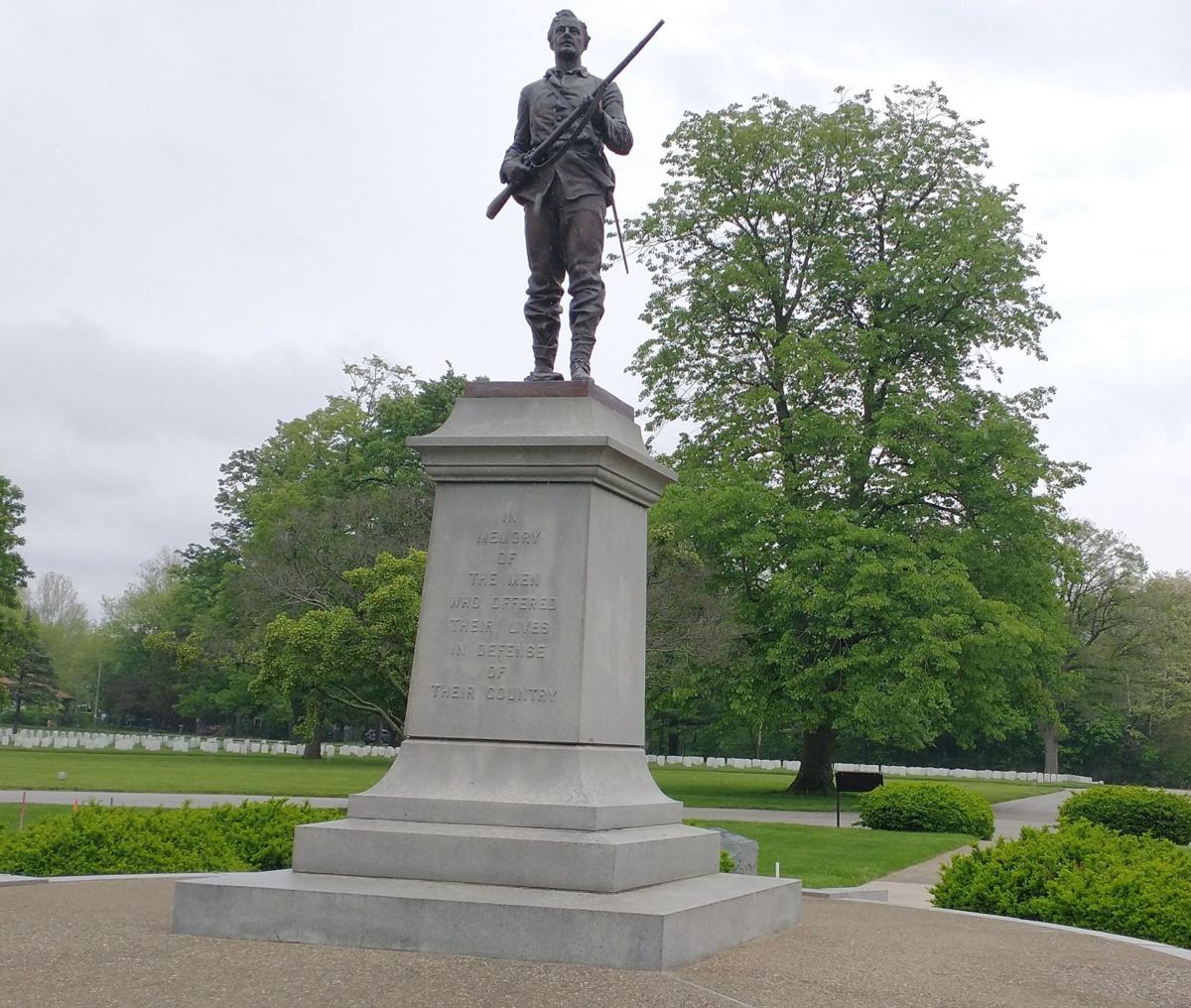 The 20-foot-tall Soldiers Memorial is shown at the center of Danville National Cemetery. Created by sculptor W. Noble Clark of Maine, it was dedicated on Memorial Day 1917. The inscription reads: ‘In memory of the men who offered their life in defense of their country.’

Danville National Cemetery sits in the Meade Park neighborhood on the city’s east side.

The 20-foot-tall Soldiers Memorial is shown at the center of Danville National Cemetery. Created by sculptor W. Noble Clark of Maine, it was dedicated on Memorial Day 1917. The inscription reads: ‘In memory of the men who offered their life in defense of their country.’

Joshua Friant is a man of few words, always the soldier who speaks in that short, clipped style of a military man. No extravagance or

floridity. The facts and not much more.

It’s far from the noise and chaos and flashes and explosions he saw in war — 18 months in Iraq, a year in Afghanistan. That’s where he was injured.

“I was in a Humvee rollover. Broke my back. Walked away from it. I broke my back in three places,” Friant recounts. “I walked around for two months, doing patrols, before I went to medical for it. That’s when they told me I couldn’t re-enlist. They tried to throw me out of the military right there and I fought it. I finished out my tour and they wouldn’t let me re-enlist.”

He worked at the Lincoln’s Challenge Academy in Rantoul and did some factory work. Three years ago, he heard about a job near his hometown.

“This job opened up and I got picked, so I just got lucky,” he said. Lucky, said the disabled veteran who has chronic backaches that prevent him from doing most of the fun things that other 35-year-old men get to do.

“This is a special place for me. I have friends who are buried here,” including a colleague who died in Iraq, Friant said. “The cemetery is a way for me to give back to the community, to still serve. I can’t serve in the military anymore. This is a place for me to still do some service.

“It’s like my little Zen garden, a garden of heroes.”

In 1897, a National Home for Disabled Volunteer Soldiers was established by Congress in Danville — a favor of office that future House Speaker “Uncle Joe” Cannon brought to his hometown. A year later, a small cemetery was established adjacent to the soldiers home for those veterans who had died in its care. Eventually, the small cemetery became 63 acres of hallowed ground for veterans and their family members.

Now, 123 years later, 35-year-old Friant is its program support assistant, which means he is the jack of all trades, the utility man at the national cemetery. He’s the man who greets you at the cemetery office, the one who prepares cases for those to be buried, sometimes conducts services, assists at burials and does some groundswork.

His boss is at Camp Butler National Cemetery near Springfield, an older, more prominent burial ground that during the Civil War was a military training camp. Today, it is the resting place for more than 25,000 people, including 866 Confederate prisoners. Some 12,000 people are interred at Danville National Cemetery, with about 200 burials a year, Friant said.

“I do all the services,” he said. “As long as the family doesn’t want to directly inter their loved one, if we have a service, I conduct it. Usually, I give openings, closings, ensure that there is no rowdiness, make sure that everything goes off correctly. It’s like being a music conductor; you’re making sure that everything goes off at the right time. It’s pretty interesting work.”

For a second year, COVID-19 has subdued the Memorial Day ceremonies at the cemetery, an authentic piece of Americana that usually includes flags, families, speeches, recitations and music by the Danville Municipal Band.

“We didn’t do it last year and we’re not having the full service his year,” Friant said. “But with all the COVID restrictions still in place, we’re not allowed to do that.

“I’m hoping it will all be back next year. I’m hoping to make it a big one and trying to get everyone I can involved.”

Tom Kacich’s column appears on Sundays in The News-Gazette. He can be reached at kacich@news-