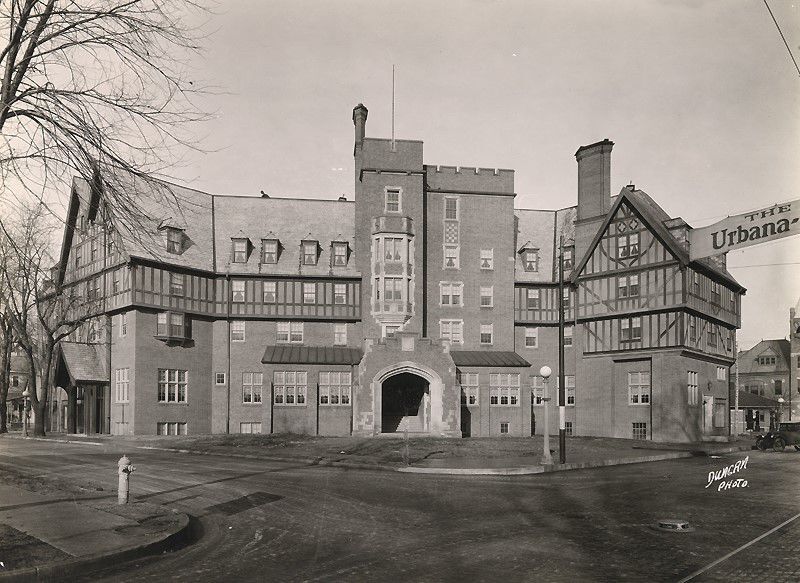 In July 1921, work got underway in Urbana on a plan to sell stock to build a downtown hotel that would match the accommodations for visitors to nearby cities.

Less than three years later, in January 1924, the Urbana-Lincoln Hotel opened at the corner of Green Street and Broadway Avenue.

In July 2021, work is underway to renovate the newly renamed hotel and reopen it in time for its 99th birthday.

The Hotel Royer is a nod to the Urbana-born architect who designed a host of local buildings, including the Champaign County Courthouse, the Illinois Traction Building, the Alpha Rho Chi fraternity house in Champaign, the Urbana Free Library and more.

“We wanted to pay homage to Joseph Royer, who designed the original hotel building and other structures in Champaign-Urbana,” said Haaris Pervaiz, a director at Icon Hospitality, the Chicago-based firm that will develop and own the refurbished hotel.

Interior demolition work and reroofing of the entire hotel structure has begun, Pervaiz said, and will soon be followed with exterior work and a gutting of much of the interior. The goal is to complete the work in late 2022.

It will be branded as a Hilton Tapestry Collection hotel, a group that includes more than

55 refurbished hotels in the United States and overseas. There will be 130 guest rooms and 8,000 square feet of meeting space in the hotel, Pervaiz said.

“I see this project as the first step in the revitalization of the 16-acre Lincoln Square site,” Urbana Mayor Diane Marlin said. “There are 100 years of memories associated with this historic hotel in the heart of downtown Urbana. People came here to celebrate life’s milestones — weddings, anniversaries, graduations, proms, promotions — and we look forward to creating the next 100 years of memories.

“It opened as the Urbana-Lincoln in 1924 and will reopen as the Hotel Royer, a fitting tribute to the prolific work of Urbana’s architect, Joseph Royer.”

The latest rebirth of the hotel, now on its fifth name, has not been without its problems. Icon bought the property for $1 million in January 2020 and had intended to start work on it last year but was delayed by COVID-19 and its effect on the hospitality industry.

That narrative parallels the story of the original Urbana-

Lincoln in the 1920s. Although organizers sold more than $223,000 in stock subscriptions (about $3.3 million in today’s dollars) to finance the project — each subscriber got a red, white and blue poster that could be displayed in their window that read “We have bought stock in Urbana’s new hotel” — that proved to be insufficient.

The hotel remained open through the downturn, but its owners didn’t pay off all its debts until December 1949, 25 years after it opened. New owners took over in 1954, leading to the hotel’s two best decades.

But it closed in 1975, only to reopen in 1977 when Peoria hotelier James Jumer bought it, refurbished it in a German style, built an addition onto the original structure and made it part of his chain of central Illinois hotels. But Jumer’s filed for bankruptcy in 1999.

The hotel has had a succession of owners and names since. But Icon Hospitality, with the assistance of more than $5 million in city funds, plans to restore it to close to its original exterior look.

The agreement with the city permits Icon to be reimbursed for $5.5 million of eligible project expenses upon completion of the project to be operated within the Tapestry Collection by Hilton, said Marlin.

The city will issue a bond and anticipates repayment over a 10-year period with revenue from hotel/motel taxes, food-and-beverage taxes, its boutique hotel tax and tax-increment-financing district revenue.

Pervaiz said care will be taken to make the exterior and much of the interior of the 2022 Royer look like the 1924 Urbana-Lincoln.

“The exterior structure, all the brick and masonry and millwork, will look much like it did originally,” Pervaiz said. “We’re going to upgrade the entryway to the hotel so that it will be a very lively, eclectic experience when guests enter and are greeted by our staff in the restored lobby.

“The public spaces will very much cherish the history of the hotel while guest rooms are getting a complete re-imagining.”

At one time, it was estimated that the total cost to rebuild and refurbish the hotel would be close to $20 million. Pervaiz said he didn’t want to offer a fresh estimate.

“There are a lot of moving parts still,” he said. “But it will be many, many millions.”

Tom Kacich’s column appears on Sundays in The News-Gazette. He can be reached at kacich@news-