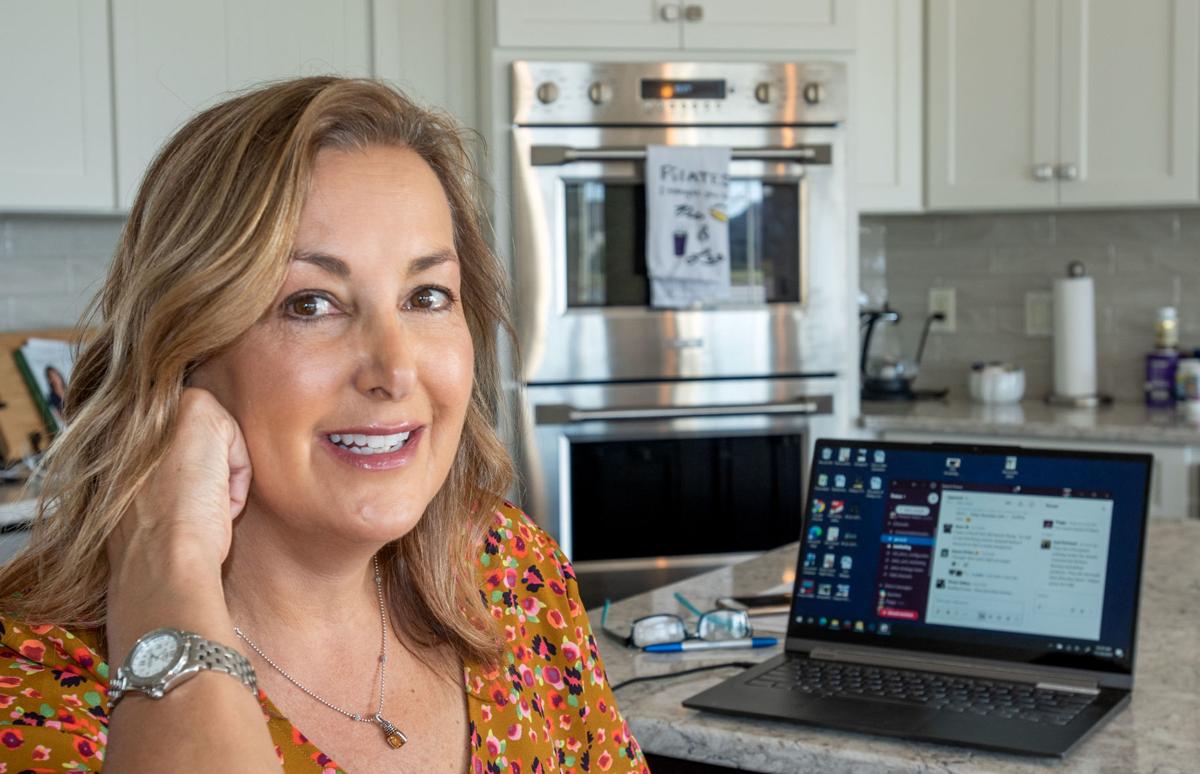 Peggy Prichard talks about her political leanings at her home in Champaign on Wednesday.

Peggy Prichard talks about her beliefs in her home in Champaign on Wednesday, Nov. 18, 2020.

“Republican women are a diverse group who may shy away from public debate, but that doesn’t mean we don’t have conviction in our beliefs. We are just tired of being bullied for having them.” — Anonymous conservative women everywhere.

My mother always told me to never discuss politics, religion or money, but there are times when it’s more important to stand up for your beliefs than follow polite protocol. I am treading into one of the three “no-nos” of polite conversation (sorry, mom) because I feel that people are being shamed and bullied for expressing their political views. This is causing a huge divide in our country and it’s only going to get worse if we don’t start treating each other with respect and common courtesy.

I am writing this from the perspective of a female Republican voter, although I realize that others may be having a similar experience. It’s not easy to discuss your political affiliation with a large audience (unless you are running for office) because, sadly, it feels as if you are baring your soul to judgment.

This is especially true when you are a conservative woman in the midst of a divisive political climate. In addition to being a member of the Republican Party, I’m also a wife, mother, businesswoman, volunteer and longtime resident of Champaign. I point this out, because people tend to paint others with a broad brush when it comes to politics and I am so much more than whom I vote for.

Being a conservative woman over the past several years has been complicated, to say the least. Like many people, I have good friends across the political spectrum and their opinions and viewpoints are important to me and have even caused me to rethink my positions on some issues while solidifying my stance on others.

I wish I could say that I’ve felt the same tolerance and interest for my views by those on the other side, but with a few notable exceptions, the give and take is not there. I’d love to bridge that gap and foster discussions that help us find common ground.

The past several years have been particularly contentious and I try to keep political discussions to like-minded people to avoid the inevitable arguments and what I like to call “conservative shaming.” As it turns out, I’m not alone in keeping my politics to myself. There is validity to the term “shy Trump supporter” and even moreso for women who are often expected to vote Democrat.

This is why the polls got it wrong in 2016, and again in 2020. With exception of the office of the President, Republicans did well in this election, winning many House, Senate and local elections across the country. There are a lot of “shy” conservative voters for sure and a lot of them are women.

The bullying does happen.

It happens virtually and it happens in person.

A friend of mine, who asked to remain anonymous, offered this insight: “I haven’t lost any friendships over this election because I keep my opinions to myself and share only with those who respect and uphold the same values. I have friends that talk despairingly about Trump supporters and place them all in a box. I remain silent. Why? Because I love my friends and I don’t want to lose them because we think differently, when ultimately we probably want the same things, we just have a different path to achieving them.”

Wouldn’t it be great if we didn’t have to worry about losing friends over differing political views? Think about how much we could learn from each other if we were willing to listen.

Businesswomen have similar concerns about sharing their political affiliation. According to Jill Guth, who owns a commercial real estate company, “being a woman business owner is very challenging during these times as expressing your viewpoint could dramatically impact your business and ability to contribute meaningfully to our community and economy.”

She also felt pressure to support racial causes on social media. “I was surprised when I was asked directly why I wasn’t supporting Black Lives Matter on my Facebook page. It’s not about posting something on Facebook and checking off that box,” she says, “it’s the things we do daily to support, assist and value all people and businesses that counts.”

I was motivated to write this article after reading a recent letter to the editor of this paper. The writer branded Trump supporters as “purely and simply evil." This kind of hate talk about an entire group of voters illustrates the need for all of us to look at the real reasons people voted as they did. Many voted for policies, not personality.

My friend Toni Lemmon is not shy about her political views and shares these thoughts: “I try hard to maintain my beliefs even though they aren’t always popular on social media. I don’t like the way Trump speaks, or agree with everything he did, but at the end of the day, he fought for the middle class. When I point out my beliefs, there never seems to be a middle ground because of the hatred some people have toward conservatives. I have been called a racist many times because of this.” Once again, name-calling rears its ugly head and civil discussion loses.

I have also had jarring experiences on social media. During a Facebook thread prior to the 2020 election, someone stated “all college-educated white women will vote Democratic in this election." I replied, “I won’t," and got the reply; “too bad — and your vote doesn’t count anyway because you live in Illinois.”

While they were right about the conservative vote not counting in Illinois, there should be no assumption of how people will vote based on their demographic. Nor should there be shaming or bullying. But the bullying does happen. It happens virtually and it happens in person.

We don’t have to end friendships
and cancel people over politics.

My friend Carol Stanek is like a lot of Republican women who consider themselves fiscally conservative and socially responsible. Like Toni, she isn’t shy about sharing her political affiliation and will support candidates with yard signs and bumper stickers.

She was once harassed by a woman who didn’t like the Rodney Davis bumper sticker she had on her car and proceeded to scream at her for having the audacity to support a Republican candidate. This type of behavior is so common that I have to wonder if people really think they are going to change minds or if they are just out to harass and intimidate.

A good friend once told me: When the name calling starts, the argument has been lost.

This type of intimidation affects younger voters as well. A young professional who voted for Trump admitted that “the constant barrage on social media saying that you are not supporting women if you vote conservative adds pressure to keep quiet about your beliefs.” We need to set a better example for our young people as this is quickly devolving into attacks on free speech and fuels the cancel culture.

In addition to hate letters to the editor and social media bullying, the ever-popular “if you voted for Trump, immediately unfriend me” Facebook post (which surfaced during the 2016 election) has reared its ugly head again. This seems to be a way of saying, “I do not value your friendship enough to be willing to allow you to have differing political views."

It’s really hard for those who have friends across the political spectrum to know how to react. Do we say nothing and honor their request to unfriend them? I personally wish we could all be more tolerant of other’s opinions and act like adults. If we don’t agree with someone’s post, we can offer our opinion (preferably without hate and judgment), or we can scroll on by, agree to disagree, and go on with our lives. No harm done.

It also needs to be pointed out that some media outlets play a role in exacerbating divisiveness. How many of have watched the news only to become incensed with the perceived wrong-doing of the “other side?” How often do we do our own fact checking and not rely on the media to form our opinions?

We don’t have to end friendships and cancel people over politics. I know that half of the country is not inherently evil because they voted for someone the other half doesn’t like. If we read that again from the viewpoint of the “other half," we may learn something about mutual tolerance. As a country, we can do better.

What happens when people aren’t
shown tolerance for their beliefs?

We can also give credit where credit is due. We have elected record numbers of women and minorities from both parties to political office. We don’t have to agree with their platforms, but we can all agree that women are making great strides. And yet there is still animus when the “other side” succeeds.

When Amy Coney Barrett was sworn in to the Supreme Court, the Girl Scouts of America sent out a congratulatory tweet with an image of all five female justices. They quickly retracted their post after receiving flak from liberals for “supporting” a conservative justice. They then received flak for from conservatives for retracting the post. Talks of boycotting thin mints ensued.

The real losers in this situation are the young girls who witnessed grown women fighting over which women deserve to be celebrated and which ones don’t. Instead, we should be teaching them to have the confidence to speak their minds and to have the tolerance for other’s opinions.

It’s important to ask the question: What happens when people aren’t shown tolerance for their beliefs? When they are shamed or bullied? One answer is that people will retreat to safe spaces and surround themselves with others who view the world from the same lens. When this happens, we all lose the opportunity to participate in discussions that help us grow.

Let’s not let that happen. Let’s stop the shaming and the name-calling and allow everyone the right to their own political views without fear of retribution. Let’s listen to each other without judgment.

Peggy Prichard is a native of Champaign and works in aerospace marketing. She and her hubby have two adult children and two spoiled dogs. In her spare time she reads, bakes, teaches group exercise and binges on news and Netflix. She writes about random things at middlemindblog.com.