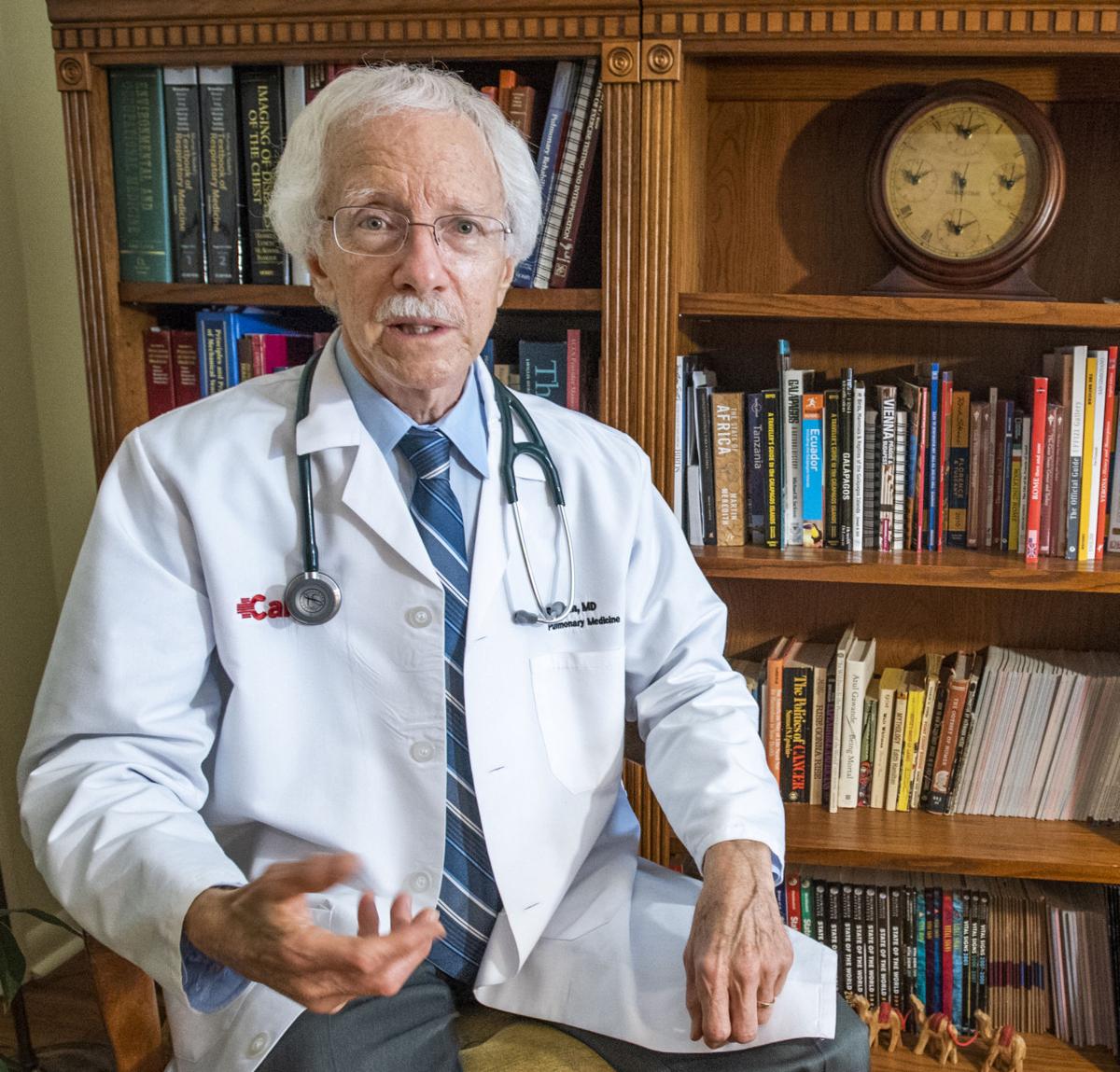 Carle pulmonologist Dr. David Main talks about the effects of climate change on human health at his home Friday in Champaign. 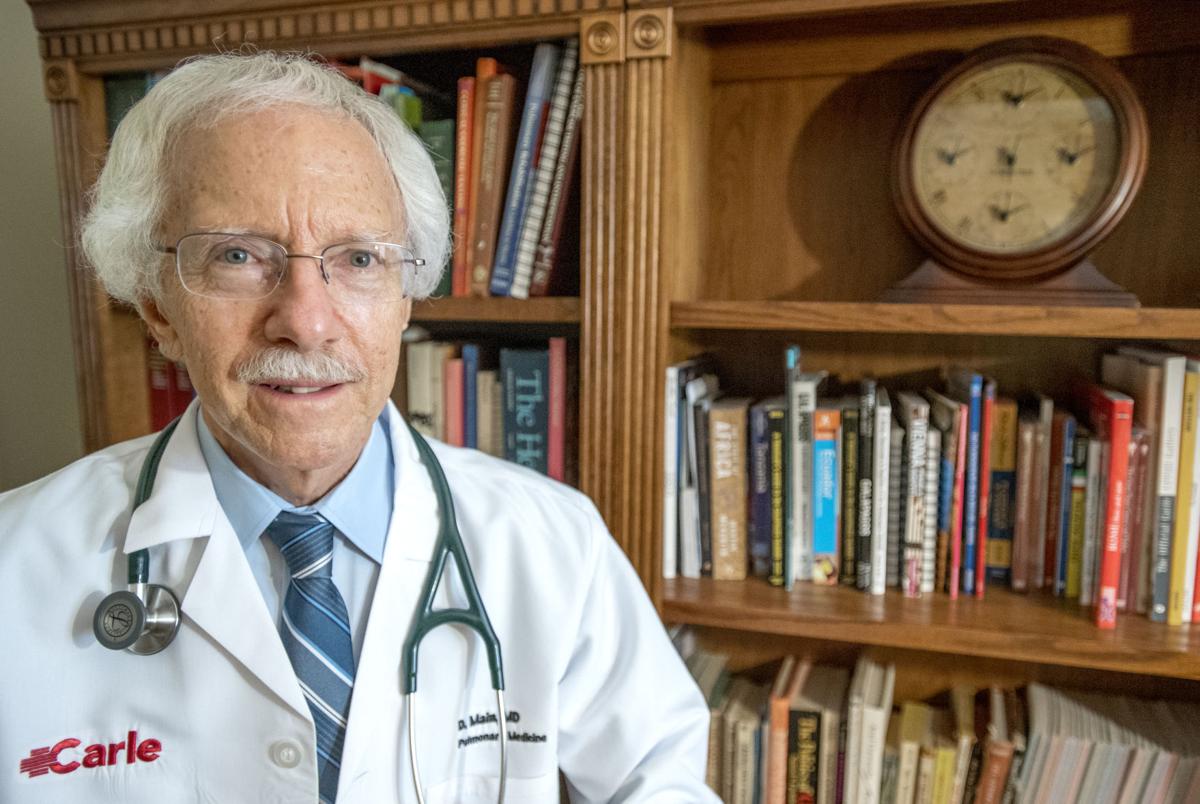 David Main, a Carle doctor of pulmonary medicine, talks about the effects of claim change on humans at his home in Champaign on Friday, August 13, 2021.

Carle pulmonologist Dr. David Main talks about the effects of climate change on human health at his home Friday in Champaign.

David Main, a Carle doctor of pulmonary medicine, talks about the effects of claim change on humans at his home in Champaign on Friday, August 13, 2021.

Writing as a C-U physician born and raised in Danville, I feel compelled to share my observations about the health effects of climate change with others in East Central Illinois.

First of all, climate change is a paramount threat to human health. If not contained, climate change stands to outrank all other health problems in importance, with the possible exception of nuclear war. Unfortunately, we doctors and nurses are not able to solve climate-change problems through our skills as health care providers. We recognize that climate change can only be prevented by people making lifestyle changes that minimize human impact on the environment, temperature rise in particular.

high temperatures and record-low water levels, all of which are now common. Fluctuating water levels in Lake Michigan threaten to affect Chicago’s future. Haze and smoke from historic fires in the west are clouding our skies. We only have a few years left to act if we are to affect change.

The just-released United Nations Climate Report makes it clear we need to halt further global warming now. This trusted institution is warning us that we are at “code red” for humanity, which is the highest level of alert.

When humans inhale air contaminated with coal and natural-gas emissions, they take into their lungs dangerous pollutants that affect health and well-being. Among these effects are increased rates of asthma and chronic obstructive pulmonary disease due to nitrogen oxides, ozone and particulate matter; lung cancer due to particulates, hydrocarbons and other pollutants; heart attacks and arrhythmias due to nitrogen dioxide and particulates; and neurological problems due to mercury.

The transition from greenhouse-gas-emitting power generation to clean-energy production via solar, wind, geothermal, hydroelectric and biomass is already occurring. However, market forces alone are slow and unable to respond quickly enough to the onslaught of climate change.

An example of this slow response in Illinois is the continued operation of the Prairie State Energy Campus. As Illinois’ largest coal plant, it is the largest single source of carbon dioxide in the state and among the top 10 in the U.S. It also emits large amounts of dangerous pollutants such as those named above.

Given the slowness of market forces and the urgency of addressing climate change, we must consider additional remedies. In Illinois, the General Assembly has the opportunity to pass important energy legislation that promotes rapid transition away from fossil-fuel use along with other important measures; as citizens of Illinois, we have an imminent opportunity to expedite this clean-energy transition by urging passage of this bill, Gov. J.B. Pritzker’s Clean Energy and Climate Bill.

It provides for the following:

All of these provisions will help hasten our transition to a clean-energy future.

This week’s United Nations report concludes that we humans have altered our environment at an unprecedented pace and risk catastrophic impacts in the absence of greenhouse-gas reduction. If we are to continue to live as we are accustomed, we must embrace the changes necessary to limit goal warming.

U.N. Secretary General Antonio Guterres could not be more clear when he stated, “There is no time for delay and no room for excuses.”

I encourage readers to immediately contact their state legislators. In Champaign and Vermilion counties, call state Sen. Scott Bennett, D-Champaign, at 217-355-5252 or email him at senatorscott

bennett@gmail.com. Tell him your concerns about global warming and climate change and urge him to support Pritzker’s comprehensive clean-energy bill, which will phase out coal by 2035 and natural gas by 2045, including the Prairie State plant.

Dr. David M. Main is a physician of pulmonary medicine at Carle Foundation Hospital in Urbana.