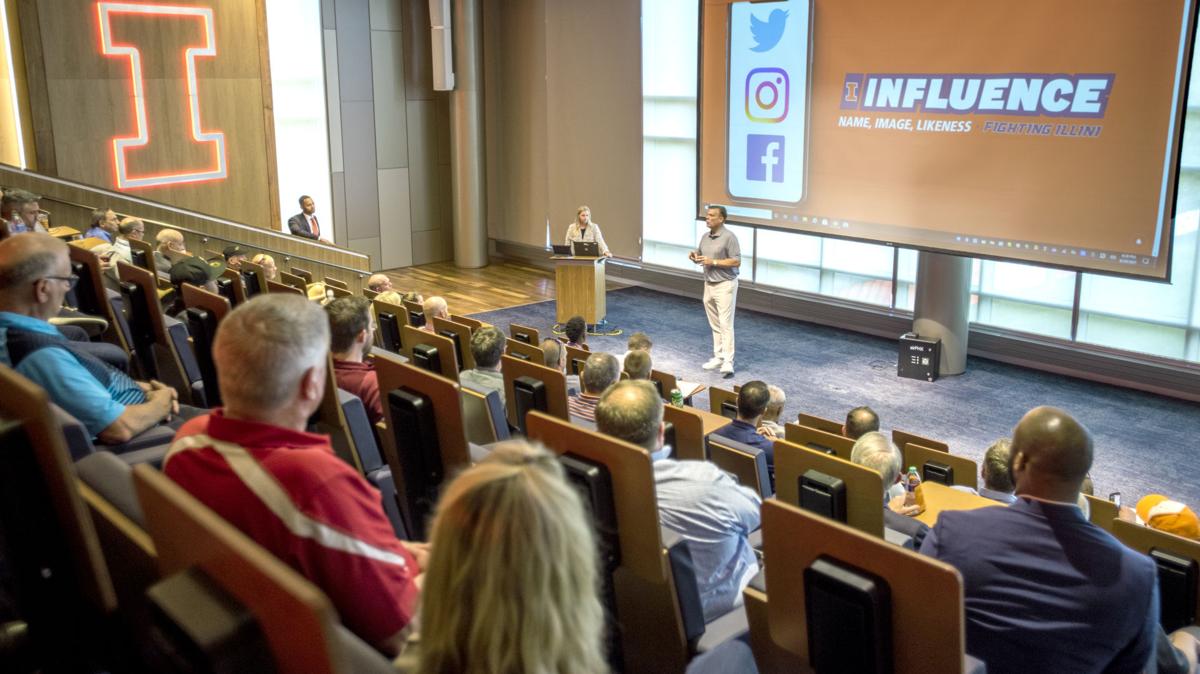 University of Illinois men’s basketball coach Brad Underwood talks to local business leaders about the Student-Athlete Endorsement Act at an open house June 29 at the Smith Football Center on campus in Champaign. 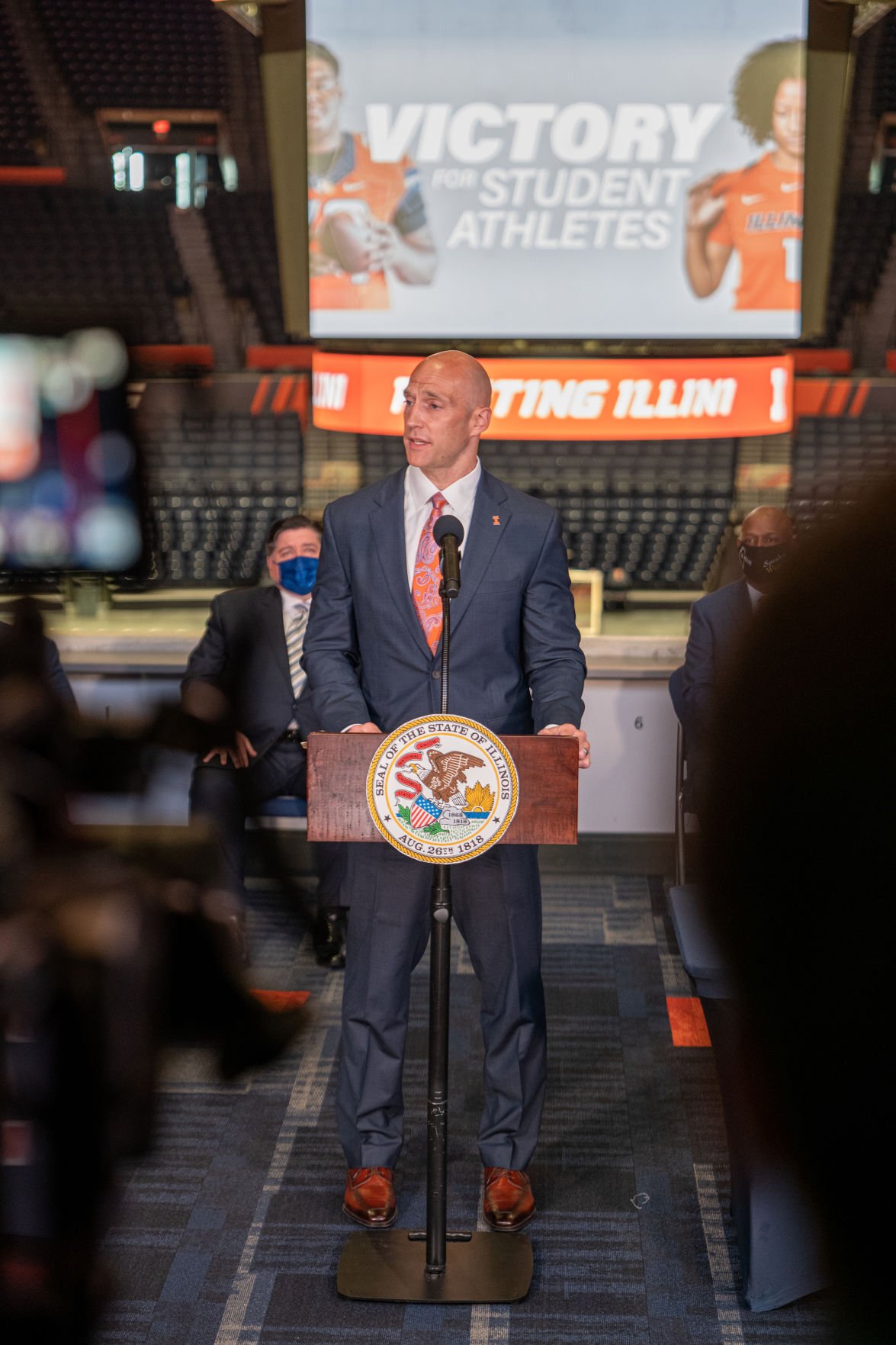 University of Illinois athletic director Josh Whitman speaks at an event June 29 at State Farm Center in Champaign before Gov. J.B. Pritzker, sitting behind him, signed a bill to let college athletes profit off their name, image and likeness.

University of Illinois men’s basketball coach Brad Underwood talks to local business leaders about the Student-Athlete Endorsement Act at an open house June 29 at the Smith Football Center on campus in Champaign.

University of Illinois athletic director Josh Whitman speaks at an event June 29 at State Farm Center in Champaign before Gov. J.B. Pritzker, sitting behind him, signed a bill to let college athletes profit off their name, image and likeness.

Just days after the NCAA changed it rules in late June to let college athletes seek endorsement deals, a college quarterback in the South announced a sponsorship deal with a beverage company.

About the same time, another college football player, a wide receiver in the South, signed an endorsement deal with a national retailer.

In both cases, the players wore clothes without university logos in the photographs they posted on their social media as they promoted the companies.

Not so with another football player — a quarterback in the Southwest — who got use of a new car from a dealership for standing next to one of its cars in a photo on his social-media page. Instead of plain clothes, he wore a polo shirt with his university’s logo.

The story was similar at another school in the South, where a dealership provided a car for a star basketball player. He also wore a polo shirt with his university’s logo in a photo he posted on social media promoting the dealership.

The dealerships that traded vehicles for publicity got to associate with not only the athletes, but also their schools.

The photos of the players wearing clothes with their universities’ logos could give people the impression that the colleges — and not just the athletes — endorse those products. And therein lies the problem.

As an expert on regulatory issues in sports, I have provided education for various colleges’ athletic departments on how to deal with the new landscape for college athletes now that they can seek paid endorsements. I see a lot of opportunities, but potential problems as well.

A question of competition

Since the NCAA permitted college athletes to monetize their own name, image and likeness — often abbreviated as “NIL” — athletic departments have been trying to craft policies to govern the practice. While many schools were reluctant to allow athletes access to university logos, other schools have been permissive in creating policies that allow easier access to school intellectual property.

These developments have created a situation where access to university branding could influence where athletes choose to play.

This could result in a shift toward more permissive access to school logos, particularly if schools believe access to their branding for commercial purposes will appeal to recruits and enable them to make more money.

However, there is a Catch-22 when it comes to NIL. Schools have primary responsibility for crafting NIL policies. For that reason, they are responsible for deciding whether to discipline an athlete for breaching the rules, not an organization like the NCAA.

One hypothetical question is: Does a school really want to bench its star quarterback when he appears on Instagram in a school-branded polo promoting a pizza chain that is a competitor to one the school has a sponsorship with?

While some schools, mainly in states that had NIL laws with a known effective date of July 1, prepared programs to educate their athletes about rules for endorsements, the new rules left some trying to develop policies on the fly.

As University of New Hampshire law Professor Michael McCann highlighted in an article two weeks into the brave new world of NIL, schools are facing a number of challenges. Among the most pervasive, he says, is the “use of school marks, logos and other intellectual property in NIL deals.”

McCann detailed a split among schools, with some choosing to allow athletes permissive access to university marks, whereas others, including the University of Illinois, take a more restrictive approach, fearing that allowing the use of school logos could draw undesirable associations.

Schools face a balancing act in navigating the new NIL landscape. What started as an effort to provide greater economic freedom to college athletes evolved into state lawmakers trying to ensure that in-state schools are not left at a recruiting disadvantage.

Different colleges permit different things. For instance, Clemson University’s NIL policy states: “The use of Clemson’s intellectual property (logos, designs, photos, etc.) for NIL activity is not permitted at this time.” On the other hand, schools like Syracuse University have allowed college athletes to license school logos for their NIL activities.

Permissive access to school marks could lead to a temporary recruiting advantage, as recruits might be tempted to seek opportunities that allow them to maximize their earning capacity during college. For this reason, I think it is likely that schools will need to become more accommodating with their logos in order to be competitive on the recruiting trail.

The NCAA is holding out hope that Congress will impose some level of uniformity over NIL, but the legislation has stalled. In the meantime, schools will likely be left with the primary responsibility for regulating NIL activities.

Because of the financially driven nature of college sports, schools may decide to let athletes use their brand for endorsement deals out of fear that if they don’t extend this benefit to athletes, the next college will.

John Holden is an assistant professor in the Department of Management in the Spears School of Business at Oklahoma State University in Stillwater. He wrote this for The Conversation, an independent and nonprofit source of news, analysis and commentary from academic experts.