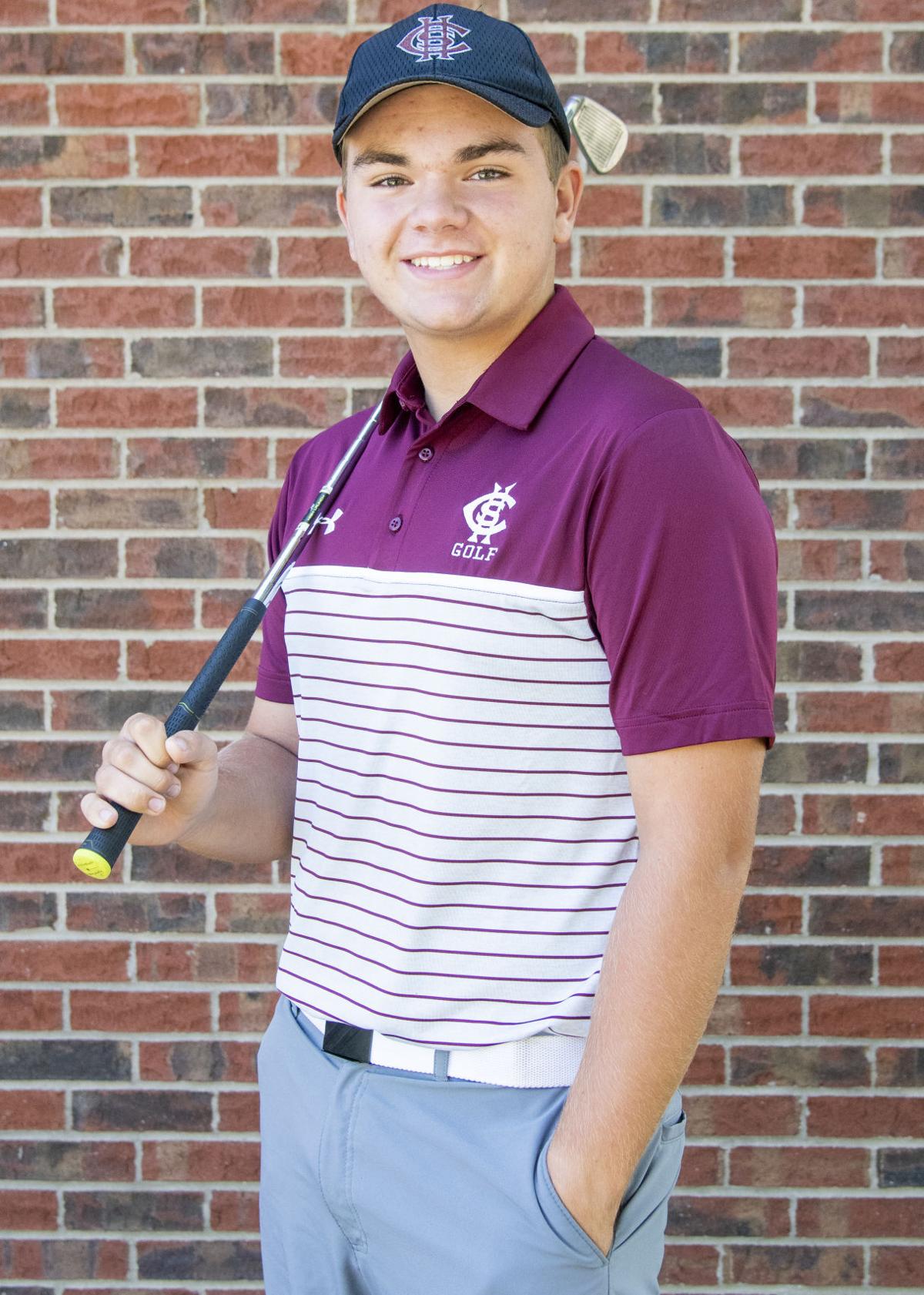 Wade Schacht, Central, golf, Faces of Fall at the News-Gazette in Champaign on Sunday, August 16, 2020. 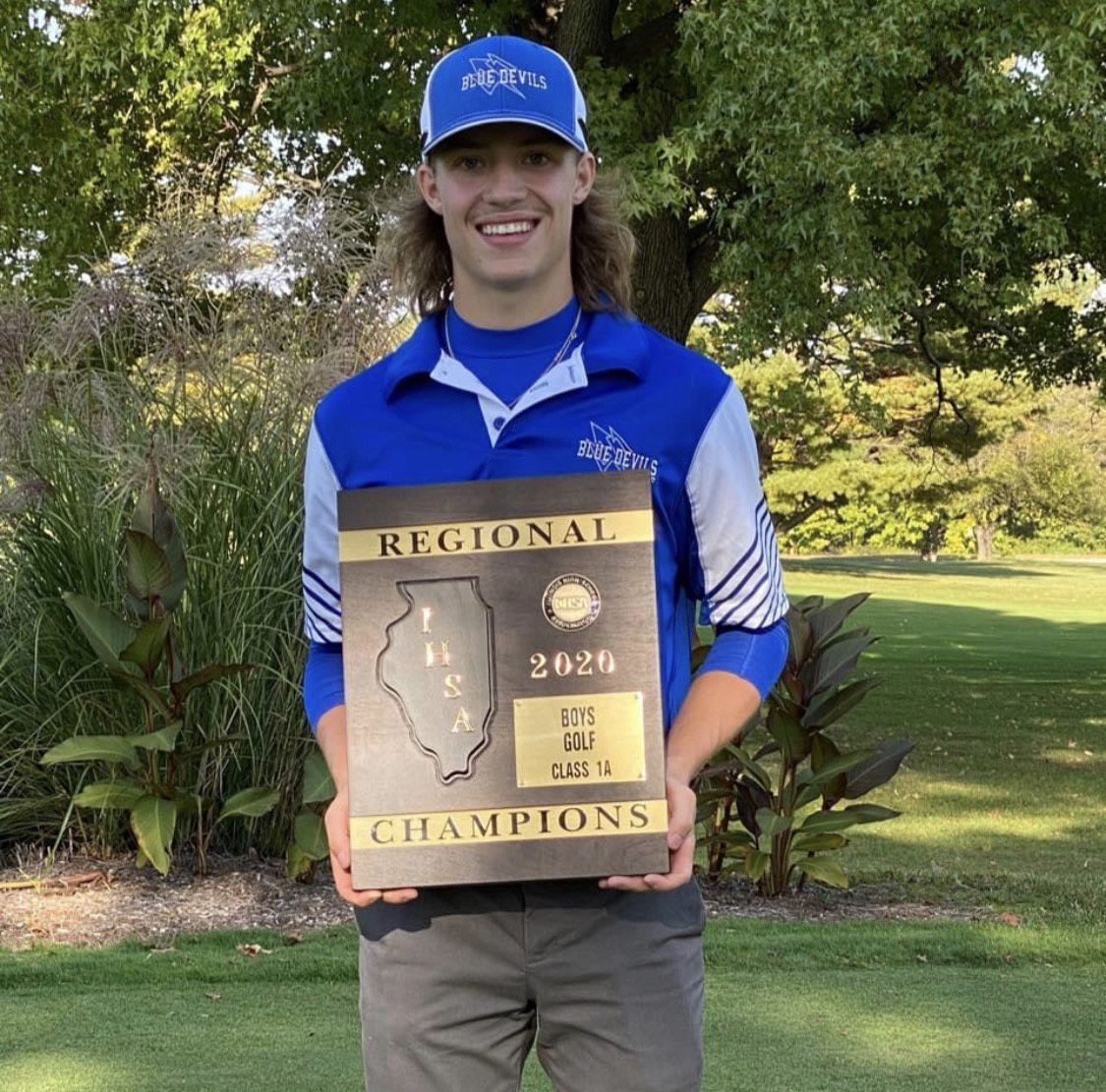 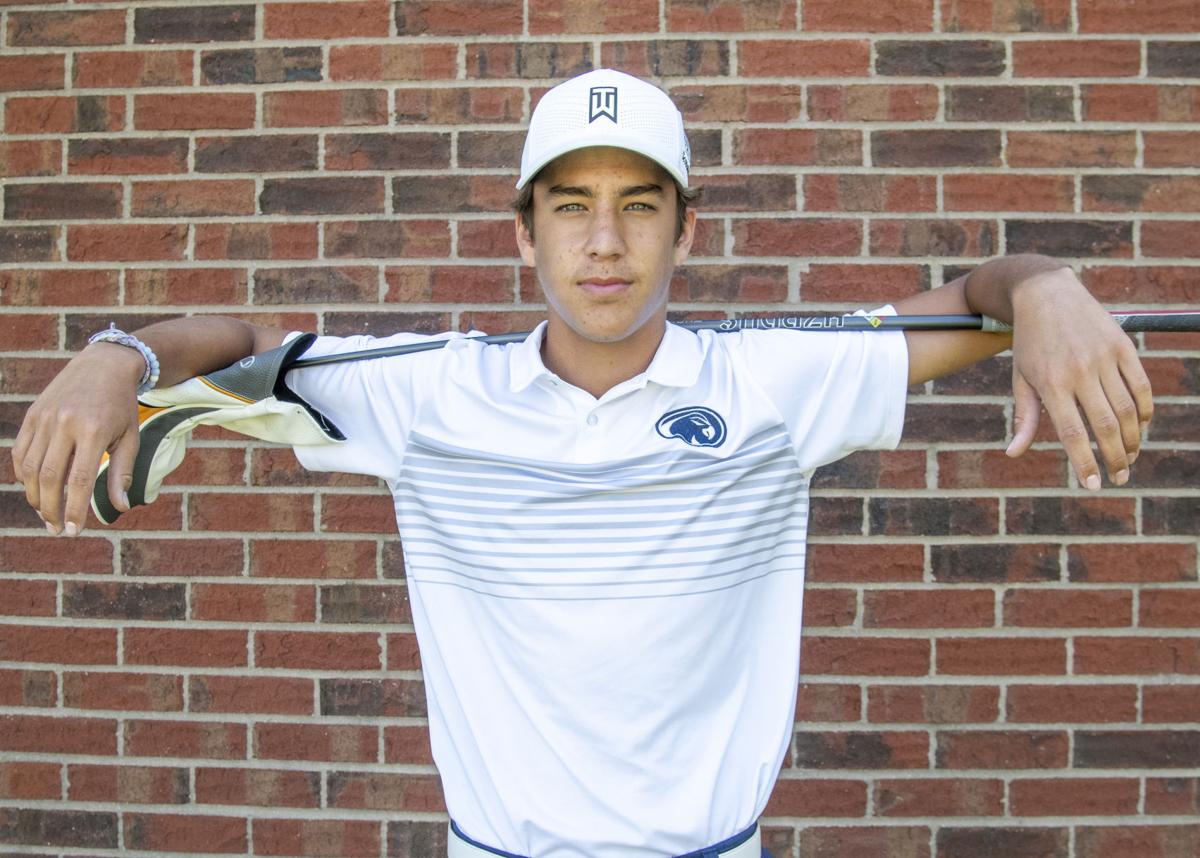 Payton Dunahee, Prairie Central, golf, Faces of Fall at the News-Gazette in Champaign on Sunday, August 16, 2020. 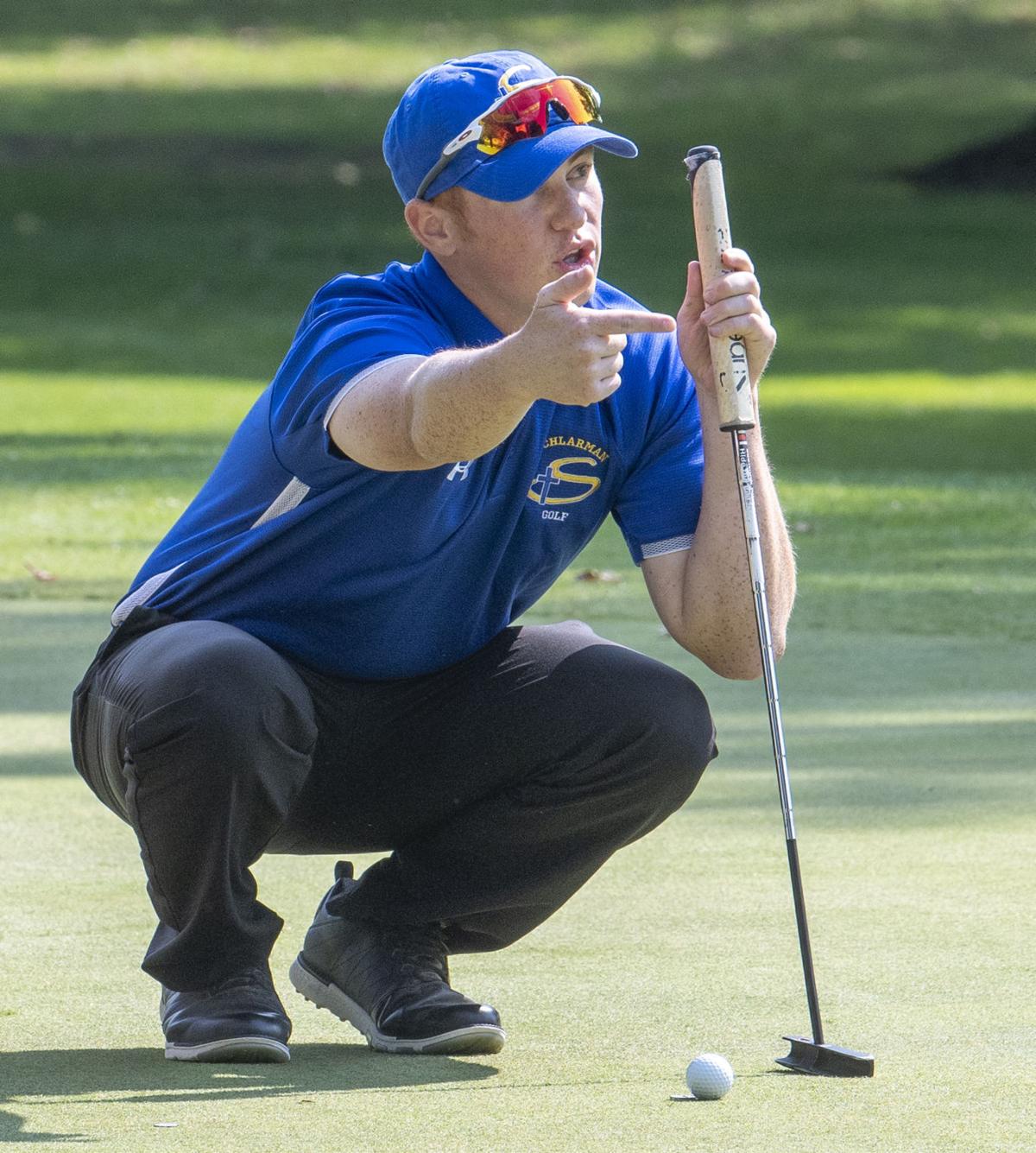 Schlarman senior Gabe Huddleston surveys the green on the fourth hole at Danville Country Club in Danville during Tuesday’s Class 1A boys’ golf regional. Huddleston was the individual medalist for the third-place Hilltoppers, who finished behind Bismarck-Henning/Rossville-Alvin and St. Thomas More in the team chase. Huddleston’s score of 76 allowed him to advance to the sectional round. 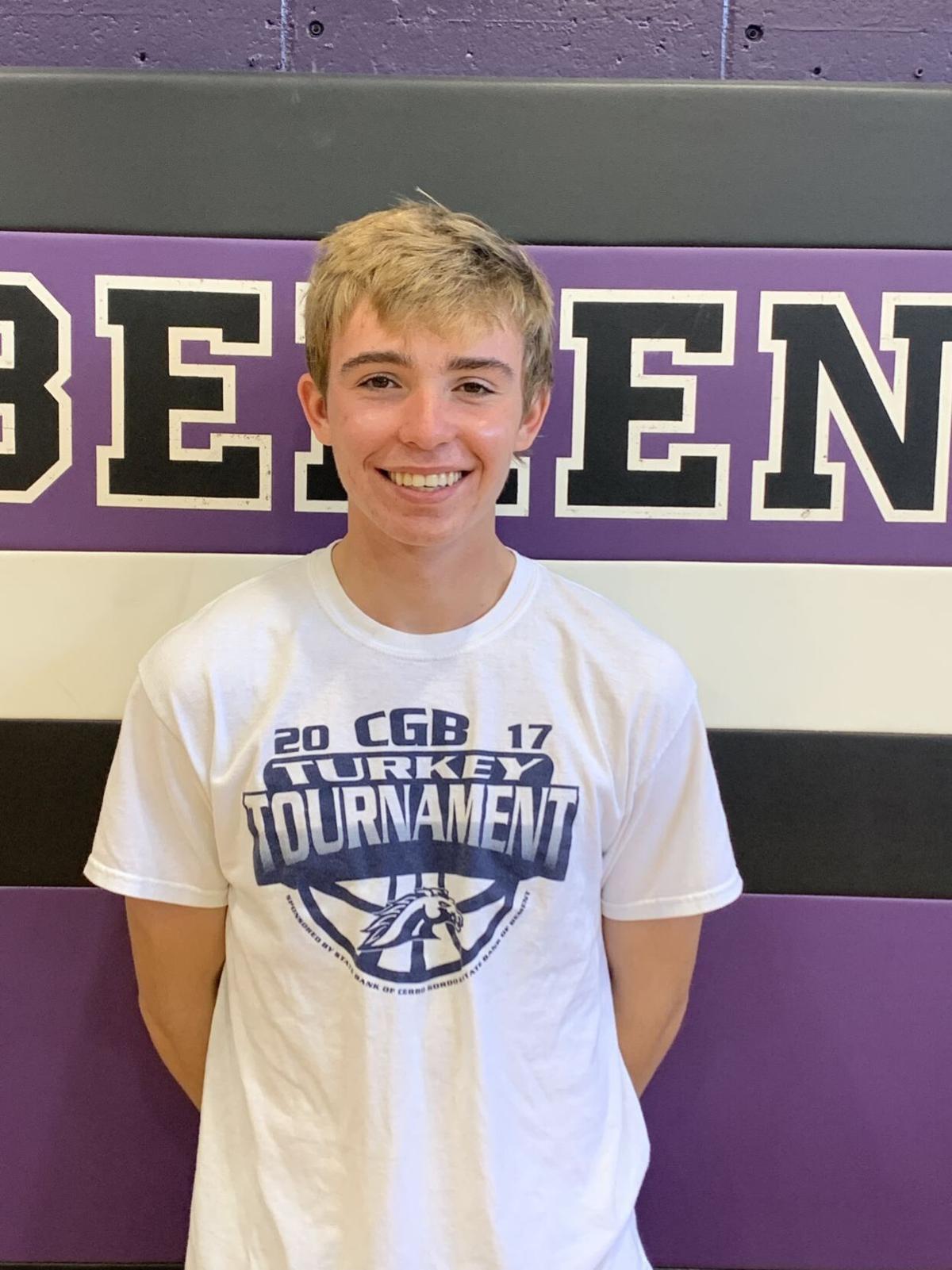 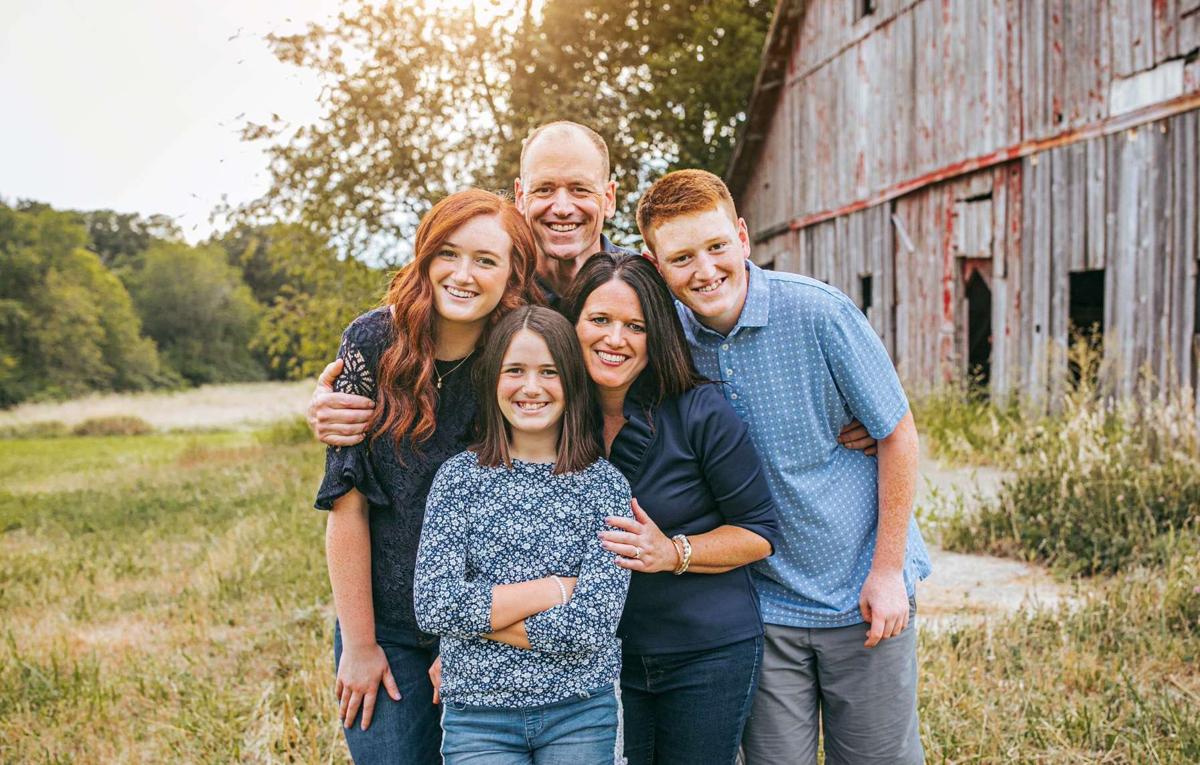 Monticello boys’ golfer Will Ross, far right, with his family.

Why he made the first team: The senior transfer from Schlarman made a quick impact on the Blue Devils, leading them to a Class 1A regional title with a seventh-place finish on that stage and finishing the season with a nine-hole stroke average of 38.0.

Why he decided to play golf in high school: “My grandpa taught me to play when I was about 6 years old. I always loved golf, and I wanted to continue playing in high school so I could stay busy in the fall.”

His top highlight of the season: “When I holed out from 74 yards away for birdie. Also, winning conference and regionals as a team. We did a great job picking each other up, and if someone wasn’t doing good, then another person would step up.”

The most challenging part of his season: “I struggled with putting this season. I progressed as the season went on, and I was getting very comfortable with it.”

His favorite event of the season: “The Paris Invite at Eagle Ridge. I played with a great group of guys, and it was an all-around good day.”

What it meant to compete during the pandemic: “Having a season was huge to me because I wanted to play my last year of competitive golf.”

His top career golf accomplishment: “Shooting 1-over par because that was my best score for my high school career, which was very exciting for me because my goal was to shoot 1-over or lower for the season.”

A golf accomplishment on his radar: “I want to get a hole-in-one as well as shoot 5-under par. Hole-in-ones are a very good achievement for anyone, and shooting 5-under par is pretty hard to do, but I don’t feel like that is too far out of my reach.”

Why he made the first team: The senior frequently paced a loaded Hawks lineup, turning in top-10 finishes at both his Class 2A regional (seventh) and sectional (ninth) as Prairie Central won a team plaque in the former postseason event. Dunahee carded a nine-hole average of 39.0 in the regular season and 40.0 during his regional and sectional competitions.

Why he decided to play golf in high school: “Because my brother played.”

His top highlight of the season: “Winning conference. My whole family got to watch me win for the first time.”

The most challenging part of his season: “Keeping hope for our season to keep going. Not having state was heartbreaking.”

His favorite event of the season: “Conference. I knew I was going to have everyone coming for me after winning last year.”

What it meant to compete during the pandemic: “It was very positive for me and made life a lot more fun and easier to live during this time.”

A golf accomplishment on his radar: “I hope to play Division I golf.”

Why he made the first team: The senior was consistently dominant for a relatively young group of Hilltoppers that missed sectional advancement by just one stroke. Huddleston qualified individually by winning his Class 1A regional before placing 15th at the subsequent sectional, and he recorded a nine-hole average of 38.4.

Why he decided to play golf in high school: “I love competing and it gave me an opportunity to help build a championship-caliber program with a core group of friends.”

His top highlight of the season: “Getting my first win of my golfing career, at the Vermilion Valley Conference Tournament at Harrison Park — which had seemed to be my Achilles heel, so to speak, for the better part of my high school career.”

The most challenging part of his season: “Adapting to the regulations that were put in place by the IHSA to keep those participating in sports safebecause I had played golf a certain way and to have that abrupt change took some time to get used to.”

His favorite event of the season: “The Vermilion Valley Conference Tournament, not only because it was my first career win but because our team had a chance to three-peat.”

What it meant to compete during the pandemic: “The impact of getting a golf season means a lot, but what means most was that it was done safely.”

His top career golf accomplishment: “It wasn’t winning or even getting to play. This season enabled me to help lead our team and guide the youth of our program in a direction to not only play better golf, but also to teach them key elements that I have learned in a way that can help them in all facets of their lives.”

A golf accomplishment on his radar: “To play golf at the collegiate level. While golf is a great sport and I love the game, I wish to use it as a means to help pay for my education and build real-world relationships to help those around me.”

Why he made the first team: The senior and All-Area second-team twin brother, Luke, spent their last season as the entirety of the Bulldogs’ team producing even more success. Zach Rogers notched a nine-hole average of 39.0 that included a Class 1A regional medalist honor and a 12th-place showing at his sectional.

His top highlight of the season: “My brother and I placing first and second at regionals. This was something special that I did not expect. I remember the night before, being nervous for me and for him. To play as well as we did ... it’s something I’ll never forget.”

What it meant to compete during the pandemic: “The season being held had a positive impact on me and my outlook on the school year. I would have been disappointed if I would have been able to go to school but would not have had a golf season.”

His top career golf accomplishment: “Almost qualifying for the U.S. Junior Amateur last year. This proved to me I had the game to compete beyond the high school realm.”

A golf accomplishment on his radar: “My current goal is to continue building my skill set and seeing where the game takes me. I hope to one day be better than my Uncle Kurt was in his heyday. Some of the readers may know him; he worked at Champaign Country Club for a handful of months this year.”

Why he made the first team: The sophomore formed a potent trio with teammates Tanner Buehnerkemper and Matthew Erickson, heading that group with a nine-hole average of 39.9. Ross collected fifth place at his Class 1A regional, in which the Sages took second, and was 34th at his sectional.

Why he decided to play golf in high school: “Since I was in middle school, I’d been looking forward to the chance to play in high school. I looked up to our last state-qualifying team that placed fourth in 2016. It influenced my decision to play high school golf.”

His top highlight of the season: “Our match against Gibson City-Melvin-Sibley. As a team, we were down going into the last three holes on a course most of us had never played before. It was really intense and competitive. Tanner Buehnerkemper and I were encouraging and pushing each other to win each of the last holes. The best part was that we ended up winning, and all of our teammates were cheering for us on the ninth green.”

What it meant to compete during the pandemic: “I was very happy because I knew that we would be competitive as a team this year at every level, so I’m very grateful we had the opportunity to play. It was also nice for our seniors — and for the seniors from other schools. Some are close friends that I play with in tournaments outside of the school season. After seeing them work hard all summer, I’m glad that they didn’t miss out on their final year of high school golf.”

His top career golf accomplishment: “Placing second in conference this season. I wasn’t where I wanted to be during the conference meet last year, and performing well at conference was one of my goals for this season.”

A golf accomplishment on his radar: “I want to qualify for the state tournament and place top five. Playing varsity the past two seasons has allowed me to grow into a leadership role heading into my junior season. I need to improve areas of my game, and I want to be a role model for the kids coming in to keep our program strong and competitive.”

Why he made the first team: The sophomore and our Golfer of the Year kept up the tradition previously set by former Maroon three-time Golfer of the Year Justin McCoy, securing the area’s best nine-hole average at 37.7 while offering beyond-his-years leadership to a young roster. Schacht tied for first at his Class 2A regional, taking second in a four-way playoff for the outright title, and took 25th in his sectional.

Why he decided to play golf in high school: “It has always been a dream of mine to represent Central since I started playing tournaments when I was 5.”

His top highlight of the season: “The four-way playoff (for medalist) at regionals. Although I came in second, it was still an incredible experience playing with so many people watching and such high pressure. Also, that putt to extend it was pretty nice.”

The most challenging part of his season: “Staying motivated during long breaks.”

His favorite event of the season: “At Monticello for a dual. I love that course, and I never mind a round in the red. ”

What it meant to compete during the pandemic: “It meant a lot for my mental and physical health, giving me goals and a social outlet.”

His top career golf accomplishment: “Winning the State Farm Youth Classic in 2019 with a score of 69 on the second day.”

A golf accomplishment on his radar: “My only goal left in high school golf is to win state.”

The Champaign Central sophomore recorded a nine-stroke average below 38, but his passions extend beyond the golf course and into the realm of theater.

Meyer led the Raiders to their first-ever regional championship by balancing the talents of a competitive lineup.