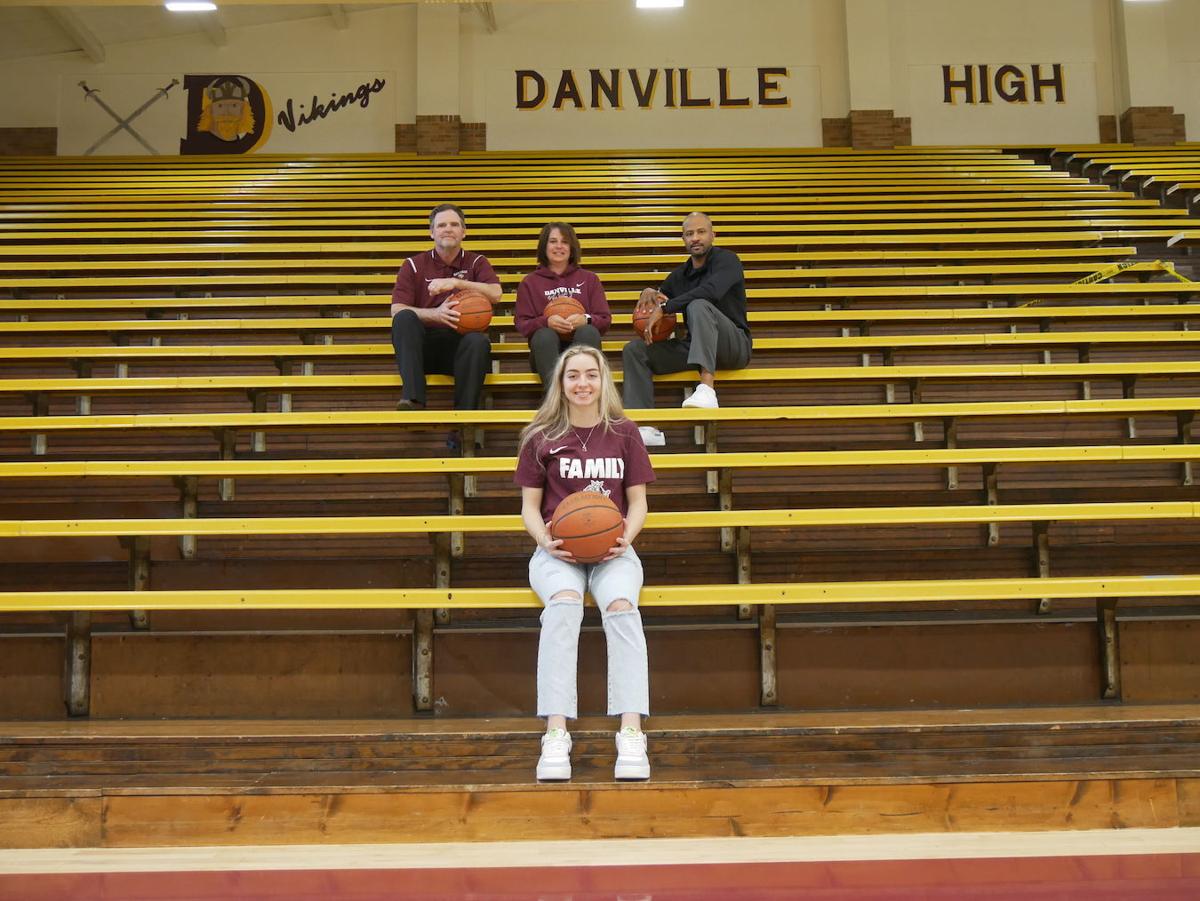 Danville girls’ basketball player Erin Houpt, foreground, is flanked by, from left, father Ted Houpt, mother Erin Houpt and trainer Keith Peoples on Monday inside the Danville High gymnasium. Erin Houpt is the 2021 News-Gazette All-Area Player of the Year after averaging 27.6 points, 6.8 rebounds, 2.3 assists and 2.9 steals as a senior. 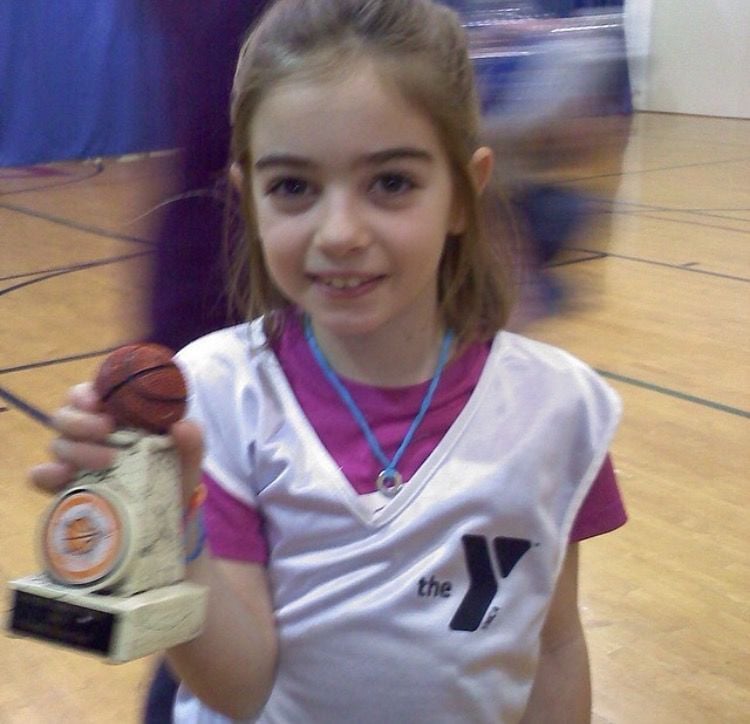 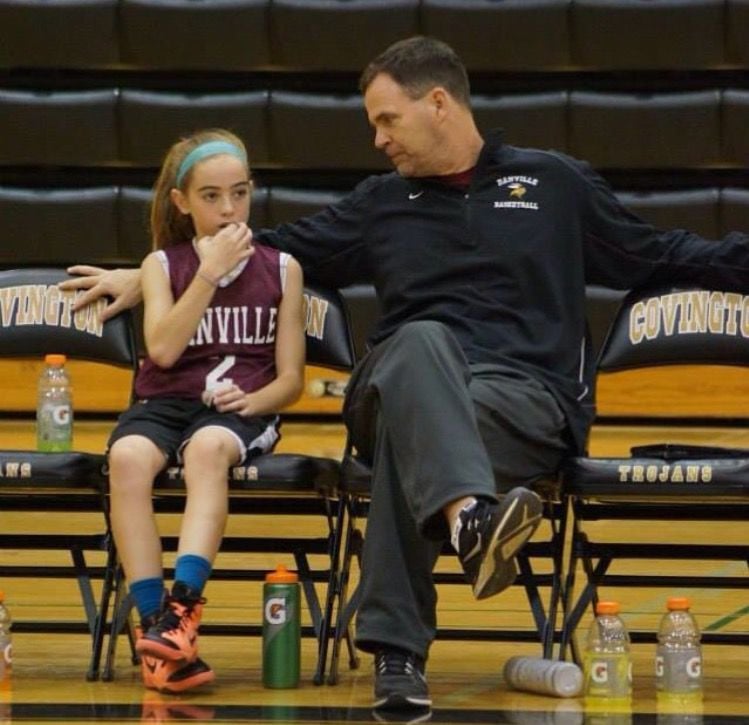 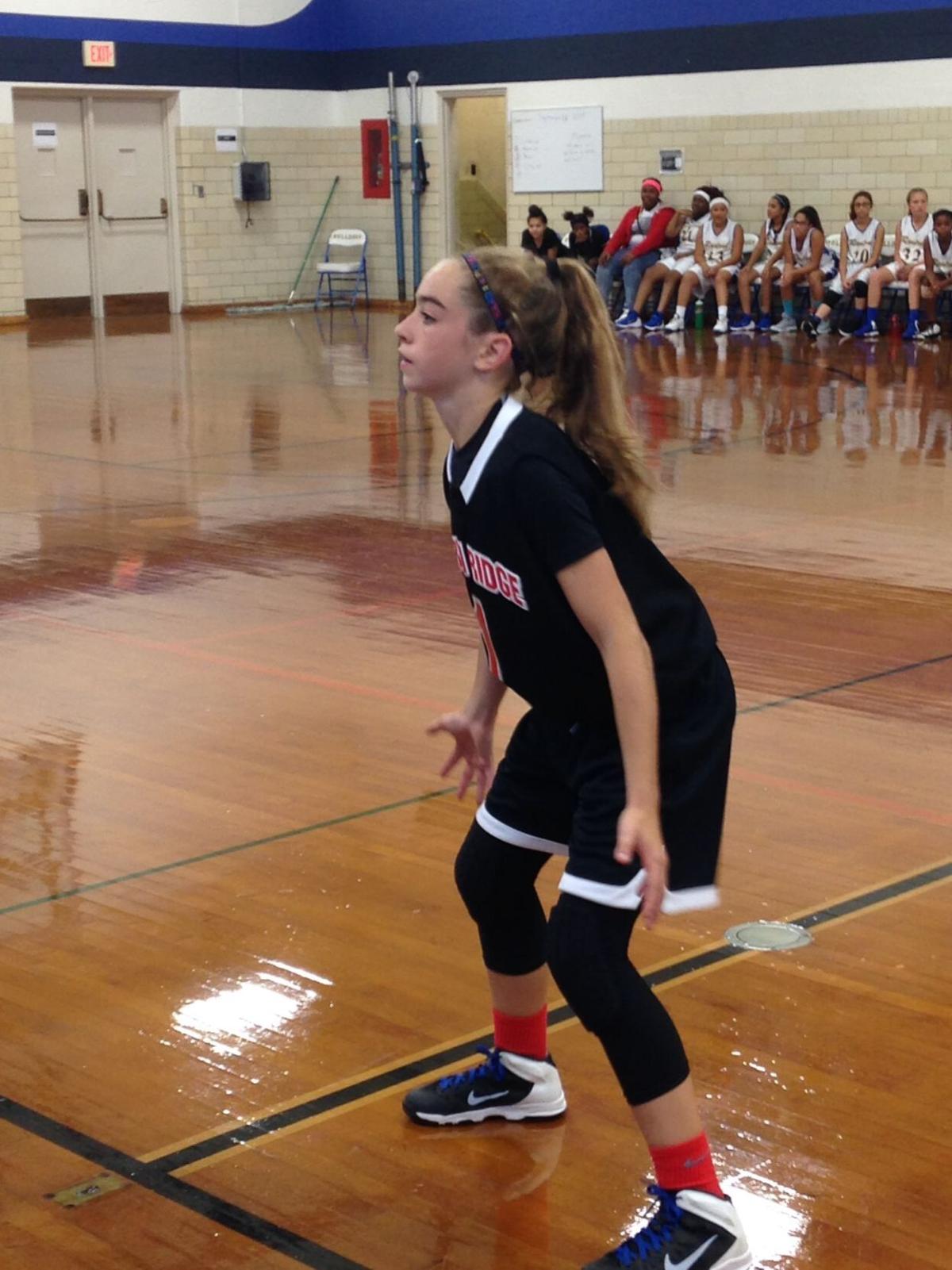 Erin Houpt is seen playing for North Ridge Middle School as a seventh-grader.

Danville girls’ basketball player Erin Houpt, foreground, is flanked by, from left, father Ted Houpt, mother Erin Houpt and trainer Keith Peoples on Monday inside the Danville High gymnasium. Erin Houpt is the 2021 News-Gazette All-Area Player of the Year after averaging 27.6 points, 6.8 rebounds, 2.3 assists and 2.9 steals as a senior.

Erin Houpt is seen playing for North Ridge Middle School as a seventh-grader.

The Danville senior guard earned 2021 News-Gazette All-Area girls’ basketball Player of the Year status not through one singular moment.

The Mercer signee’s final batch of high school statistics speak for themselves — 27.6 points, 6.8 rebounds, 2.3 assists and 2.9 steals per game for an 11-3 Vikings team that competed with a seven-person roster and still qualified for the Big 12 Conference tournament championship game.

For Houpt to reach those figures and be in position to play at the Division I level took more than a lone decision. More than a specific a-ha moment.

The 5-foot-6 Houpt became Danville basketball’s all-time leading scorer — with 2,208 points — and the leader of local girls’ hoops through a combination of family, wise decision-making and relentless athletic drive.

“It means a lot because there’s a lot of younger girls probably looking up and trying to achieve the same type of thing,” Houpt said, “so I hope I left a good legacy behind.”

The Houpt name is intrinsically linked to basketball in the Danville community.

Erin’s father, Ted, is one of six brothers who played for the Vikings. The family fielded a team in Danville’s Dustbowl basketball tournament for many years.

“I’ve always just been around it,” Erin said. “But when my dad started coaching — I think I was in fourth or fifth grade — that’s when it really started. I was in the gym with him all the time.”

Ted oversaw the Danville boys’ program between 2012 and 2019, coaching Sean along the way.

Ted’s first three seasons in charge of the Vikings were filled with challenges, as the program finished several games below .500 each time.

Erin never let him dwell on difficult defeats for too long.

“There’s never been one time in my life where I said, ‘Erin, we need to go to the gym. I need to take you,’” Ted said. “We had some tough seasons, and you leave the gym and the last place you want to be is that place that when you’re losing feels like a jail. And I remember going home and Erin says, ‘Can we go to the gym?’ And I’m like, ‘You can’t be serious.’”

Ted said he recognized Erin’s passion for basketball as soon as she began dribbling.

He credits her innate talent in that department for initially getting her hooked on the sport.

“If you do something well and people praise you and you get attention, then I think it just sort of feeds it,” Ted said. “It’s really cool when it’s your kid and everybody goes, ‘Wow, watch Erin.’”

Erin said her relationship with her father was enhanced by basketball. And she affirms that neither Ted nor mother Kathy Houpt ever forced her to work on her basketball skills.

That was something Erin felt she wanted and needed to do.

“It’s very important,” Erin said. “They’ve just supported me through everything and been by my side.”

One of Ted’s brothers also played a big role in Erin becoming the on-court presence she is today.

Bill Houpt isn’t a coach like Ted, but that hasn’t stopped him from imparting meaningful advice upon Erin.

“He always worked on my shot with me and made it perfect,” Erin said of Bill. “I still go to the Y with him all the time and work on my shot.”

When Kendle Moore was named 2017 News-Gazette All-Area boys’ basketball Player of the Year, he spoke in an ensuing story about all of the connections he’d made while living in Danville.

“Everybody knows everybody,” said Moore, now a guard at Colorado State.

Erin’s basketball journey contains a similar thread. It’s fitting that she not only trained with Moore before he graduated from Danville, but that she also took Moore’s spot as the Vikings’ all-time leading scorer, across both genders, back in February 2020.

“I’ve worked out with a lot of different people,” Erin said. “I always try to find different workouts. It doesn’t matter who it’s with. So if I go to the Y and there’s people working out, I’ll just jump in.”

Some of Erin’s other primary workout partners are fellow Danville seniors Tevin Smith and Nate Hoskins.

Being friends with the latter connected Erin to Hoskins’ father, Brandon, with whom Erin trained during the COVID-19 pandemic before the Danville girls began their condensed 2021 season.

“She just always wanted to work,” the elder Hoskins said. “The things I worked on with her must’ve interested her. ... I never called her or nothing.”

Hoskins said his main focus was “trying to get her to finish a little better around the rim,” though he added he doesn’t want to change anything about Erin because “she’s always been a great shooter.”

“She’s a bucket-getter,” Hoskins said. “She’s got a knack for scoring. I don’t know how she does it sometimes, but she gets it in.”

The idea of Erin driving into the paint might seem misplaced given her slight frame. But not to Erin and those who know her best.

“I hoped maybe I’d grow and get a little bigger since my dad’s really tall and my family members are tall,” Erin said. “Once I hit high school I was like, ‘OK, I’m probably not going to grow anymore.’ So I’ve always had to find different ways to create different things.”

That shows on the stat sheet. Erin attempted and converted plenty of three-pointers, finishing 41 of 95 this season for a 43.2 percent success rate. But she also earned trips to the free-throw line on a regular basis.

“I’ve always been like that and just not afraid ... of contact,” Erin said. “That’s one thing that’s helped me a lot. ... I’d go into the defense and get fouled.”

Erin acknowledges that training with the likes of Moore, Smith and Nate Hoskins better prepared her for any physicality she might face.

An addendum to that is Erin’s connection to Murad Abbed, a physical education teacher and assistant basketball coach at Bismarck-Henning/Rossville-Alvin.

And while Erin’s impressive statistics dominate talk around Danville girls’ basketball, they’re not the only reason the Vikings fared well in its 2021 season.

“So the freedom ... that she was given, she was really responsible with it,” Ted said. “She didn’t try to score every time. She made an effort to get other people involved.”

Considering all of the names already mentioned in Erin’s extended basketball family, it’s hard to believe her web of connections extends even further.

The former Schlarman girls’ basketball coach — a two-time Class 1A state titlist and three-time All-Area Coach of the Year with the Hilltoppers — is renowned for his training of girls’ basketball players throughout Vermilion County.

And, of course, Erin.

“I’ve played with her dad during the Dustbowl (and) his brothers. Genetically speaking, Erin is gifted,” Keith Peoples said. “But genetics can only get you so far. It takes work. And that’s one thing that’s special about Erin: She’s willing to put in the necessary work. Erin has never been the type of player to come into the gym and take extra shots. It’s a big difference between extra and necessary. Every time Erin came into the gym, it was with a purpose.”

Erin began training with Peoples in third grade, surrounded by like-minded athletes who wanted to stake a claim as the area’s top basketball player before moving on to bigger and better goals.

“That’s what was pushing us, working together,” Erin said. “(Peoples’ training was) really good for me and all the other young girls in the area because he pushed us really hard and told us it’s OK to make mistakes.”

In fact, Peoples encouraged his athletes to make mistakes — Erin among them.

“You set the bar so high ... that it’s difficult to achieve. Takes the kid completely out of their comfort zone,” Peoples said. “She spends a lot of time working on her craft. That’s why she’s so successful.”

Did Erin anticipate the level of greatness she achieved at Danville High School?

“I wasn’t exactly having the leading scorer thing as a goal,” Erin said, “but I had goals just to be great and stuff like that.”

Erin’s success didn’t include many team-based accolades. Competing in Class 3A or 4A postseason brackets was a daunting task, and the Vikings never made it past a regional championship game during her high school career.

“It would be nice to have a state championship. ... But there’s a lot of people that work hard that don’t get a state championship,” Ted said. “Erin had a great experience. It wasn’t perfect, nor should it be. That’s part of the process, and I think that’s what helped build her character.”

Peoples contends that Erin’s ability to improve those around her, such as Conaway and Allen this season, adds to her legend.

“Erin has very been responsible,” Peoples said. “She could’ve went completely off the grid and became a very selfish individual. But that’s just not Erin.”

To that point, Brandon Hoskins said he wouldn’t be shocked if Erin considered running a Danville-based basketball camp once her playing days conclude.

“A little girl like Erin, 5-foot-whatever, you can make it if you work hard,” Hoskins said. “If they see somebody like her come back ... and (she) has something for them to do, that’ll inspire the girls.”

Good news for those up-and-coming players: Erin’s fully on board to giving back to a Danville community that’s supported her during each step of her basketball journey thus far.

“I definitely would,” Erin said. “I have thought about, after graduating college, just to do camps and stuff like that and work with the younger girls.”

His Storm compiled a perfect 13-0 record and won the Vermilion Valley Conference title in the process.