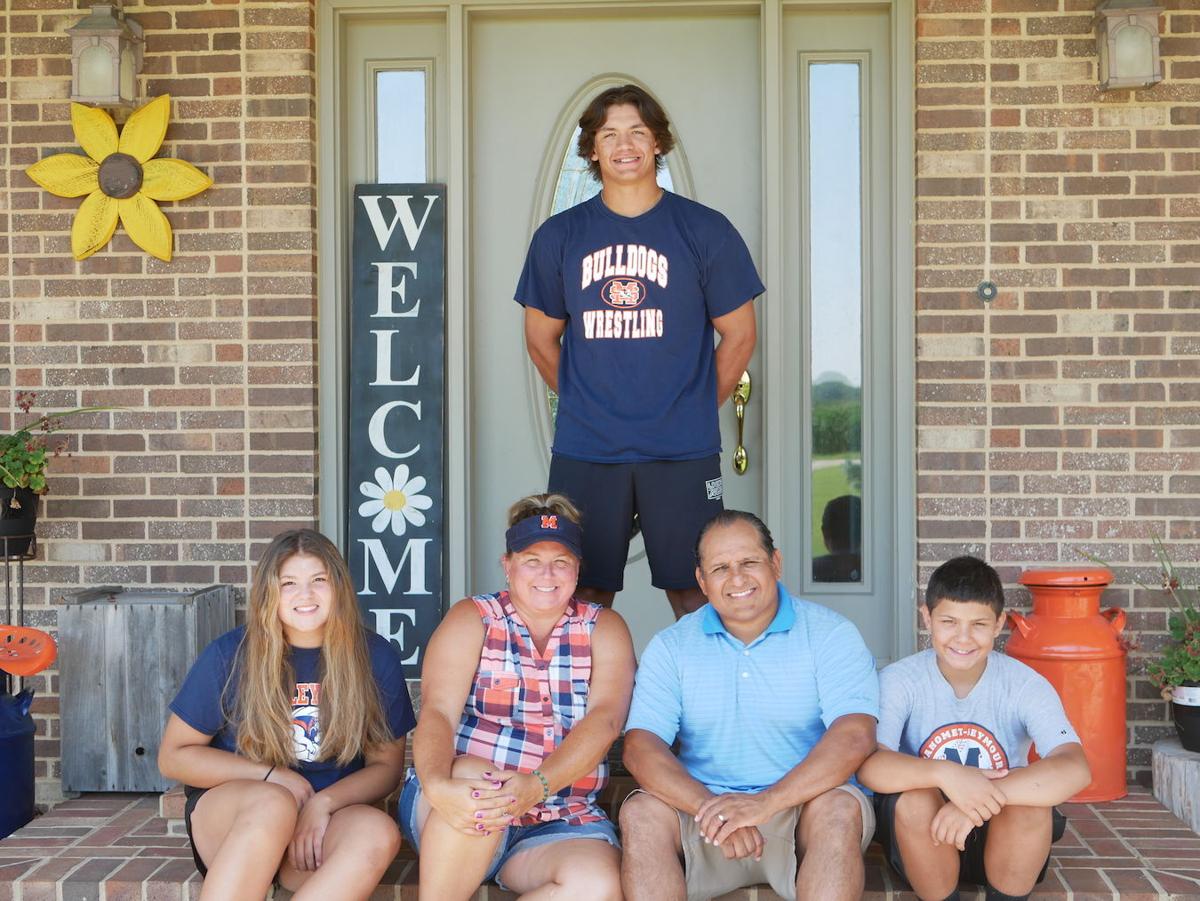 Mahomet-Seymour wrestler Mateo Casillas stood head and shoulders above the rest of the area wrestling competition this spring, but the Casillas family — from left, sister Rio, mother Kris, father Dan and brother Marco — is there to keep Mateo grounded and on track. ‘They’re just always there trying to help you,’ Mateo said. 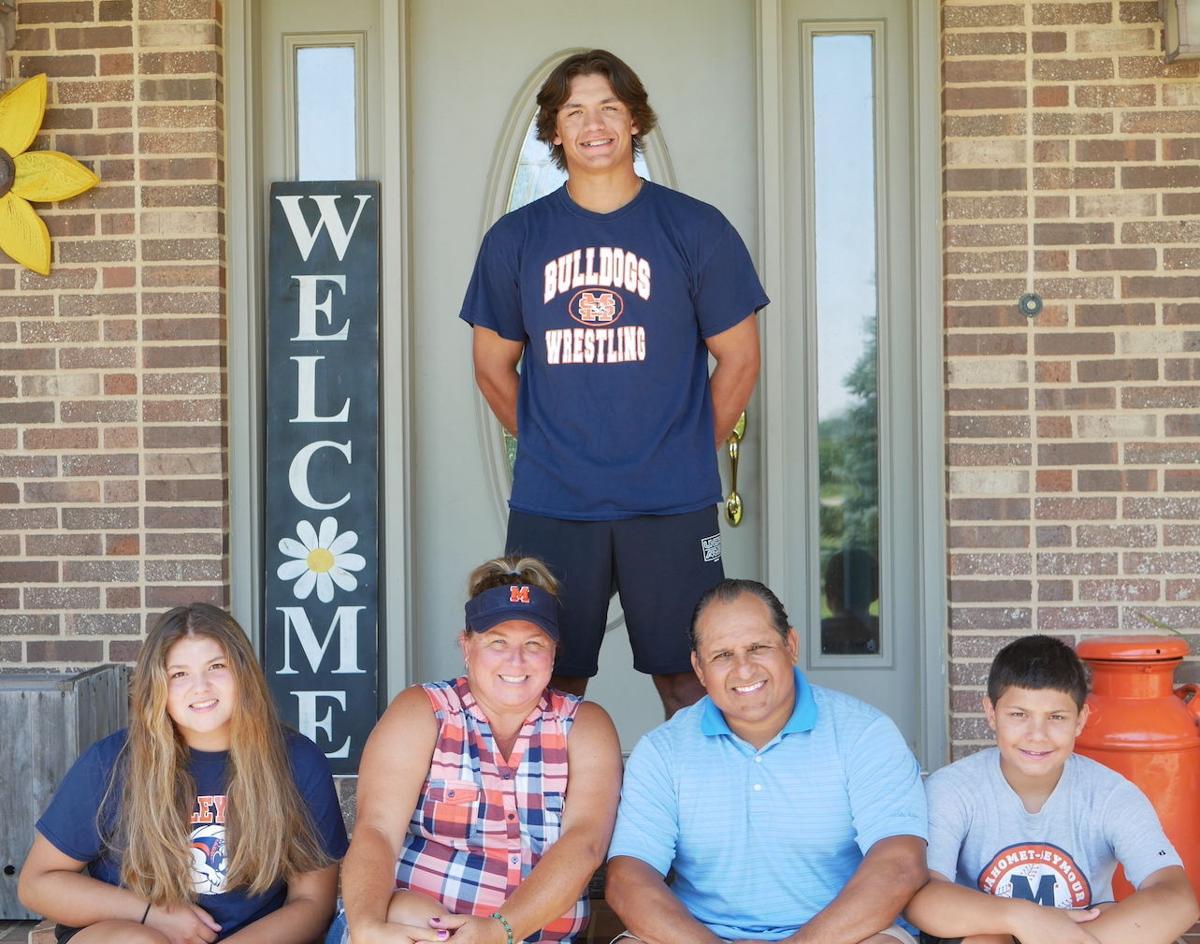 Mahomet-Seymour wrestler Mateo Casillas stood head and shoulders above the rest of the area wrestling competition this spring, but the Casillas family — from left, sister Rio, mother Kris, father Dan and brother Marco — is there to keep Mateo grounded and on track. ‘They’re just always there trying to help you,’ Mateo said.

MAHOMET — Mateo Casillas isn’t afraid of working hard to get where he wants to be as an athlete.

His parents, Dan and Kris, aren’t afraid to push their son toward achieving his sports goals.

That ensured the perfect combination was in place for Mateo to potentially become a standout high school competitor. In any sport of his choosing.

And, boy, has Mateo chosen quite a few sports.

Baseball. Basketball. Football. Even cross-country, which he ran in eighth grade to train for basketball.

Perhaps Mateo needs those 500 different things to focus upon, though.

Enter his 2020-21 school year at Mahomet-Seymour High School. As a sophomore, he played football and baseball.

Wrestling’s a sport Mateo briefly left behind in his younger years. A sport he wasn’t even sure he’d take up when he entered high school.

But Mateo loves wrestling too much. He had to get back on the mat.

Now, he’s the 2021 News-Gazette All-Area Wrestler of the Year.

Despite balancing simultaneous high school wrestling and baseball seasons that coincided with the back half of a football campaign and a severe lower-body injury, Mateo was nearly perfect on the mat.

He finished 27-1, his lone loss coming by a 3-1 decision to Washington junior Donnie Hidden in the Illinois Wrestling Coaches and Officials Association Class 2A 195-pound state championship match in late June.

It didn’t matter, as Mateo rarely struggled to keep up with opponents on the Bulldogs’ challenging schedule.

It’s one of the best tightrope walks performed by a local athlete during a 2020-21 athletic year that was so heavily affected by the COVID-19 pandemic.

“It was overwhelming at first,” Mateo said. “But probably halfway through it was, ‘I’ve got these days for wrestling, these days are for baseball,’ and after that it was pretty easy.”

Mateo’s connections to the wrestling world are steeped in the idea of family.

“Kind of forgetting that little accolade,” Kris said after Dan opted not to mention it.

“That was a long time ago,” Dan countered.

That’s how Mateo first became immersed in the wrestling world. He began wrestling himself at age 4.

“I was absolutely drawn to it,” Mateo said. “Just partially because my dad was there doing it and always wanting to be around him, but (also) just the atmosphere really dragged me into it and caught my attention right away.”

Mateo said he was “a pretty average wrestler” early on. His only other sport at that time was baseball.

That changed in fifth grade. He turned to basketball over wrestling while now living in Pontiac.

“Basketball was something new to try,” Mateo said. “You look at it now like, ‘Why?’ But it was just another experience I had now that I can say that I did.”

Dan and Kris fully supported whatever athletic ventures their son wanted to plunge into.

“The reason we’ve never limited him ... is that, at an early age, how do you determine what they’re going to be good at?” Kris said. “We never wanted our successes in our life to influence our kids.”

Mateo, however, wasn’t getting away from wrestling that easily.

Dan was Prairie Central High’s principal while Mateo attended school in Pontiac, and Dan would assist in the organization and operation of youth wrestling tournaments at his school.

“I remember, it was the night before one of the tournaments, (Mateo) hadn’t wrestled in a couple years and he was like, ‘I want to wrestle tomorrow,’” Dan said. “So I went online, got him a USA (membership) card and got him signed up for the tournament the next day.”

Mateo was spurred back into wrestling full-time as a seventh-grader when Pontiac began running a junior high program.

“His coach allowed him to play basketball and come out for the end of the wrestling season,” Kris said.

“It was about a week before the (IESA) regional he went out for wrestling,” Dan added.

Mateo couldn’t ignore his innate passion for the sport any longer.

For Mateo, though, wrestling appealed to him in a different way.

“The wrestling team, in my opinion, we’re just a big family,” Mateo said. “We’re always there for each other. We always have each other’s back, and we just pick each other up and we always support each other.”

“He’s got to have a connection,” Kris added. “Our family’s a farming family, so we were constantly together. My husband’s family is a very large family. The family aspect (of wrestling) for Mateo, I think, was just a natural transition from what he grew up in and what he’s always known.”

Another aspect of Mateo’s life seemingly makes him a good fit for wrestling: size.

“He was born at almost 11 pounds,” Kris said of her eldest of three children.

Mateo did need time to grow into his body and develop athleticism, something he feels actually is one of his strengths now as a wrestler.

“One of the things about Mateo is that I think he’s learned from his challenges,” Dan said. “In wrestling, he took a lot of thumps and he learned.”

Some of those thumps came from a credible local wrestling source.

When Mateo returned to the mat in seventh grade, he started working out at Doug Hoselton’s facility called The Compound.

“They were gracious to him,” Kris began, “but they were also …”

“Enjoyed putting the thumping on him,” Dan finished. “He’s learned that you learn oftentimes more from your losses and adversity than you do from things that come easy.”

Mateo didn’t wait long to see positive outcomes upon his resumption of wrestling. He qualified for state in seventh grade and won a state championship in eighth grade with Pontiac.

And he was about to start high school, having grown up watching the pageantry and the action of the state finals at State Farm Center in Champaign.

“It was just nice to see not that I was equal, in a sense,” he said, “but I won a state championship, too.”

Another family relocation preceded Mateo’s high school debut. With the Casillas’ arrival in Mahomet, Mateo wasn’t 100 percent sure if he would wrestle or play basketball when the fall of 2019 rolled around.

“The second or third day (at M-S), he came out and some of the bigger boys came out. And I said to him, ‘You aren’t the biggest out here, are you?’” Kris said. ‘He said, ‘No, Mom, I’m average.’ ... The transition was kind of nervous in eighth grade to move, and he wasn’t sure where he was going to fit.”

After Mateo played organized football for the first time earlier in the school year, he represented the Bulldogs in the regular season and postseason at 195. He placed second in a Class 2A regional and wound up one win short of qualifying for the state meet as a freshman.

“I had a very good season,” Mateo said of his freshman year. “Probably lost some matches that I might not have (now), but also won some that people were thinking I wasn’t going to win.”

Mateo said he’s close with senior 220-pounder Daniel Renshaw — a fellow All-Area first-teamer and a fifth-place finisher at this year’s IWCOA 2A state meet — as well as sophomore 182-pounder Brennan Houser and sophomore 220-pounder Colton Crowley. They all make for easy practice partners.

“When he’s wrestling with Daniel Renshaw every day in practice and Brennan Houser and Colton Crowley that are all state qualifiers,” Dan said, “that’s an advantage that certainly a lot of kids didn’t have this year.”

Dan also pointed to a “goal sheet” that Ledin has his athletes fill out when they enter the program, offering a timeline of progress over the course of four seasons.

Not maybe, it turns out. Definitely.

It might’ve been hard for Mateo to envision that future, however, when the pandemic began last year. He’d earned a spot in the IWCOA’s 2020 frosh-soph tournament that eventually was canceled in response to the pandemic.

“I would wake up, obviously not go to school, do school on a Chromebook, but after school I would just ... wonder, ‘What do I do now?’” Mateo said. “I’ve been used to going to practices and then coming home and doing homework, and there was just none of that.”

What Mateo did was enter “Camp Casillas,” as Kris called it.

The Casillas family lives out in the country on a fairly spacious property surrounded by cornfields. Mateo took advantage of this setting while unable to work out at M-S.

“He hit the weights really hard,” Dan added. “We were fortunate to be able to put some weights in the basement, because you couldn’t go anywhere, and he was down there every day because there was not much going on.”

All of Mateo’s hard work nearly went for naught when he suffered a dislocated knee cap last December during a non-IHSA wrestling tournament.

He received backing from his home and school families and sped through his rehabilitation process in order to play in a few of the Bulldogs’ six football games during their shortened 2021 spring season.

Mateo did use this health-based setback to benefit himself in another way.

“We also had to have some really deep heart-to-hearts,” Kris said, “just in the fact that athletics doesn’t define who he is either. Now, granted, he does very well at them, but a lot of people go through (injuries).”

Mateo was really good on the mat this spring.

He wasn’t too shabby on the baseball diamond, either, hitting .365 with three home runs, 17 RBI, 18 runs scored and 13 walks for a Class 3A regional-champion team.

Dan and Kris were prepared to keep Mateo focused on his dual commitments.

“I’d come home and my parents would be like, ‘Do you have this ready for tomorrow? What sport are you doing tomorrow?’” Mateo said. “Just always reminding me. Obviously, it gets annoying sometimes, but they’re just always there trying to help you.”

Mateo ultimately was the only one who could help himself once the referee’s whistle blew on the mat.

That was good enough to secure a victory 27 times out of a possible 28.

Outside the IWCOA 2A state tournament, Mateo said his most important match was in a sectional final versus Bloomington junior Anthony Curry.

What else did the Casillas family list among desired future results when Mateo first got going within the M-S wrestling program?

“Getting to state as a sophomore certainly was a goal, and then placing as a junior,” Dan said, “and then, if you worked hard enough, being in a position where he could have a chance to win as a senior.”

Considering what happened this year, maybe Mateo won’t need to wait quite that long for such a podium-topping performance.