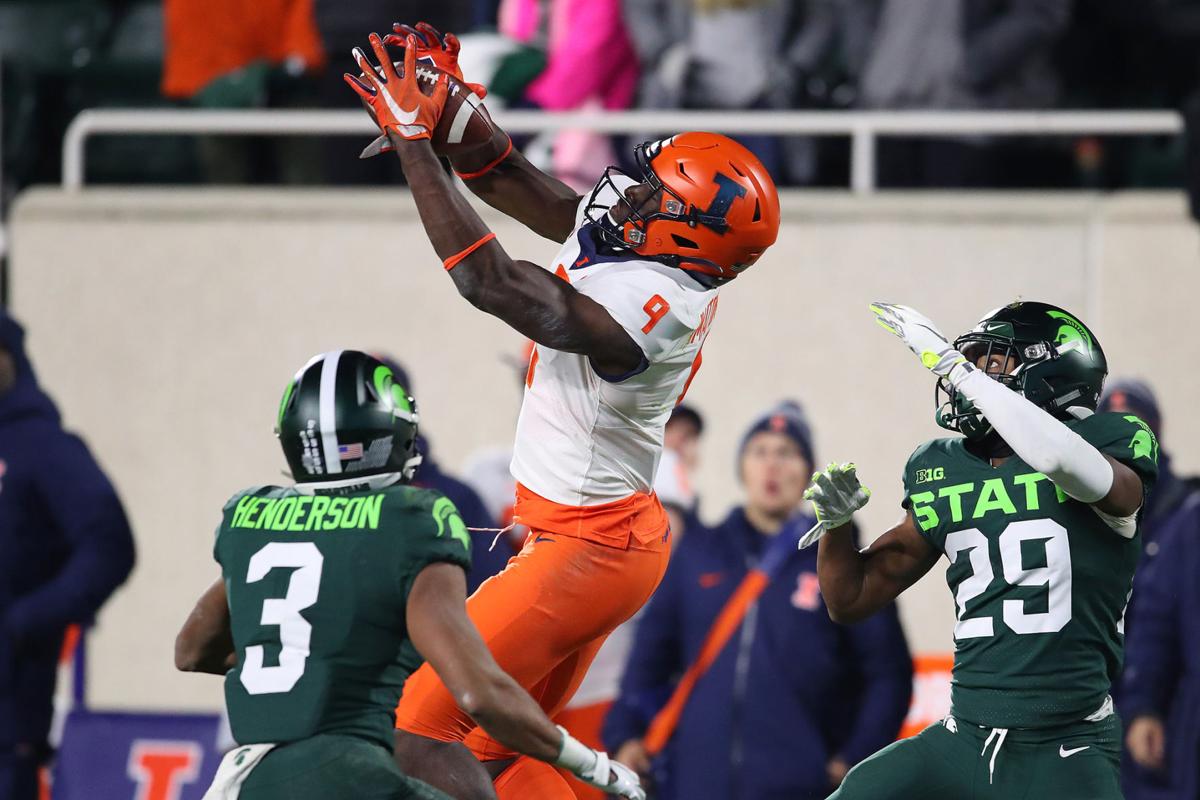 Wide receiver Josh Imatorbhebhe made some clutch catches last season for Illinois, including in the Illini’s comeback win at Michigan State. What will the former Southern Cal transfer do for an encore in 2020? 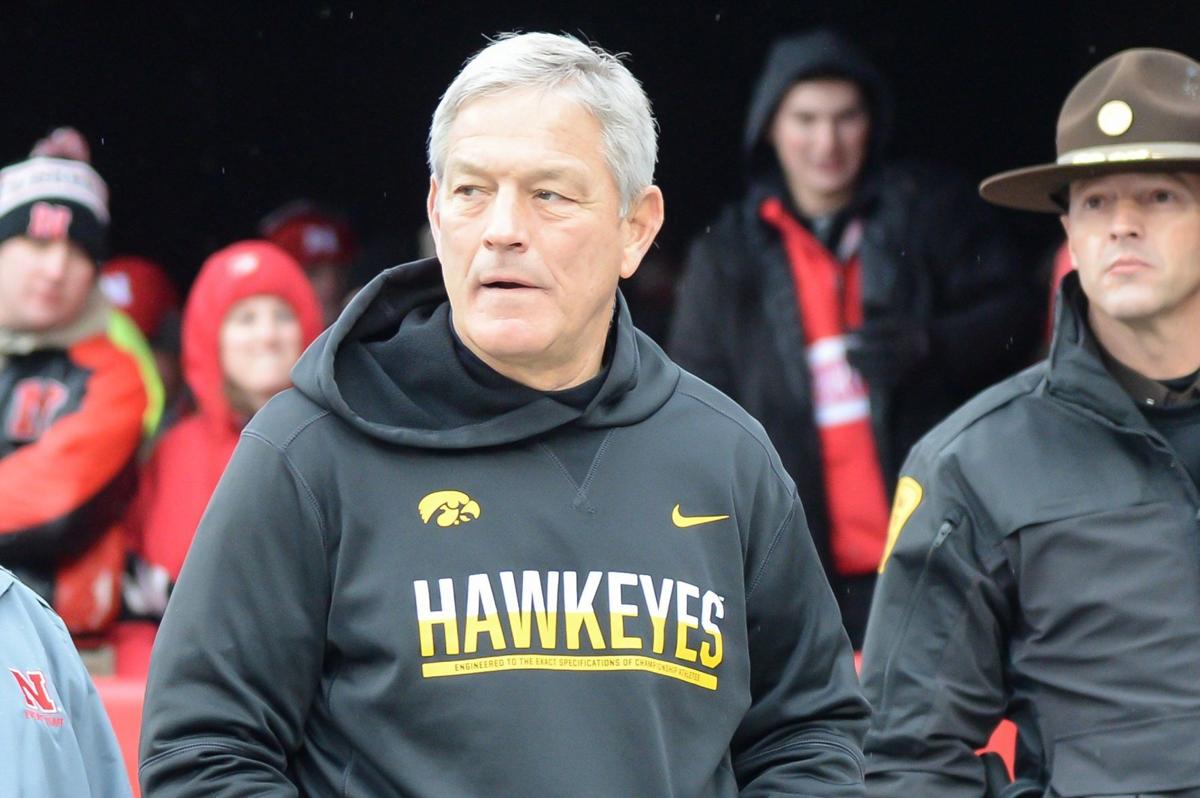 Kirk Ferentz’s 22nd season as Iowa’s head coach has been unlike any other not just in dealing with the COVID-19 pandemic, but due to the controversy surrounding former strength coach Chris Doyle. 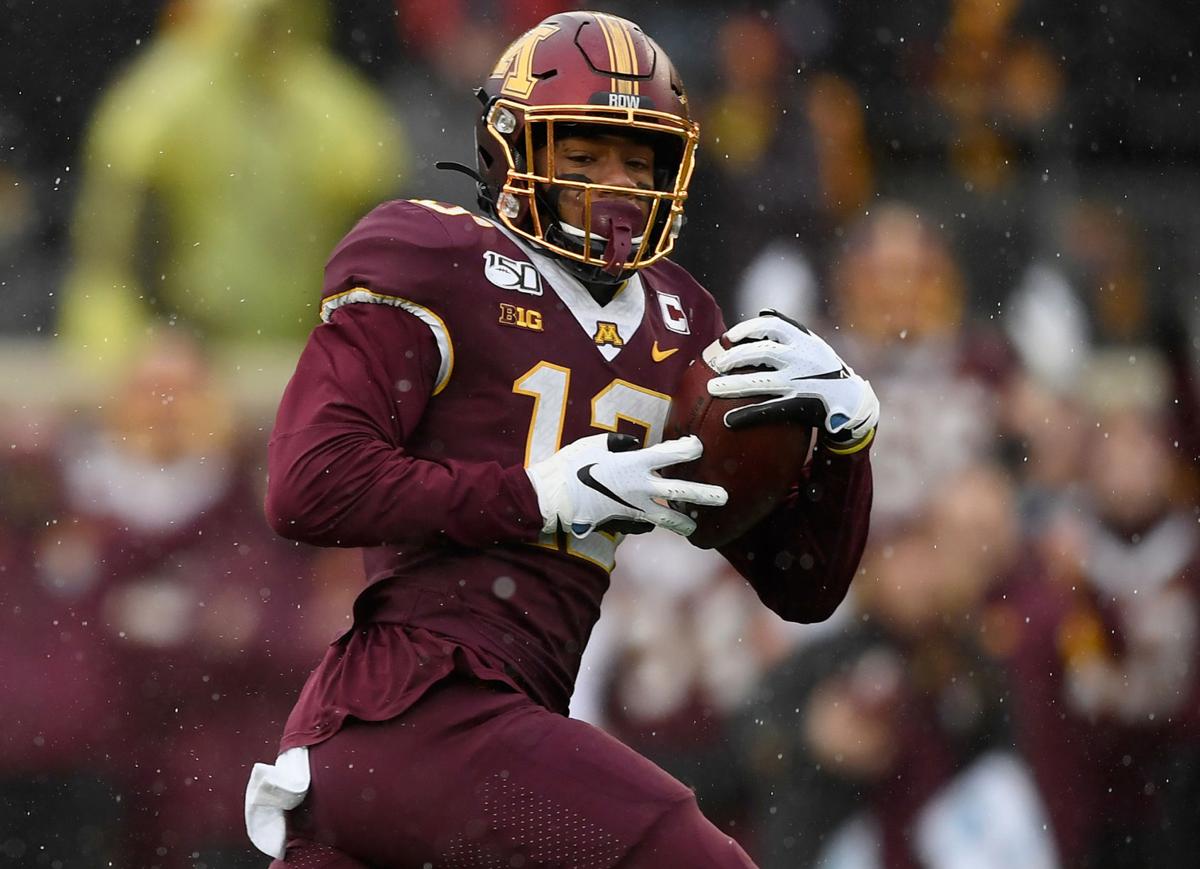 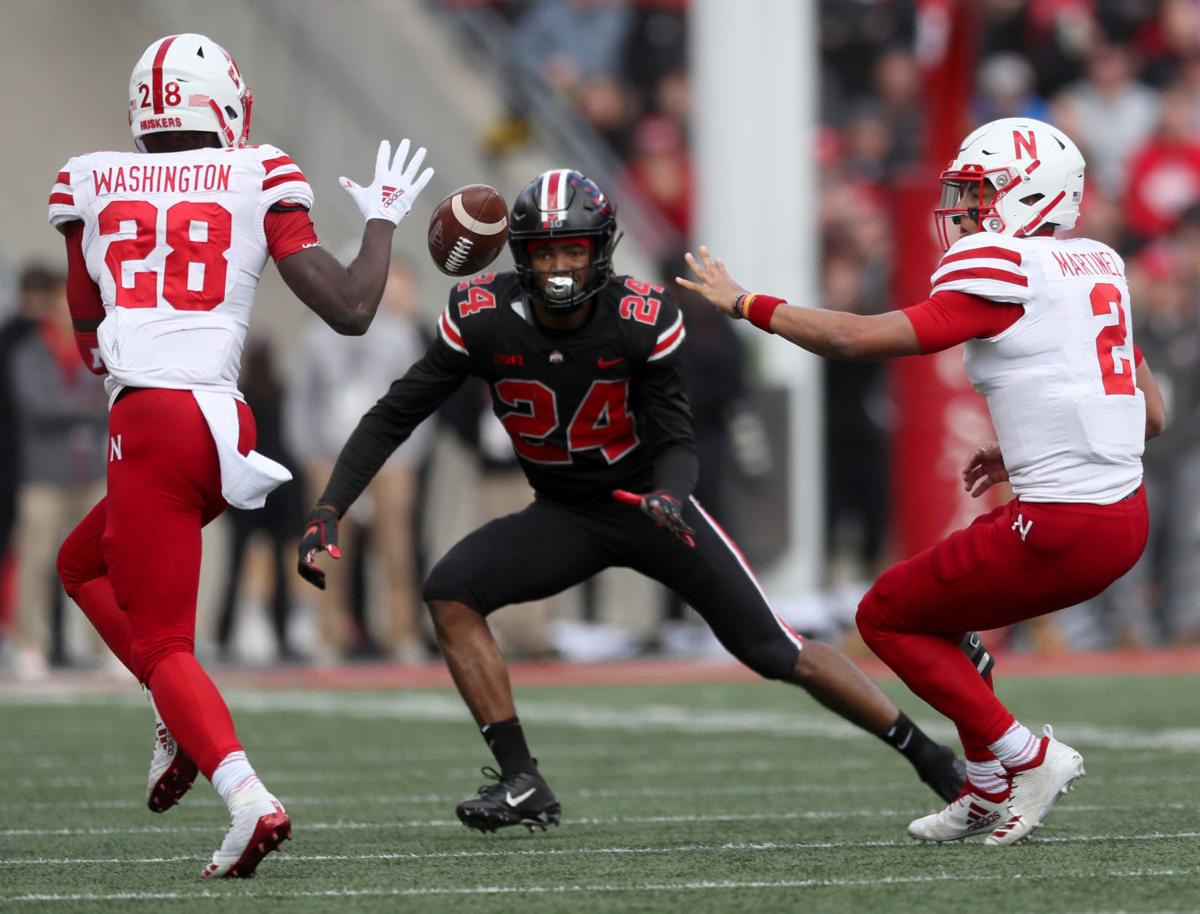 Nebraska quarterback Adrian Martinez, right, will require a bounceback 2020 season after putting up disappointing numbers as a sophomore last season. 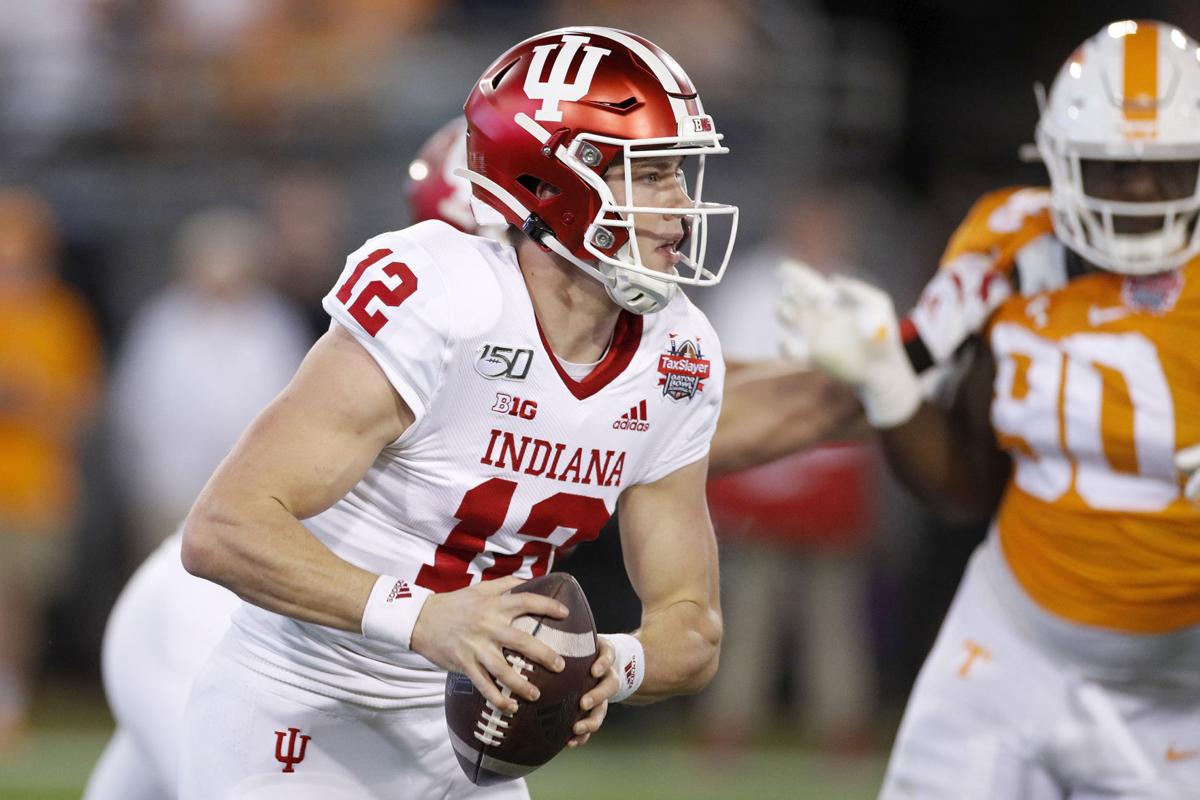 Peyton Ramsey is trading the red and white of Indiana for the purple of Northwestern after the transfer quarterback moved to Evanston in the offseason. 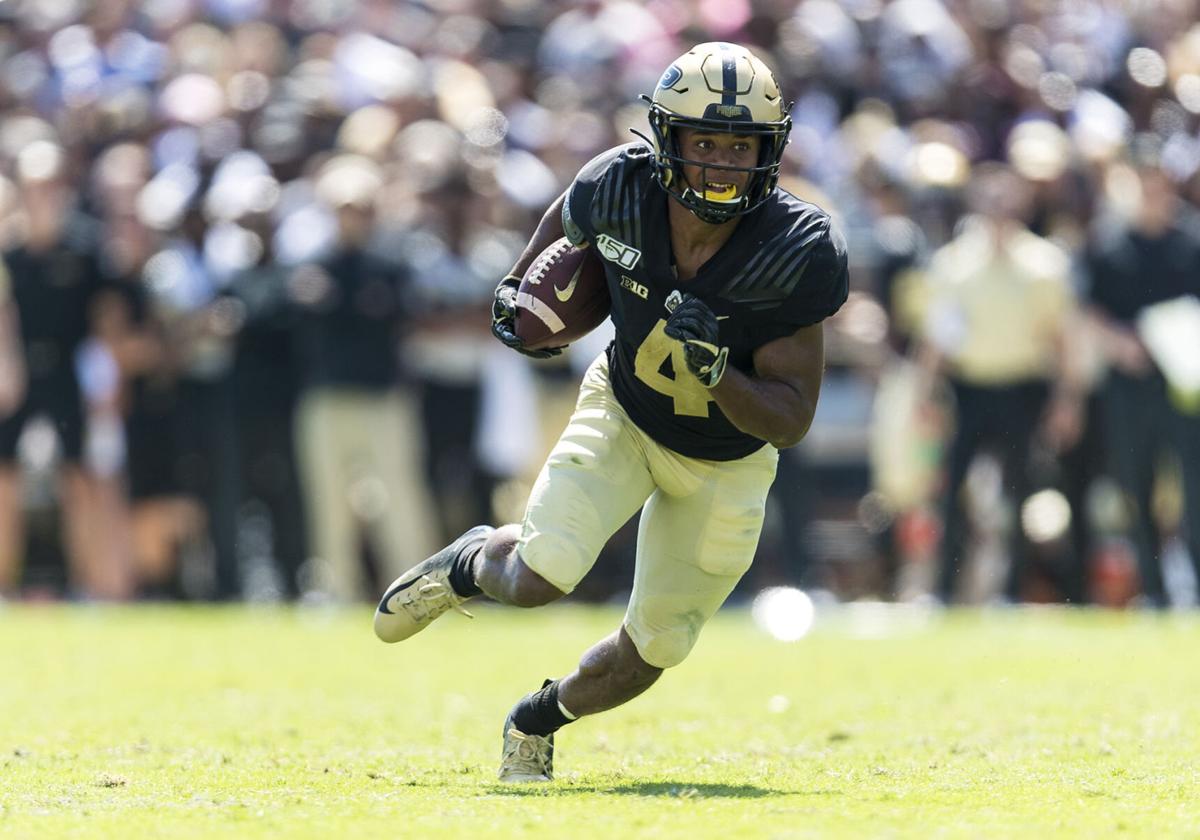 Purdue wide receiver Rondale Moore was slowed by injuries in 2019 and will be a key piece for the Boilermakers to turn things around this fall. 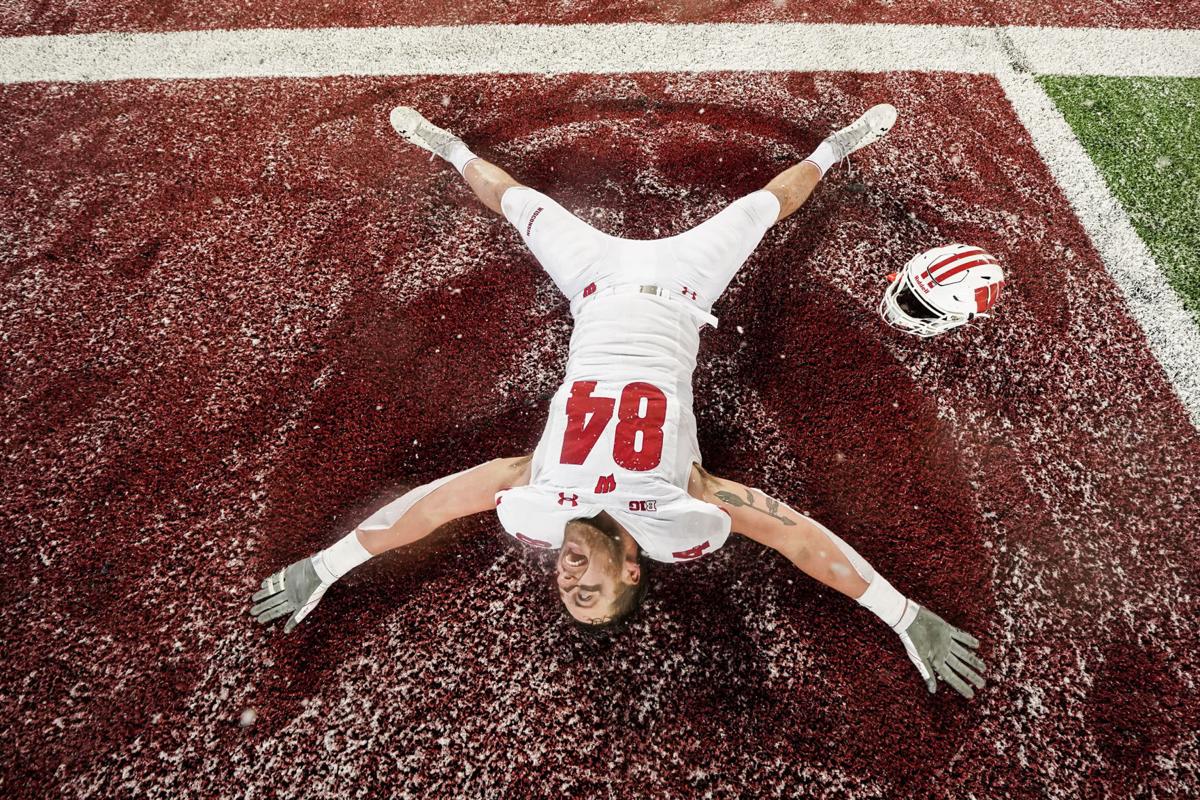 Wisconsin tight end Jake Ferguson may be seen doing more celebratory snow angels if the Badgers beat rival Minnesota in 2020, like they did in 2019.

Outlook: This is the opportunity the program has been pointing to for years. Coming off its first bowl bid of the Lovie Smith era, Illinois is trying to build on a season that included a win against No. 6 Wisconsin and a comeback for the ages at Michigan State. A veteran offense is led by returning quarterback Brandon Peters.

Coaching them up: Lovie Smith is 15-34 entering his fifth season at Illinois. Some wondered if he could make the transition to college after two decades in the NFL. The early go was rough, but the home victory against Wisconsin and the ensuing celebration seemed to change the trajectory. Smith’s steady hand helped the team through a difficult and confusing offseason.

Reason to cheer: The schedule is favorable, with another game against Rutgers and only one against an East toughie (Ohio State). Opening at Wisconsin isn’t easy, but it’s a lot better without fans in the stands at Camp Randall. The return of four-fifths of the starting offensive line is a plus. So is a second year with wide receiver Josh Imatorbhebhe.

Reason to jeer: After a bowl appearance, fans are expecting more, which will be a challenge in a nine-game Big Ten-only season. There are depth issues on the offensive line, and the defensive line has been rebuilt. Plus Peters, not exactly known for his running ability, is the team’s leading returning rusher.

Outlook: Hawkeyes took severe hits due to graduation and early departures. News-Gazette All-State selection A.J. Epenesa and offensive lineman Tristan Wirfs left early for the NFL and quarterback Nate Stanley is finally out of eligibility. The team had to deal with the offseason controversy surrounding strength coach Chris Doyle, who was forced out.

Coaching them up: Kirk Ferentz is 162-104 ahead of his 22nd season at Iowa. At 65, the dean of Big Ten coaches is also the oldest boss in the conference. Before the off-the-field troubles, Ferentz’s tenure appeared to be as secure as any in the country. Now, folks are watching to see if the program will remain stable.

Reason to cheer: If new quarterback Spencer Petras is the real deal and the Hawkeyes are able to rack up points in bunches. Though Iowa lost two starters on the offensive line, star Alaric Jackson is back. And so are the top receivers and running back. Oh yeah, kicker Keith Duncan is one of the best in the nation. The early schedule is favorable, with winnable games against Purdue, Northwestern and Michigan State to open the season.

Reason to jeer: The defense is missing six starters, including three on the line. After winning at least eight games every year since 2015, the Hawkeyes might be due for a clunker. While Petras has the size and arm strength to be the long-term answer, there are no guarantees. The team seems to have put a lot of eggs in his basket.

Outlook: The Gophers are coming off a surprising 11-win season, the most at the school in more than 100 years. P.J. Fleck and all of his rah-rah “Row The Boat” stuff seems to have caught on well in the Twin Cities. The program is drawing attention away from the popular pro teams in the community. Beating two top-10 teams earned the Gophers a new level of respect.

Coaching them up: Fleck is 23-15 in his fourth year at Minnesota. The former News-Gazette All-Stater from Kaneland turned a magical season at Western Michigan into a Big Ten gig. He has built the program with aggressive recruiting and an emphasis on high-volume classes.

Reason to cheer: If quarterback Tanner Morgan puts himself in the Heisman race by repeating — or bettering — his monster 2019 season. Receiver Rashod Bateman shows his gratitude for a second chance from the NCAA by leading the nation in yards, catches and touchdowns. The loaded offensive line, which returns all five starters, creates huge holes for the backs and keeps defenders away from Morgan.

Reason to jeer: The defense, which took a hit with the loss of Antoine Winfield Jr. and Carter Coughlin, isn’t able to measure up. The home opener against Michigan goes the Wolverines’ way and the Gophers aren’t able to recover. This is the first time Fleck will be coaching a team with great expectations. How does he handle the pressure? And how do the Gophers deal with it?

Outlook: No school this side of Ohio State wanted to play more this season. The place with five national titles has missed out on bowl games three years in a row. Last time that happened in Lincoln was from 1959-61. Businesses in Nebraska are still going to suffer without the gameday traffic, but to not play at all would have devastated the locals.

Coaching them up: Scott Frost is 9-15 in his third year at Nebraska. After the great work he did at Central Florida, bringing Frost back to Lincoln was a no-brainer. Fans still remember him leading the school to the national title in 1997 and want to a return to the glory days.

Reason to jeer: The Big Ten socked the Cornhuskers with the revamped schedule, sending them to Ohio State for the opener. That’s followed by games against Wisconsin, Northwestern and Penn State, meaning the team could easily open the season 1-3. The defense got hit hard by graduation and early departures. Both specialists will be new, and the kicking game struggled in 2019.

Outlook: Most everyone expects a bounceback in Evanston after a rare rough season for Pat Fitzgerald. The 3-9 finish last year was the worst at the school since 2002. The team missed the postseason for the first time since 2014. It did end the season on a happy note by humbling Illinois on its Senior Day.

Coaching them up: Fitzgerald is 99-79 in his 15th season at Northwestern. A former All-American linebacker for the Wildcats, Fitzgerald has done in Evanston what many considered impossible. There is no hot seat for Fitzgerald, who basically has a lifetime contract at his alma mater.

Reason to cheer: New offensive coordinator Mike Bajakian, hired away from Boston College, is just the spark the team needs. Former Indiana quarterback Peyton Ramsey clicks with the new system. Linebackers Blake Gallagher and Paddy Fisher tackle everybody. The schedule is friendly, with crossover games against Maryland and Michigan State.

Reason to jeer: Perhaps last year wasn’t a fluke — it was the start of a trend. While having a new offensive coordinator is all good, we have learned that even the best coach can’t get it done unless he has talent on hand. The continuity on the staff had been important to Fitzgerald’s success. Making changes doesn’t always work.

Outlook: For a second there, the folks in West Lafayette were bummed out. Superstar receiver Rondale Moore opted out to get ready for the NFL. Until he didn’t. Now that he is back on the roster, he joins David Bell to form one of the best receiver combos in the conference. The key will be who gets them the ball. Quarterback Jack Plummer is returning from an ankle injury suffered late last season.

Coaching them up: Jeff Brohm is 17-21 in his fourth season at Purdue. The former Illinois assistant reached bowls his first two campaigns before a slip to 4-8 last season. Purdue fans were thrilled when Brohm stayed in West Lafayette instead of returning to his alma mater, Louisville. An injury-induced dip hasn’t changed the positive feelings about the program.

Reason to cheer: Moore avoids the injury bug and — with Bell drawing plenty of attention — puts together another All-American-caliber season. Cool-named tailback King Doerue doubles his production and goes over 1,000 yards, making the Boilermakers more dangerous. Sophomore defensive end George Karlaftis continues to shine, topping his 7 1/2 sacks from the 2019 season.

Reason to jeer: The offensive line, which has been a work in progress during Brohm’s tenure, isn’t able to protect whoever plays quarterback. The first half of the schedule, with games against West favorites Wisconsin and Minnesota, puts the Boilermakers in a deep hole. And worse, Brohm won’t coach the opener against Iowa on Saturday because he tested positive for COVID-19.

Outlook: While Minnesota is receiving a lot of buzz, the defending West champs remain the team to beat. Paul Chryst has major work to do on offense, replacing superstar tailback Jonathan Taylor and three offensive line starters. Of course, they grow blockers on trees in Wisconsin.

Coaching them up: Chryst is 52-16 in his sixth year coaching the Badgers. The mild-mannered former Wisconsin quarterback realizes not to change a good thing. So count on him continuing to run the ball until the opponents prove they can stop them. Chryst has won at least 10 games in four of his first five seasons. Turns out he was a great hire.

Reason to cheer: Highly-touted Graham Mertz steps in for injured Jack Coan and is better than advertised. Even before Coan got banged up in practice, Mertz figured to get a long look. He’s got help at the skill positions, starting with tight end Jake Ferguson. The team gets revenge in the opener against Illinois in the opener, continuing a home streak that goes back to 2002.

Reason to jeer: If the Badgers are anything less than 3-0 going into the Nov. 14 date at Michigan. Wisconsin opens with Illinois, Nebraska and Purdue and figures to be favored in all three. The back of the schedule is much more of a challenge, with Wisconsin closing against Minnesota, Indiana and Iowa. If Mertz is more of an urban legend than the real deal, that might not make the folks in Madison very happy.