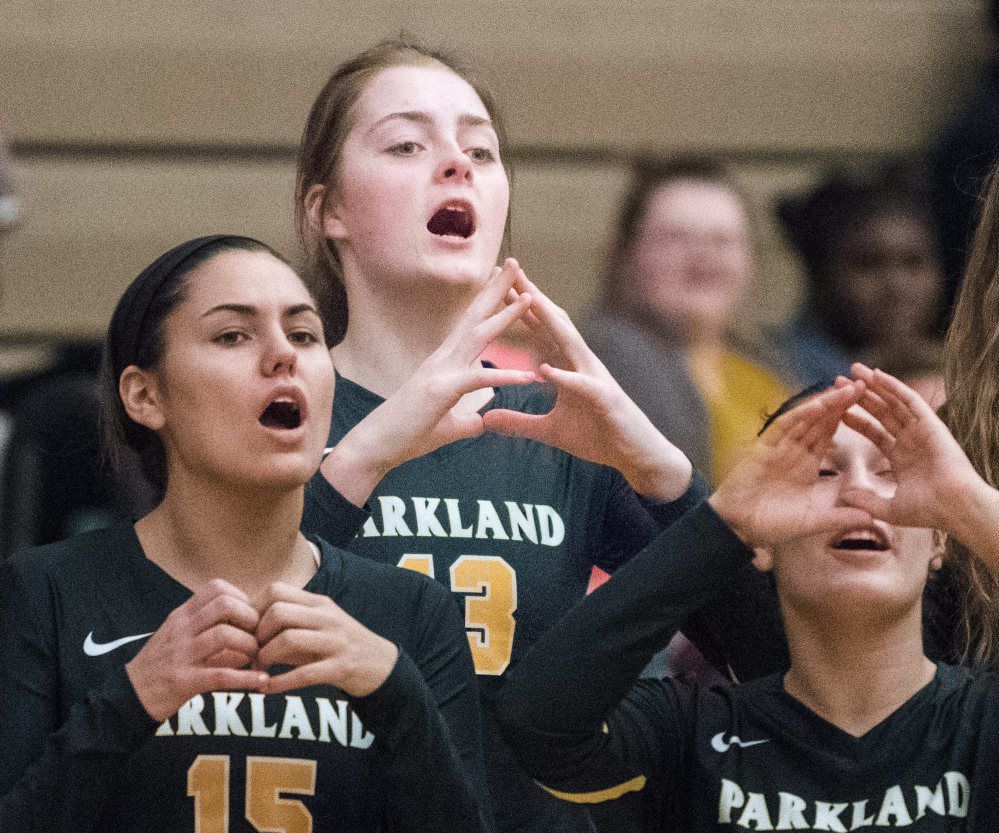 Parkland volleyball player Raeanne Allen (13) cheers along with her teammates Friday, Oct. 11, 2019, at the Mid-West Athletic Conference Tournament at Parkland College in Champaign. 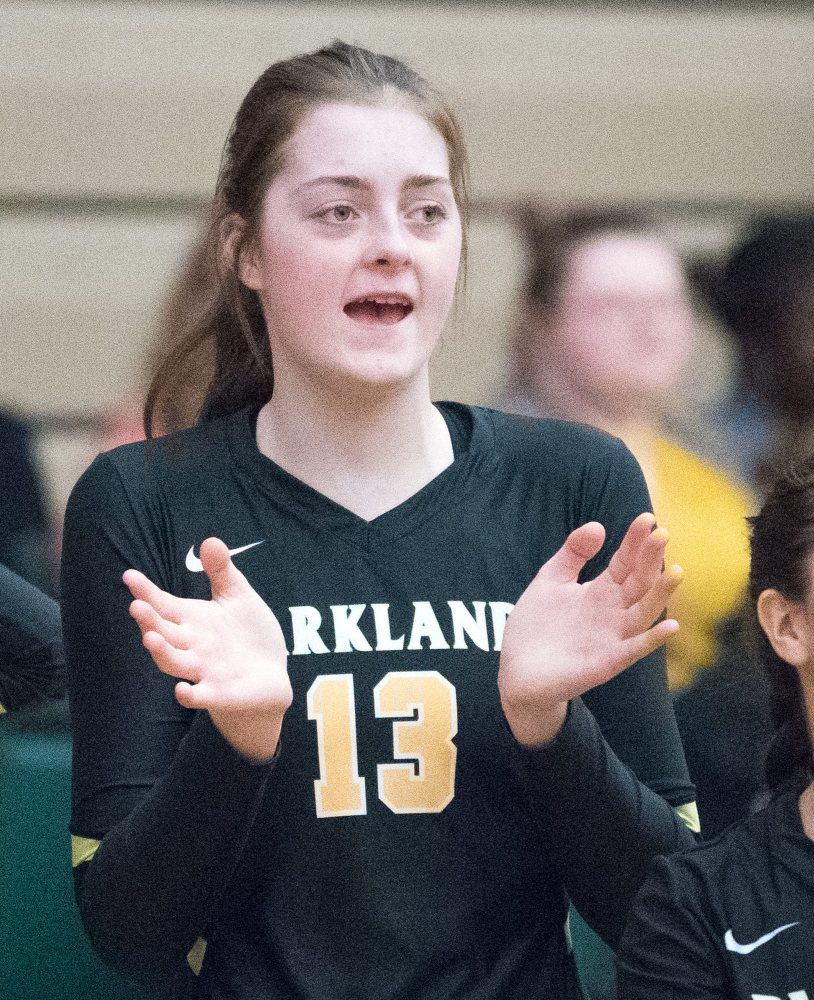 Parkland volleyball player Raeanne Allen (13) cheers along with her teammates Friday, Oct. 11, 2019, at the Mid-West Athletic Conference Tournament at Parkland College in Champaign.

CHAMPAIGN — Raeanne Allen stands out among her Parkland volleyball teammates, and that isn’t only because of her 6-foot-3 height or impressive athleticism.

After each big point, the freshman celebrates with exuberance and excitement unmatched by her peers, even in a sport in which loud celebrations after each point are common.

“She will just throw her arms onto the ground like she’s having the best time of her life,” said assistant coach Zachary Bush, who coached Allen on the club level. “And she’s probably the most excited kid on our bench as well.”

Allen simply doesn’t have a filter, her teammates and coaches say. The DeLand-Weldon grad wears her emotions on her sleeve.

And she isn’t afraid to challenge two-time national champion coach Cliff Hastings in a matter-of-fact way.

In the lead-up to the season, Hastings wasn’t sure how Allen would adjust to college life and volleyball. Allen has autism, which covers a wide variety of conditions. So Hastings and his staff set out a plan to resist overstimulating her.

If anything, they overplanned, Bush said. The transition has been smooth overall during a season in which Allen is second on the team with 1.20 blocks per set for the top-ranked team in NJCAA Division II.

Of course, there have been challenges. Hastings is trying to help Allen see a complicated game in a non-binary way. Black-and-white thinking is a common trait among people with autism.

Hastings, though, has welcomed the challenge of adapting his coaching style to the way his talented right-side hitter thinks.

“Her job is to take the outside hitter and block the ball inside the court,” Hastings said. “The outside hitter may run a different route and go somewhere else. But she’s out here by the antenna thinking, ‘This is what’s going to happen, and I do this. Then something totally different happens, but I’m not totally processing the difference and how to transition in the middle of the game.’

“She’s getting better. She’s not ready at that level yet. But I think next year, when we’re able to break all of these things down into 30 binary statements, I’m interested to see how that goes.”

This wasn’t a route Allen ever envisioned she would go.

And Hastings didn’t, either, until he saw a once-timid player turn into a confident one her senior year of high school. During a conversation with Allen and her mother, Hastings found out that Allen was planning to go to Parkland, which prompted him to offer her a spot on the team.

Socially, the transition has gone swimmingly. Whether it’s her love of ’90s pop music, dancing, food or her goofy personality in general, her teammates enjoy her presence, and she has fit right in.

“You never know what she’s about to do, so every day has been interesting with her,” said freshman Summerlyn Smith, who played club volleyball with Allen in high school. “I would never trade her for the world. She’s always a good time to be around, and she’s very happy and smiley.”

Allen doesn’t blend into the group on the court, of course. Six-foot-3, left-handed right-side hitters rarely do, especially ones as exuberant as her.

But that unfiltered personality rubbed off on the rest of the team as they prepared to host today’s NJCAA DII Volleyball Central A District Championship semifinal. And that is a very good thing.

“You can see her turn it up one more notch because I guess she doesn’t have that filter, so she goes off and goes crazy with no thought and no worry about what’s happening around her,” Bush said. “She’s just perfectly excited. It just gets everybody else (excited) because we’re all around her.

“I think she encourages girls to just let loose and not be concerned about outside factors and enjoy the moment.”