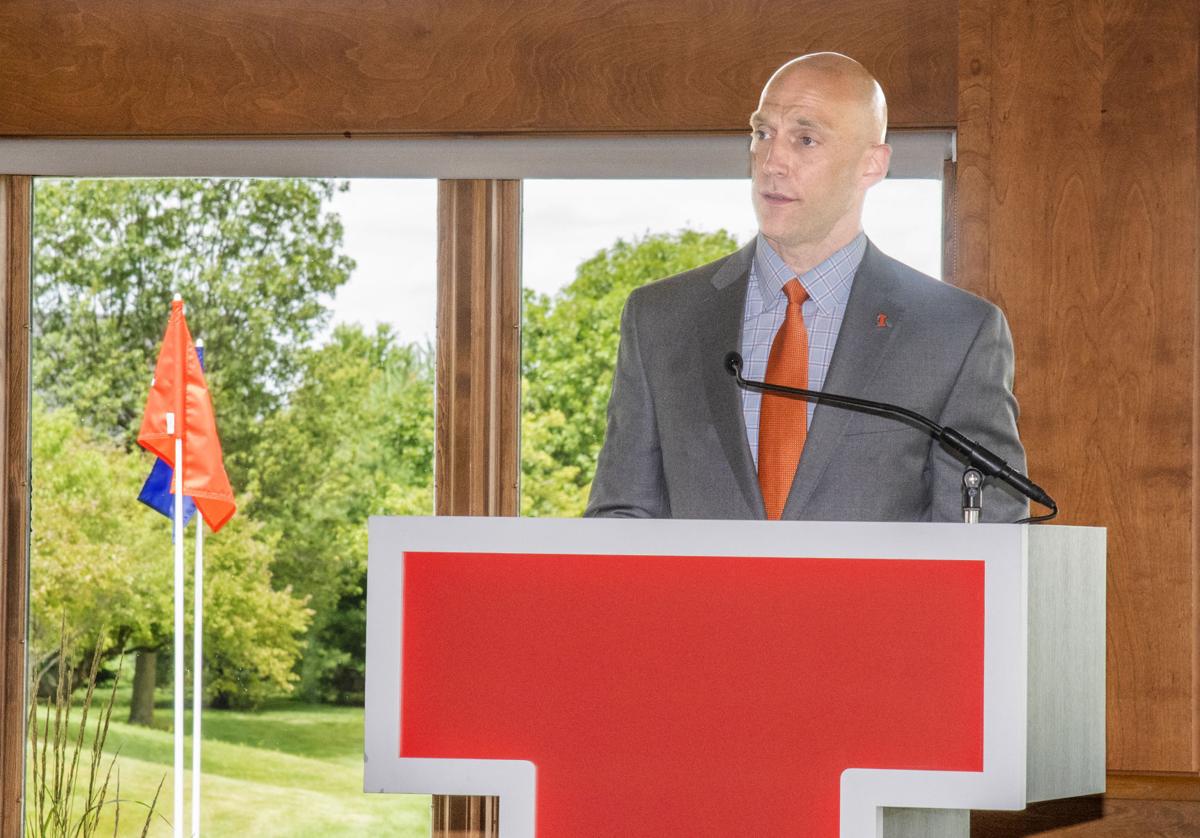 Illinois athletic director Josh Whitman speaks at Tuesday afternoon’s press conference in Urbana announcing The Atkins Group is giving over control of Stone Creek Golf Club to the University of Illinois. ‘It’s exciting for us that this gift will benefit our entire community,’ UI Chancellor Robert Jones said at Tuesday’s press event. 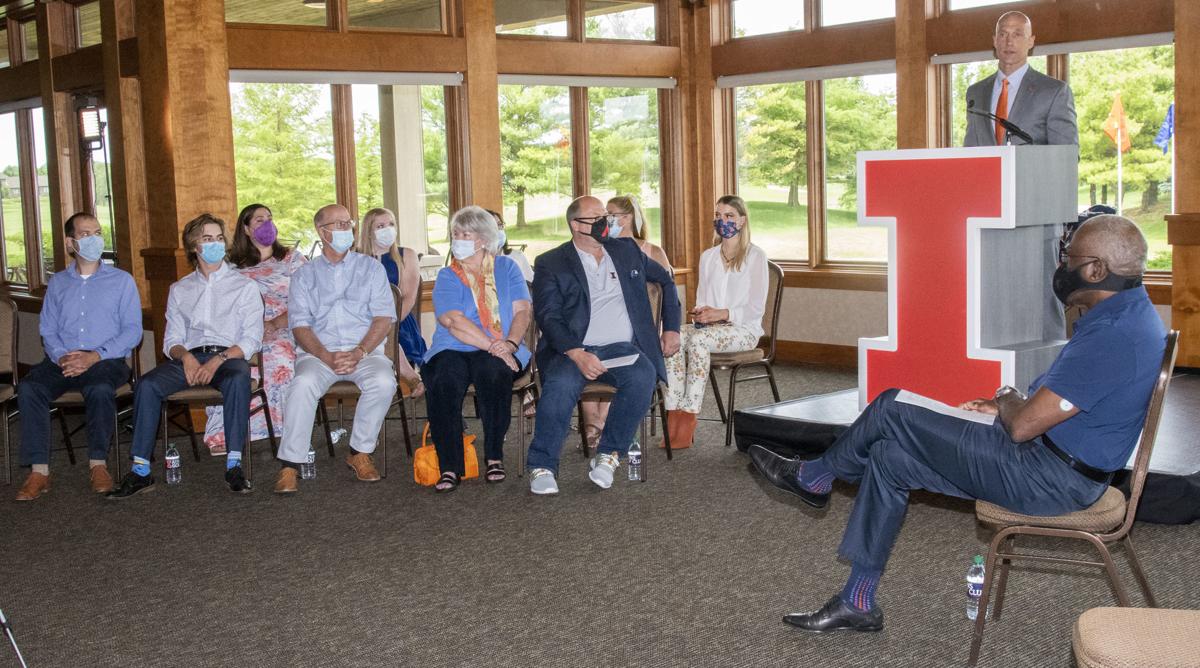 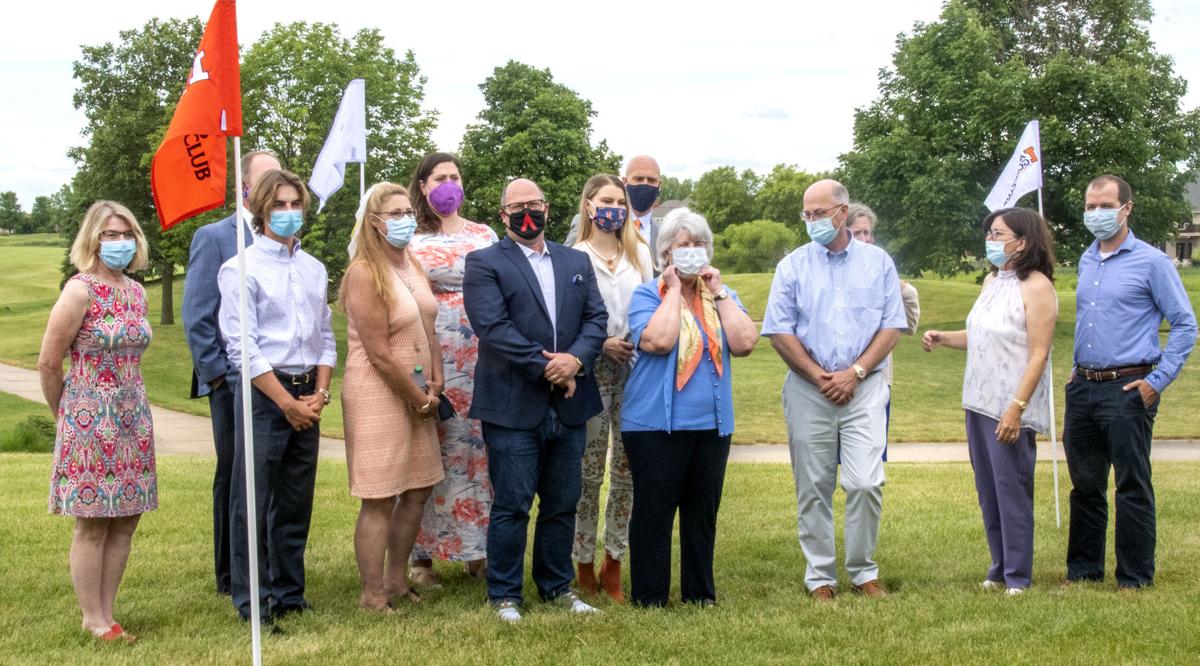 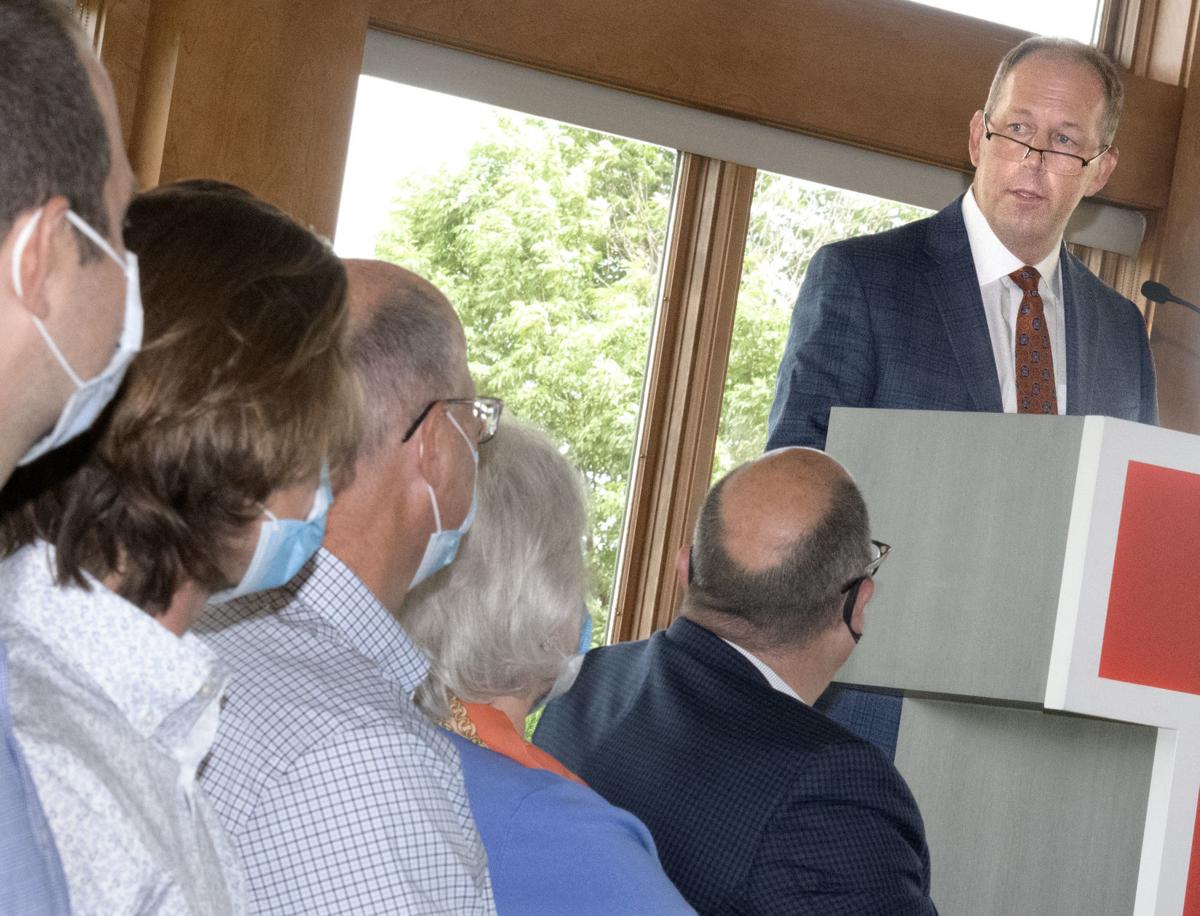 Illinois athletic director Josh Whitman speaks at Tuesday afternoon’s press conference in Urbana announcing The Atkins Group is giving over control of Stone Creek Golf Club to the University of Illinois. ‘It’s exciting for us that this gift will benefit our entire community,’ UI Chancellor Robert Jones said at Tuesday’s press event.

Declining interest in the sport of golf, rising operating costs and the necessity of capital improvements made moving forward with business as usual untenable.

The Atkins Group’s initial plan for Stone Creek Golf Club was to turn the entirety of the acreage into green space. Not quite two months later the University of Illinois entered the picture.

The coronavirus pandemic slowed the initial round of talks in March and April, but the Illinois Division of Intercollegiate Athletics announced on Tuesday that The Atkins Group would donate more than 300 acres of real estate in southeast Urbana with Stone Creek Golf Club the centerpiece to the university.

Illinois athletic director Josh Whitman called the donation — valued at more than $15 million — one of the most “unique, diverse, impactful gifts” not just for the DIA but for the university as a whole.

“We’re really thrilled to have the opportunity to provide some stability and some enthusiasm around this part of Urbana,” Whitman said. “This continues our commitment to providing championship-caliber facilities to all of our student-athletes. We knew we’ve needed a long-term golf solution. We needed a place for them to call home.”

Pending board of trustees approval, Stone Creek Golf Club will be renamed The Atkins Golf Club at the University of Illinois. It will give Illinois golf two homes, as it were, along with the practice facilities closer to campus off St. Mary’s Road.

“Illinois golf has always been very lucky with a lot of financial and emotional support given to us from families,” Illinois men’s golf coach Mike Small said. “We have a Demirjian Indoor golf facility. We have a Lauritsen/Wohlers outdoor golf facility. Now The Atkins Golf Club. It fits perfectly in that group with a great family supportive of the university.”

The 300 acres includes more than just the golf course. More than 100 residential parcels will remain on the real estate market, with proceeds of sales split among several university divisions. A commercial parcel will be utilized by the Gies College of Business, and the future of nearly 80 acres of undeveloped land remains to be determined by the university.

“We’re excited we’ll have a permanent home for our golf teams, but this gift will also offer support for many other programmatic elements of the university,” Illinois Chancellor Robert Jones said. “It’s a broad-based gift that will continue to have impact for decades to come. It’s also exciting for us that this gift will benefit our entire community.

“It really is going to align and help us achieve a goal we’ve set for the university of really being connected and really leveraging our assets and resources to drive economic vitality. We see this golf course of ours doing all of that outreach and engagement to make Urbana-Champaign an amazing place to live, work and play.”

That The Atkins Group found a way forward beyond turning the property into green space — and the fact the residential real estate remained on the tax rolls with the university taking control — alleviated concerns from the city of Urbana.

“The U of I is obviously the economic engine for our region,” Urbana mayor Diane Marlin said. “When we first started having these conversations with (Spencer Atkins) and with DIA, one of the things we made very clear is we needed most of the land to stay on the tax rolls because of its importance in generating revenue as well as sales tax revenue from the activity out here. They got that, they appreciated it and we worked from there.

“Any time there’s uncertainty, then people start to get worried — both in the city and residents out here. These things evolved. We navigated through that. Once the DIA got interested, that was a turning point. … I think this outcome is really just about the best we could wish for. Really. I think it’s wonderful for the community, wonderful for the university and athletic department and a wonderful gesture from the family.”

Some of Illinois’ plans for its new 300 acres of real estate are still to be determined. The golf course will be closed the rest of 2020 as the first round of improvements are made. Facility needs will also be addressed moving forward, with restaurant space again available and an emphasis also placed on banquet space. Part of Atkins’ vision for currently undeveloped space, which Whitman shared, was for prairie restoration and organic farming.

“We’ll make some of those improvements between now and next spring and then have a multi-tiered plan to make some of the more widespread changes in the coming years,” Whitman said. “The catch phrase we’ve used is ‘space utilization.’ There’s a lot of space under the roofs here in these two buildings.”

The golf course will remain open for public use even after the upgrades to develop it for use of the Illinois men’s and women’s golf teams. That was an important point stressed by Marlin based on the feedback she received from residents and one Whitman was committed to as well.

“Pricing is one of the main variables that we haven’t yet determined,” Whitman said. “I think it’s fair to expect it won’t cost the same as the Orange and Blue Course does. We are striving for a certain quality of play here in this environment. We want to make sure we’re taking care of the course and not putting so much traffic on it that it can’t sustain what we hope to make is a nice investment in its growth and improvement. We’ll be very thoughtful as we work through the pricing structure and what that means for the accessibility of the course to the public.”

The full financial implications of Illinois taking control of what will be Atkins Golf Club are not yet known. Whitman said he would expect it to create more than 30 jobs, with a restaurant on site yielding even more.

“It doesn’t come with a mortgage, which is a good thing for us,” Whitman added. “We’ll be evaluating all that as we move forward. We hope to be able to develop a business model as we settle in. We’re not looking to make millions of dollars off operating a golf course. That’s not the goal, I think, of almost any golf course at this point in time. … We think that we’ve got an opportunity here to push a lot of activity here to southeast Urbana and utilize The Atkins Club as the center point to all of those activities.”

{p class=”card-about”}Scott Richey is a reporter covering college basketball at The News-Gazette. His email is srichey@news-gazette.com, and you can follow him on Twitter (@srrichey).