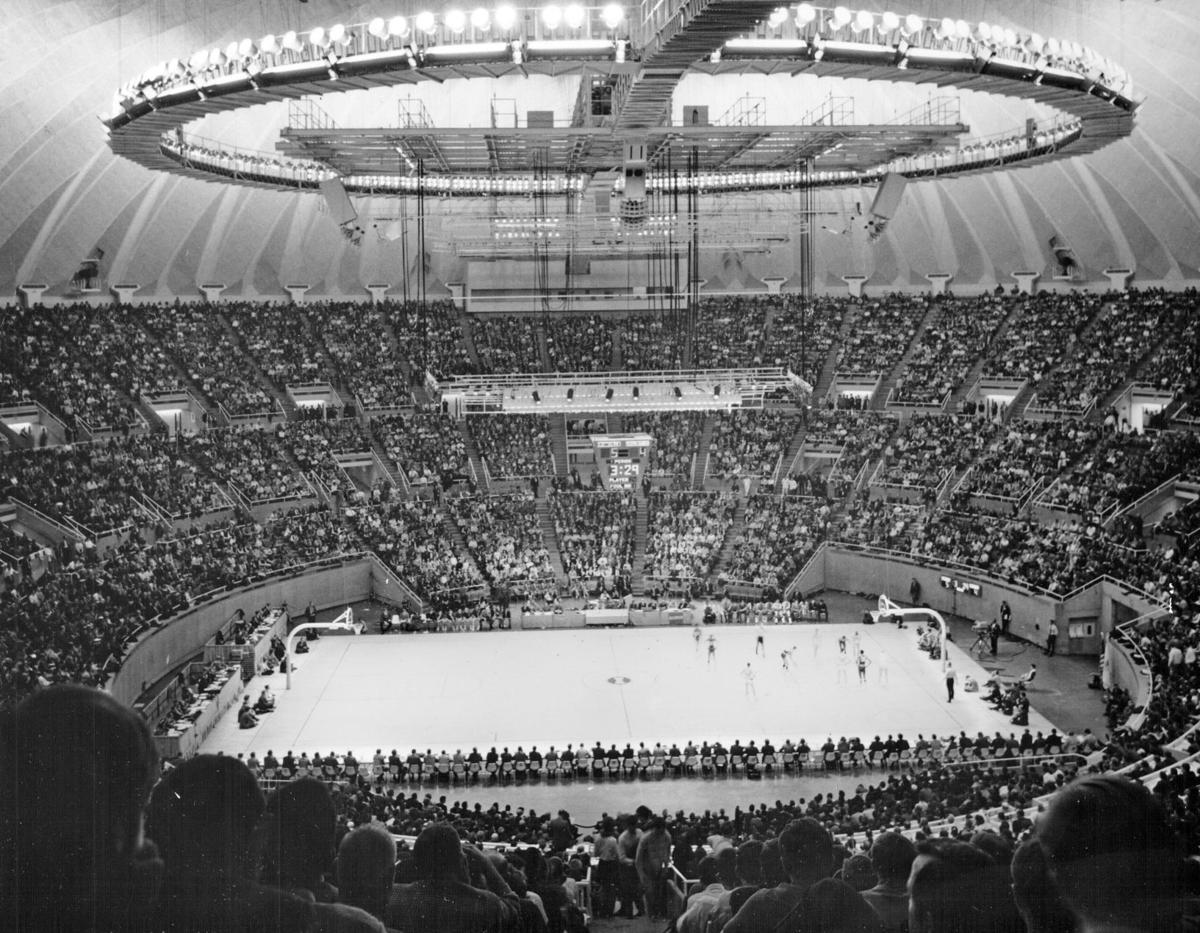 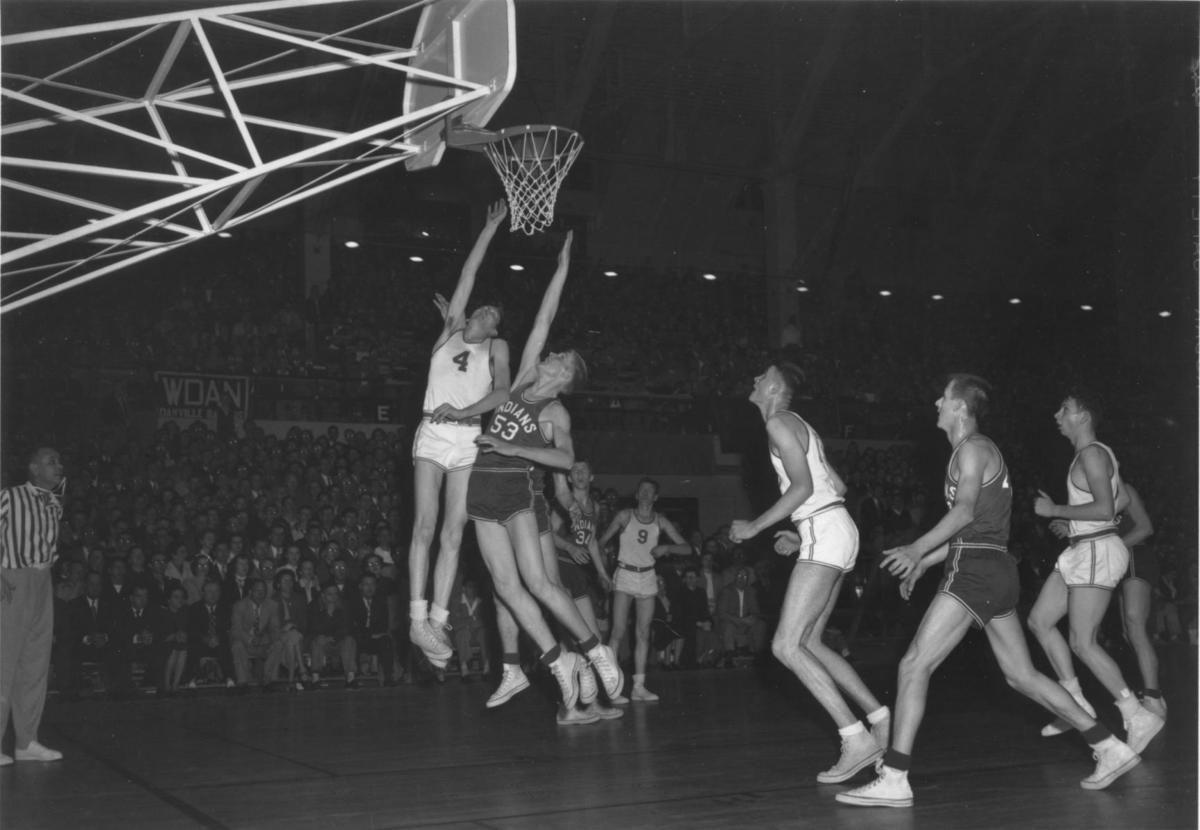 Rockford High School defeated Springfield High School 39-20 on March 15, 1919 at the Men’s Gym Annex in Urbana, led by the duo of Harry Englund (16 points) and Rex Enright (14 points). It was the only boys’ basketball state championship game that calendar year, too.

Until possibly 2021. The IHSA Board of Directors is set to vote Monday morning to determine the site of the next three state tournaments, with Champaign and Peoria the two options. Peoria has hosted the event since 1996 at its downtown venue, Carver Arena. But Champaign is considered a strong favorite to regain the state’s signature high school basketball event.

In 1995, future NBA (and NFL) talent descended upon Champaign. And we’re just talking about the final Class AA quarterfinal game between Thornton and Chicago Farragut, which Thornton ended up winning 46-43. The Wildcats featured future nine-year NBA veteran Melvin Ely, along with eventual NFL wide receivers Antwaan Randle El and Tai Streets. Farragut had the potent 1-2 punch of Kevin Garnett (the fifth pick in the 1995 NBA draft and first high school player who went straight to the pros in 20 years who embarked upon a 21-year NBA career and is set to be inducted into the Naismith Basketball Hall of Fame later this year) and high school legend Ronnie Fields. Also on the Farragut roster: future Arizona Wildcat forward Michael Wright, who Illini fans became well-versed with in the early 2000s.

Kings of the court

Jamie Brandon nearly suited up for Illinois before eventually playing with Shaquille O’Neal at LSU. But before he embarked upon that college journey, the Chicago King guard produced a still-standing IHSA state tournament record of 269 points from 1987 to 1990 with the Jaguars under legendary coach Sonny Cox. He saved his best performances for the final weekend of his high school career, where he averaged 26.7 points, 8.3 rebounds and 2.3 assists in three games at Assembly Hall, leading King to the 1990 Class AA state title. When Brandon was a freshman, he contributed to King’s 1987 state runner-up finish, but the tournament that year belonged to future Flyin’ Illini Marcus Liberty. The athletic 6-foot-8 forward produced a still-standing big-school record of 143 points during his final four games of his senior season, culminating with a double-double of 41 points and 15 rebounds during a 79-62 loss to East St. Louis Lincoln in the state championship game.

Before he became the subject of an award-winning ESPN documentary centered around his tragic murder at the age of 17 in November 1984, Ben Wilson captivated high school basketball fans with his prodigious skills. The 6-foot-8 forward helped carry Chicago Simeon to the 1984 Class AA state championship, playing the final high school games of his life that March. He didn’t overwhelm in Simeon’s 53-47 win against Evanston in the state title game on March 24, 1984, scoring only four points, but the Wolverines wouldn’t have won a championship with his efforts earlier that day. During Simeon’s 67-58 state semifinal win against West Aurora, led by future Flyin’ Illini Kenny Battle, Wilson put on a clinic with 21 points, five assists, four rebounds and three steals. Arguably the top player in the country upon his death, Wilson was considered likely to attend Illinois. His No. 25 jersey at Simeon was worn at Illinois in his honor by former Simeon players like Nick Anderson, Deon Thomas, Calvin Brock and Kendrick Nunn.

The first-ever News-Gazette All-State boys’ basketball Player of the Year in 1983, Marty Simmons pieced together memorable moments in Champaign. The star of Lawrenceville’s undefeated teams in 1982 and 1983 that each finished 34-0 and each hoisted the Class A state championship, Simmons was electric during the six games he played in his high school career at Assembly Hall.

How special was Simmons, who played in college at Indiana and Evansville before he started a lengthy college coaching career? He compiled a double-double in every game, with his most impressive feat happening in the 1983 state quarterfinal game against Chicago St. Providence Mel (which featured future Flyin’ Illini Lowell Hamilton). In the 56-54 win, Simmons produced a whopping 43 points and 17 rebounds. All told, Simmons averaged 25.5 points and 13.8 rebounds during his time at Assembly Hall, lending credibility to his nickname, The Mule, for carrying Lawrenceville to heights the town in southeastern Illinois has not seen since.

Central Illinois cream of the crop

Coach Bruce Boyle’s Lions finished 29-2, topping St. Laurence 69-48 in the semifinals and routing Barrington 67-40 in the quarterfinals and becoming the first downstate school to win a big school state title since Pekin in 1967.

Thornridge asserts it place in history

Quinn Buckner became a household name by starring at Indiana in the mid-1970s, serving as Bob Knight’s captain on the 1975-76 Hoosiers team that finished 32-0 and was the last Division I team to finish a season undefeated.

The 104 points still stands as the most ever in a state championship game, with Boyd Batts (37 points, 15 rebounds), Buckner (28 points, 11 rebounds, seven assists) and Greg Rose (26 points) highlighting the decisive win by Thornridge, which capped its memorable season with a 33-0 record.

The beauty of one-class basketball generated the possibility of a small, rural school trying to topple a big city powerhouse. Especially when said school has a nickname like the Appleknockers. Cobden, a southern Illinois school with 147 students, faced off against Pekin, which had 2,726 students, for the 1964 state championship game at Assembly Hall. The Appleknockers couldn’t land the final punch, falling 50-45 to Pekin in the title game. But coach Dick Ruggles’ team finished 32-3 as stars Kenny Flick and Ken Smith helped Cobden defeat Stephen Decatur 44-38 in the semifinals and Galesburg 60-57 in the quarterfinals.

Before twins Paul and Phil Judson played for Illinois in the mid-1950s, they had their own moment of glory inside Huff Gym. Hebron wrote its own storybook ending by winning the 1952 state championship, defeating Quincy 64-59 in overtime. The small school out of northern Illinois only had 98 students at the time, dwarfed by the 1,035 students at Quincy. In the first-ever state title game that was broadcast on TV, Bill Schulz poured in a game-high 24 points for Hebron, with Paul Judson (13 points) and Phil Judson (12 points) also chipping in offensively as all five Hebron starters — Don Wilbrandt and Ken Spooner were the other two — played the entire game.

The only Champaign County high school to win a state championship in Champaign happened 74 years ago. Harry Combes’ 1945-46 Champaign High team, bolstered by future Illini Ted Beach, defeated Centralia 54-48 in the title game on March 16, 1946 as Beach scored a game-high 22 points and teammate Jim Cottrell complemented Beach’s output with 14 points. The Maroons opened their stay at Huff Gym with a 49-40 first-round win against Galesburg on March 14 as Earl Harrison (11 points), Rodney Fletcher (10 points), Beach (10 points) and Fred Major (nine points) all contributed. This advanced Champaign to a quarterfinal game against Marion on March 15, which the Maroons won 55-43 behind 15 points from Beach, 14 points from Fletcher and 13 points from Harrison. Champaign then started off its memorable final day at the state tournament with a 53-47 win against Rockford East in the state semifinals as Beach supplied a game-high 24 points to set the stage for the eventual historic championship win later that day. The Maroons ended the season with a sparkling 38-1 record.

Besides Champaign High’s 1946 state title, one other area school won a state title in C-U. That was Villa Grove in 1923. The four-team state tournament at the UI Men’s Gym Annex in Urbana saw the Blue Devils top Canton 38-23 in the state semifinals on March 16 and then come back the next day with a 32-29 win against Rockford in the state championship game. William Barmore stole the show for Villa Grove with a game-high 22 points in the title game that saw the school of 185 students knock off the northern Illinois school featuring 2,349 students.

After 25 years, State Farm Center will once again host the state tournament starting in 2021