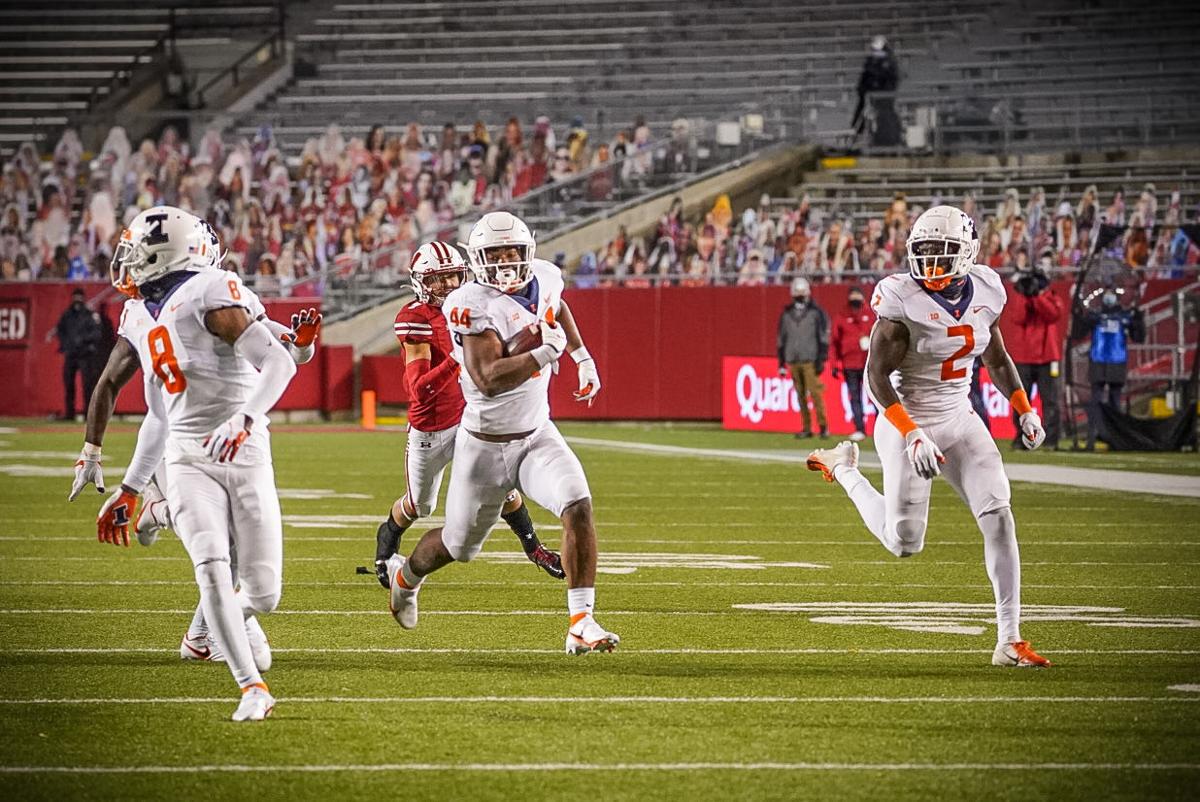 Illinois sophomore linebacker Tarique Barnes, center, scored the first Illini touchdown of the 2020 season on a 39-yard fumble return in the second quarter against No. 14 Wisconsin. 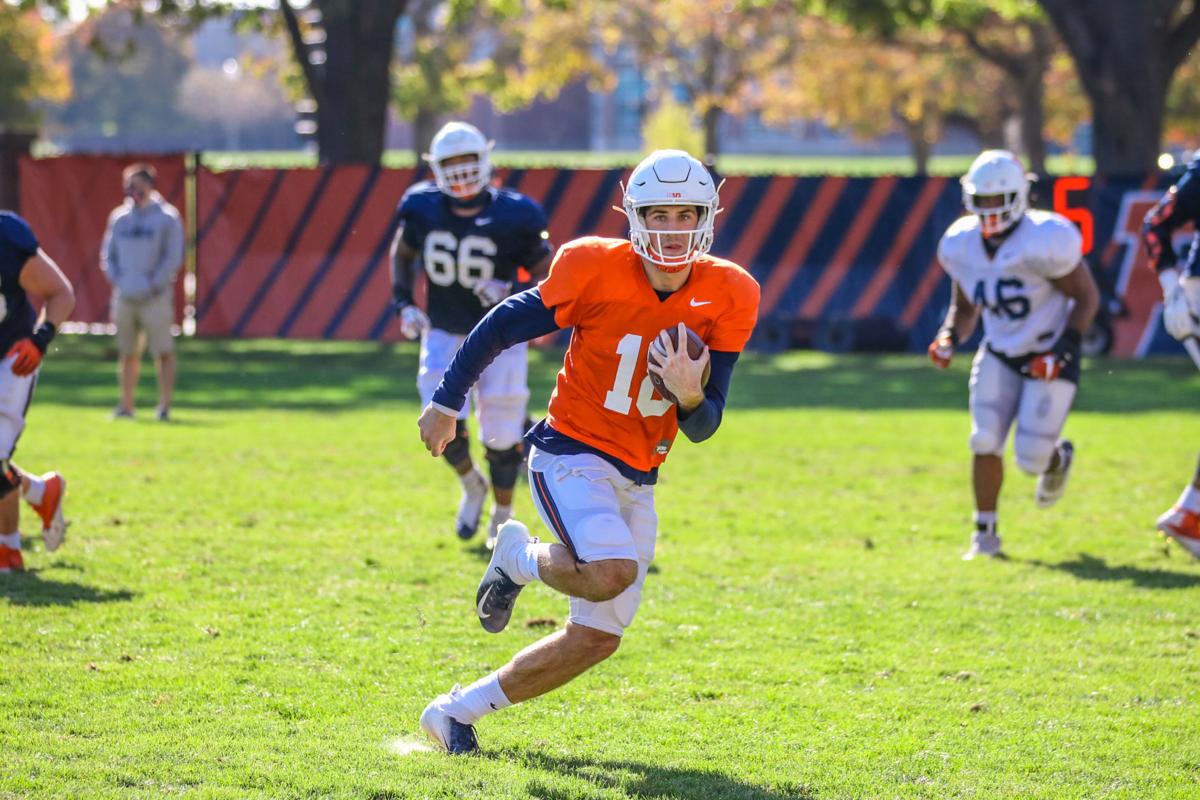 Quarterback Brandon Peters leads a deep and talented senior class for the 2020 Illinois football team, which opens the season at 7 p.m. on Friday at Wisconsin. 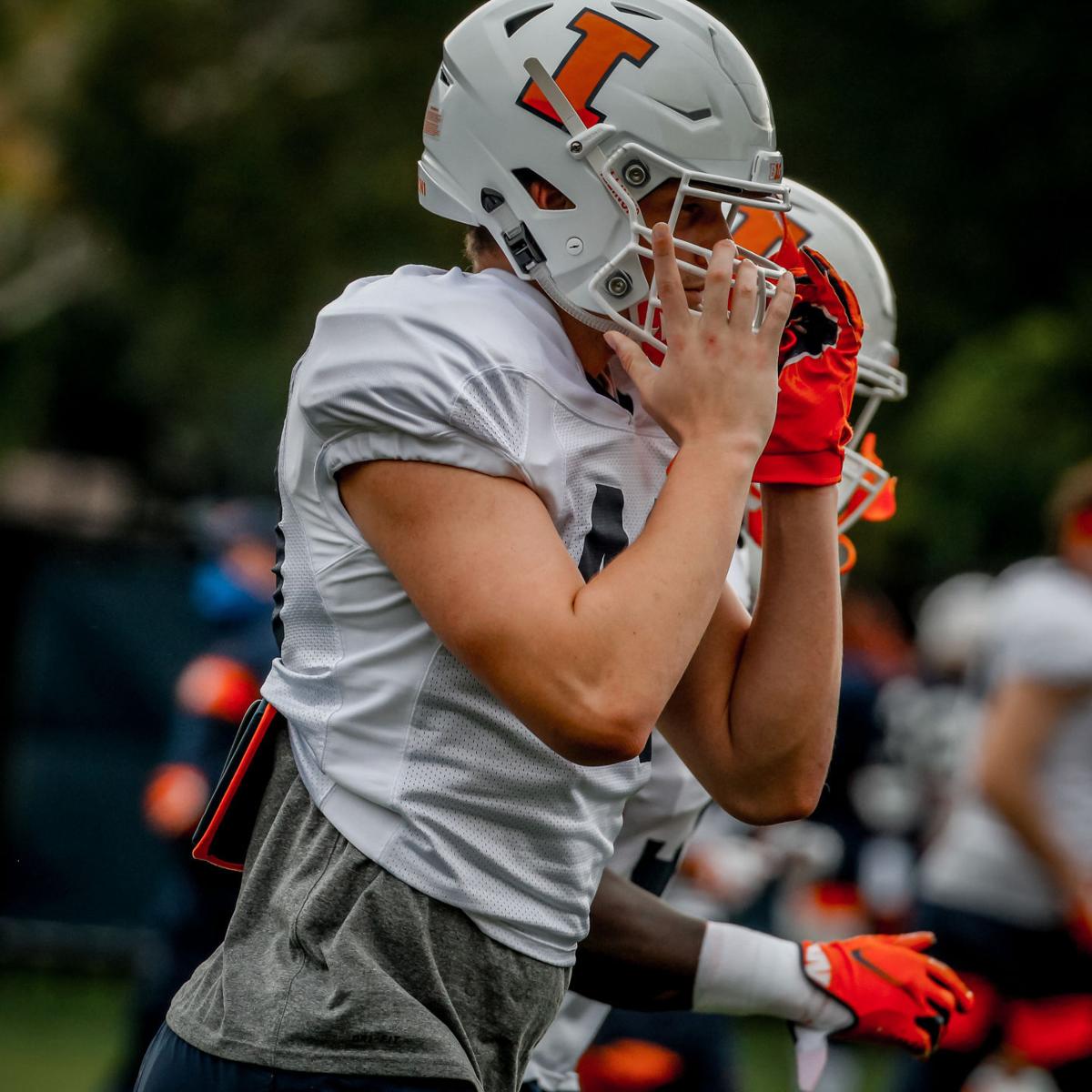 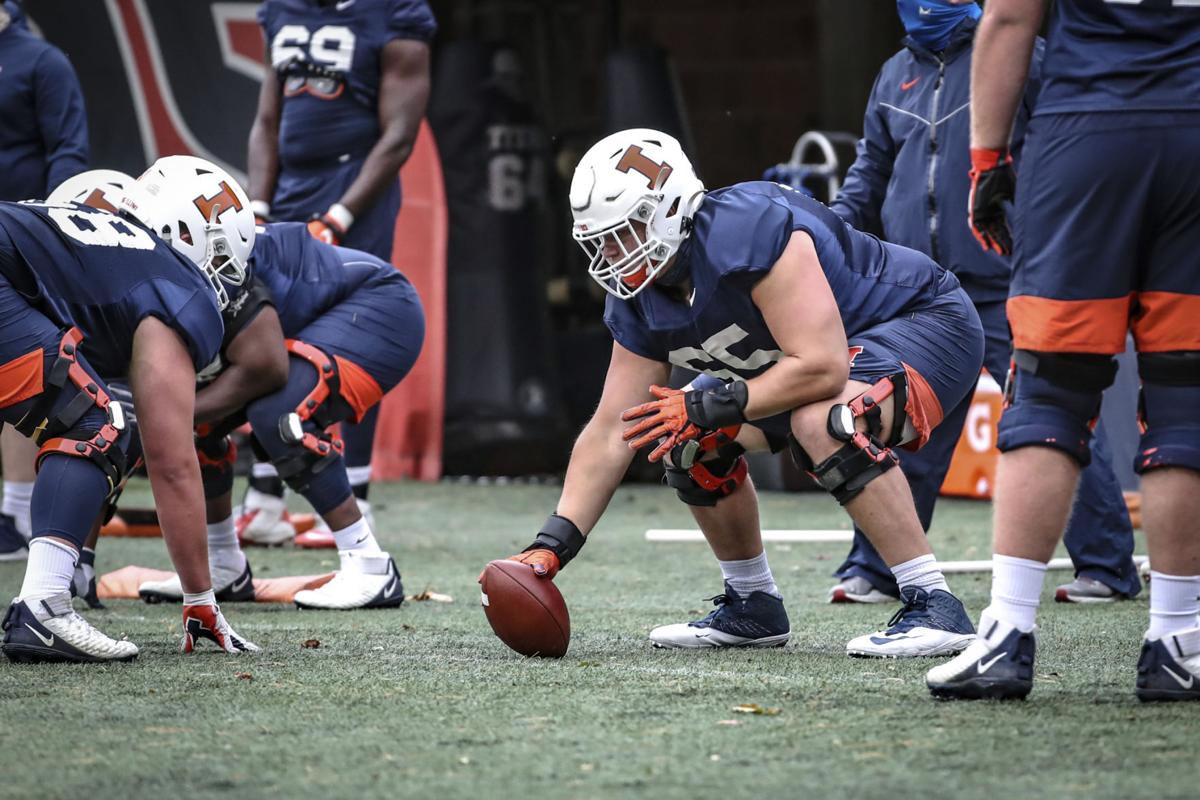 Center Doug Kramer is the anchor of an experienced Illinois offensive line with the Hinsdale product’s 32 career starts as an Illini trailing only Alex Palczewski’s 36. 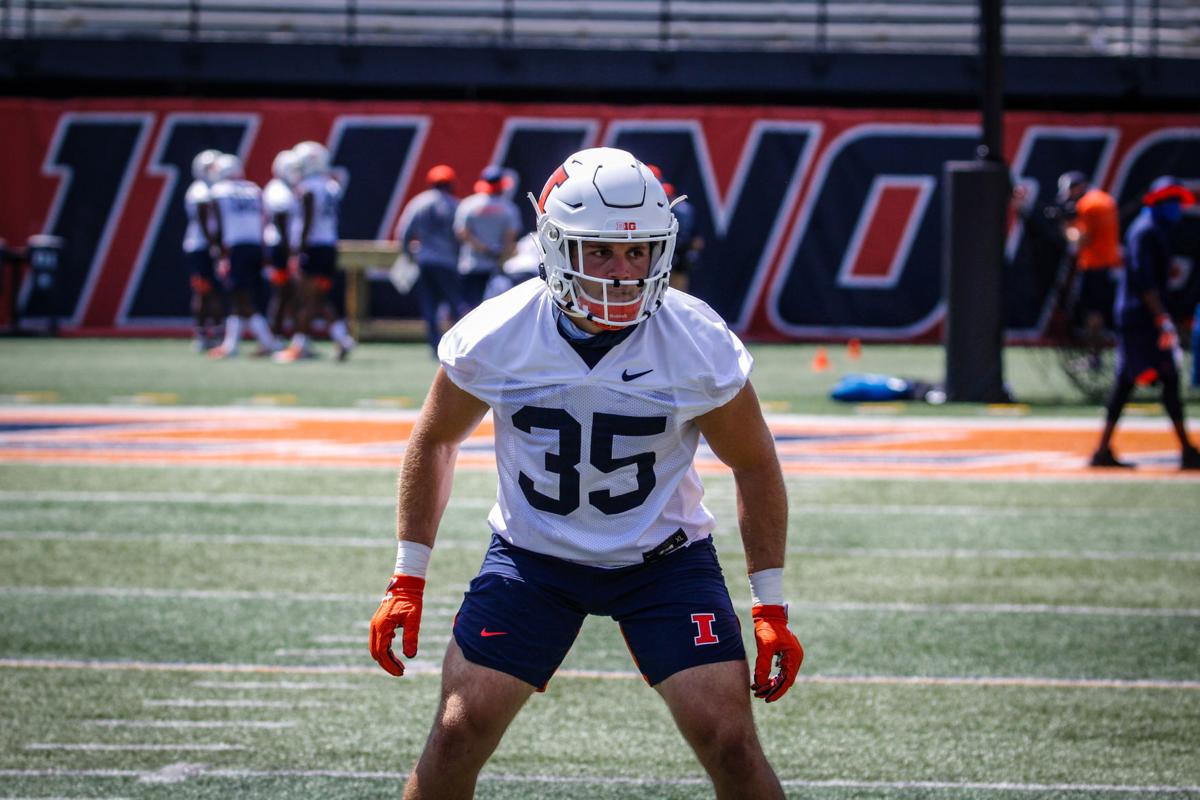 Illinois linebacker Jake Hansen during practice in August at Memorial Stadium in Champaign. 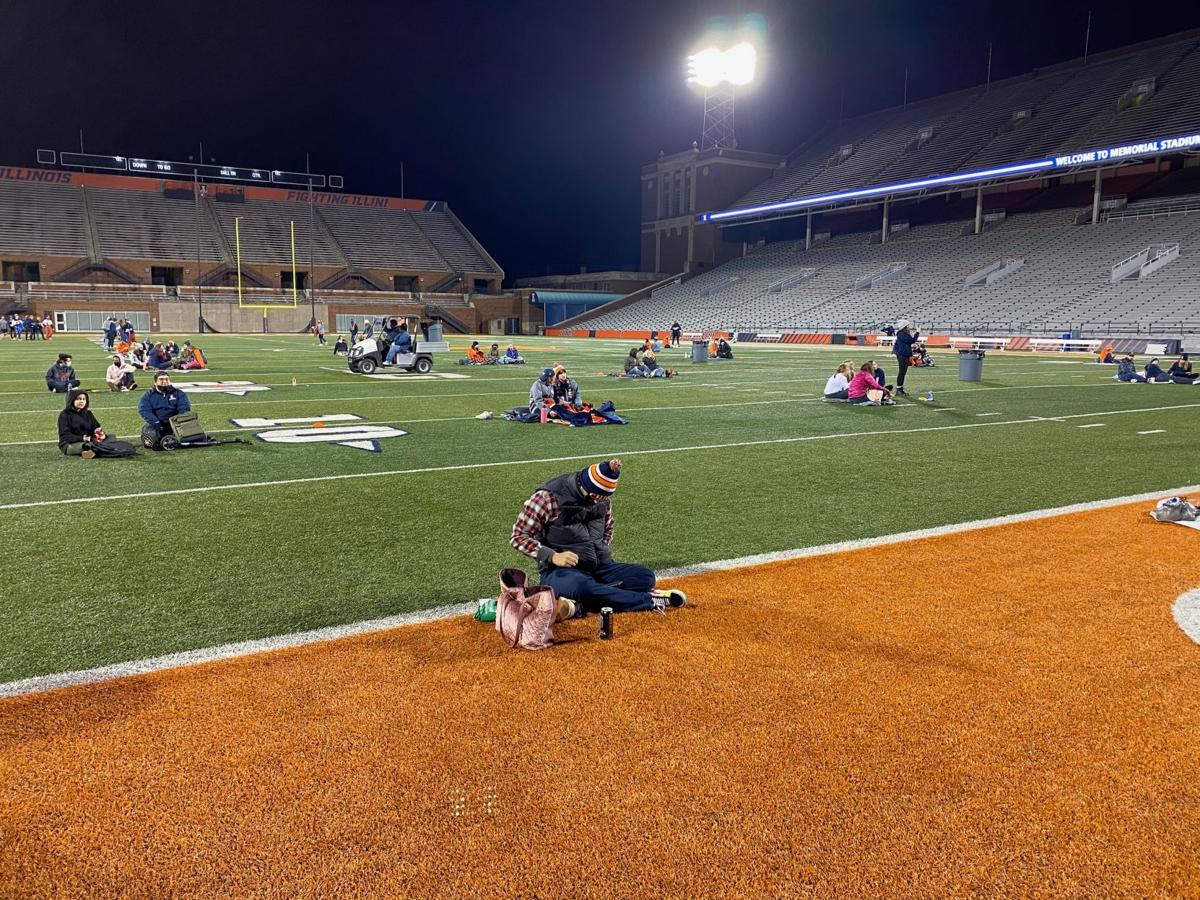 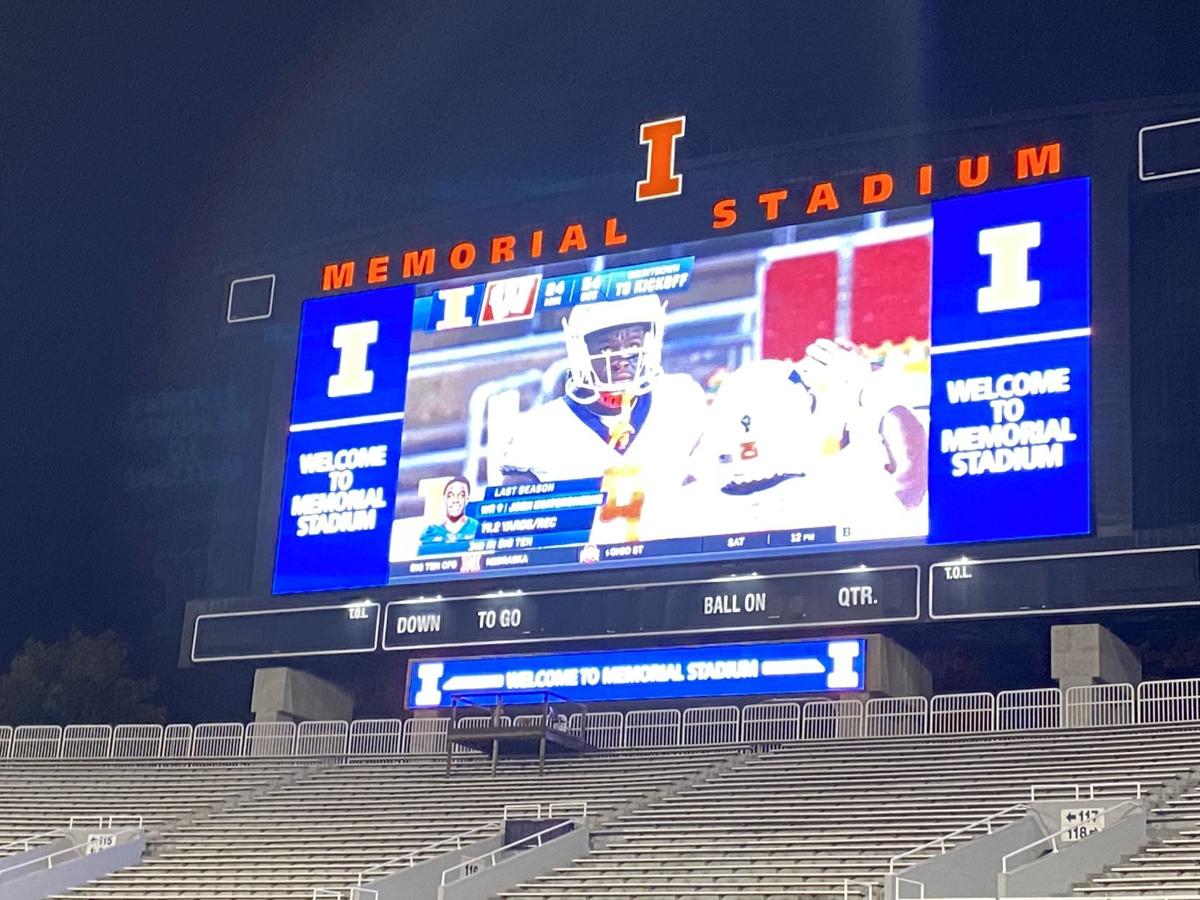 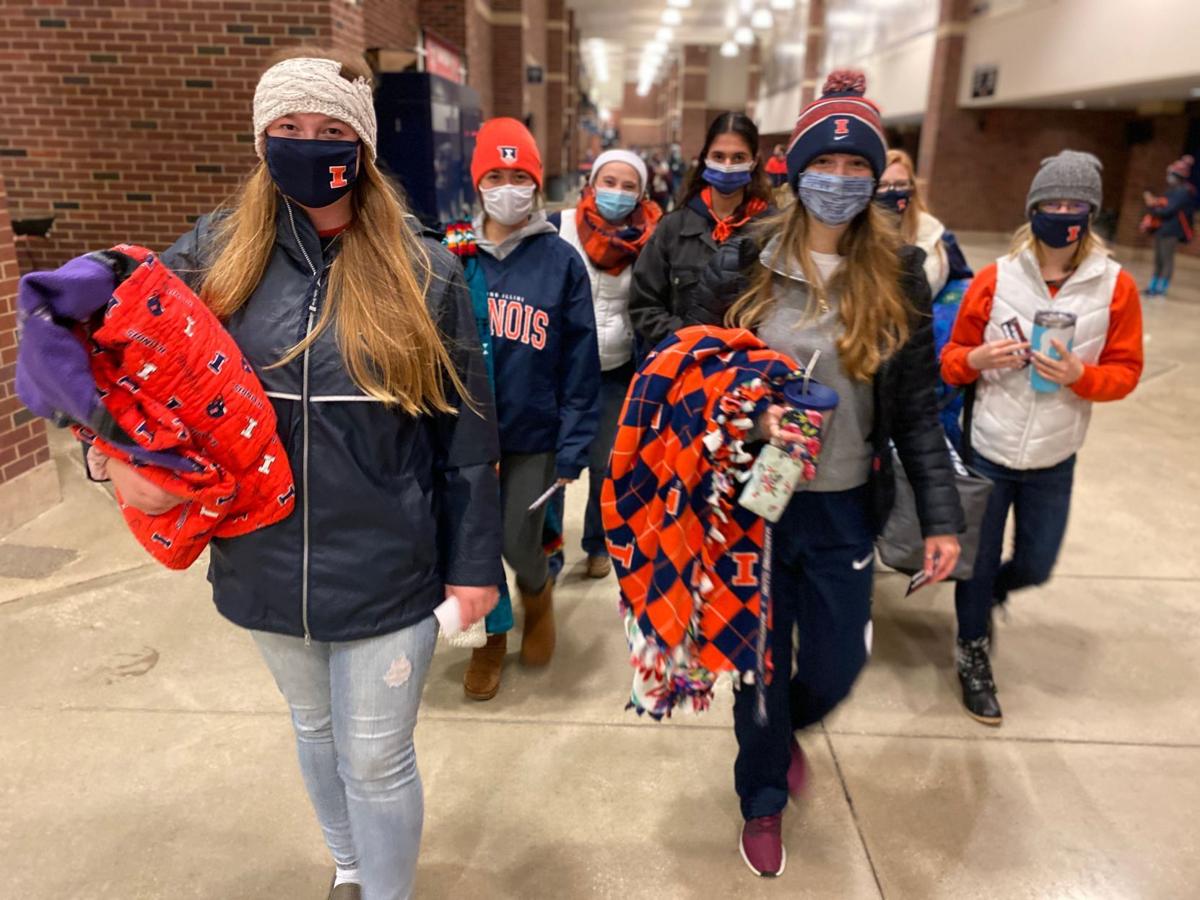 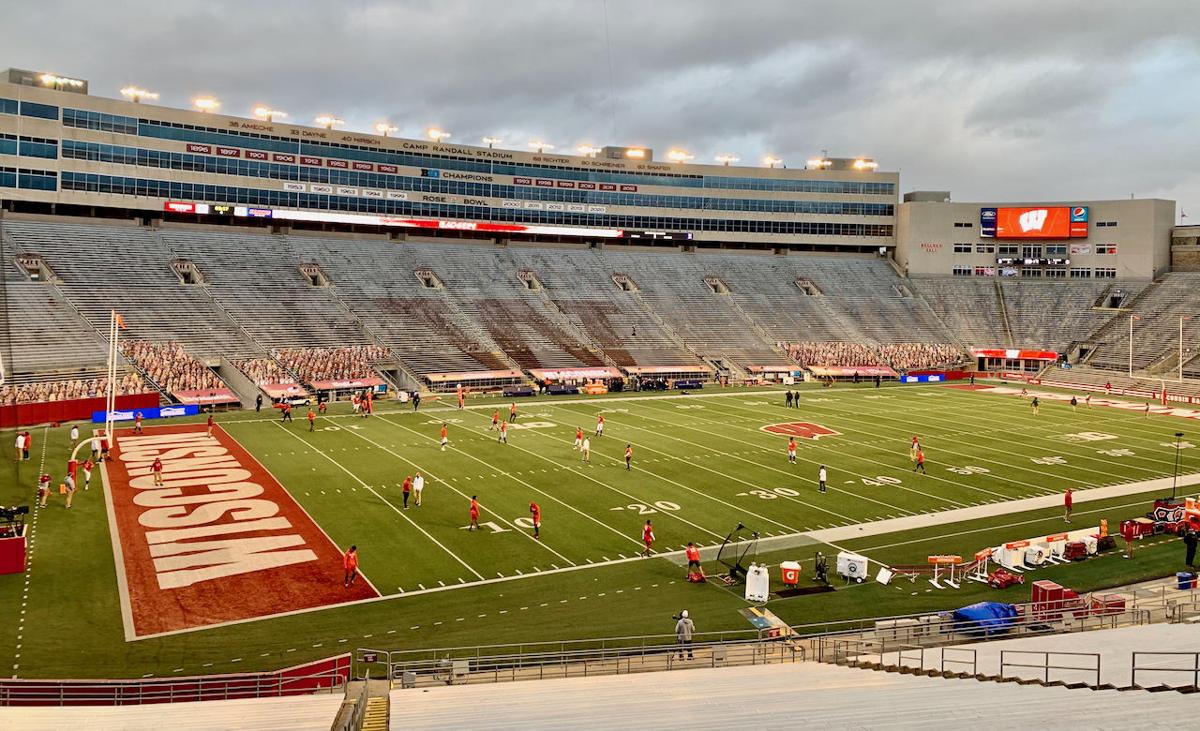 What's typically a jam packed Camp Randall Stadium will be empty Friday night when Illinois faces Wisconsin in the first Big Ten game of the 2020 season.

Illinois sophomore linebacker Tarique Barnes, center, scored the first Illini touchdown of the 2020 season on a 39-yard fumble return in the second quarter against No. 14 Wisconsin.

What's typically a jam packed Camp Randall Stadium will be empty Friday night when Illinois faces Wisconsin in the first Big Ten game of the 2020 season.

Meanwhile, back in Champaign. The watch party at Memorial Stadium is drawing a pretty good-sized student crowd.

We're about an hour from kickoff in Madison, and there's already some rather significant news to report. Illinois released its list of unavailable players for tonight's game, and there are some big names on it.

Defensive line was already a question mark heading into the season, and no Isaiah Gay only exacerbates that. Getting pressure on Wisconsin redshirt freshman quarterback Graham Mertz could be important. Gay's absence means Illinois will have to put an inexperienced defensive end on the field to start the game.

Devon Witherspoon being unavailable is just as big a blow. You might remember the sophomore cornerback from his game-saving tackle in last year's upset of Wisconsin. The big question, of course, is if Witherspoon is out does that mean Tony Adams moves back to corner or does Marquez Beason make his Illini debut as a starter?

Looking out from the Camp Randal Stadium press box to no one (save for some cardboard cutouts in the seats closest to the field) is a surreal feeling.

The press box itself is pretty empty, too. Wisconsin is taking the social distancing thing seriously. I'm at an end of a row, and I've got more than six feet between my seat and where the Chicago Tribune's Shannon Ryan will sit.

Warmups are underway, but for the moment only the specialists for both teams are on the field.

The News-Gazette will be represented at Camp Randall Stadium for tonight's Big Ten opener between Illinois and Wisconsin. Beat writer Scott Richey (that's me as I shift to first person) is, in fact, set up in an undisclosed Marriott-brand location in Wisconsin right now prepping for his gameday coverage.

In a typical year I might venture out in Madison. Check out campus (again). In 2020? Hotel. Camp Randall. Nothing in between. Especially in Wisconsin.

The hotel was even a concession to 2020, in a way. The press box at Camp Randall is set to close 30 minutes after the last Zoom interview is complete. That's not enough time to provide you all with the exhaustive coverage that will wind up right here at IlliniHQ.com in the wee hours Saturday morning. That and much more will grace the pages of Sunday's News-Gazette.

The strangeness of 2020 aside, the drive from Champaign to Madison was exceedingly normal. I could have done without the rain, but being back on the road for the first time since early March (Illini basketball at Ohio State) was a surreal feeling. Then I hit the construction as soon as I crossed the Illinois-Wisconsin border, and all felt right with the world. It was a sign that at least some things never, ever, ever change.

Gameday preview: Illinois at No. 14 Wisconsin

Here's what you should expect in the Illini's season opener

Ask the beat writer: How important is the Illinois secondary against Wisconsin's running game?

'Last year, when we played Wisconsin, it was an all-around effort by everybody,' defensive lineman Jamal Woods said

Well, here we go again. The 2020 Illinois football, once thought lost to the ongoing COVID-19 pandemic, starts tonight in Madison, Wis. The Illini don't ease into it either, with No. 14 Wisconsin first up in the revised (times two) Big Ten schedule.

No nonconference warmup in 2020. No shot at an Illinois State or UConn or Bowling Green before jumping into Big Ten play. No, it's a headfirst dive into the deep end immediately instead.

The Illini and Badgers kick of at 7 p.m. at Camp Randal Stadium. Most will be listening (check out Brian Barnhart and Martin O'Donnell on WDWS) or watching from home. The Big Ten has banned fans in 2020, and even the allowance for families of players and coaches has been put on pause in Madison.

While you get ready for the start of the most unique Illinois football season in more than a century, catch up on our exhaustive preseason coverage leading up to today's game. It was a team effort by the entire N-G sports staff, including long-time beat writer Bob Asmussen, sports editor Matt Daniels, preps writer Colin Likas with a major assist, copy editor Joe Vozzelli and beat writer Scott Richey.

Richey will represent the N-G in Madison as one of just six Illinois media credentialed to make the trip in the new COVID-19 world we're living in. He'll provide updates throughout the day and late into the night as befitting a 7 p.m. kickoff. (Don't ask his opinion on that. Or do. He doesn't mind sharing).

As always, right here at IlliniHQ.com is where all your gameday needs will be answered, including more from our preseason deep dive on the Illini:

CHAMPAIGN — Illinois football players have taken an active stance on social justice issues in the last few months, including an athlete-organized march in late August against police violence and racial injustice. Redshirt junior offensive lineman Kendrick Green and senior cornerback Nate Hobbs spearheaded that initiative, and others have been active on social media to promote awareness, too.

The Illini will use Friday’s season opener at No. 14 Wisconsin to further that cause. Illinois will replace its traditional orange and blue Block I helmet decal with a black Block I instead.

“We wanted to show that we are aware of what’s happening in our country right now,” Hobbs said in an official release. “We’re willing to take a stand, not as one, but as a unit.”

Asmussen | Illini, get ready for a college football season like no other

Well, almost empty ... except for the cardboard cutouts of fans ($50 to $99 a pop) and the faux Marching Illini.

In five minutes, Illinois and Iowa will run onto Zuppke Field to no applause, other than what’s generated by the loudspeakers and scoreboards.

No smell of roasting hot dogs or popcorn in the air. No beers being spilled on people in the next row.

Outside beautiful Memorial Stadium, the usual hustle and bustle are absent.

If the Dick Butkus and Red Grange statues could talk, it would be some version of, “What the heck is going on around here?”

CHAMPAIGN — Bryce Barnes is readily visible for about 2 seconds.

His nameplate and number 48, in dark blue print on a gray uniform backdrop, are seen bouncing around before being sucked into a sea of humanity.

The then-Illinois football freshman turns into one small piece of a massive celebration, set off by James McCourt’s 39-yard field goal that allowed the Illini to upset No. 6 Wisconsin 24-23 at Memorial Stadium on Oct. 19, 2019.

Of course, Barnes lived the moment. And the 2019 Gibson City-Melvin-Sibley graduate can provide a slightly different perspective from it.

“I ended up at the bottom of the pile, and (McCourt and I) were face to face underneath everybody,” said Barnes, who was blocking on the line as McCourt booted the ball through the uprights in front of the Illini band and student section. “It was an honor for me to be out there in such a big win for this program. I wanted to start crying just because of how happy I was.”

More from the local Illini:

Catching up with Ben Schultz and Dylan Thomas

Danville product Caleb Griffin gets creative ahead of season

CHAMPAIGN — Kendrick Green, Doug Kramer, Vederian Lowe and Alex Palczewski have learned a lot about each other over the years.

Along with new-to-the-lineup Verdis Brown, they will make up the starting offensive line Friday night at No. 14 Wisconsin.

They are close. Not in a forced way. But naturally.

“I think it’s really simple,” Kramer said Tuesday. “There’s never been too many issues in our room. We’ve been friends from the start.”

“We’ve just seen each other grow up over these past three years,” Palczewski added. “We’ve all grown up from these freshmen who didn’t know what was going on.”

To their credit, they got better. Four wins in ‘18 and six last season.

Now, they want to take another step. Toward the top of the Big Ten West.

A unique Illini gameday in C-U

Ask the beat writer: Playing in an empty Camp Randall

It’s the only way to describe Hansen’s entrance — cigar in his hands and a smile on his face.

Hansen also made a point of noting just how much the people that set the gambling lines considered the Illini underdogs against the Badgers.

“Thirty-one point spread, huh?” the Illinois linebacker yelled out as he made his way from a celebratory locker room to the small lobby outside the Smith Center weight room filled with reporters.

Monday marked the one-year anniversary of the biggest Illinois football win in more than a decade. It also coincided with the line for this year’s rematch with Wisconsin receiving a slight adjustment.

Starters have Smith comfortable with cornerbacks