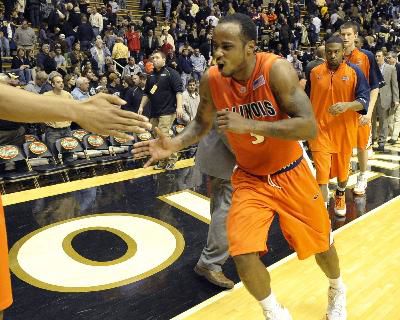 Senior Chester Frazier celebrates as he leads the Illini off the floor after a 71-67 overtime upset Tuesday at ninth-ranked Purdue. 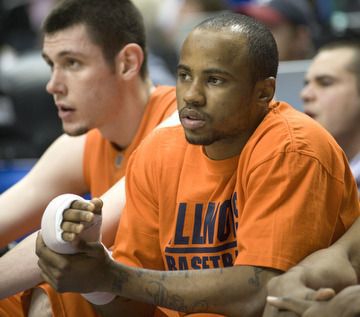 Chester Frazier on the bench. 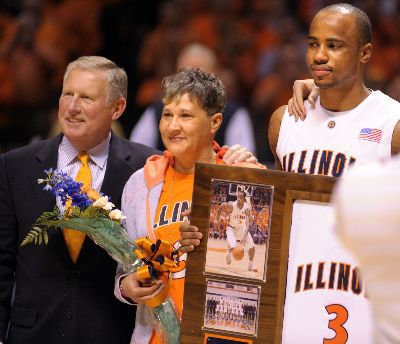 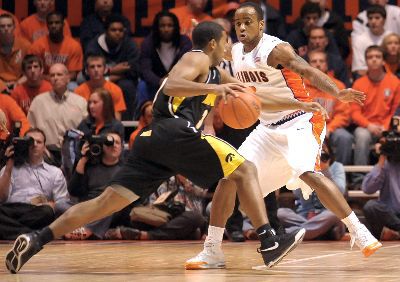 Let's take a look back through the archives after Thursday's news that former Illinois guard Chester Frazier was returning to Champaign as an assistant coach on Brad Underwood's staff.

Like the fact this isn't Frazier's first time on staff for the Illini. He spent some time working for Bruce Weber after playing for him.

CHAMPAIGN – It's an odd sight, seeing Chester Frazier holed up at a cubicle in the Illinois basketball offices.Not too odd, though. In a matter of minutes he's back on the court – ah, that's more like it – working a day camp for kids who idolize the popular former Illini. Still later, he's imploring guys to "Run!" on a fast break with the current players at the team's practice facility.

CHAMPAIGN – Chester Frazier's voice is rising into a fever pitch."See that! You've got to use the screen! You'll be wide open!"

Frazier's Illinois playing career ended on a bit of a sour note, of course. He broke his hand before the Big Ten tournament and then missed both that and the NCAA tournament. His time as an Illini (player at least) ended on the bench.

Frazier: 'I just wish I was out there'

PORTLAND, Ore. – Bruce Weber's wish was that one game in the NCAA tournament wouldn't define a season that offered so much promise.So how does a first-round exit impact their memory of this season?"It changes it right now," sophomore Mike Davis said, "But in a couple weeks we'll look back on it and see we had a great season."

Chester Frazier looks back at his time at Illinois

Frazier might never have been a major offensive weapon for Illinois given he averaged 4.9 points for his career (with a high of 7.2 points per game as a sophomore), but his toughness and ability on the defensive end won him plenty of fans. Just not from other Big Ten teams.

CHAMPAIGN — As Joe Krabbenhoft stepped into the Madison cold, the burly Wisconsin forward noticed a familiar car heading out of the parking lot.It belonged to Bo Ryan, the Badgers' coach, who was on his way home from the Kohl Center.

Good Morning, Illini Nation: An alum on the bench