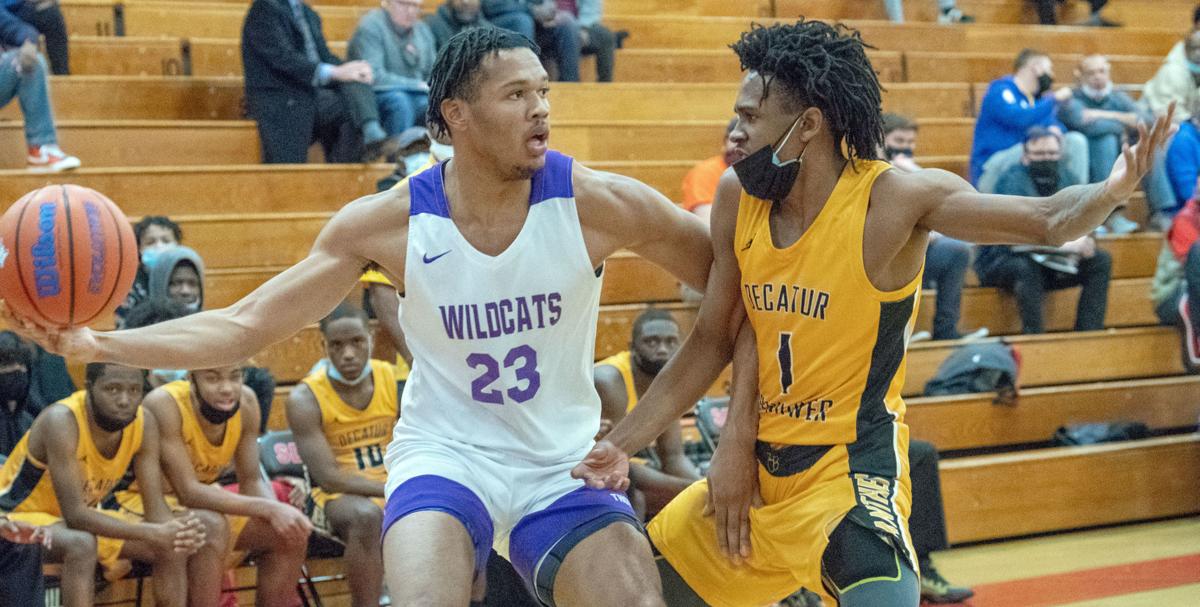 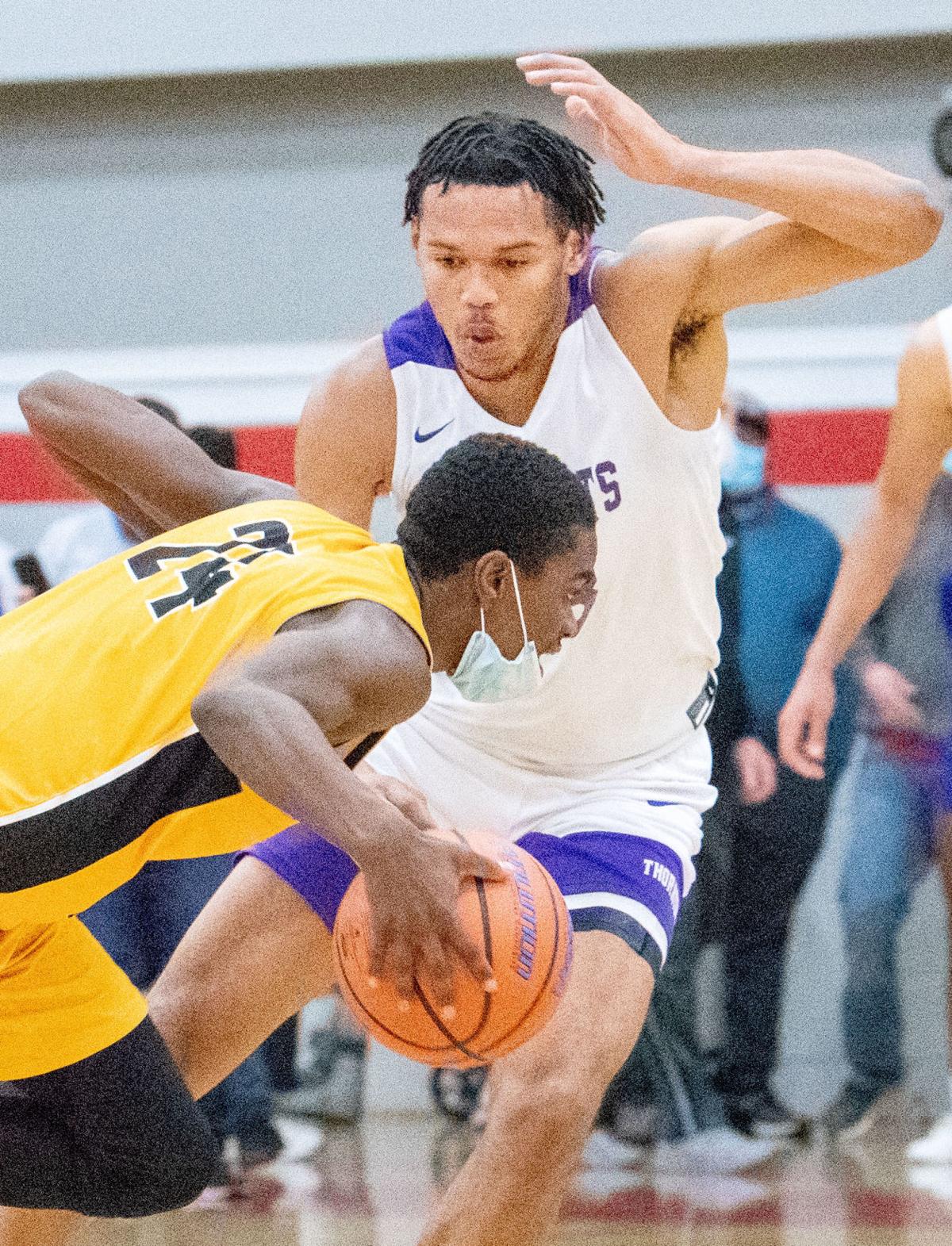 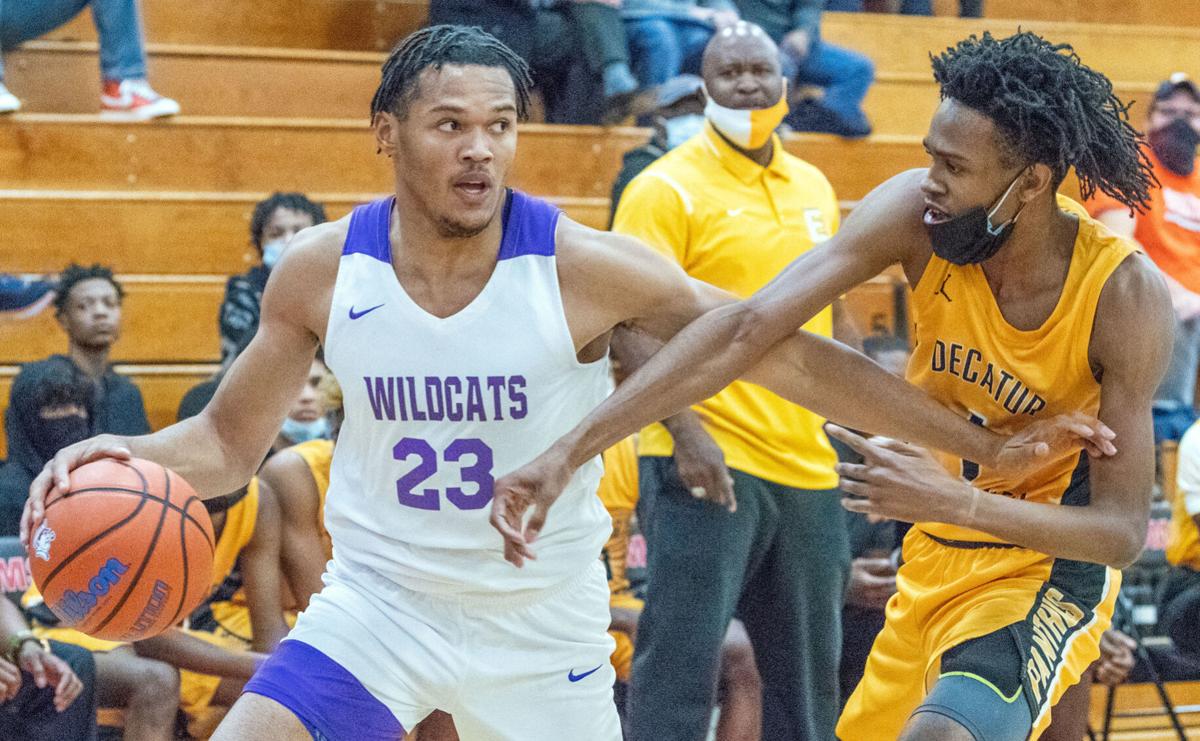 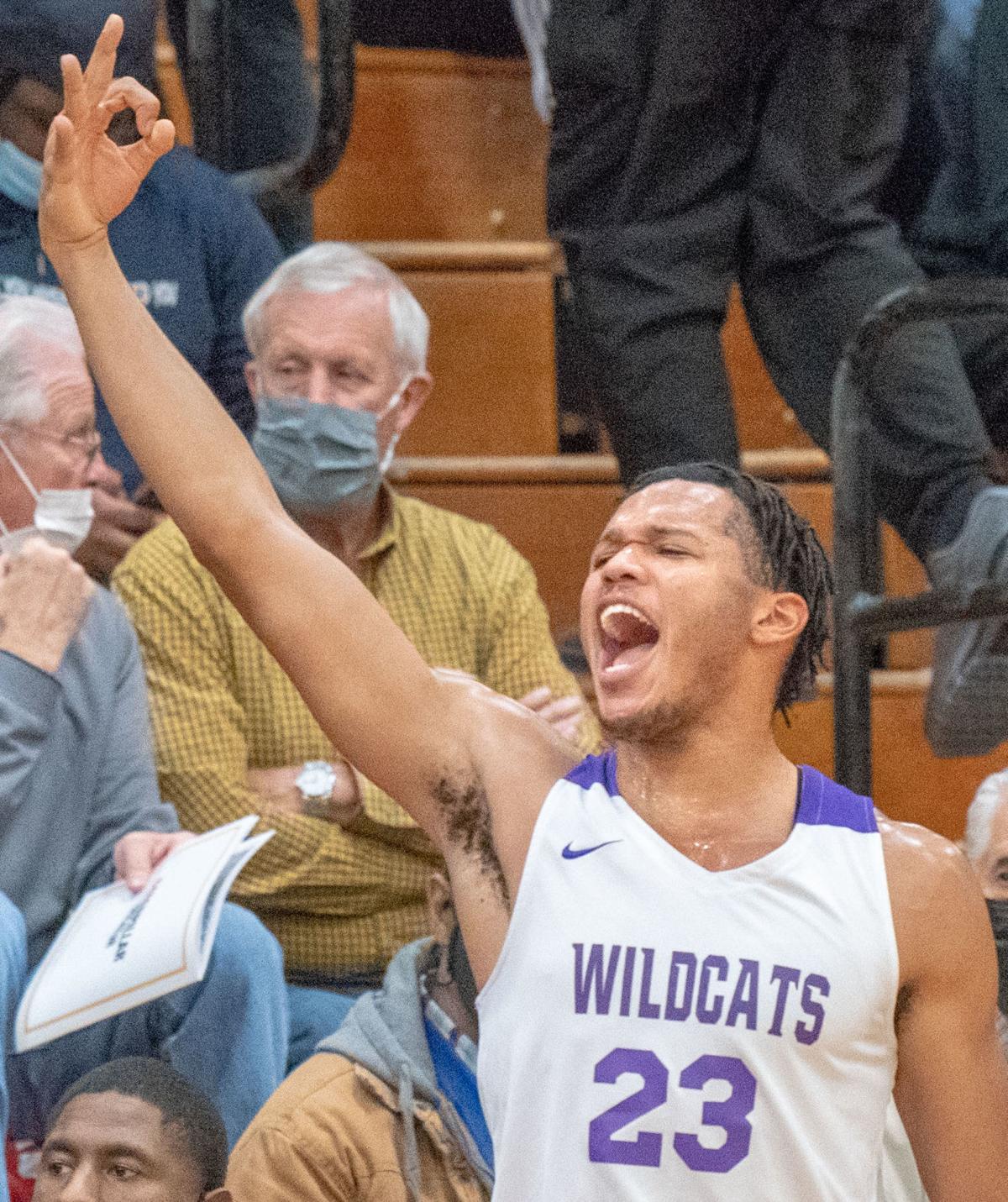 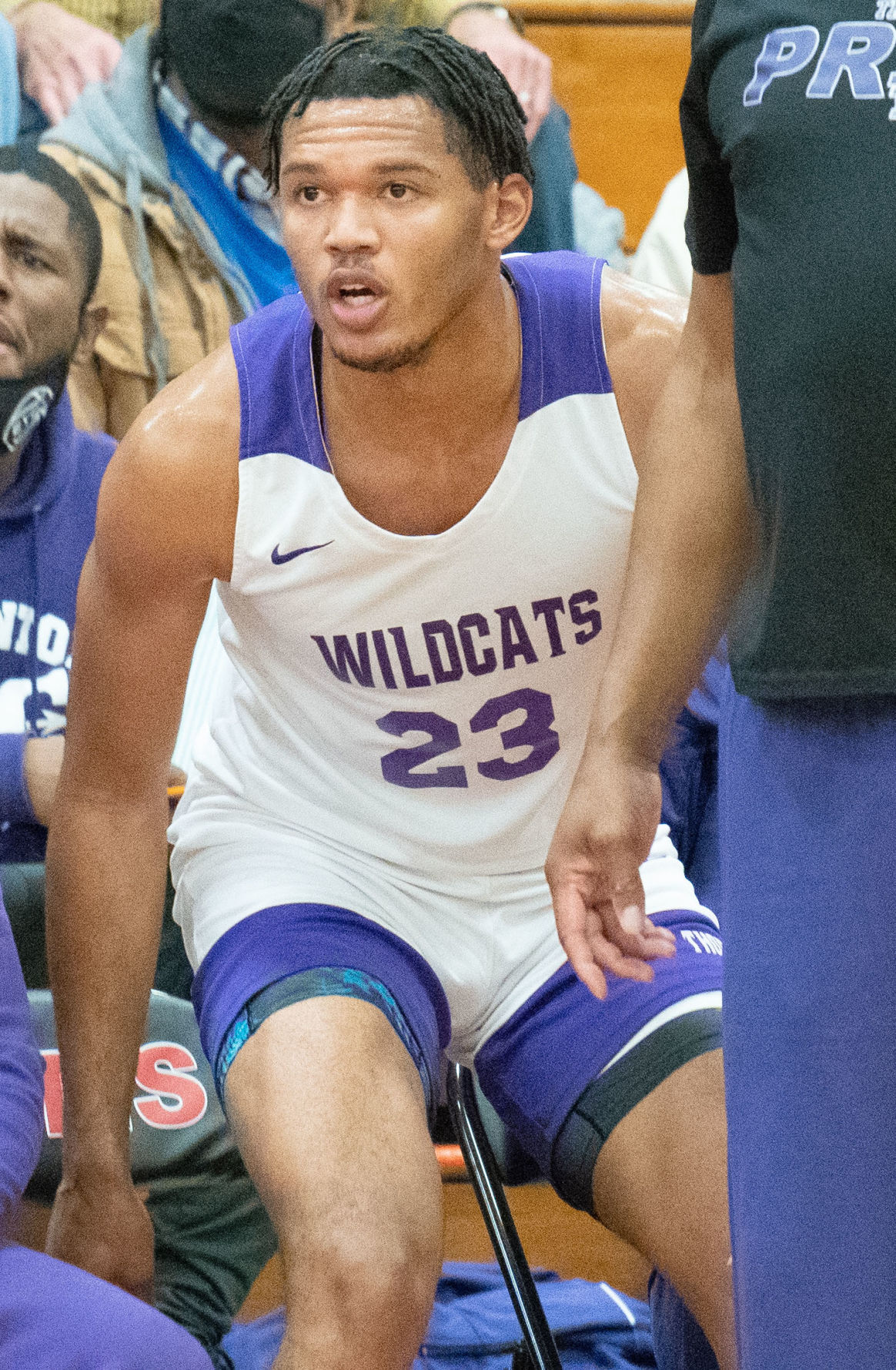 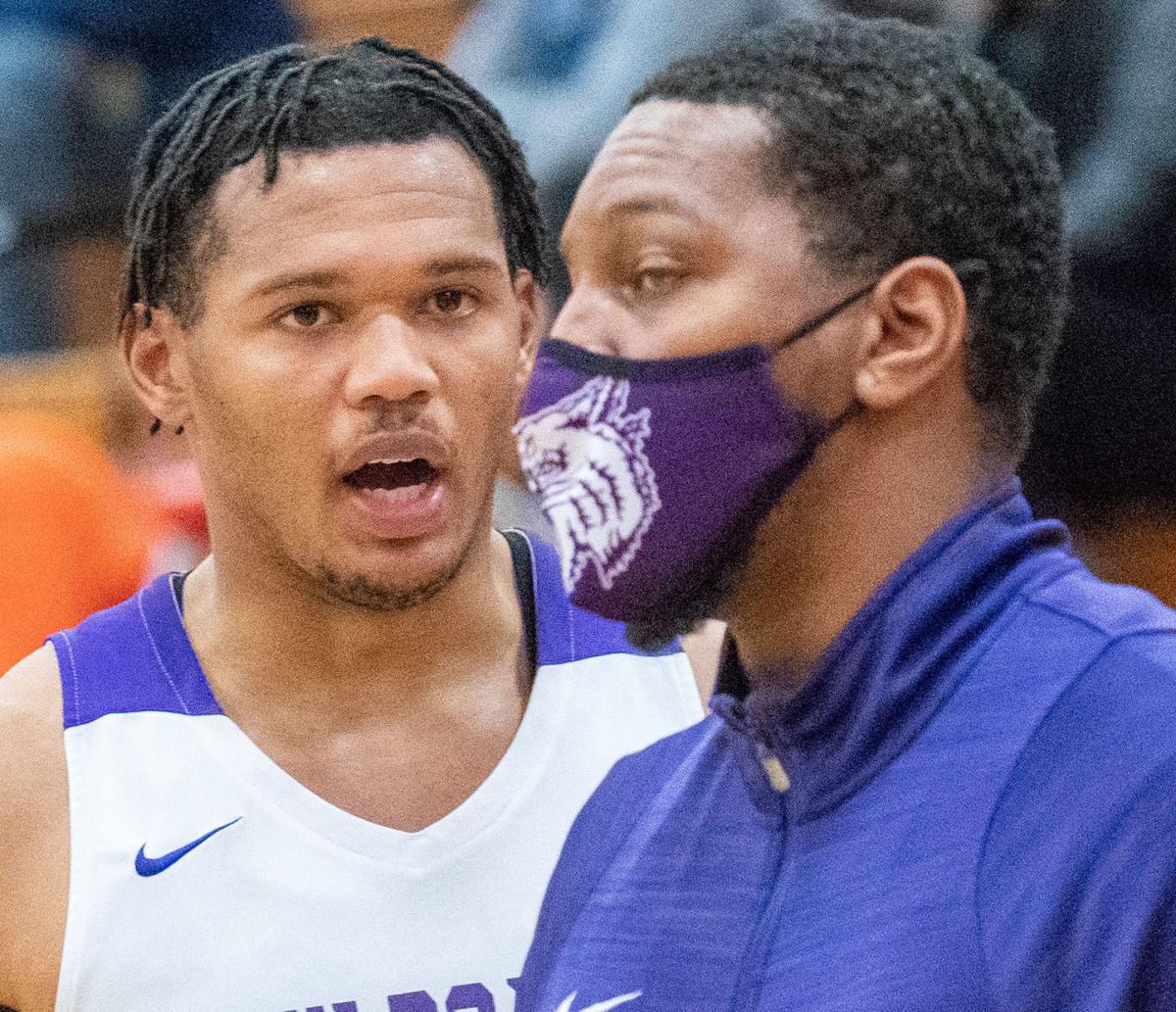 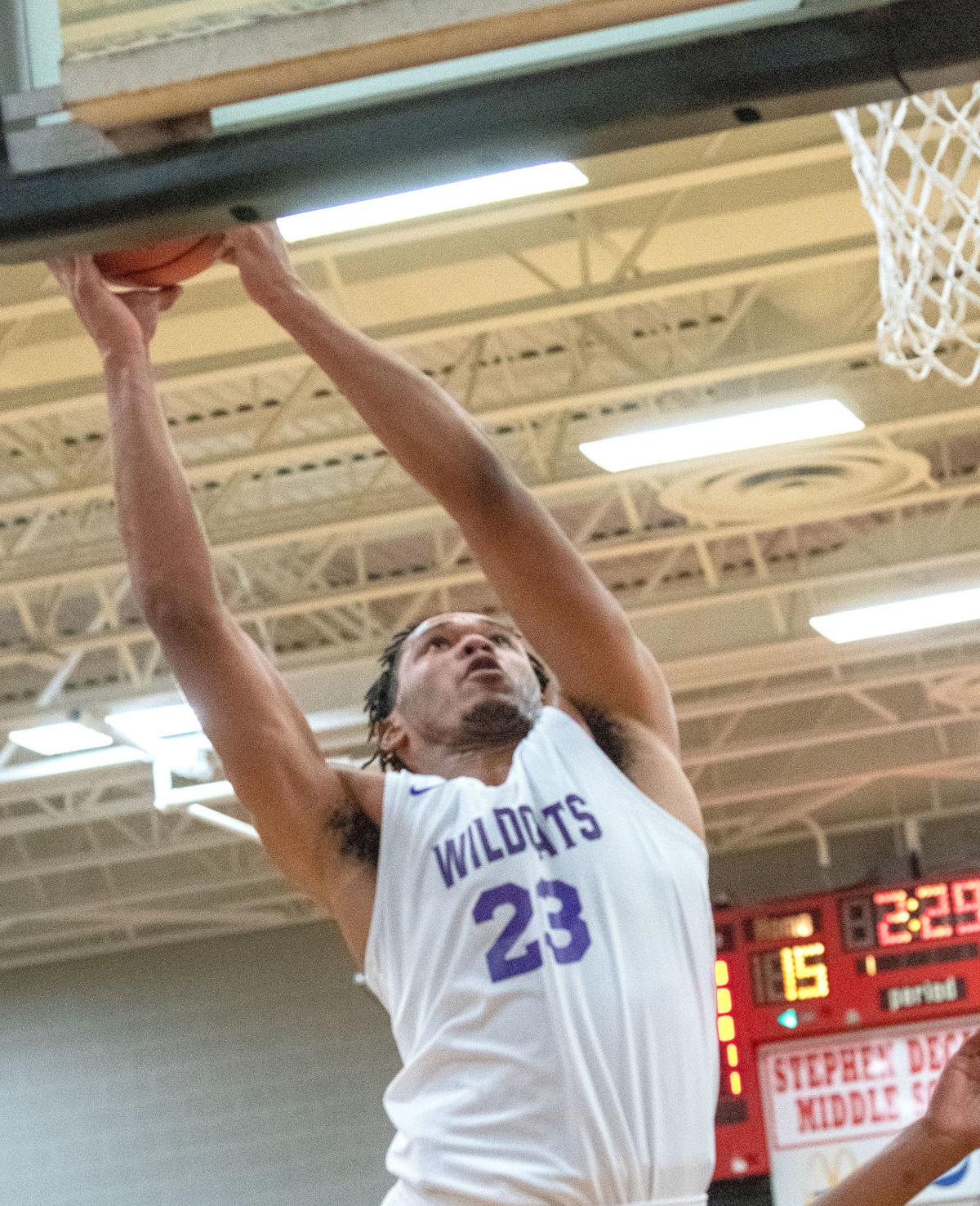 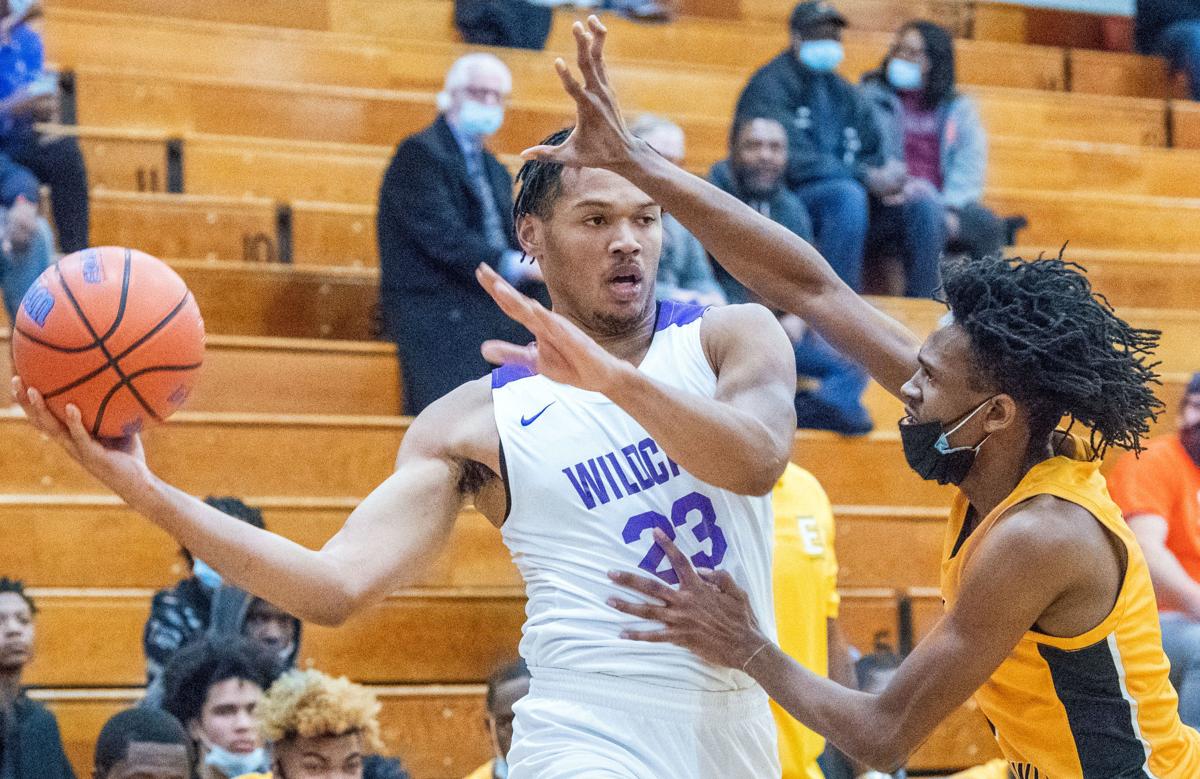 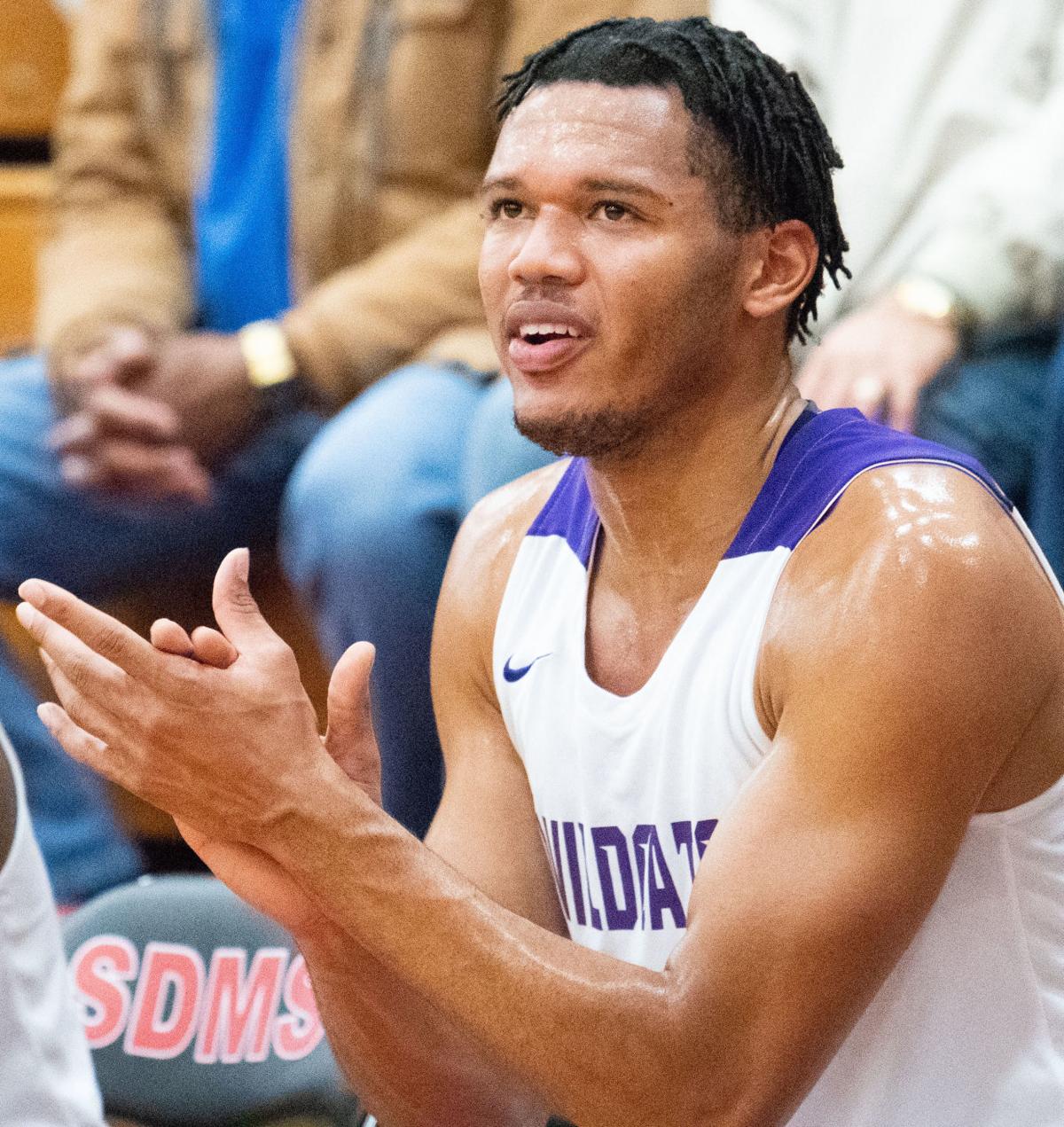 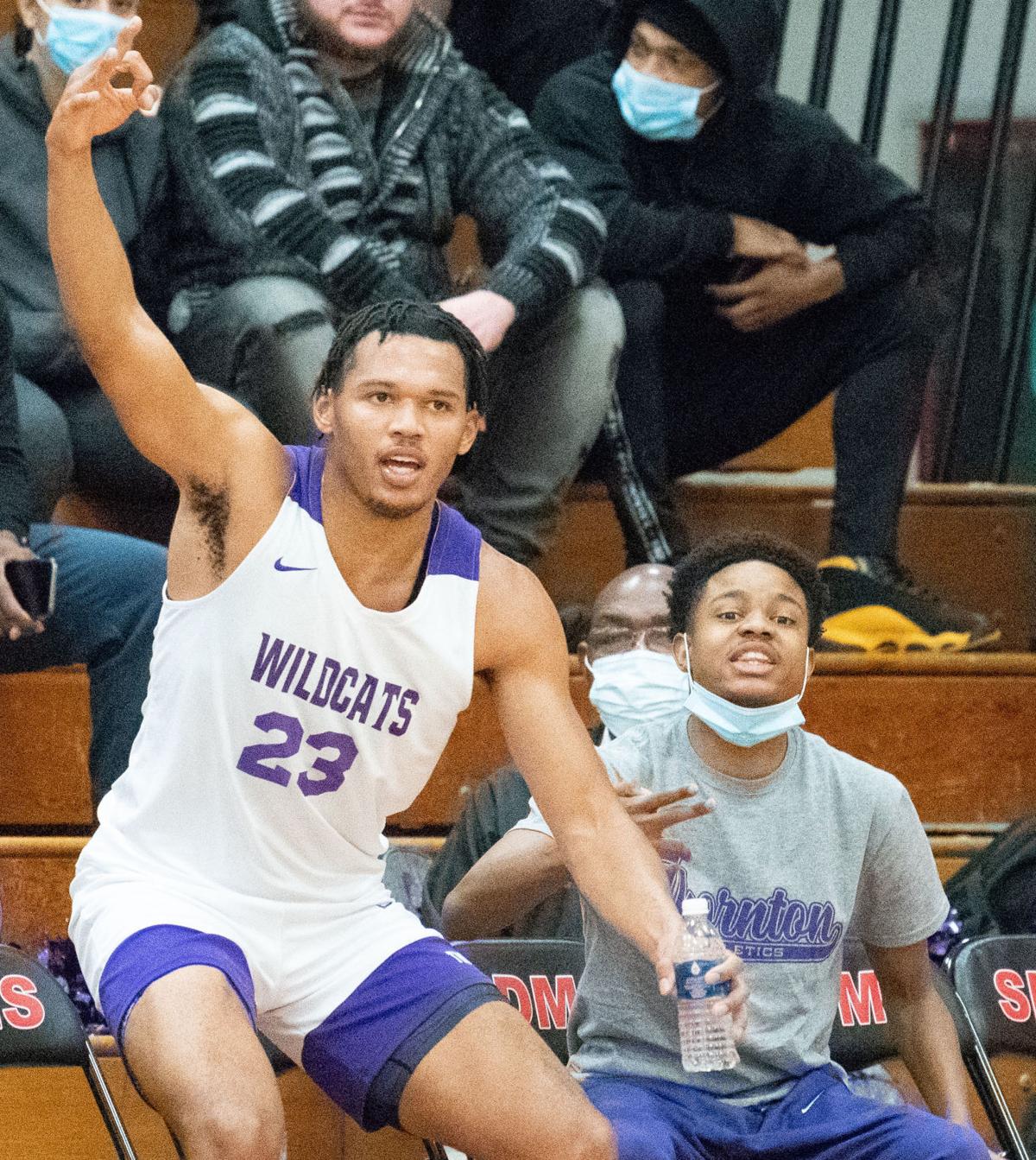 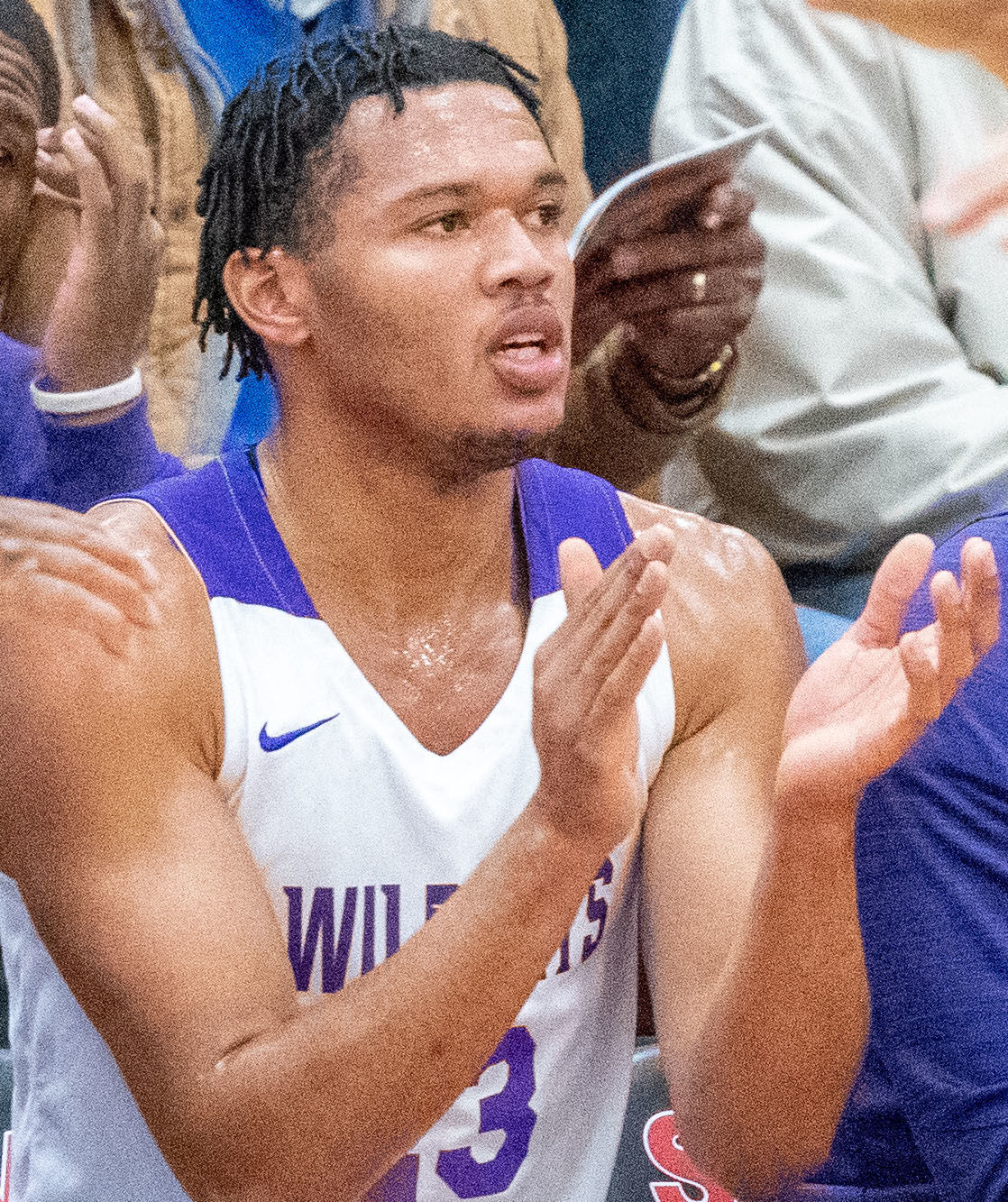 Thornton's Ty Rodgers (23) cheers for his teammates while on the bench vs. Decatur Eisenhower in a Decatur Turkey Tournament game at Stephen Decatur Middle School on Turesdfay, Nov. 23, 2021. 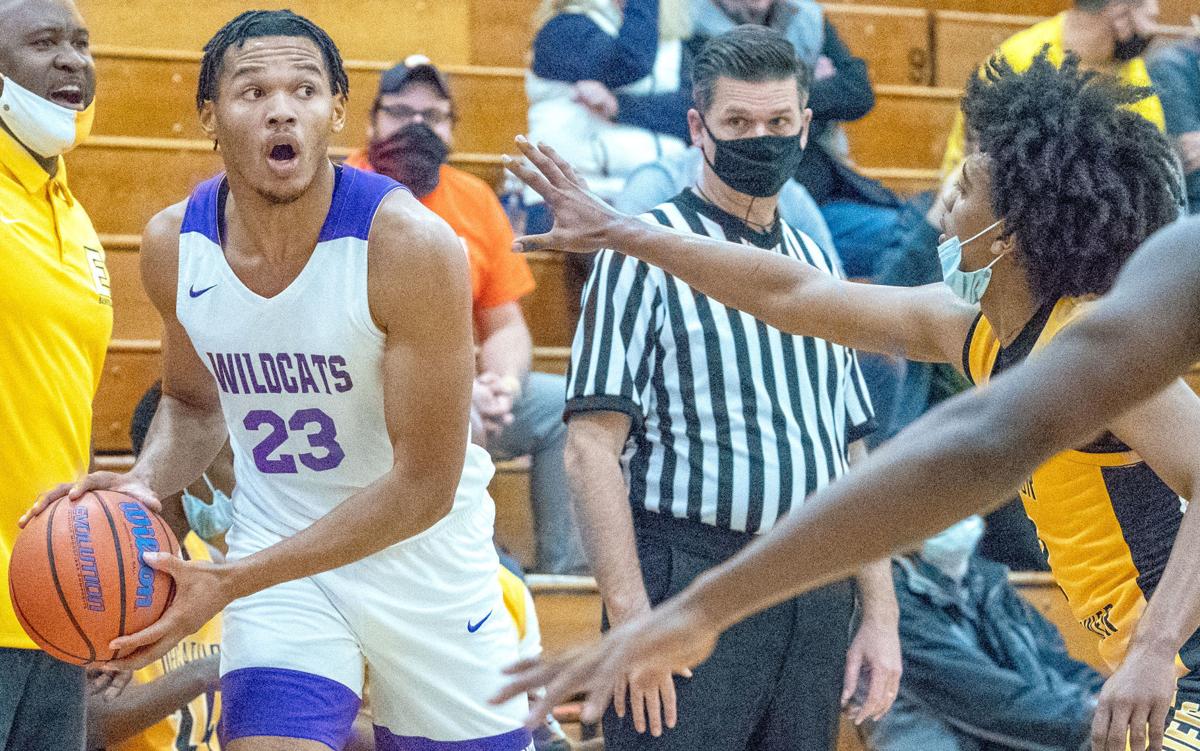 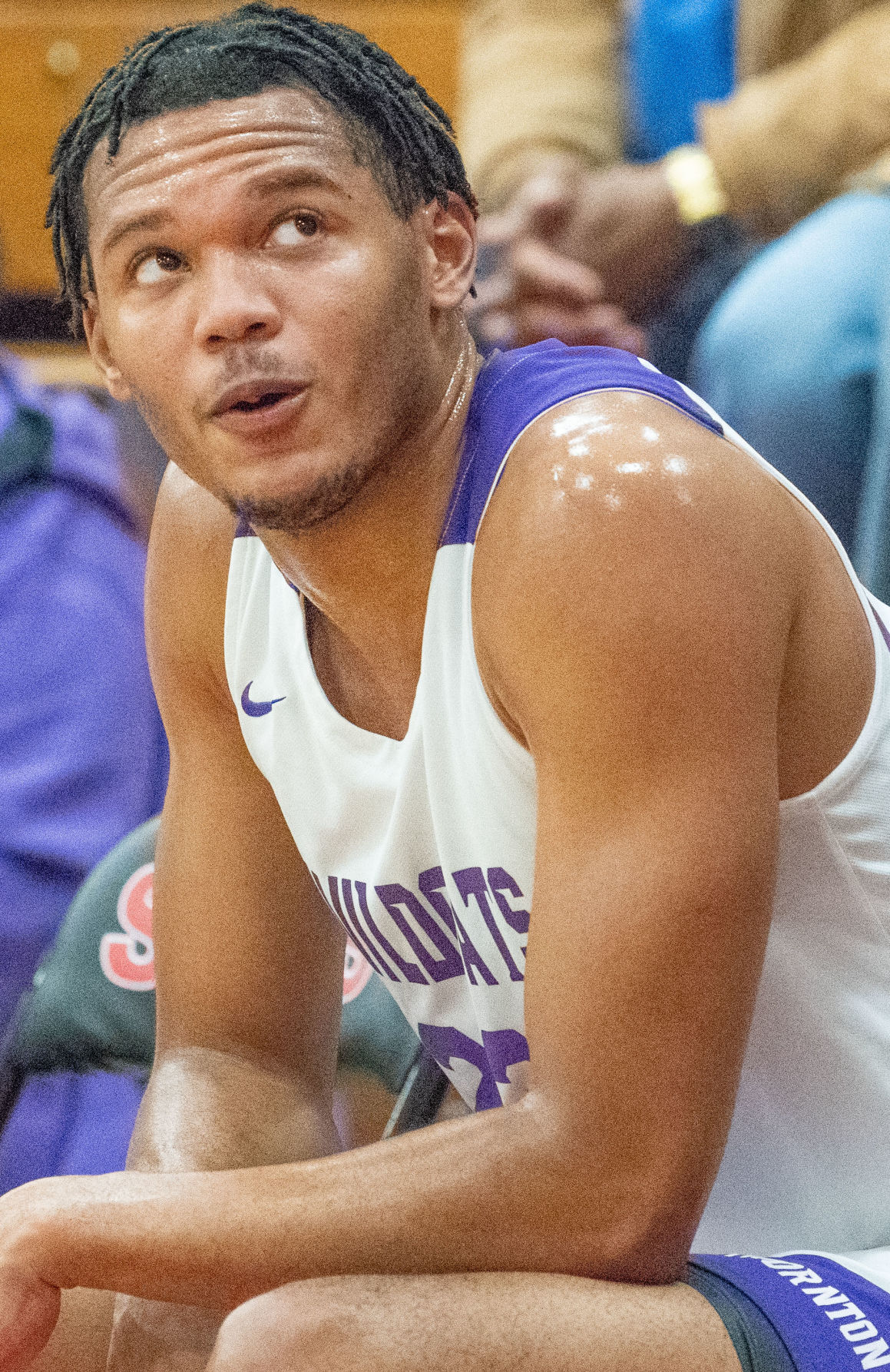 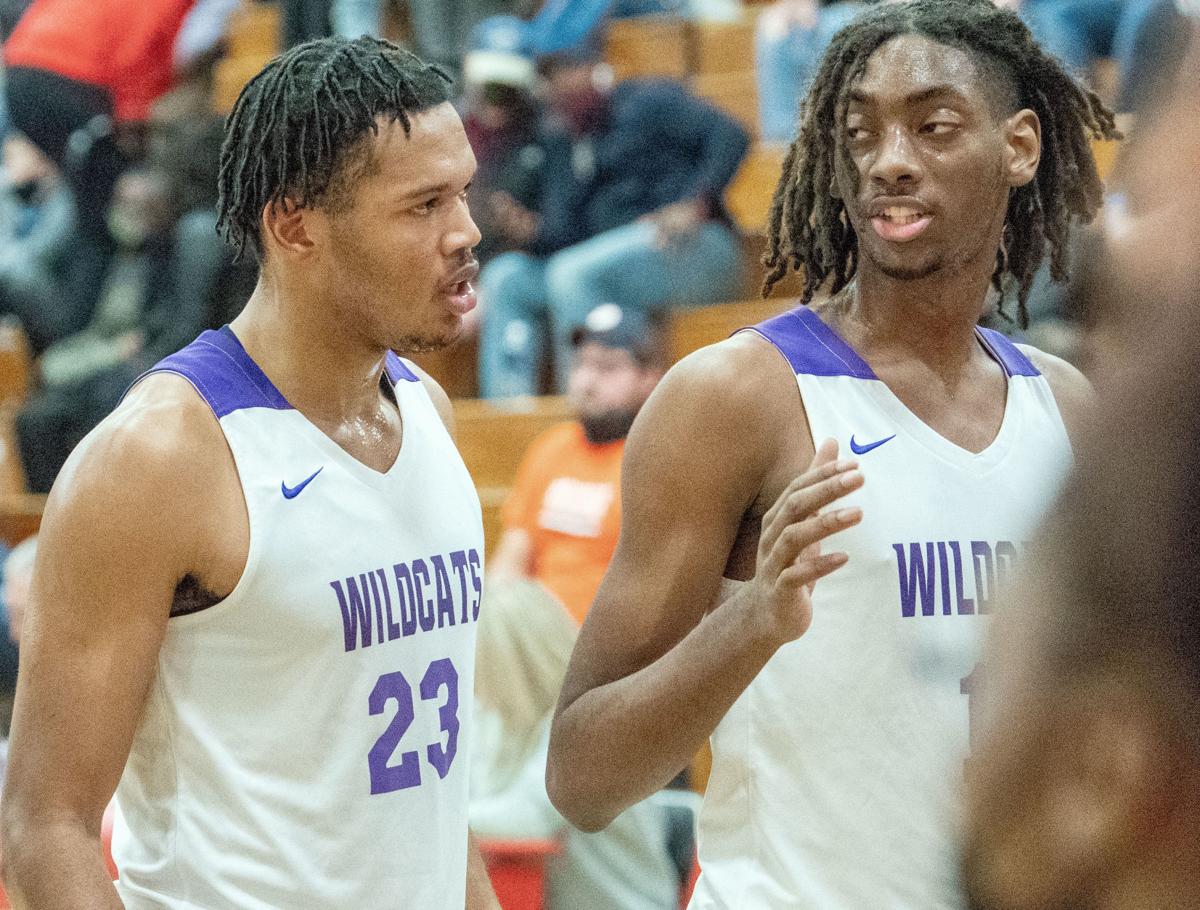 Thornton's Ty Rodgers (23) cheers for his teammates while on the bench vs. Decatur Eisenhower in a Decatur Turkey Tournament game at Stephen Decatur Middle School on Turesdfay, Nov. 23, 2021.

When Rodgers announced on Nov. 17, via social media, he had signed a National Letter of Intent with the Illinois men’s basketball program, just a few words accompanied a photo of the 6-foot-7, 210-pound wing flexing in an Illini jersey.

Though Rodgers presently is a senior for coach Tai Streets’ Thornton boys’ basketball program out of Harvey, he’s always sure to let people know where he comes from.

That was true after Rodgers and his new teammates on the Wildcats rolled past Decatur Eisenhower 81-34 in Thornton’s season opener on Nov. 23 at the Decatur Turkey Tournament.

“He loves his hometown,” said Streets, the former Michigan wide receiver and six-year NFL veteran who is the founder of the Meanstreets AAU team that Rodgers also plays for. “He knows where he’s from. He’ll never forget that. That’s where he learned the grit and all that type of stuff from. You never forget that as a competitor, where you come from.”

Rodgers racked up 21 points, nine rebounds and seven assists in his first game with Thornton, which followed three seasons spent playing for Grand Blanc (Mich.) about 45 minutes away from Saginaw.

That tenure included a 2021 Division I state championship victory with the Bobcats this past April.

How does this tie back to Rodgers’ roots? Because those aforementioned statistics don’t tell the whole story about Rodgers’ debut with his new high school team in Illinois.

While Rodgers helped elevate the Wildcats’ point total, he simultaneously kept Eisenhower from keeping pace by playing dogged defense. The guard/forward lived up to his four-star billing as a top-60 recruit in the country.

Streets utilized Rodgers both at point guard and in the post during the victory. This led to Rodgers hounding Eisenhower’s far smaller primary ball-handler into halfcourt turnovers as well as Rodgers stuffing the opponent’s bigger athletes in the paint.

“It’s just born in our blood,” Rodgers said of his defensive mentality. “That’s something we breathe ... not letting the person in front of you score on you.”

Rodgers credits some of this intensity to practicing with Saginaw’s Arthur Hill High School boys’ squad as a third-grader. He recalls going up against guys like Eric Davis Jr., a 2015 Arthur Hill graduate who went on to play at Texas.

“Just the grit, man, getting it from nothing. A lot of people take that for granted, especially kids that have stuff handed to them,” Rodgers said. “I’ve had to work for everything I’ve gotten.”

Rodgers is well aware how his defensive mindset will mesh with that of Illini coach Brad Underwood.

“Most definitely,” Rodgers said. “He likes dogs and that’s what I am, so it’s perfect.”

“He stayed on me,” Rodgers said, “... and I trusted him, and that’s a huge thing in the recruitment process.”

Rodgers is giving Illini fans plenty to be excited about early in his last prep season.

Following his effort against Eisenhower, he generated a triple-double versus Peoria Manual (14 points, 15 rebounds, 11 assists) and a double-double against Bolingbrook (12 points, 18 rebounds, eight assists) as the Wildcats finished the Decatur Turkey Tournament with a 2-1 record.

He was at it again on Friday night in a 65-46 win at Crete-Monee when he delivered 10 points, 13 rebounds and 10 assists. And he faced a possible future teammate at Illinois on Saturday when Thornton edged St. Rita 60-51 at the Chicago Elite Classic, with Rodgers delivering 12 points, 10 rebounds and five assists. St. Rita sophomore forward Morez Johnson, a Class of 2024 recruit, committed to the Illini last month.

Rodgers’ fast start to his lone season at Thornton isn’t a surprise to Streets. Who isn’t afraid to hype up the versatile wing.

Streets was impressed by Rodgers’ abilities well before the two began operating side by side together at Thornton, a school roughly 120 miles north of State Farm Center that has a rich tradition of basketball success. The Wildcats own two state titles in their history and enjoyed a dominant run in the mid-1990s that saw them advance to two straight state championship games.

But back to the present. And how Rodgers first got on the Wildcats’ radar. Thornton faced Grand Blanc on Jan. 5, 2019, in a game Rodgers and Grand Blanc won 62-53.

“That’s what their coach said. He said, ‘He’s big as hell,’” Streets said. “He’s a tough cover. And he works at it. That’s the thing about him. I just love his attitude. He does a little bit of everything for us. That’s what he is, a jack of all trades. ... He’s working his entire game, and it shows.”

And Rodgers points out that the Illini targeted him, at least in part, because of his on-court flexibility.

“They think I can play the 1 through 4,” Rodgers said. “Coach Underwood has told me multiple times that I’m going to be playing the 1 a lot just because of my vision and how versatile I am.”

One consideration was Rodgers being “tired of the whole (recruitment) process” and realizing that “Illinois was my home.”

Rodgers’ visit to State Farm Center on Nov. 12 for the Illini’s 92-53 win over Arkansas State certainly helped in the latter regard.

“I want to say 50-50,” Rodgers said when asked if he knew he’d soon sign with Illinois while attending that game. “It was electric in there, man. The Orange Krush, they were giving out, ‘We want Ty’ chants. That was huge for me. It was a great atmosphere, for sure. So I would say that sealed the deal.”

An apparent non-factor in Rodgers’ choice was his family ties to Michigan State. His uncle, Jason Richardson, starred for Tom Izzo’s Spartans in the early 2000s before going on to have a productive 13-year NBA career.

“No, not at all. We never had a conversation about anything like that,” Rodgers said. “It was just always, go wherever I feel wanted and where I can produce.”

How quickly Rodgers is able to hit the floor and produce for Illinois remains to be seen.

Even when he wasn’t actively participating in his Thornton debut, though, Rodgers kept himself busy along the Wildcats’ sideline.

Cheering on his teammates. Shouting out advice and encouragement. Discussing plays with assistant coaches and fellow players.

It’s an attitude that’s sure to translate well on Underwood’s roster.

Rodgers a fit for Illini