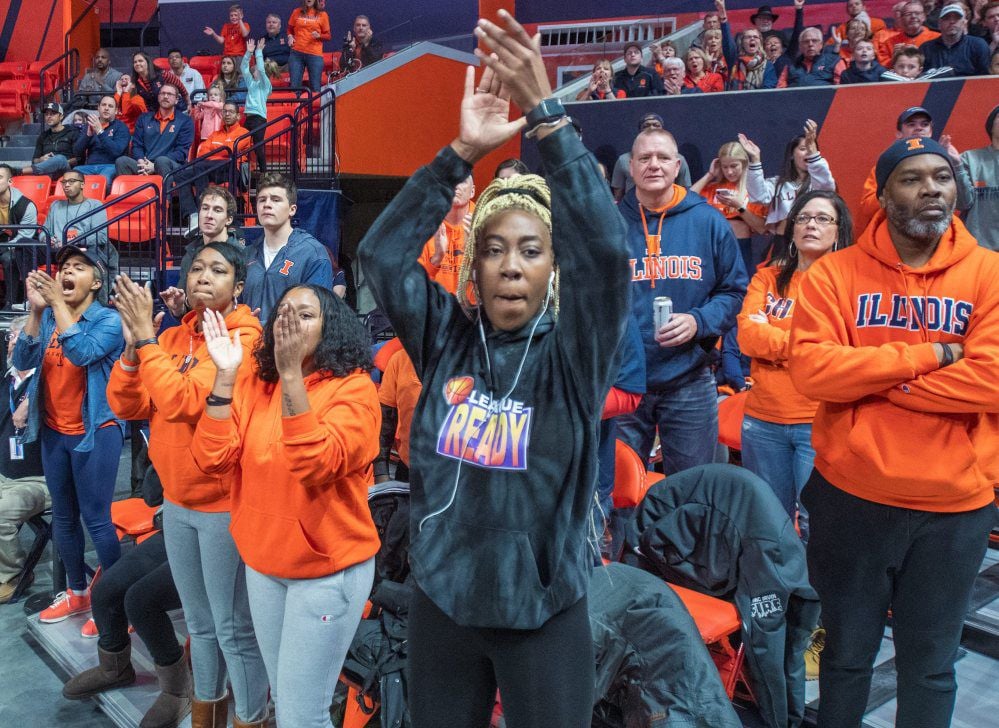 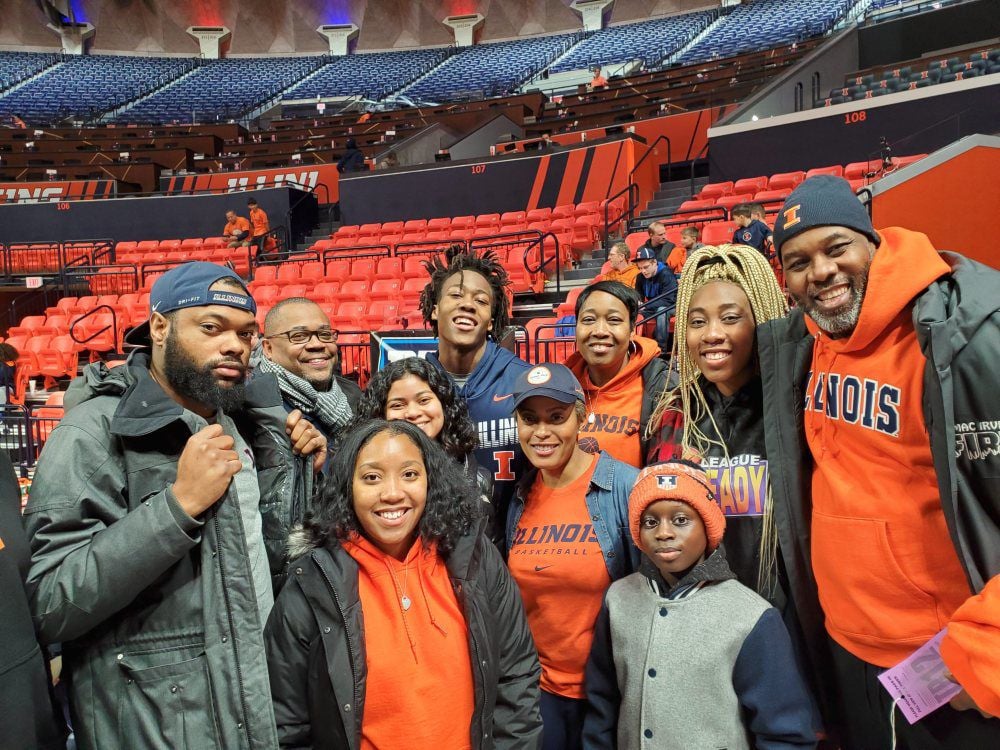 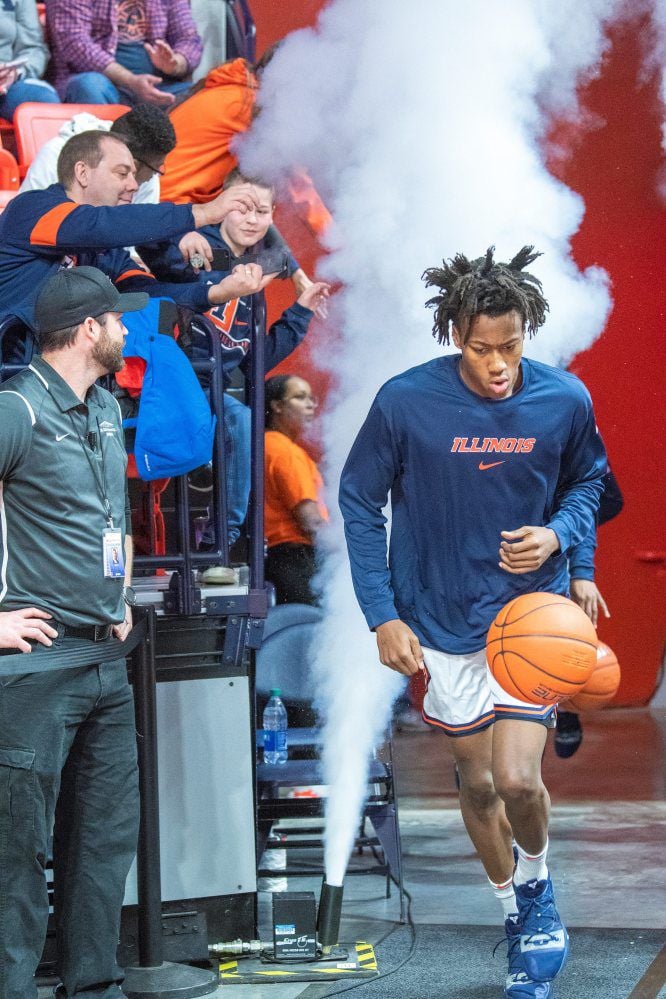 CHAMPAIGN — Early in the morning, Team Dosunmu piles into two cars in Chicago for the 125-mile drive south to Champaign.

It’s a route they know well.

But there isn’t a lot of basketball chatter on the trip down Interstate 57.

“We talk about other things,” Quam Dosunmu says. “Somebody else’s day, What’s going on in the world.”

Team Dosunmu arrives at State Farm Center an hour before the 11 a.m. tipoff against Rutgers this past Saturday morning.

For Saturday’s game, they are 12 strong. All there to support their favorite player: Illini star Ayo Dosunmu.

Team Dosunmu sits near the court, behind the Illinois bench. Wearing orange and blue. Naturally.

The immediate family includes dad Quam, mom Jamarra, older sisters Joselynn, 30, and Khadijat, 25, and older brother Kube, 21, who has to miss the Rutgers game because of work. They are joined by Ayo’s aunts, uncles and cousins.

“We are very close,” Quam says. “We do everything together.”

They attend every Illinois game, home and away.

It takes a commitment. One Team Dosunmu made long ago.

“We’ve been going to every game since he started playing, when he was 3,” Quam says. “Went to small fry games, went to every AAU game, went to every high school game.”

“He knows we’re here,” Jamarra says. “He knows exactly where we are no matter what arena we’re in.”

Before the game starts, Quam catches Ayo’s attention. For a moment.

“It’s just acknowledging, just a look,” Quam says. “I look into his eyes, he looks into my eyes. Just for that one second, two seconds. I might give a little gesture like, ‘We’re good.’”

Going to every game can make life hectic for Team Dosunmu. They have jobs and school (Kube is finishing his sports management degree at Illinois-Springfield).

Jamarra is a hairstylist who runs her own business.

“We just figure it out and everything meshes together,” Jamarra says. “It’s a lot of fun.”

Helpful of Ayo to pick a college so close to home.

Quam stands the entire game. Wearing an orange hooded sweatshirt and blue Illinois stocking cap, he is the picture of intense restraint.

During the game, Ayo is all business.

“He’s focusing on what he has to do,” Quam says.

With his arms folded across his chest, Quam doesn’t say much.

After one wayward Illini pass, Quam slaps his hands in an “oh-no” kind of way.

“I don’t know where he gets it from,” Jamarra says. “Ayo has always been very calm. He doesn’t get rattled. He’s always been that way, even as a baby.”

As Ayo walks off the court at halftime or after the final buzzer, he can glance up at Team Dosunmu.

Quam can’t imagine not being at the games.

His son wants him there. Wants the family there.

Quam made a career change so he could get to all the games. After 30 years working for UPS, he left to become an educator.

“Sometimes as a parent, you have to sacrifice for your child,” Quam says. “This was his dream, his passion. And it was ours. It was my job and his mom’s job and the family’s job to help him achieve that.”

Thanks to Ayo’s 18 points and seven rebounds, the Illini beat the Scarlet Knights 54-51 for their 12th win of the season.

Twenty minutes after the final buzzer, Team Dosunmu stays in their seats. Waiting for No. 11 to complete his postgame duties.

“We are always the last ones to leave,” Quam says.

Illinois coach Brad Underwood stops by to see Team Dosunmu. They are fans of the third-year coach.

“I like Coach Underwood,” Quam says. “I call him Big Wood and I call his son (Tyler) Little Wood. He reminds me of myself. Hard-nosed, hard-working. We’re all family guys. He’s a teacher, he’s father, he’s a mentor, he’s a motivator. He’s preparing them for the next level.”

Soon, Ayo visits with his family. Normally, the group will go to a local restaurant for a quick dinner. Portillo’s is a family favorite. But Quam is an assistant at Ayo’s former high school, Morgan Park, and has to zip back to Chicago for another game.

Not every game ends with a victory. That’s when Team Dosunmu is at its best.

Quam watches the game in person first. Then goes home and watches it again on tape.

“Then, I’m able to look at little things,” Quam says. “We’ll have a conversation the next day about what I saw, what I think he needs to do.”

“He’s progressing well,” Quam says. “I always tell him, ‘This is a marathon, not a sprint.’ We’re always improving on where we are now.”

“We think that they don’t listen to us,” Quam says. “I might tell him something and think that he’s not listening. Then three days later, four days later, what I told him, he does it. Then I’m like, ‘Geez, he was listening.’”

Ayo came up big in a Jan. 8 game at Wisconsin. He sank a clutch three-pointer as the Illini beat the Badgers 71-70 to end a 15-game losing streak against Wisconsin.

Team Dosumnu was cheering the loudest at the Kohl Center in Madison, Wis.

“It feels good because I know the work that he puts in,” Quam says. “I know the countless hours he works on his shot, different moves, the scenario.

“All of that was set up from the previous four plays. He learns from his mistakes.”

When Ayo fired the winning shot, Quam knew it was going in.

“Yes,” he says. “He had that special bounce in him that particular day.”

“These are guys that won state championships in high school,” Quam says. “So losing was very tough and hard for them. Makes you mad. Makes you hungry. Makes you more determined.”

Ayo’s Illinois clock is ticking. Leaving after his sophomore season to pursue his NBA dreams is a possibility.

When he moves to the next level, Team Dosunmu will follow.

“Wherever that is,” Quam says.

When the Illini schedule was released this past summer, Team Dosunmu starts planning.

“Everything is always mapped out,” Quam says. “We know where we’re going, when we’re going.”

Already, Team Dosunmu has been to Arizona, Maryland, Michigan State and Wisconsin in the past two months, with upcoming trips to Michigan, Iowa, Rutgers, Penn State and Ohio State.

Team Dosunmu is counting on a trip to the NCAA tournament. Site to be determined on Selection Sunday.

Not all the trips have been easy for Team Dosunmu. In Ayo’s freshman year, the family ran into snow on the way to Nebraska. Lots and lots of snow.

They made it. And drove back home the next day.

“The weather doesn’t stop us,” Quam says. “We’ll get there.”

Illini fend off Wildcats for 75-71 win

Episode 82: How Illinois made its way back into the Top 25

There are 65 voters nationwide who determine the AP Top 25 men's basketball poll, including The News-Gazette's Scott Richey. In his weekly po…