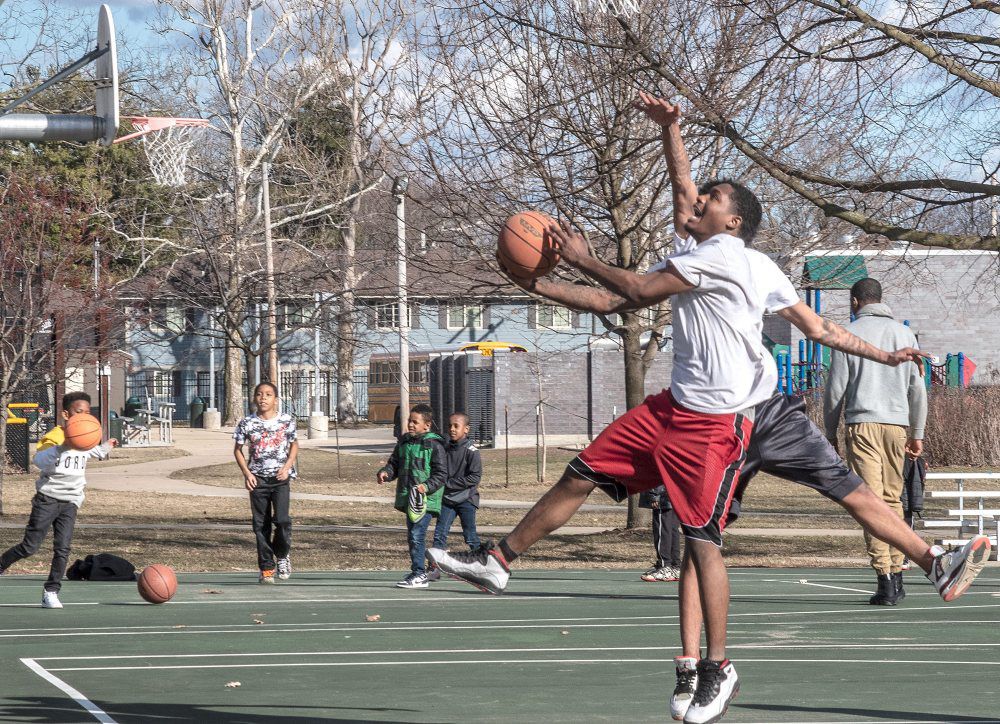 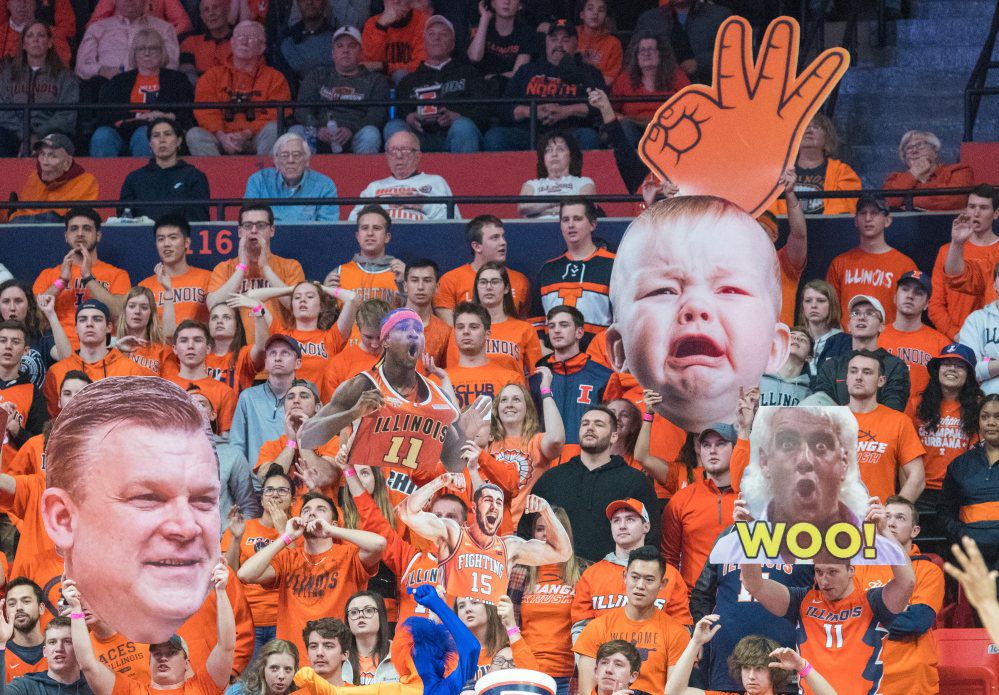 The Orange Krush's poster game was on point during the Illinois-Minnesota game on Thursday, Jan. 30, 2020, at State Farm Center in Champaign. 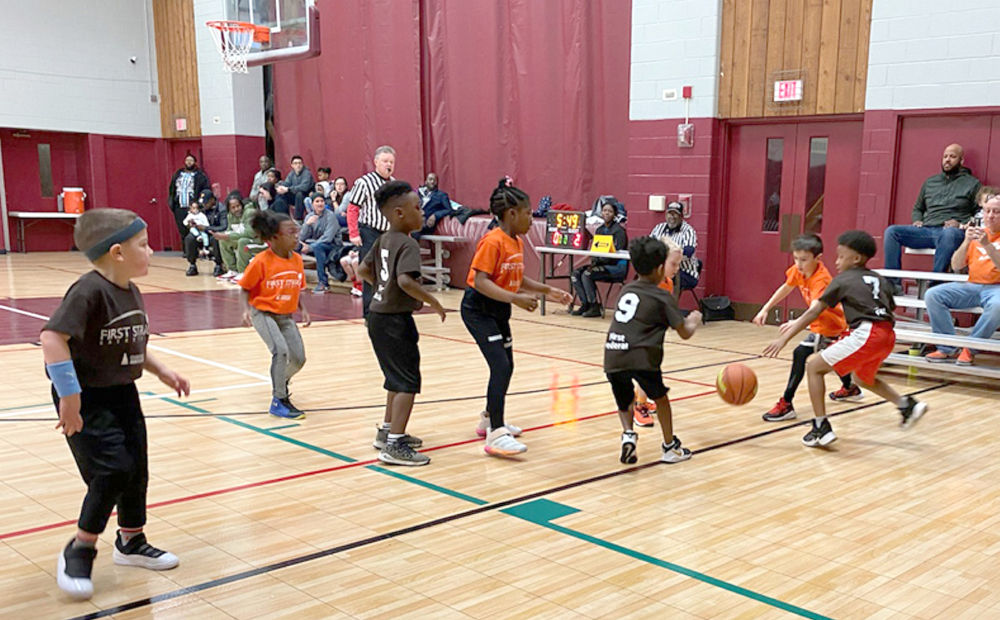 The basketball youth league was bustling Saturday, Feb. 29, 2020, at the Douglass Community Center in Champaign. 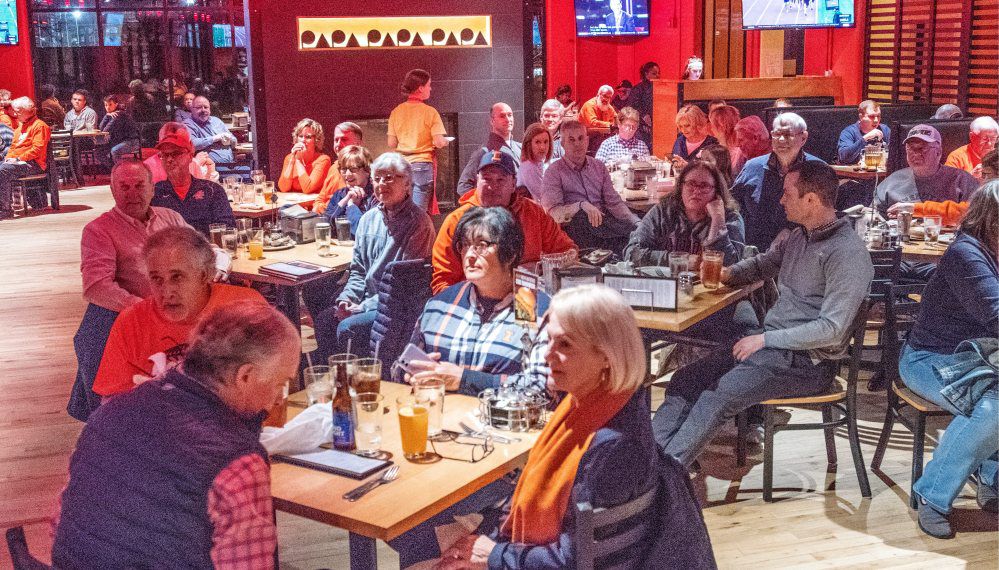 The Orange Krush's poster game was on point during the Illinois-Minnesota game on Thursday, Jan. 30, 2020, at State Farm Center in Champaign.

The basketball youth league was bustling Saturday, Feb. 29, 2020, at the Douglass Community Center in Champaign.

CHAMPAIGN — Coach Brad Underwood circulated the room at Papa Del’s before his radio show on Monday, a day after his Illinois men’s basketball team beat Indiana in an electric State Farm Center atmosphere, and came to a stop at the table of 32-year season ticket holder Campbell Smith.

“It was pretty good, wasn’t it?” Underwood said. “Yesterday was off the charts. That was fun.”

It’s been like that all over the area lately, on campus and off — from the basketball courts of Douglass Park to middle school gyms big (Champaign’s Edison) and small (Prairieview-Ogden) to the buzz in the air over the possibility of C-U winning back the IHSA boys’ basketball finals.

A basketball renaissance — the kind of which we haven’t seen in awhile — has taken hold.

“We’ve had season tickets since ’88,” Smith said. “Lou Henson lived about two blocks away from us. It was upsetting for awhile when it wasn’t that way, and now we’re back.”

“The best thing about this is, you have great memories from that time,” Underwood said. “That’s the fun part about that now. ‘Hey, remember when we played Indiana? Or whatever.’ And that’s what’s fun to see about college athletics.”

For the previous six years, those memories were few and far between. Illinois hasn’t made the NCAA tournament since 2013. The Illini finished with losing records in three out of the last four seasons, something that happened just three times in the previous 37 seasons.

When John and Fay Drews retired to Champaign in 2006, State Farm Center, then called the Assembly Hall, was the place to be.

The Illini were coming off of their best season of all-time in 2004-05, and the atmosphere in the arena was electric.

After a few years, they were able to nab season tickets. They grew a relationship with the people who sat around them.

Then, State Farm Center was renovated, and they were forced to sit in new seats during the 2016-17 season. Not enough people consistently came to games for them to get to know the fans in their sections.

This season, though, the electricity has returned. The Illini are in position to comfortably make the NCAA tournament. Underwood signed an extension Monday and said he never plans on leaving. The fans are back, and they’re excited.

“It was like a library in there for awhile.”

Of course, the six-year stretch without a tournament appearance wasn’t the first dark period in Illinois basketball. The last time Illinois wasn’t a shoo-in for the tournament on a consistent basis, Illinois play-by-play radio broadcaster Brian Barnhart was a kid in Tolono in the 1970s, when Lou Henson took over a program that hadn’t made the postseason since 1963.

In 1980, the Illini made the NIT, giving way to three decades of success.

“It was in those early-’80s years that you started seeing the same kind of momentum and optimism that you’re seeing now. Because we had not seen that in awhile.”

Barnhart and his fellow Illini fans got used to the year-after-year success, planning their calendars around NCAA berths each spring. During the last decade, though, that changed.

The Illini pulled off a few big wins here and there, including an upset of No. 9 Michigan State last year that sent the crowd into a frenzy. The difference this year, to 36-year season-ticket holder Mike Zopf, is that fans go into big games with confidence.

“Now, we expect to win,” Zopf said. “And nobody remembers what that feels like.”

Excitement is back at State Farm Center, and it might soon extend beyond the Illini. The venue put in a bid to host the IHSA state tournament for the first time since its 77-year run as host ended in 1996.

Even if the state tournament doesn’t return, young fans are now able to connect to basketball in Champaign in ways they couldn’t for the last six years.

And by doing so, they may be creating a whole new generation of Illini faithful.

“What’s exciting for me is that younger fans come up to me and say this season has been the most unbelievable season they can remember,” Barnhart said. “And I’m thinking, ‘Well, it is exciting, but it used to be like this all the time.’

“I’m just happy for them that they’re getting to experience the moments that Ayo Dosunmu has given us this year, the game-winning shots, the excitement building as you contend for a title, and every game, how much it means.

“For a whole new generation of fans, for those of us that go back, we remember the Flyin’ Illini, a certain generation, and you have another generation that remembers ’04-05. And then we’ll see how far this team goes, but they’ve created a bond between this current generation and this team.

“And hopefully, they can build on it and it can last even longer.”