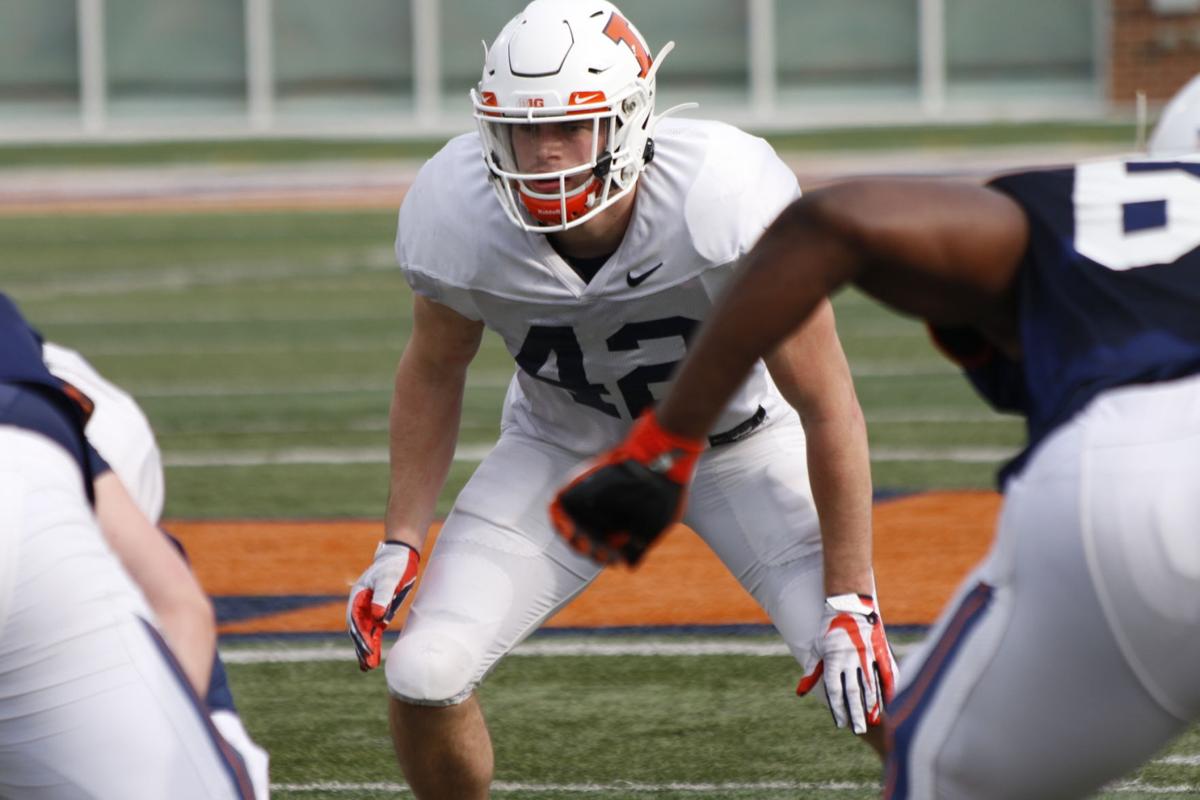 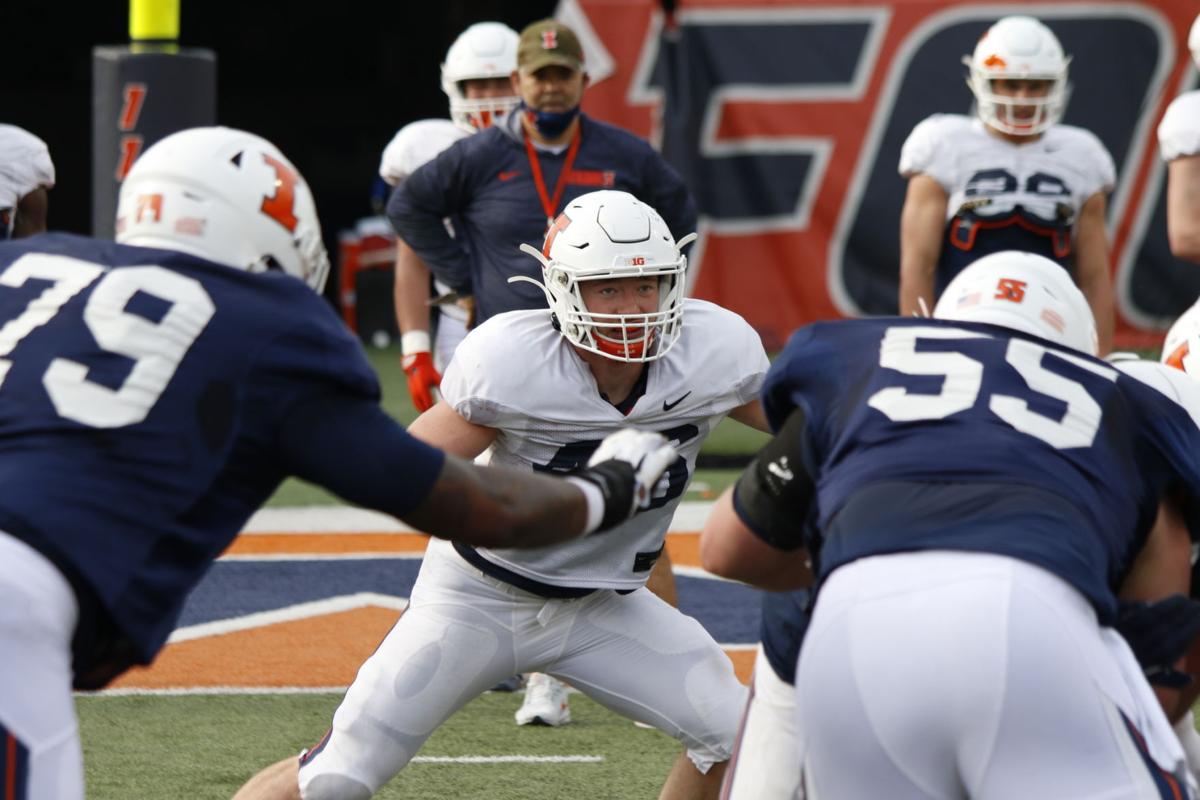 Illinois linebacker Alec McEachern runs a play during last Tuesday’s spring practice inside Memorial Stadium. McEachern was one of four walk-ons to be put on scholarship after the practice, joining Michael Marchese, Tailon Leitzsey and Christian Bobak. 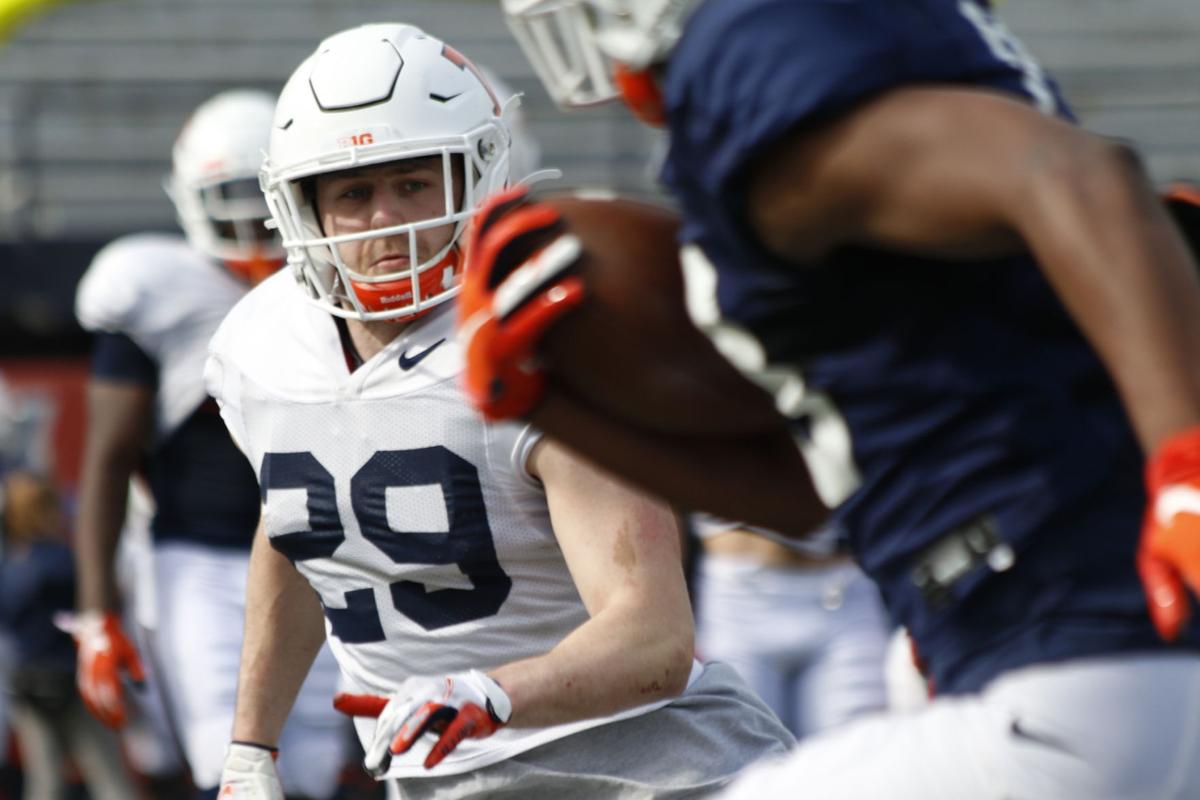 Illinois linebacker Alec McEachern runs a play during last Tuesday’s spring practice inside Memorial Stadium. McEachern was one of four walk-ons to be put on scholarship after the practice, joining Michael Marchese, Tailon Leitzsey and Christian Bobak.

CHAMPAIGN — Tailon Leitzsey’s story is the most eye-catching of the four Illinois football players who were placed on scholarship following last Tuesday’s practice.

Barely played high school football. Worked two jobs before traveling from South Carolina to Champaign-Urbana without any assurances he’d play football for the Illini. Slept in his car for eight days while trying to make the team.

That made the senior defensive back a clear standout during the ensuing Zoom conference calls with all four former walk-ons.

And they were plenty emotional once they realized what they’d achieved.

“Hard to describe. Pretty surreal,” the senior Marchese said. “Just having that moment with my teammates was pretty amazing.”

“We just walked in and thought it was a normal team meeting, and then all the sudden we saw the camera come in,” added the junior McEachern, referencing the technology that led to the scholarship moment being shared via Twitter. “I couldn’t feel my legs. I was in shock.”

“(Coach Bret Bielema) usually has tape for everything he’s showing us, so I was a little bit skeptical of what he was doing,” the senior Bobak said of the post-practice gathering. “It was one of the best moments I’ve ever had in my life.”

Marchese and McEachern live together along with seven other Illinois football athletes. That led to a raucous scene once they returned home Tuesday.

“Our friends over across the street, they were having something, so it was like the block party pulled up,” McEachern said. “They were honking their (car) horns, music playing. I was like, ‘Did you guys plan this? Did Coach tell you what was going on?’”

Bobak had the added benefit of immediately celebrating with brother Matt, an Illini redshirt freshman running back.

“My brother was one of the first people to come up and give me a hug,” Christian Bobak said. “We were both super emotional.”

Marchese had a different experience with sibling Henry, an Iowa football athlete.

“I actually tried to call my twin brother first, just to let him know the news,” Michael Marchese said, “but he didn’t pick up — per usual.”

Marchese already was adjusting to a new feeling prior to being put on scholarship.

Tuesday’s spring practice marked the first for Marchese as an Illinois tight end.

“(Bielema) told me as a proposal — I didn’t have to do it — and then he gave me his reasons why, and I was like, ‘Sure, why not?’” Marchese said. “I just plan on getting better every day.”

McEachern and Bobak are in-state products, having graduated from Benet Academy and Hinsdale Central, respectively.

So both were willing to offer thoughts about the in-state recruiting push Bielema and his staff have undertaken.

“Seeing other people in the state getting the same opportunity I did — the opportunity to prove themselves for their home school — it’s really exciting,” McEachern said. “A guy from my hometown’s coming here, as well (Class of 2021 signee Zachary Barlev out of Plainfield East), so that’s really cool.”

“Coach B’s put a really big emphasis on (in-state recruiting), obviously,” Bobak added. “I ended up passing up on some smaller FCS offers to come walk on here, and I’m really glad I did because the experience you get here, you can’t get that anywhere else.”

That’s especially true at linebacker. Jake Hansen isn’t participating after being a late roster re-addition following his departure from the NFL draft pool, while Tarique Barnes, Khalan Tolson and Shammond Cooper are recovering from offseason surgeries.

The coordinator Walters named McEachern, North Carolina State transfer C.J. Hart, junior Sean Coghlan and redshirt freshman Isaac Darkangelo as some of the linebackers who have stood out.

“I’ve been pleased with that group, regardless of how thin it might be,” Walters said during a Friday Zoom call. “Those guys are doing a really good job of being physical and playing downhill, but also understanding the scheme and understanding what we’re trying to get from them.”

Aaron Henry’s position group is one part of the defense that has more healthy key returnees than not.

“Tony has been having an incredible spring football so far. I like his state of mind,” Henry said. “From the time practice is over to the time I leave this building, he’s, ‘Coach, how can I get better? Coach, what do I gotta do to make it to the NFL?’

“Kendall is long, athletic, plenty of ability. This being Kendall’s senior year, I think he has the chance to be very special, as well.”