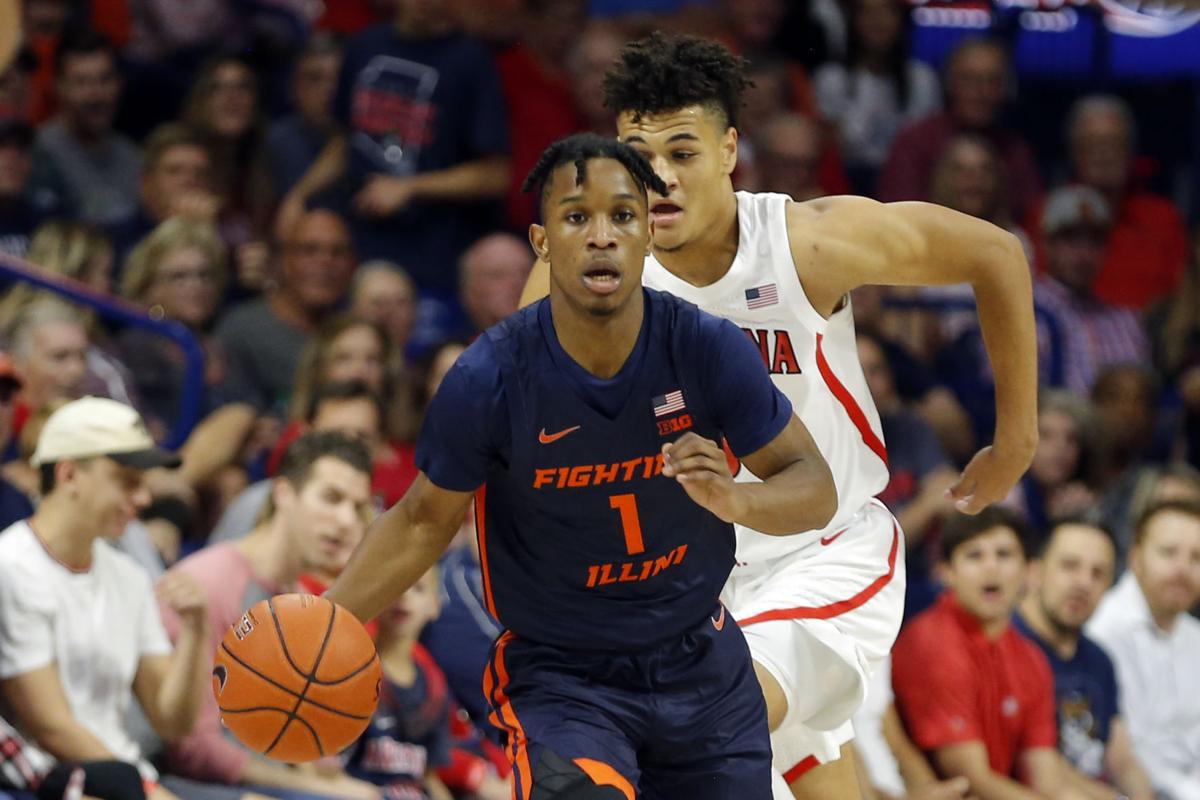 Illinois guard Trent Frazier brings the ball up against Arizona in the first half of Sunday night's game in Tucson, Ariz. 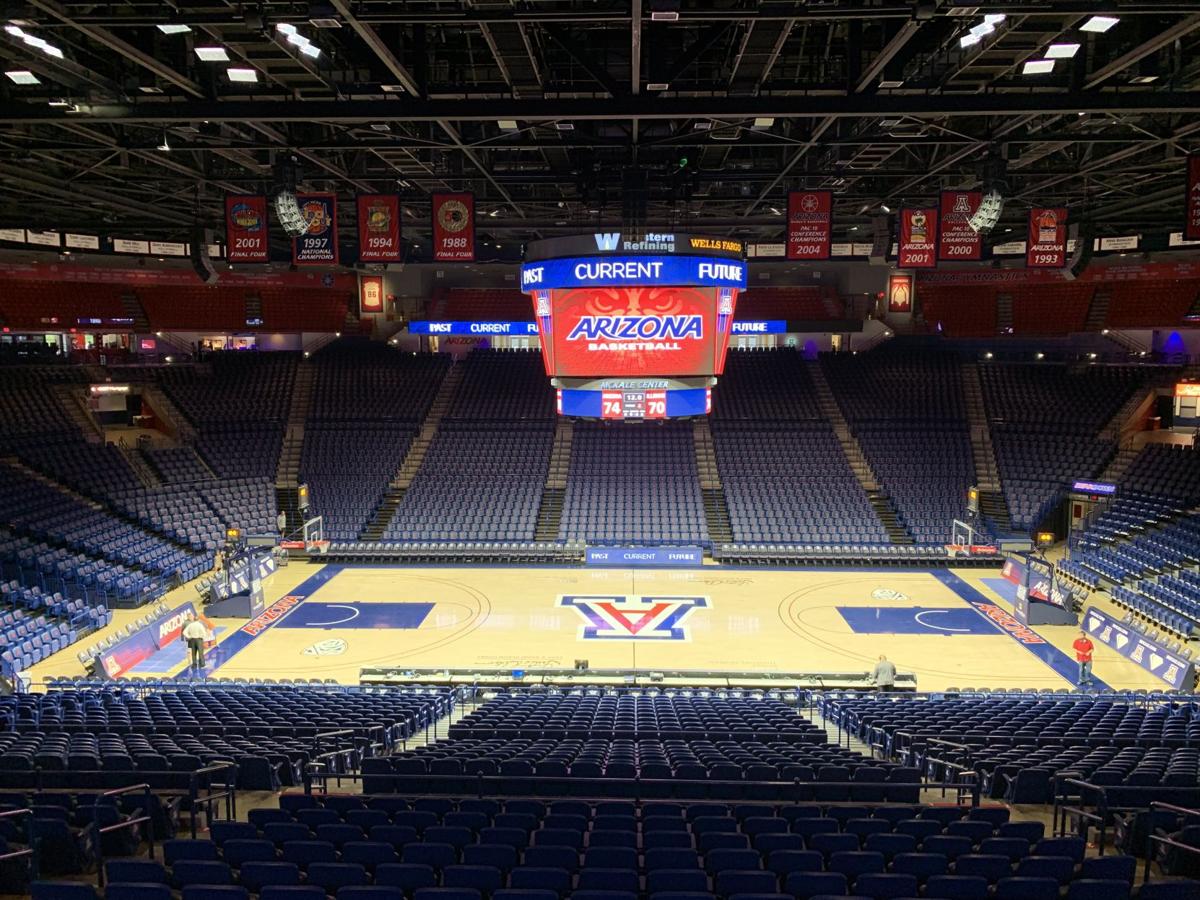 Illinois guard Trent Frazier brings the ball up against Arizona in the first half of Sunday night's game in Tucson, Ariz.

Stay right here at IlliniHQ.com for continual updates throughout tonight's game. Then make sure you stick around after the game for some exhaustive coverage. I'm going to be emptying the notebook, as they say.

A few pregame observations from the McKale Center in Tucson ...

— Arizona has some big dudes. That starts with Zeke Nnaji and Chase Jeter, but there's some depth, too. More big guys than the first two teams Illinois played combined.

— Illinois men's golf coach Mike Small is here. So is Illini athletic director Josh Whitman and his wife, Hope. They were in Phoenix on Friday and East Lansing, Mich., on Saturday. Do you get frequent flyer miles on charter flights?

— Arizona has a cool arena. Lots of seats close to the action. Can't say it's the same vibe as Friday night, though. Nothing can probably match what the Grand Canyon students do.

— In terms of a basketball-specific observation before the game, Illinois has to really limit turnovers better than it has the first two games. Arizona will make the Illini pay for them more than Nicholls State or Grand Canyon did. Simply more talent.

Illinois' Friday-Sunday schedule has a certain feel to it. Like a schedule the Illini might face in mid-March.

"This is an NCAA tournament type setting," Illinois coach Brad Underwood said. "We play a game, granted we’ve got to get on a bus and go a couple hours, and then it’s the next opponent. Arizona's been one of the elite programs for the last 30 years in college basketball."

Headed to the court for warmups. #Illini pic.twitter.com/ljZKlIKwsO

The way Illinois regularly prepares for games meant the short turnaround, while challenging, won't be insurmountable.

"Same approach that we use for every team," sophomore guard Alan Griffin said. "Coach always says no matter who we play, they’re faceless and nameless. We come out with the same approach."

The toughest test — at least at this point of the season — happens tonight against No. 21 Arizona. The Wildcats cruised in their season-opening win against Northern Arizona on Wednesday. They've had the rest. No game since.

Illinois got the short turnaround with the Friday-Sunday combo. Preparation for tonight's game, in fact, started almost immediately after dispatching Grand Canyon.

"When we go back to the hotel we’ll already start prepping for the next game," sophomore forward Giorgi Bezhanishvili said late Friday night. "We didn’t just come on this trip to win one game. We came to win two. We’ll prep tonight, prep tomorrow and hopefully get another win on Sunday."

Going 2-0 on this early road trip won't be easy. The Wildcats are ranked. They have a projected lottery pick in their backcourt in freshman guard Nico Mannion. Fellow freshman Zeke Nnaji — a rangy 6-foot-11 forward and one-time Illini recruiting target — dropped 20 points in Arizona's win against NAU. Then there's a third freshman in 6-6 guard and five-star recruit Jalen Green. Not to mention guys like Chase Jeter and Jemarl Baker.

Talent abounds in the desert.

The matchup to watch, of course, is Illinois guard Ayo Dosunmu squaring off against Mannion. Even if he'll probably draw Green more defensively given the size comparison. The thing is, Illini coach Brad Underwood will probably throw Andres Feliz, Trent Frazier and Dosunmu at Mannion.

But potential first round draft picks going head-to-head should be fun. And telling. Both about where Dosunmu stacks up against a guy that's been plugged into the 2020 lottery since he was probably a junior in high school (if not earlier) and where an Illinois team with high expectations stacks up against a national elite.

Illinois will look to move to 3-0 tonight at Arizona.

Good Morning, Illini Nation: A look back at one of the Illini's greatest days

With Illinois taking on Arizona tonight, we revisit the hard-to-believe comeback in 2005 that sent Bruce Weber's team to the Final Four.