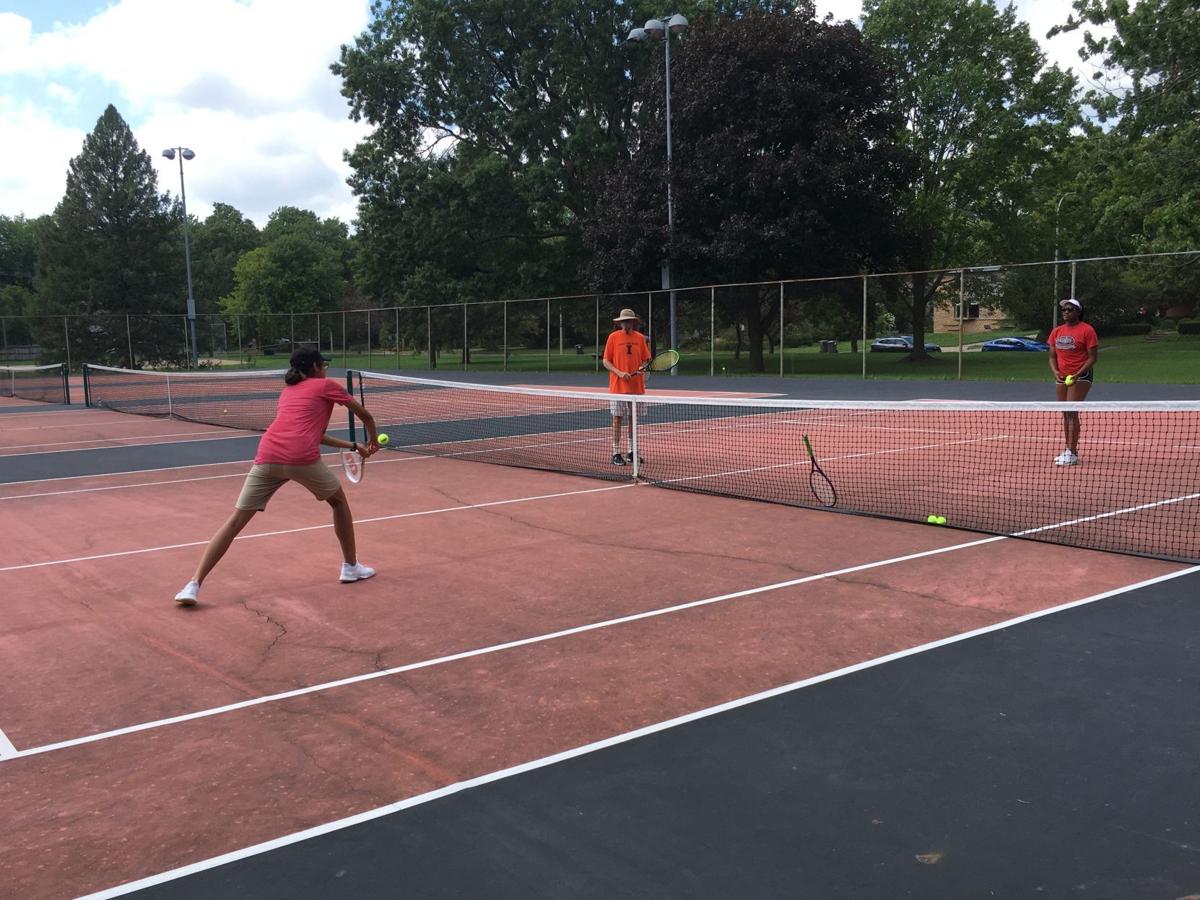 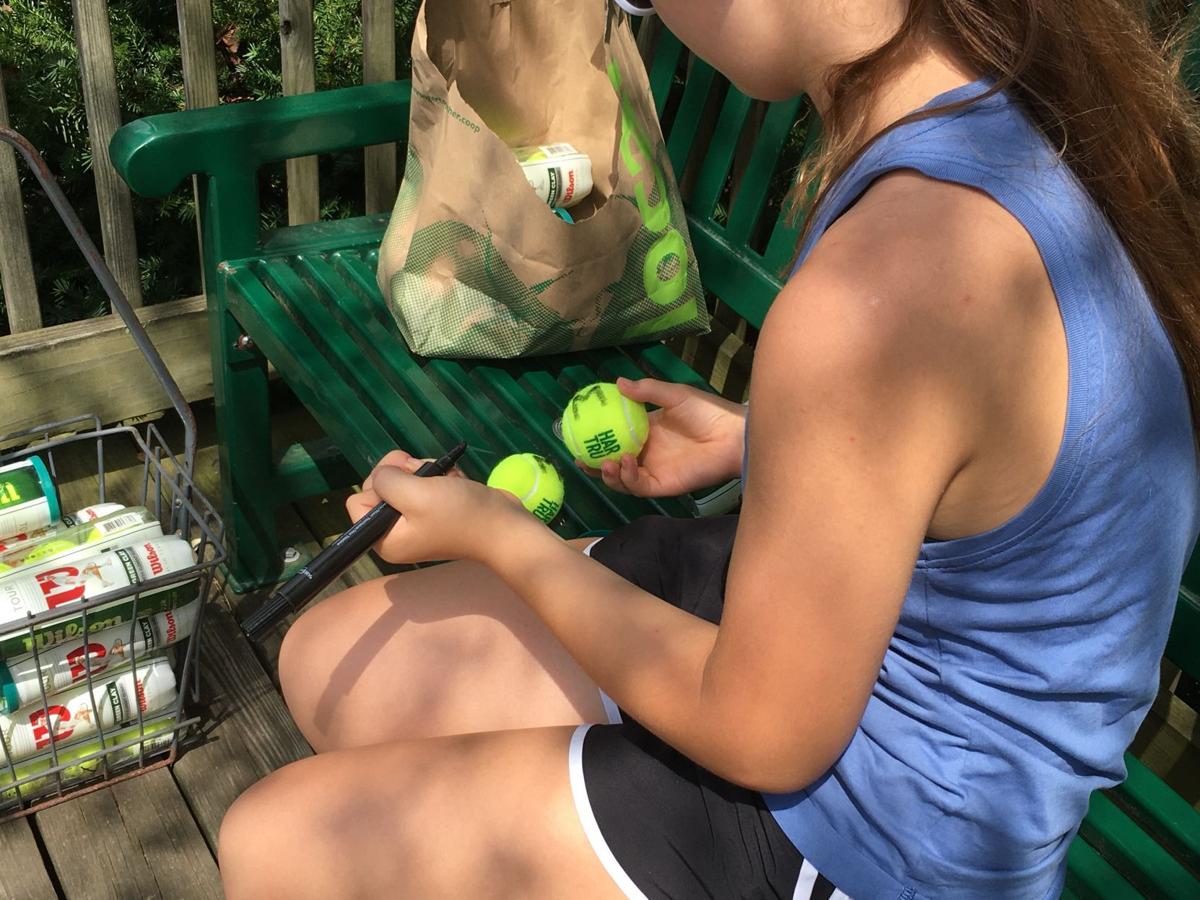 Urbana girls’ tennis players Devangana Rana, left, and Eisla Madigan volley at Monday afternoon’s practice at Blair Park in Urbana. Each player had their own set of tennis balls to use in response to the COVID-19 pandemic. 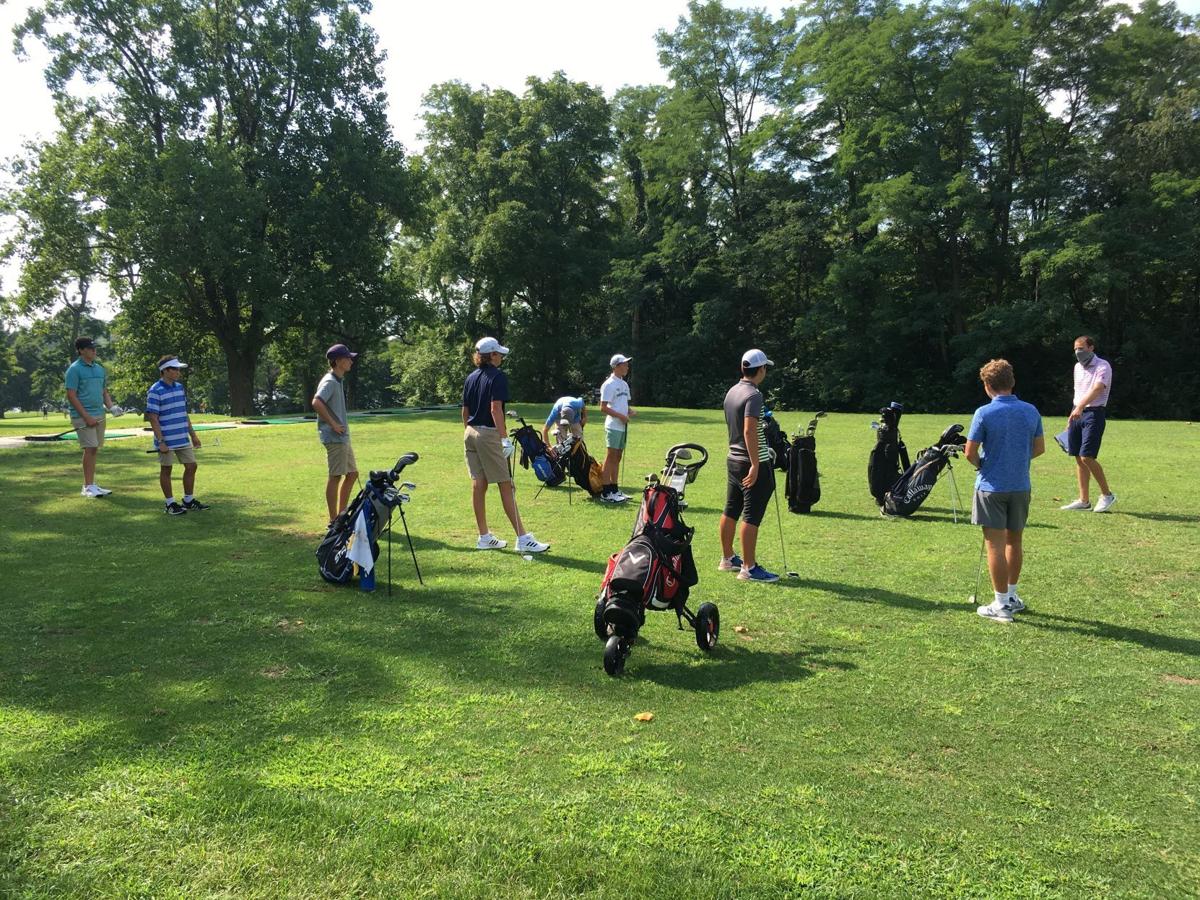 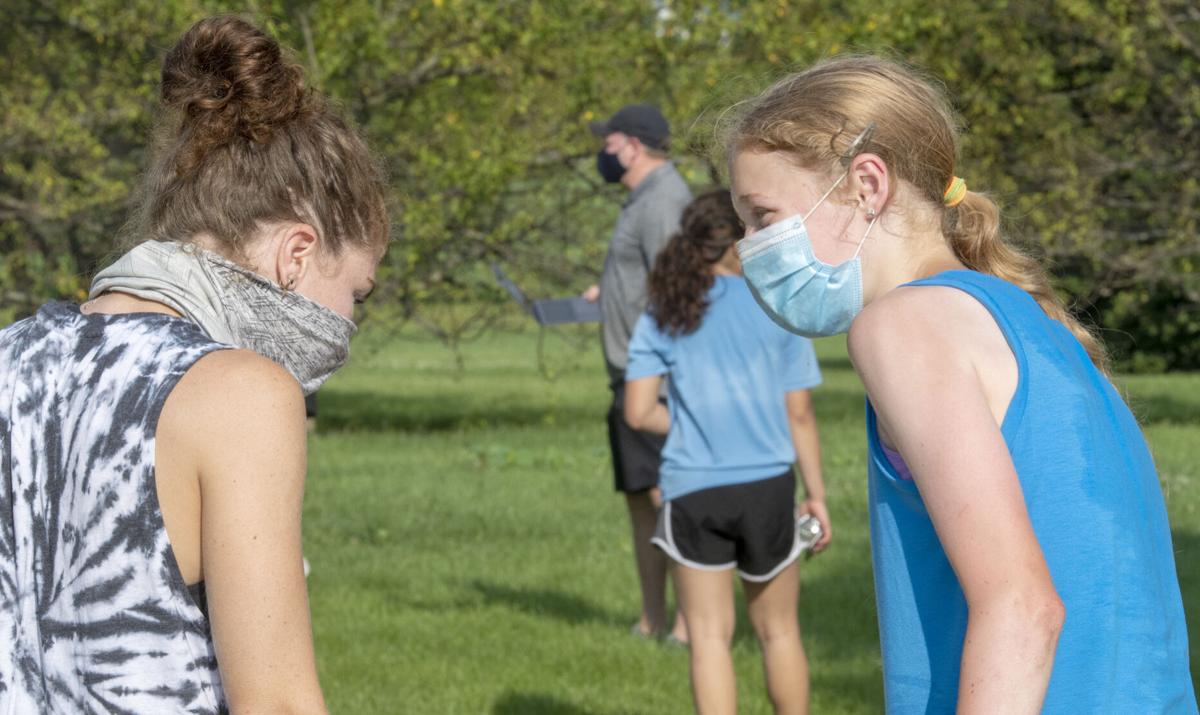 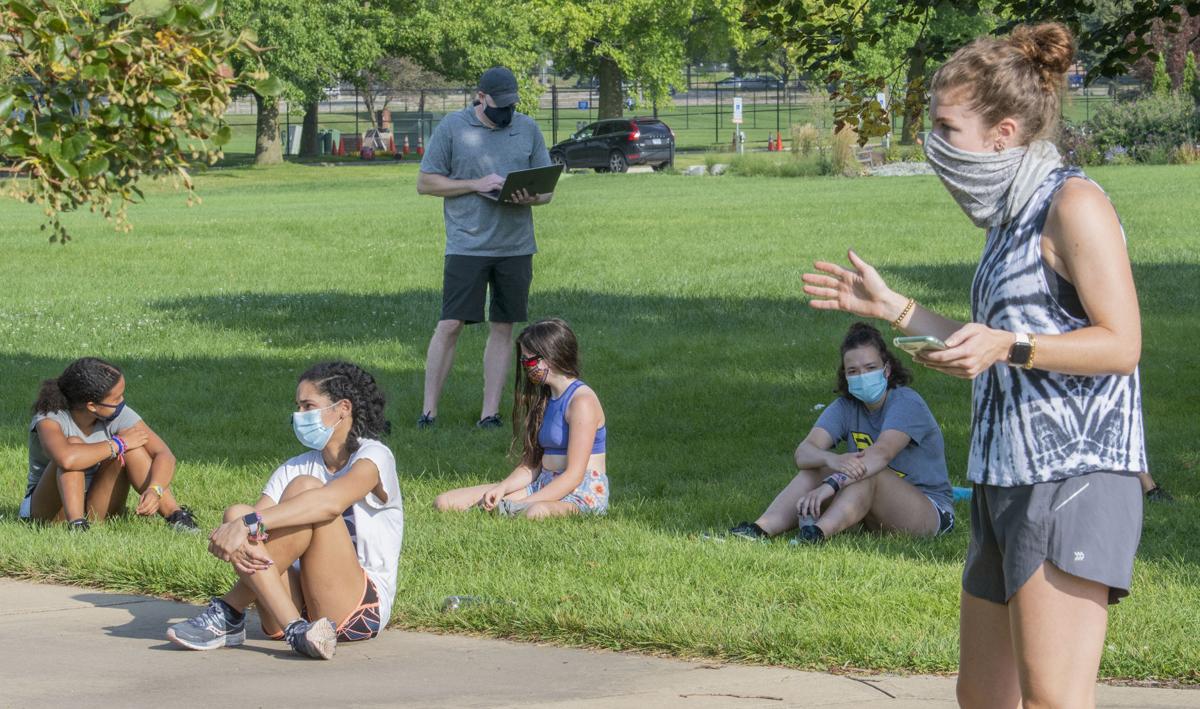 First-year Uni High cross-country coach Rachael Brewer talks to her athletes on Monday at the UI Arboretum. ahead of practice.

Champaign Central girls’ swimmers work out at the Unit 4 pool on Monday at Centennial, the first day of official practices for fall sports teams across the state.

Players warm up before he start of Mahomet-Seymour High School boy's golf tryouts at Lake of the Woods golf coarse in Mahomet on Monday, August 10, 2020. 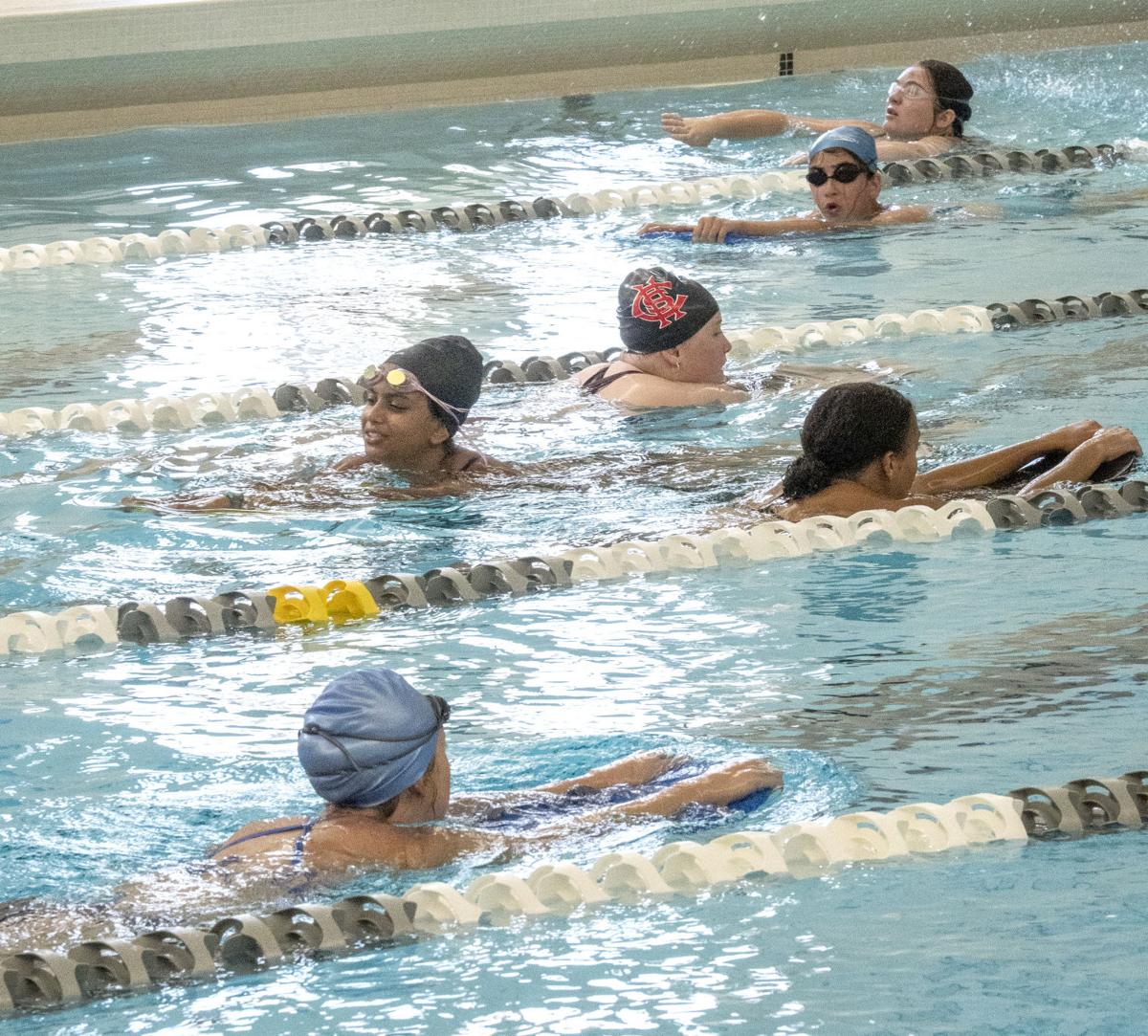 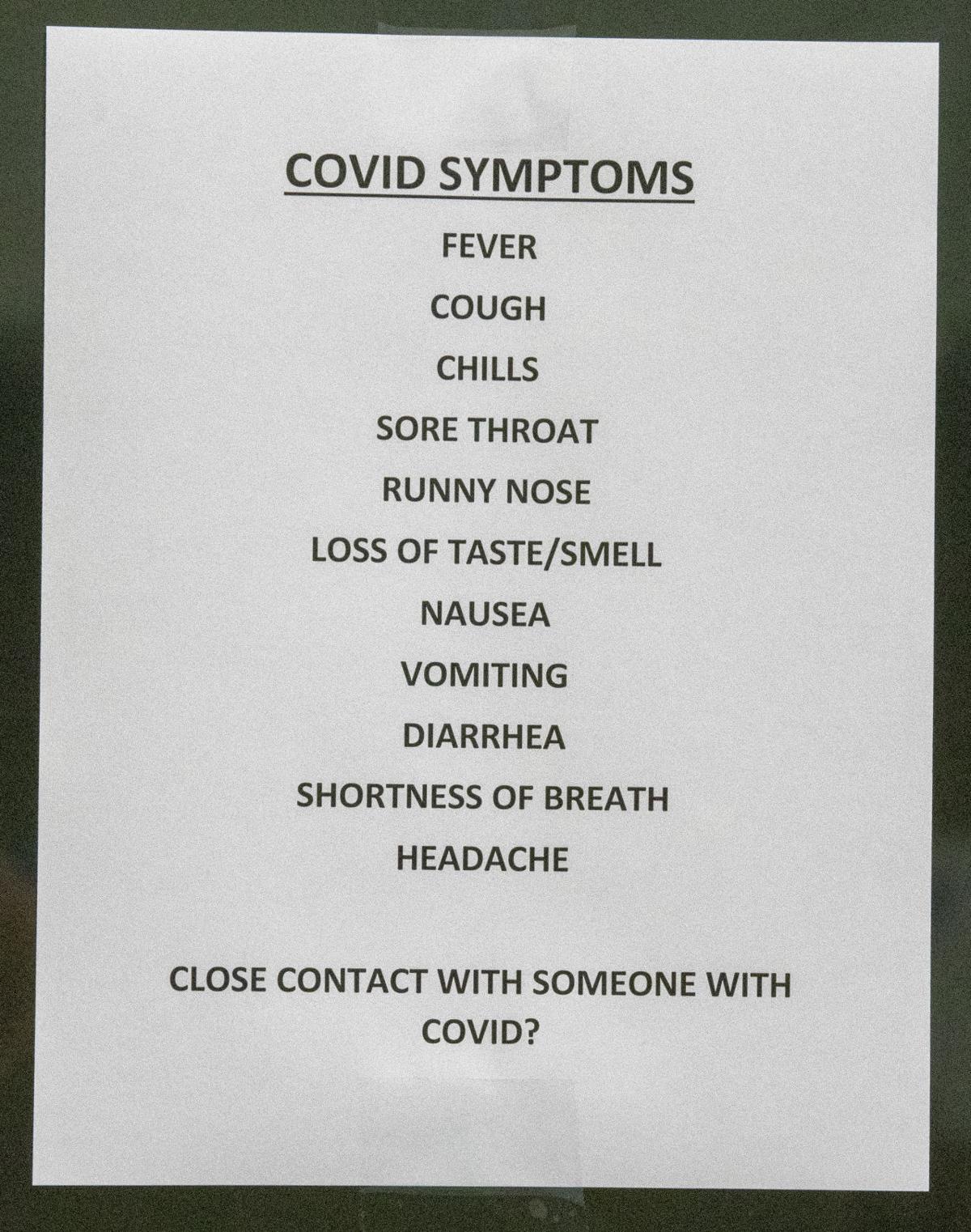 Urbana girls’ tennis players Devangana Rana, left, and Eisla Madigan volley at Monday afternoon’s practice at Blair Park in Urbana. Each player had their own set of tennis balls to use in response to the COVID-19 pandemic.

First-year Uni High cross-country coach Rachael Brewer talks to her athletes on Monday at the UI Arboretum. ahead of practice.

Champaign Central girls’ swimmers work out at the Unit 4 pool on Monday at Centennial, the first day of official practices for fall sports teams across the state.

Players warm up before he start of Mahomet-Seymour High School boy's golf tryouts at Lake of the Woods golf coarse in Mahomet on Monday, August 10, 2020.

Rachael Brewer and Dean Kamps insisted they weren’t trying to annoy or frustrate their Uni High cross-country athletes at Monday’s first practice of the 2020 season.

Instead, everything Brewer, the Illineks’ first-year coach and Kamps, an assistant coach with the program, were saying about COVID-19 pandemic-related precautions during a workout at the University of Illinois Arboretum was espoused “to encourage them to be as safe as possible while attending practices.”

“I don’t want it to get taken away from us,” Brewer said, “and I hope to just keep encouraging them by sharing why we have to do this and how important it is if other people see us — that they say, ‘Wow, Uni High was social distanced. ... I’m impressed with what they’re doing.’”

A combination of welcoming back and safety guidance was the order of the day for local cross-country, golf, girls’ tennis and girls’ swimming and diving coaches Monday, the first day of the new IHSA season for athletes in these fall sports.

Not joining them were competitors in football, volleyball and boys’ soccer, all traditional fall sports that have been moved to a February start in response to the pandemic.

Urbana girls’ tennis coach Parker Sands recognizes the break his kids were given as opposed to the Tigers who compete in those three aforementioned sports.

“I was hoping that the (IHSA’s) decision would not have been made with a broad stroke,” Sands said. “Obviously, I feel very terrible and very bad for the players and families whose sports have been augmented or canceled. That being said, I’m just very excited that we get the opportunity to play, and I hope ... we’re able to complete the season.”

Sands didn’t have many kids taking to the courts at Urbana’s Blair Park on Monday, but the four who did along with he and assistant coach Jeff Unger each received their own tennis balls. Sands labeled each ball in black marker with a player’s initial, as athletes can only touch tennis balls set aside for them specifically, according to IHSA rules released last Friday.

“There are some things that are going to make my job more difficult, per se,” Sands said, “but in this particular timeframe, again, my joy for being out here far outweighs any slight predicament that I might have to go through.”

The biggest challenge for coaches like Brewer and Mahomet-Seymour boys’ golf coach Dave Sebestik was making sure a large group of kids was appropriately spaced out.

Both oversaw more than 30 athletes Monday, with Sebestik running the first day of team tryouts at Lake of the Woods Golf Course in Mahomet.

Brewer actually had junior high runners in attendance at the Arboretum as well. But that group, combined with her high school unit, would have put the Illineks over the state’s 50-person gathering limit, so Brewer sent the younger kids to a different part of the expansive green space and split her time between the two sides during a 90-minute practice.

The end of that workout marked Brewer’s first time addressing the Uni High distance runners in person since she was hired in the offseason. The Tuscola graduate and winner of the 2017 Christie Clinic Illinois Marathon women’s race used that short period attempting to spread her voice as much as possible, to reach all of the kids sitting widely spread out around her.

“I was pretty surprised that we were approved for a season,” Brewer said. “Just being able to be around other people is helpful. I’m trying to take it in stride. It’s quite a year to become a head coach.”

Champaign Central girls’ swimming and diving coach Katie VanHootegem and her assistant coaches spent Monday trying to keep cool inside a warm Unit 4 Pool facility at Centennial while directing 13 athletes through their first in-water workout as Maroons since the pandemic began.

“Minus me wearing a mask, yes, it’s pretty normal,” VanHootegem said. “We’re running through a similar practice. We do a lot of drill work the first week for our new swimmers and our old swimmers to create new habits.”

VanHootegem placed two athletes in each pool lane — permitting up to three, which she said was allowed in a USA Swimming diagram posted on the organization’s website — and had them swimming in opposite directions. Each girl’s belongings also were spaced out on separate chairs approximately 6 feet apart.

“I’m just happy we’re able to get back in the water, because with these girls, it’s not just about swimming,” VanHootegem said. “They reach out to us all the time. They call me their second mom because they call me or text me or message me about a lot of different things.”

VanHootegem said she’s asked Central athletic director Jane Stillman that the Maroons not race in a meet until Aug. 31 at the earliest, despite being allowed to compete as soon as Aug. 24 under IHSA guidelines, so the athletes can be properly prepared and trained.

Cross-country meets also are allowed to start Aug. 24, while golf tournaments can begin Thursday and tennis events on Aug. 20. Brewer said she’s offering the Illineks two options for weekly practice planning, one of which accounts for an athlete not competing in any meets.

“We have some kids that just aren’t super comfortable attending meets and everything with how the environment is ... ever-changing,” Brewer said. “I wanted to make sure they still got to be on the team but also make sure they got to be safe in whatever way they felt was best for them.”