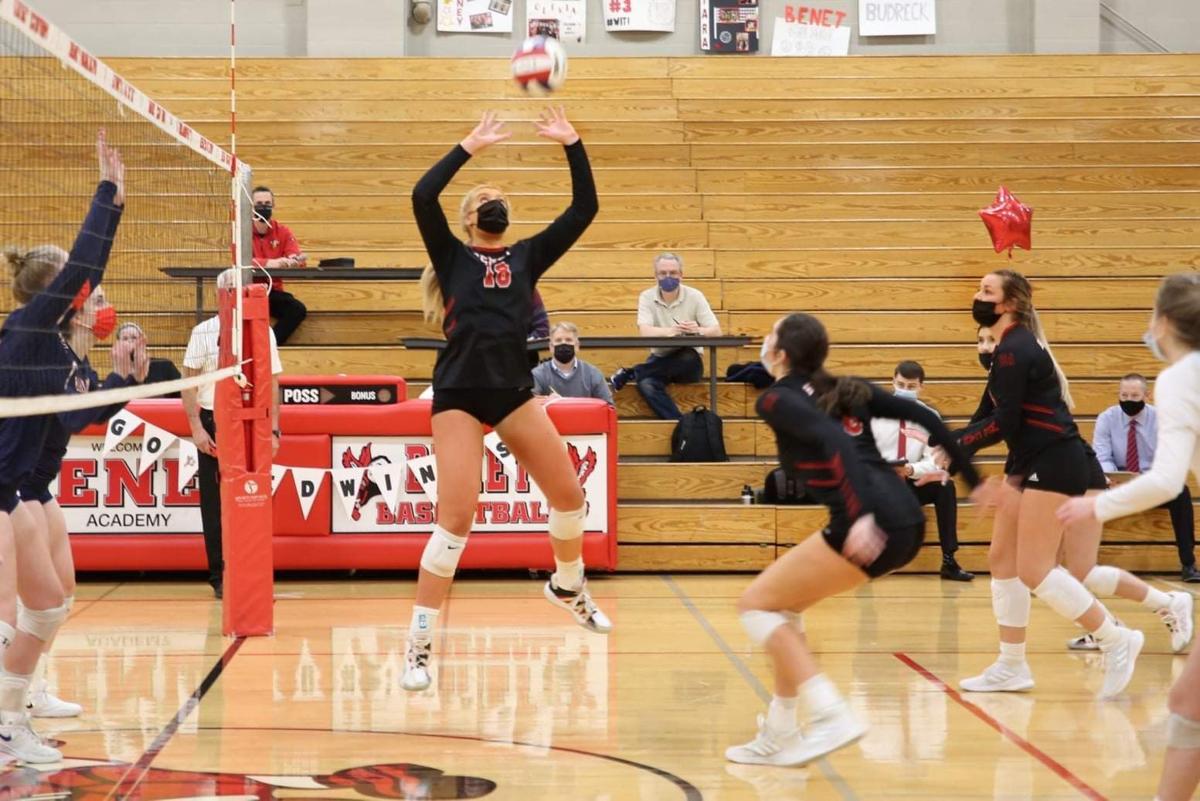 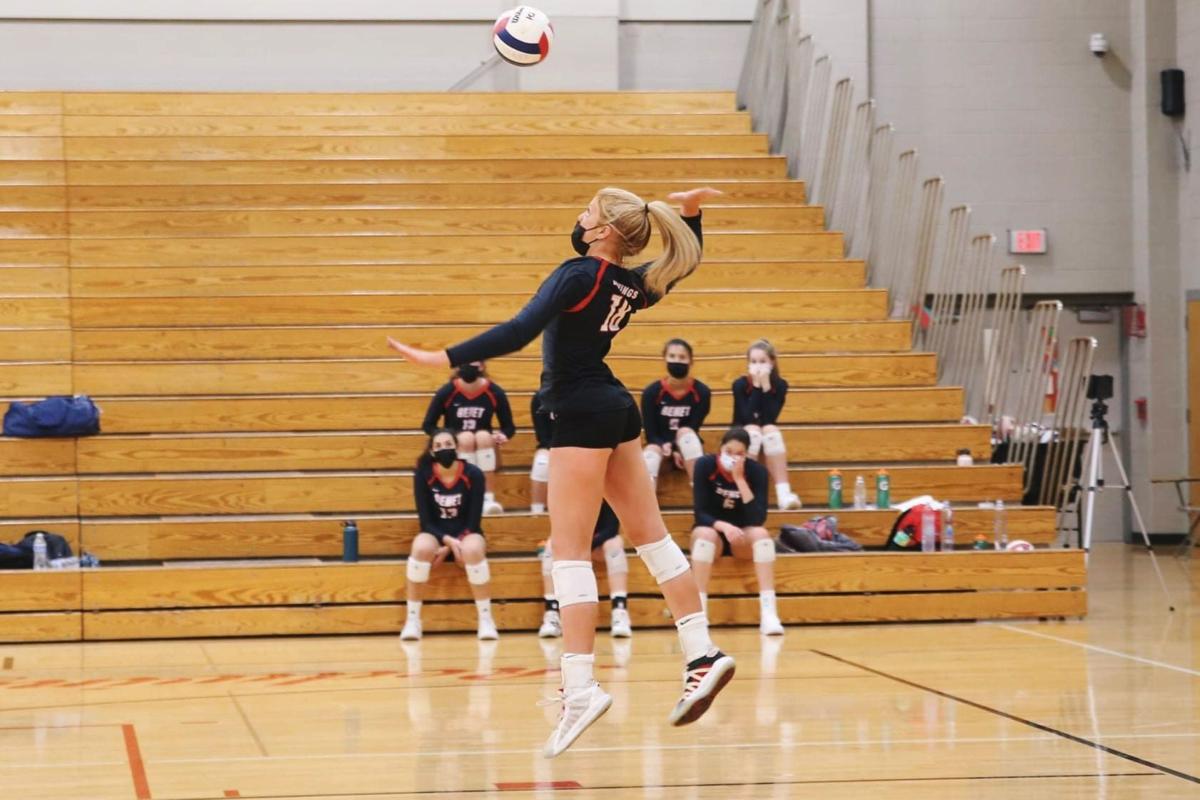 Whether it was serving in an empty gym this past spring (above) or setting in front of fans at the 2019 state tournament (below), Rachel Muisenga did it all for the Benet volleyball program. The News-Gazette’s All-State Player of the Year for the 2021 spring season, Muisenga is set to begin her college volleyball career this fall at Penn State. 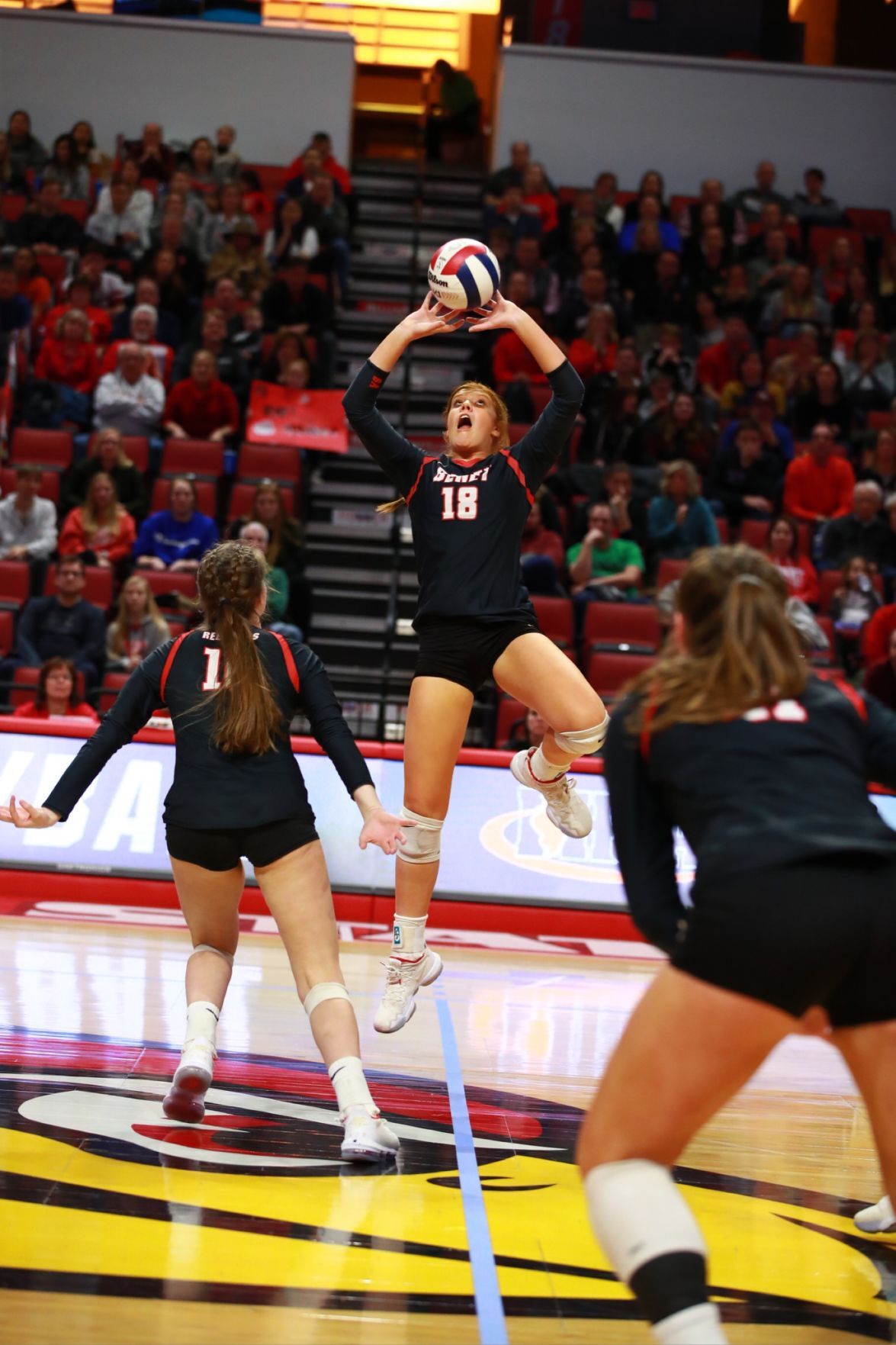 Whether it was serving in an empty gym this past spring (above) or setting in front of fans at the 2019 state tournament (below), Rachel Muisenga did it all for the Benet volleyball program. The News-Gazette’s All-State Player of the Year for the 2021 spring season, Muisenga is set to begin her college volleyball career this fall at Penn State.

CHAMPAIGN — The pandemic-delayed high school volleyball season in Illinois created a conflict in the typical schedule for the sport.

This year? High school and club seasons would overlap, with the IHSA moving its season from fall to spring because of COVID-19.

Some of the state’s best players opted out of the high school season, shifting their focus solely to their club team. Others split their time between the two, delicately balancing two teams during a pandemic.

Benet Academy coach Brad Baker wasn’t sure at first what his team would do. The Redwings have been a dominant player in the state during Baker’s tenure with a 476-53 record in the previous 13 seasons, seven state appearances and four state titles. That included a 41-1 record and Class 4A state championship in 2019.

Baker’s uncertainty turned out to be all for naught. Benet rolled out its expected stacked rotation with Creighton commit Ann Marie Remmes at middle blocker, future Indiana outside hitter Kyla Kenney and Elon-bound libero Caroline Doyle.

At the center of it all was senior setter Rachel Muisenga, who guided Benet to a perfect 10-0 record, put up 231 assists, 65 digs and 30 kills and was named the 39th News-Gazette All-State Player of the Year before heading to Penn State this summer.

“I feel like the girls walked away feeling as good as they could about the season,” Baker said. “Being able to go 10-0 and beat some of the best teams in the state was good. There was no state championship, but I think those girls — they won it the year before and you never know for sure — but I think they feel like they would have had another shot to win it all and felt really good about the way they ended.”

Time well spentOne last run with her Benet teammates played a significant role in Muisenga’s decision to play this spring. She played as a freshman for the Redwings and had a role as a sophomore during their third-place finish before leading the way for the 2019 state title.

“It was strange — definitely not a typical season — but I think everyone was just really grateful for the limited time we had and what we were able to do in that short month, month-and-a-half. It was super special to end that way.”

Without another state title to play for, Benet’s primary goal was an undefeated spring season. The Redwings got it despite a difficult schedule that included the likes of Mother McAuley, Wheaton Warrenville South, Nazareth Academy and Marist. They swept eight of its 10 matches, with only Mother McAuley and Marist taking a set off them.

Muisenga led Benet through that unbeaten run just like she did in 2019 in a season that featured just a single loss to Marist in the final match of the regular season.

It was her time on the court and in practice as a freshman and sophomore with the Redwings’ typical handful of Division I bound athletes that helped develop Muisenga into a capable leader moving forward.

“I would not say that always came easy to me,” Muisenga said. “I’ve been setting and hitting since I was like 12, but it definitely took me some time to develop that leadership role. I wasn’t always so calm on the court. Playing with older girls helped me to understand not to be so frantic and not to worry and focus on the next point.”

Big decisionThe big moments — the matches against the Marists and Mother McAuleys and Minookas of the world in the past several seasons — illustrated to Muisenga why she had to lead. That it was a necessity.

That doesn’t change at her next step. Playing at Penn State will provide nothing but big moments in the Big Ten. While the Nittany Lions have multiple setters on the roster and Gabby Blossom returns after starting this spring, Muisenga will give them a different look as a physical, 6-foot-1 option.

“There’s very few 6-foot kids who touch 10 feet,” Baker said. “There’s kids that maybe have that size, but they don’t have that athleticism or move like her. Having all those, there’s very few of them in the nation that are like her.”

Muisenga committed to Penn State nearly three years ago after a recruitment that started when she was in eighth grade and included multiple interested Big Ten and SEC programs. She attended a couple Penn State camps, got comfortable with the program and when legendary coach Russ Rose called with an offer, she was ready to say “yes” on Aug. 2, 2018.

“It wasn’t a tough decision once they had chosen me,” Muisenga said. “I definitely ended up where I wanted to be. Penn State has a great legacy and great coaching, obviously — one of the best — and I just knew that I wanted to play at a high level and wanted to be with the best of the best and put myself in those situations. I can’t be happier with my decision.”

Greater challengesThat decision, of course, comes with a considerable challenge attached. Rose, who has coached the Nittany Lions since 1979, built Penn State into one of the elite programs in the nation. Rose has a 1,308-217 career record, and the Nittany Lions have won seven national titles.

“I believe she’s up for it, no doubt, but it’s going to be eye-opening the amount of work I think they’ll expect her to put in. I don’t think she would have chosen Penn State had she not thought that was going to be in front of her. That’s why you go to a school like Penn State — to get challenged and to be put in situations that make you uncomfortable.”

But Muisenga knows what she signed up for.

Honor roll: The News-Gazette All-State volleyball Players of the Year

{p class=”card-about”}Scott Richey is a reporter covering college basketball at The News-Gazette. His email is srichey@news-gazette.com, and you can follow him on Twitter (@srrichey).