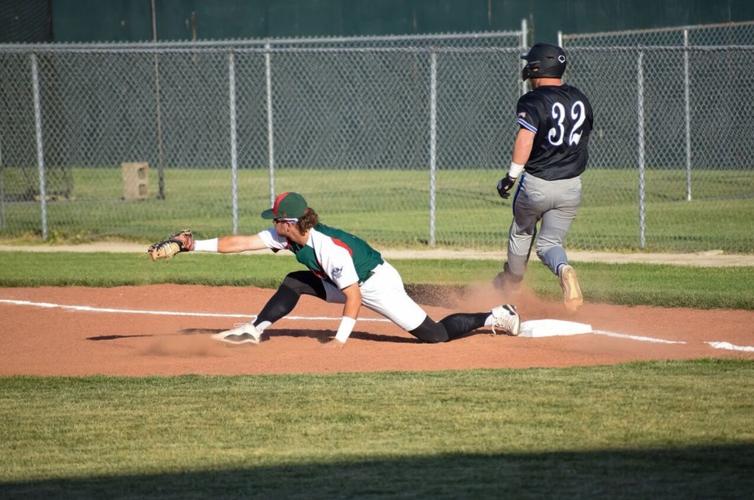 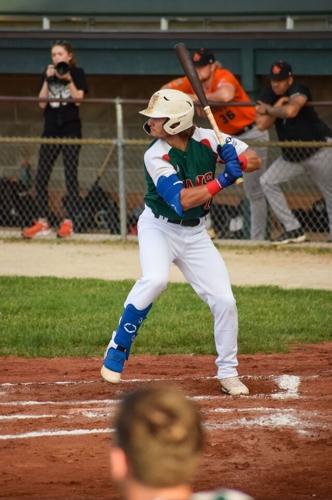 Danville Dans first baseman Chase Vinson prepares to see a pitch during a game this season. The Oakwood graduate was hitting .255 with 11 RBI going into Wednesday's Prospect League game against the Terre Haute REX.

Danville Dans first baseman Chase Vinson prepares to see a pitch during a game this season. The Oakwood graduate was hitting .255 with 11 RBI going into Wednesday's Prospect League game against the Terre Haute REX.

DANVILLE — Chase Vinson’s baseball career has taken him all over Vermilion County.

The 2018 Oakwood graduate helped the Comets baseball program to a 2017 Class 1A sectional championship and twice was a News-Gazette All-Area second-team selection in the sport.

He then spent three years on the Danville Area Community College baseball roster — one of them at the outset of the COVID-19 pandemic.

Now, Vinson is providing his diamond presence for yet another of Vermilion County’s baseball clubs.

Vinson is the starting first baseman for the Prospect League’s Danville Dans. Prior to Wednesday’s game against the Terre Haute REX, Vinson was hitting .255 across 13 appearances, leading the squad in both home runs (two) and walks (13) while sharing the team lead in RBI (11).

“It’s going well. ... It’s a grind, for sure,” Vinson said. “Playing that many games, you’re not really practicing as much as at school. You’re just playing and trying to get better every day.”

This marks Vinson’s second stint with the Dans, who are now 8-6 after Wednesday night’s 20-10 loss to the REX in Terre Haute, Ind. He participated in 10 games on the back end of Danville’s 2021 slate, posting a .290 batting average.

“At the end of last year, Coach (Eric Coleman) asked me if I wanted to come back for a full season,” said Vinson, who also is part of the Morehead State college baseball program. “The Dans are normally a very high-level team in the Prospect League. They win, they’re well-coached and I just thought it would be a good opportunity for me.”

“Growing up and watching these players, you always (feel) like they’re big-leaguers,” Vinson said. “I’ve always wanted to play here. There’s been some local guys that have played for the Dans, and it’s nice to be part of that group.”

Vinson is the only local athlete on Danville’s roster this summer. But he’s far from the only current Division I baseball player suiting up for the Dans.

“Playing in ... a collegiate league is a different animal,” Vinson said. “Guys are here for different reasons. ... You definitely can tell the work ethic is by far the thing that stands apart, where guys want to get better. And it’s nice being around guys like that, because it’s contagious.”

Vinson also appreciates working under Dans assistant coach Ron Polk, who joined the staff for Danville’s 2022 season. Polk has more than half a century of experience within the D-I coaching ranks.

“He’s been in the game for a very long time, and it’s nice having him around and sharing the knowledge,” Vinson said. “Another thing is the little things — the mental side of it and understanding how to play baseball at a high level. That’s definitely something he can teach.”

Vinson’s inclusion on the Dans’ roster gives him two benefits his teammates don’t possess: He has plenty of familiar faces rooting him on at home games, and he’s able to live at his family’s home during the season.

“It’s nice playing in front of friends and family and people in the community,” he said. “It’s still a little weird being known as the local kid, because these guys are coming from all over the place.”

That Vinson is using his Dans experience to prepare for a second season with Morehead State — he hit .260 with 10 home runs, 39 RBI and 22 walks in 52 games for last season’s 27-27 Eagles — is something that wasn’t guaranteed one year ago.

Vinson said he wasn’t hearing much on the four-year college recruiting front while wrapping up his time at Danville Area Community College. It took until June 2021 for Morehead State coach Mik Aoki to make contact with Vinson.

“He said they were having a camp, and he wanted me to come. And I said, ‘Yeah, I’ll take that opportunity,’” Vinson said. “I had a solid role with the team (last season), and I kind of liked where I was at with them.”

Vinson hopes his path to D-I baseball — as well as all of his other athletic accomplishments in Vermilion County — can inspire local youngsters.

“It’s awesome just being a role model, especially for the kids,” Vinson said, “and trying to show them it’s not always going to be easy. I wasn’t recruited heavily. ... It’s nice for them to see, no matter what their situation is, if you can find a way, just keep going and things will work out.”

Oakwood vs. Westville in a prep football game at Westville high school on Friday, October 1, 2021.