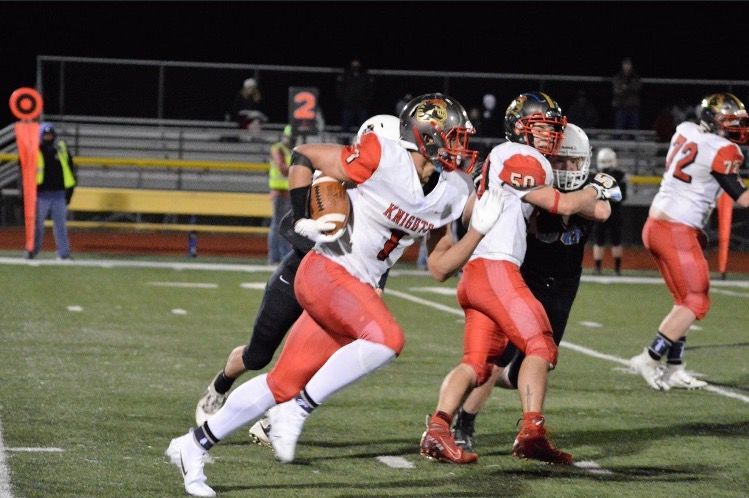 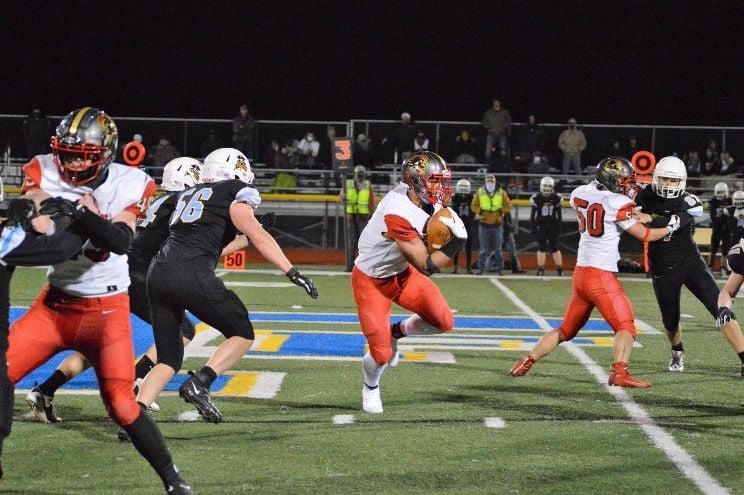 Arthur-Lovington-Atwood-Hammond running back Kaden Feagin carries the ball during a March 19 game against Cumberland. Feagin has rushed for five touchdowns during the Knights’ 1-1 start to the season.

Arthur-Lovington-Atwood-Hammond running back Kaden Feagin carries the ball during a March 19 game against Cumberland. Feagin has rushed for five touchdowns during the Knights’ 1-1 start to the season.

ARTHUR — Kaden Feagin’s cell phone could have rang for numerous reasons on the afternoon of March 19.

It didn’t have to be a potentially life-altering event.

The Arthur-Lovington-Atwood-Hammond sophomore is glad it was.

“I was coming home from school, and my mom called me,” Feagin said. “Then I went to the grade school up in Atwood. My coach and my whole family was there.”

That’s when ALAH football coach Ryan Jefferson delivered a significant piece of news to his star running back and linebacker.

“Coach comes up and says, ‘Don’t be nervous, but you’re about to talk to the head coach of the U of I,’” Feagin said. “It was just crazy.”

Yes, Illinois football coach Bret Bielema wanted to chat with the Atwood native. And give him a college offer as well.

It’s Feagin’s first in any sport — he also plays basketball and competes in track and field.

“It meant a lot, knowing I grew up 45 minutes away from Champaign,” Feagin said. “I couldn’t believe it. I still can’t believe it, really.”

The 6-foot-3, 221-pound athlete might want to get used to it. Rutgers extended an offer to him on Wednesday night.

Feagin has accounted for six touchdowns — five rushing and one punt return — in ALAH’s 1-1 start to its six-game spring season. And he’s covering significant ground, finding the end zone from 9, 36, 47, 50, 69 and 80 yards out.

“I feel like I’m being more aggressive and just going down the hole,” Feagin said. “Last year I was kind of hesitant on doing certain things because I was a freshman.”

The statistics don’t show it.

At the end of the 2019 season, Jefferson told The News-Gazette Feagin’s development made sure “everyone knows who this kid is by now,” and that “he will be very special in the following years.”

“It just makes me want to work harder to get more offers,” Feagin said. “I just can’t stop working because (I have this offer).”

Feagin also averaged 12.7 points and 7.0 rebounds during his recently-completed sophomore basketball season and plans to compete in the 200-meter dash, 800 relay, long jump and triple jump once track and field season rolls around.

Feagin said Bielema indicated to Feagin that he’d like to have the youngster on campus in June, once the NCAA recruiting dead period theoretically is over.

“I went to the homecoming game ... when I was a sixth-grader,” Feagin said. “(I was) just seeing how committed the fans were to the team and how deep the passion for the Illini goes.”

Prep sports on hold: ALAH's Carroll must wait to follow up on huge junior season

Ben Carroll returned from injury to lead the area with 10 interceptions and also racked up 75 tackles, but his first chance to improve upon those numbers has been put on hold.