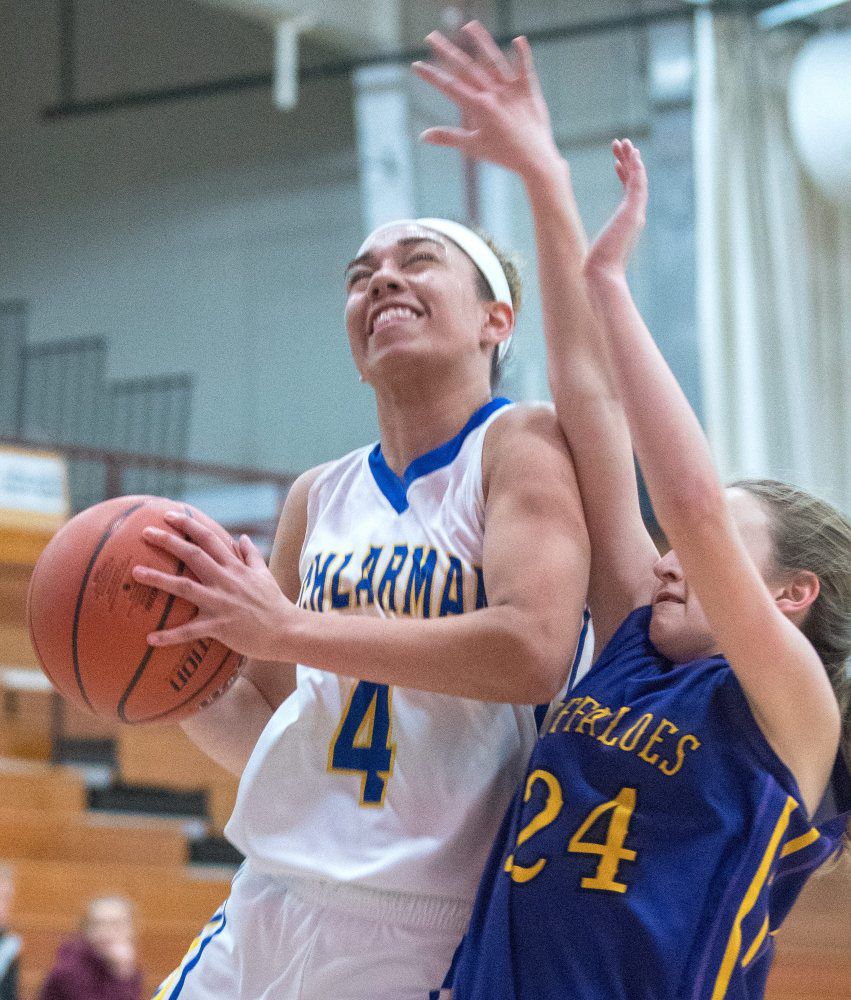 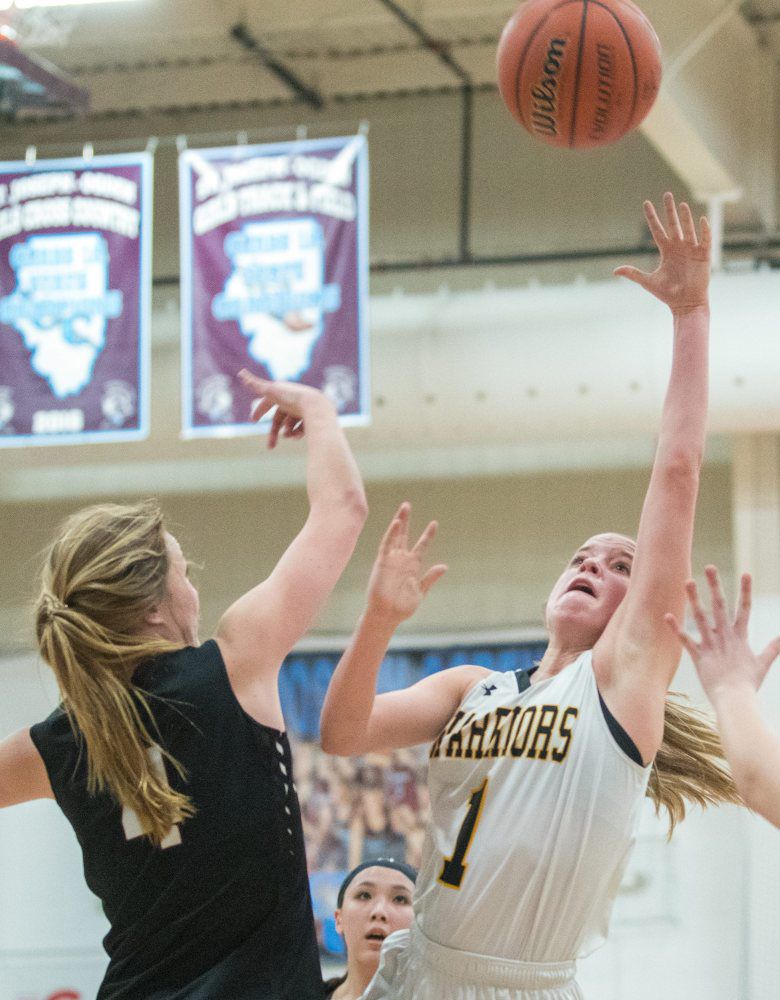 And the bid that did wind up falling didn’t elicit the strongest endorsement from Warriors coach Tim Kohlbecker.

“It was one of those where the coach is going, ‘Oh, no. Oh, no. Oh, nice shot,’” Kohlbecker said with a laugh.

The win occurred 11 days after the Warriors (17-9) outlasted the Maroons (17-15) in overtime at the CIC Tournament.

“We struggled in the fourth quarter (Monday). It became a slugfest,” Kohlbecker said. “I was really proud of our girls.”

Jacob’s bucket, part of her team-best 12 points on the night, put Tuscola ahead 32-31. A Brynn Tabeling free throw a short time later accounted for the final tally, and Tabeling finished with 11 points.

Kohlbecker tasked Sophie Kremitzki with shutting down Clinton’s leading scorer, Mallory Cyrulik, and the outcome was a scoreless evening for Cyrulik.

Kaitlyn Rauch did plenty to frustrate the Warriors with 17 points, but that wasn’t enough.

“(Rauch is) so fast off the dribble, we struggled to contain her,” Kohlbecker said. “But we did stop (Cyrulik). We had to rig up a special defense to keep her in check.”

Hope Dietrich added nine rebounds for the Warriors, who match up with second-seeded St. Joseph-Ogden (19-10) in Tuesday’s 6 p.m. semifinal.

“We played them early in the year and lost in overtime, but we’re playing them in regionals at their place, and they got to rest,” Kohlbecker said. “I really look forward to the matchup with them.”

The sixth-seeded Hilltoppers (17-6) led the 12th-seeded Buffaloes (0-24) by a 17-2 margin through eight minutes and never looked back in this quarterfinal result.

Schlarman’s first foray into Class 2A postseason basketball took in 30 points from Capria Brown, who hit five times from beyond the arc. The Hilltoppers also landed 18 points from McKaylee Allen and 11 points from Tannah Ceader and will take on third-seeded Villa Grove/Heritage (24-5) in Tuesday’s 7:30 p.m. semifinal.

After watching a five-point lead through three quarters evaporate over regulation’s last eight minutes, the eighth-seeded Sages hung on for an overtime victory in a quarterfinal with the 10 seed.

Lizzie Stiverson sank a free throw with no time remaining in the extra period to account for the final margin, and she compiled a game-leading 22 points for Monticello (12-17).

Cloe Clark’s 13 points and Hannah Swanson’s 10 points also were key for the Sages, who will meet top-seeded Bismarck-Henning/Rossville-Alvin (26-5) in Wednesday’s 6 p.m. semifinal.

Katelyn Young outscored her opponent with 29 points, guiding the fifth-seeded Comets (23-7) to a quarterfinal success against the Tigers (7-23).

Young sank 13 two-point field goals as part of her performance and was backed by Ashlynn Pinnick’s 12 points and Karsen Rupp’s eight points. Oakwood moves on to a 7:30 p.m. Wednesday semifinal with fourth-seeded Unity (20-9).

The sixth-seeded Cornjerkers (13-16) did enough offensively to keep down the upset-minded 11 seed. Hoopeston Area continues play on its home floor in Wednesday’s 7:30 p.m. semifinal with No. 4 Watseka (21-8).

The 10th-seeded Falcons (7-22) couldn’t generate more than seven points in any single quarter, ultimately falling to the 8 seed in a quarterfinal bout. GCMS’s Ryleigh Brown led her squad with 11 points in defeat.

Dina Hashash erupted for 26 points to pace the eighth-seeded Illineks in taking down the No. 9 seed and regional host in quarterfinal action.

“We talked about Iroquois West being in a little bit of a tougher conference than what we’re used to playing, and they played really tough,” Uni High coach Brad Wilson said, “but we came out and we battled, and we wanted to play the number one seed.”

Wilson praised Hashash for recognizing her ability to get to the rim with regularity. He also felt that was true of freshman Emma Murawski, who finished with 13 points.

“At the beginning of the year ... she was a little apprehensive,” Wilson said of Murawski. “But she’s learning to take the ball to the basket and improving every single day.”

“It’d be huge (to beat the Mustangs),” Wilson said. “We’ve been trying to build this for the last two years, and we’re making strides.”

The Raiders (8-24) were led by Shelby Johnson’s 12 points and McKinley Tilstra’s eight points.

Kallie Evans mustered up 20 points for the fifth-seeded Bunnies (14-15), who took down the 11 seed in a quarterfinal showcase. Sidney Hood’s 12 points and Ashley Smith’s 12 rebounds also paved the way for Fisher to qualify for Tuesday’s 7:30 p.m. semifinal with No. 4 Salt Fork (18-12).

Kennedy Ramshaw produced 15 points for the seventh-seeded Sabers, who used a 14-7 advantage after one quarter to push past the 10th-seeded Trojans in quarterfinal play.

The 12th-seeded Timberwolves (7-23) pulled off an upset of the sixth-seeded Tribe (16-14) in quarterfinal action, avenging a two-point loss to Judah on Dec. 21.

Cissna Park moves ahead to a 7:30 p.m. Tuesday semifinal with No. 3 Lexington.

The Tribe, which was without leading scorer Sa’kinah Williams because of a knee injury, was outscored 13-0 in the first quarter and received seven points apiece from Tory Clevenger and Lyndon Pelmore.

The fifth-seeded Purple Riders (15-11) handled the 11th-seeded Cardinals (2-21) in a quarterfinal contest and qualified for Tuesday’s 7:30 p.m. semifinal with third-seeded regional host Arthur-Lovington-Atwood-Hammond (17-11).

Jaclyn Pearl boasted 13 points for the seventh-seeded Knights (12-19), who dispatched the ninth-seeded Eagles in a quarterfinal. Jenna Mozingo’s 10 points also proved important for Blue Ridge, which will face top-seeded St. Teresa in a 6 p.m. Tuesday semifinal.

Peyton Lappin scored most of D-W’s points, finishing with eight.

The eighth-seeded Bombers (7-17) worked around the 10 seed in a quarterfinal and ended a seven-game skid in the process. They draw second-seeded Warrensburg-Latham in a 6 p.m. Wednesday semifinal.