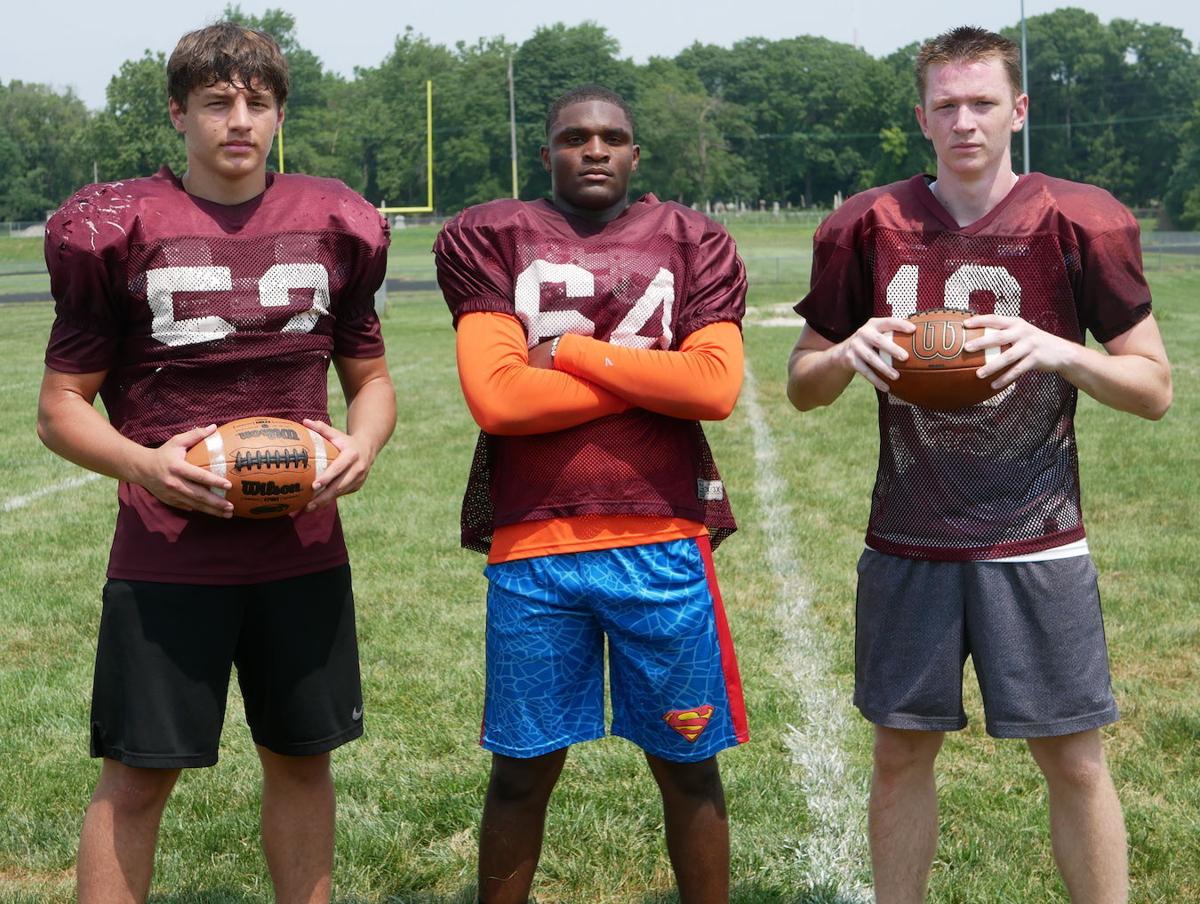 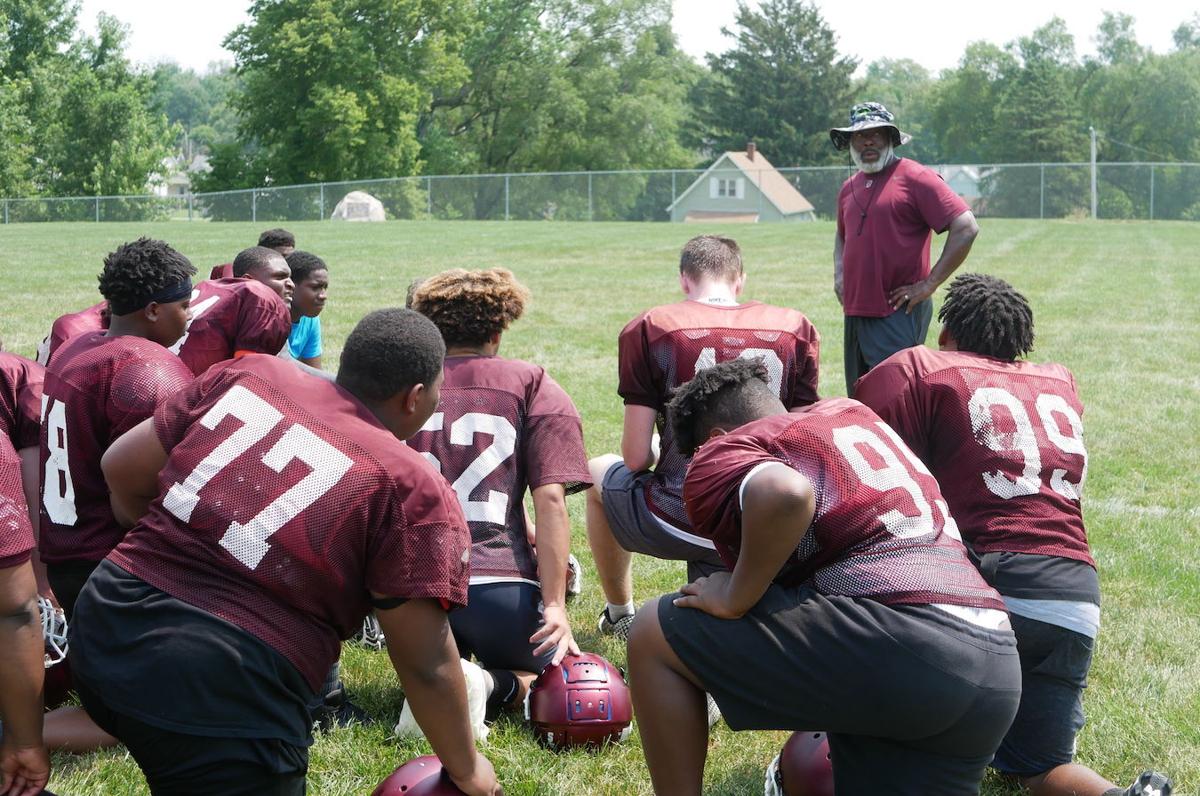 Danville football coach Marcus Forrest, back right, speaks to his athletes following Wednesday’s team workout at the Vikings’ practice field. Forrest is back overseeing the team after missing the 2021 spring season following a successful heart transplant.

Danville football coach Marcus Forrest, back right, speaks to his athletes following Wednesday’s team workout at the Vikings’ practice field. Forrest is back overseeing the team after missing the 2021 spring season following a successful heart transplant.

DANVILLE — Marcus Forrest managed to get on the field for one of the Danville football team’s games during its 2021 spring season.

This was a big feat, considering the Vikings’ coach underwent successful heart transplant surgery back in February.

Forrest couldn’t lead his athletes during his fourth year in charge of the program, but he at least could offer them some support.

“But then, next week, both the principal and the superintendent slowed that down,” Forrest said with a grin. “They watch out and take care of me.”

Forrest might have tried to do too much, too soon in his recovery from a major health operation.

Forrest is back working full-time with the Vikings — the No. 6 team in The News-Gazette’s preseason top 10 countdown — ahead of their Aug. 27 season and home opener versus Champaign Central.

“Physically, I’m doing pretty well. Feel good. Feel excited to be here,” Forrest said following a Wednesday morning team workout on Danville’s practice field. “I still watch myself. Thankfully, I’ve got assistants that watch out for me, too. When I get too involved in doing stuff, they slow me down.”

Forrest’s players are relieved that he’s able to return to the fold after such a serious roadblock as congestive heart failure, which led to the transplant.

“(Forrest) brings a certain energy to the locker room and everyone around,” Danville junior receiver/strong safety Matthew Thomas said. “It’s really nice having him back.”

“We were trying to win games for him,” sophomore quarterback/outside linebacker Micah McGuire added, “and praying for him because he had a new heart coming in.”

Fifteen seniors were part of those games. And so too were multiple juniors, sophomores and freshmen who now are one year older — and a few varsity games more experienced.

“We’re bigger, stronger and much better,” Matthew Thomas said. “Some of the (opposing) teams will be a lot younger than us, and I think it gives us a little bit of an advantage.”

Danville outscored Central and Centennial by a 43-12 margin earlier this year. Those just happen to be the Vikings’ first two opponents this fall, followed by a four-game stretch against Peoria-based schools. Normal Community is off the schedule this time around, though Normal West is not.

“Definitely tons of room for improvement ... but that’s a given,” Danville junior lineman Calvin Hempel said. “I feel like, with the circumstances and all the things working against us (in the spring), we did pretty good.”

Forrest’s program, however, currently finds itself in a strange but not uncommon spot: Many of its returning athletes currently are in a COVID-19 quarantine.

That’s giving some incoming freshmen a chance to receive full varsity treatment in practice, mirroring how the Vikings’ underclassmen were thrust into varsity-game action last spring.

“That little bit of experience helps tremendously,” Forrest said. “You can tell kids the difference in physicality (from junior varsity to varsity), but it’s a whole different thing when they have to go through and see it.”

“Every day you take off is a day you lose,” Hempel added when discussing the importance of continuing workouts with a depleted roster. “Can’t get that back. So it’s just an emphasis on getting better every day.”

Danville’s offense was slowed against Normal Community and Peoria Notre Dame last spring, and the Vikings will need to work past the graduation of quarterback Eric Turner Jr., running back Devin Miles and multiple offensive linemen.

Junior Javin Miles — Devin’s younger brother — and McGuire are duking it out for Danville’s starting quarterback gig. Forrest said both could play, as well.

A running backs stable of senior Tommy Harris and juniors Bryson Perez-Hinton, Antuan Lee and JaMarion Clark will support the new quarterback, who will be throwing to the likes of Thomas and senior Tyler Jones. Hempel will lead the offensive line at either center or guard.

“It’s not like we can depend on one kid now, as in past years,” said Forrest, at least partially hinting at 2019 N-G All-Area Player of the Year Devin Miles. “That’s one of the things we’ve been trying to get them to do over the past few years: not just worry about your job, but understand how everything works together like one big puzzle.”

Hempel, seniors Semaj Taylor and Samuel Pollard and junior Bodyn Gagnon are expected to prop up the defensive line while players such as Harris and sophomore Caleb Robinson patrol the field at linebacker.

“We’ll have quite a few kids that will be playing both ways because I like putting the best athletes that we have in the best possible situation to be able to play,” Forrest said. “And at 15, 16, 17 years old, you should be able to run all day.”

These Vikings also would like to make their third playoff run in Forrest’s tenure, following Class 6A postseason appearances in 2017 and 2019.

“Last year, we had that Big 12 Conference tournament,” Hempel said, “but it’s nice knowing we actually have goals to go after this year. We actually have things to chase.”