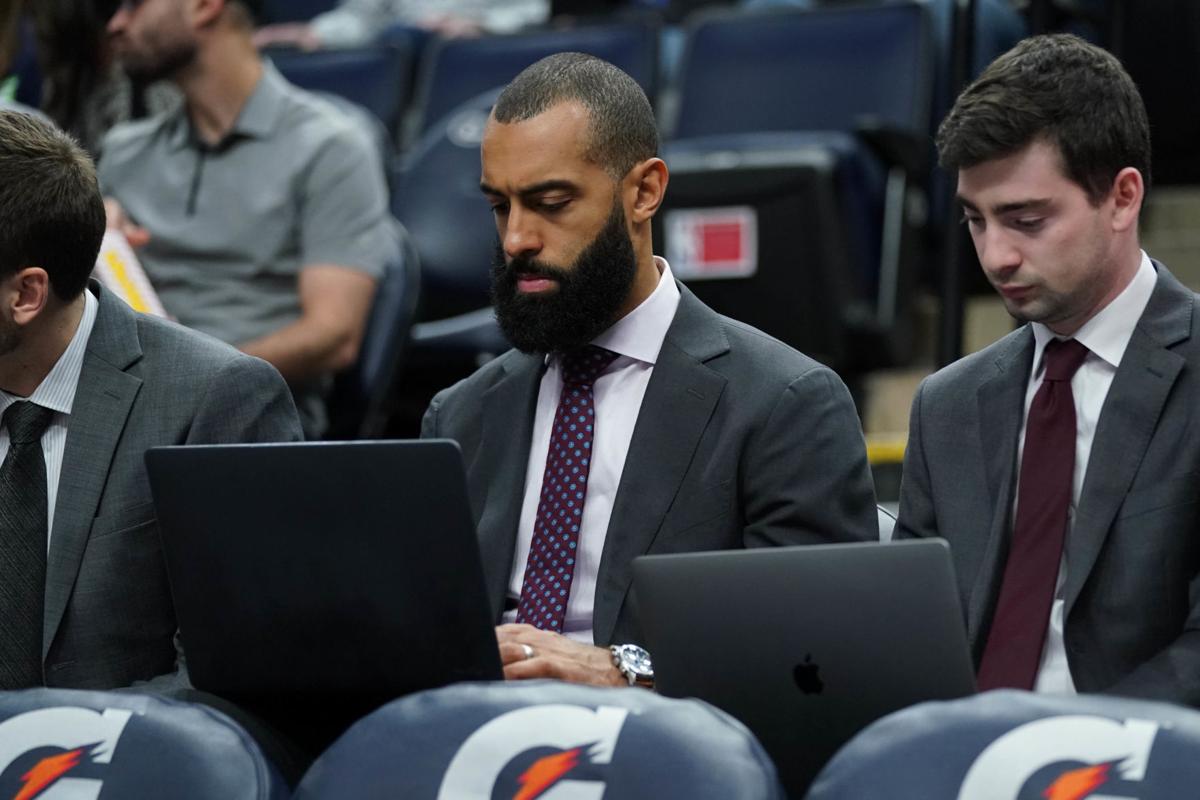 Former Illinois mens’ basketball player Brian Randle, middle, has forged a career in the NBA, landing a job earlier this month as an assistant coach with the Phoenix Suns after an earlier stint on the Minnesota Timberwolves’ staff. Randle, a former Peoria Notre Dame standout, played four seasons in Champaign, where he scored 844 career points and tallied 547 career rebounds as a member of the Illini from 2003-2008. ‘I’m just me, man,’ Randle said of his coaching style. ‘To my core, I’m pretty even.’ 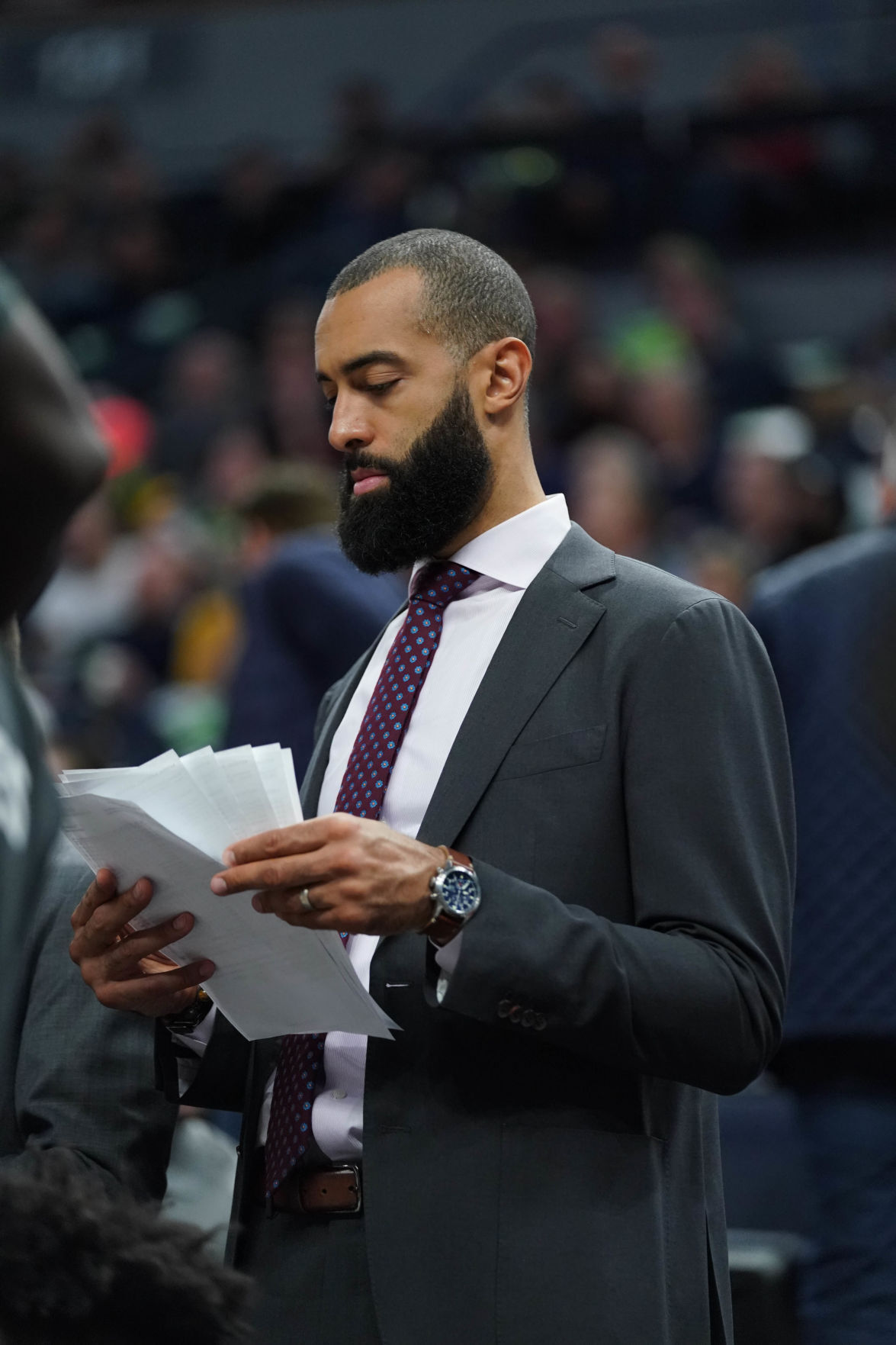 Former Illinois mens’ basketball player Brian Randle, middle, has forged a career in the NBA, landing a job earlier this month as an assistant coach with the Phoenix Suns after an earlier stint on the Minnesota Timberwolves’ staff. Randle, a former Peoria Notre Dame standout, played four seasons in Champaign, where he scored 844 career points and tallied 547 career rebounds as a member of the Illini from 2003-2008. ‘I’m just me, man,’ Randle said of his coaching style. ‘To my core, I’m pretty even.’

He occasionally pondered different jobs for when his time on the court was done, but those first couple years in Israel, a short stint in Germany and then back to Israel didn’t put coaching in his future path either.

Then Randle became the “older guy.”

That’s a label, of course, that only applies to people in their early 30s when it comes to careers in professional sports. Randle became a go-to veteran for younger players during his final years as a pro in Israel and Italy. The former Illini forward found he liked talking game planning and the playbook with rookies and second-year players new to basketball overseas. He liked showing them how to be a professional.

“Those things really piqued my interest,” Randle said. “The NBA wasn’t a goal — coaching wasn’t a goal — until the latter end of my career. I thought to myself, ‘You know what? I think I might be a pretty good coach, and this might be something I should check out.’”

Randle got his foot in the door ahead of the 2018-19 NBA season as an assistant video coordinator with the Minnesota Timberwolves. A promotion this past season saw him take on a new challenge as a player development coach.

Randle’s quick rise through the NBA coaching ranks continued earlier this month when the 35-year-old was hired as an assistant coach by the Phoenix Suns.

Randle was surprised by the Suns’ interest. He knew of Phoenix coach Monty Williams, of course, and was familiar with others in the organization but didn’t have any personal relationships.

“I’m starting to realize how tight of a community the basketball world is,” Randle said. “It came about through some random conversations about staff construction with another organization, and my name came up and got passed along. The next thing I know, I’m doing some interviewing for the Suns. It was very surprising, very organic in that way.”

Randle’s interview process played out remotely given the COVID-19 pandemic. He spent a lot of time on the phone with Williams and Phoenix general manager James Jones. A necessity of landing a new job in 2020 actually played in Randle’s favor. He could answer all of their questions from the comfort of his own home.

“For as much as it came out of nowhere, I’m going to be honest, it was a little less daunting than when I was first trying to get into the NBA,” Randle said. “I still remember going into (then Minnesota coach) Tom Thibodeau’s office and doing my best to stay composed. He’s a very strong personality, and I think his reputation preceeds him as being a leader.”

Randle’s time in Minnesota helped propel him into his new opportunity in Phoenix. While the Timberwolves moved on from Thibodeau to Ryan Saunders midway through 2018-19 season, the former’s attention to detail permeated throughout the organization. It was Randle’s introduction to the NBA and to basketball not as a player.

“It taught me, one, a better understanding of what hard work is,” he said. “It helped me understand the importance of details and getting things right — not having to go back and redo things, but getting them right the first time. My first year was like a crash course in all things being a professional not as a player. It was awesome. It was difficult and it was quite a shift, but it was awesome.”

Saunders elevated Randle to a player development role ahead of the 2019-20 season. That added some game preparation responsibilities to his role in addition to one-on-one work with individual players.

“Getting on the court and having a voice — a coaching voice, if you will — was another step in my maturation process,” Randle said. “Really every year as a coach you’re growing, but my first two years felt very fruitful and really sped up my growth process by the people I was able to work with and work under and the responsibilities I had.”

Coaching influencesWorking for Thibodeau and Saunders has shaped Randle as a coach. So did playing for Bruce Weber at Illinois from 2003-08 and Guy Goodess in Israel. His style as a coach, though, will be all his own and true to himself.

“Coach Monty mentioned to me he’s learned now just to be himself. You take things from people — this thing or that thing that can add to you — but I’m not going to be Tom Thibodeau. I won’t be a Ryan Saunders. I won’t be a Monty Williams or a Bruce Weber. Hopefully I’ve grown by being under them and being able to take some of the great things they have and just be me.”

Randle’s 10-year professional basketball career after he started 96 games at Illinois, averaging 7.0 points and 4.5 rebounds while playing on three NCAA tournament teams and redshirting because of a broken hand during the 2004-05 season that saw Illinois reach the national championship game — has also shaped his view on the game of basketball. His successes in Israel were paired with Euroleague and EuroCup competition. He saw, and played against, style after style in country after country after making a name for himself in central Illinois during his standout high school career at Peoria Notre Dame.

“It’s really helped me to appreciate there’s not one way to do things,” Randle said. “There’s an ability to be flexible, an ability to look at guys through different lenses and scopes. For me it’s been awesome. It’s like going into the store. I don’t have a 12-pack of crayons. I’ve got the 96 or 120 jumbo box.”

Next stop: the desertRandle will put his 120-pack of crayons basketball knowledge to use with a Phoenix team perhaps on the cusp of a breakthrough. The Suns made a 15-win improvement in Williams’ first season as coach. That included an 8-0 record in the bubble when the NBA resumed its season at the end of July.

That eight-game stretch in Orlando came up just short of getting Phoenix into the playoffs for the first time in a decade. It did, however, push the Suns past 30 wins for the first time since the 2014-15 season, as they continue to try to build around 23-year-old guard Devin Booker.

“They took the bubble by storm,” Randle said. “To be a part of the Timberwolves the past two years, rebuilding and growing something, and now having an opportunity to be with the Suns as they grow and come into their own and are poised to be pretty special is obviously a great opportunity, but very humbling.”

Randle’s hire was part of a minor shake up in Williams’ coaching staff after the Suns parted ways with Larry Greer and Steve Blake and saw Darko Rajakovic leave for the Memphis Grizzlies. Randle will join current assistants Willie Green, Mark Bryant and Randy Ayers in working with Williams.

Williams, a Notre Dame grad, played in the NBA from 1994-2003. He has coached in the NBA since 2005, including a five-year stint leading the New Orleans Hornets/Pelicans.

“Obviously, his reputation proceeds him,” Randle said. “Between who he is from a coach to an individual to a man of faith, a lot of those things also line up with me personally. To be a young coach and be under the leadership of somebody like Monty Williams, I really couldn’t ask for more. Maybe at any age, but especially at my age and at this point of my career.”

Randle has spent just a handful of days in Phoenix since his hire on Sept. 8, with a plan to be fully moved with his family — wife Anastasia and son Noah — by the first week of October. That involves some non-basketball logistical hurdles to clear, including finding a home and school in the area.

“We’ll be Arizonans,” Randle said. “It’s going to be pretty significant, but even Chicago was different. I thought it was cold in Chicago, and I got to Minnesota and we got the record of negative-59. If things hold firm, unfortunately for Arizona and the city of Phoenix, I’m going to bring a record high at some point.”