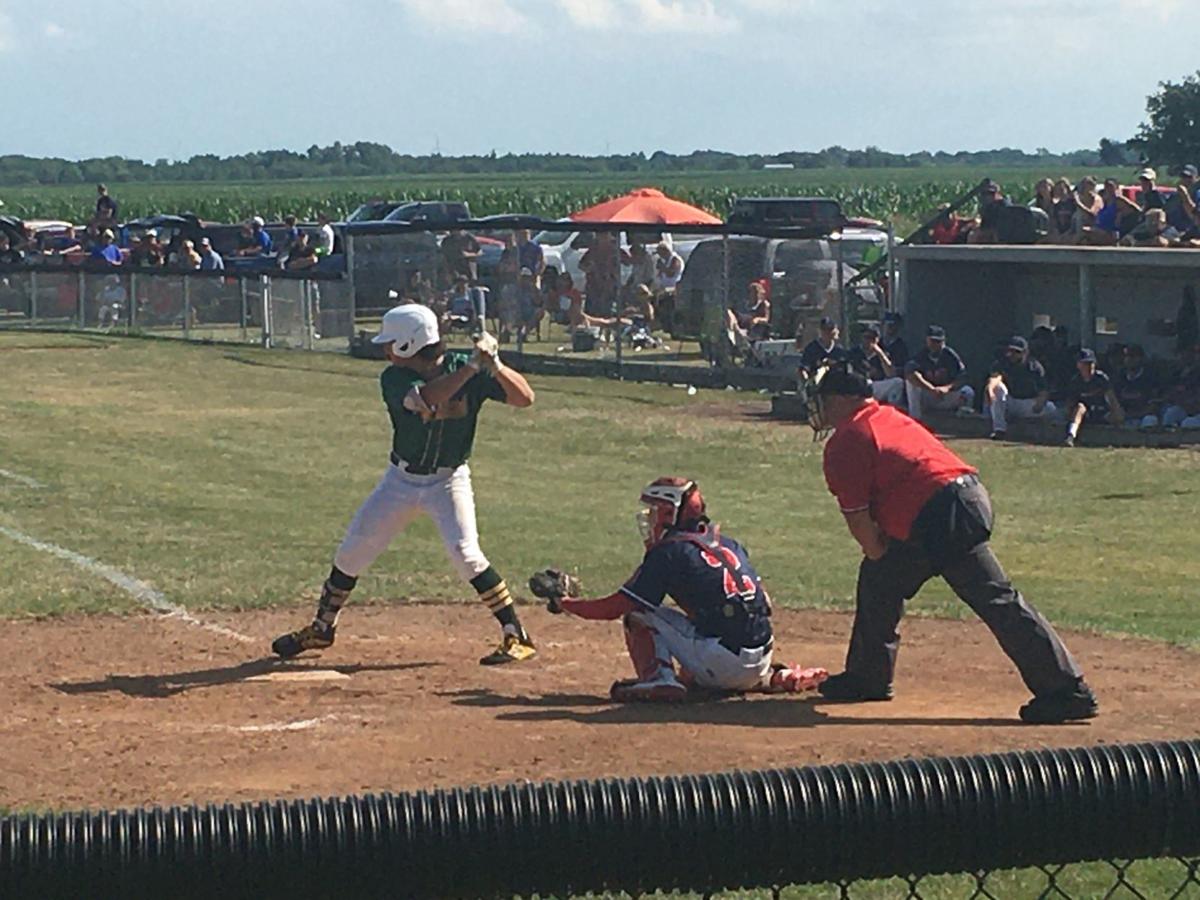 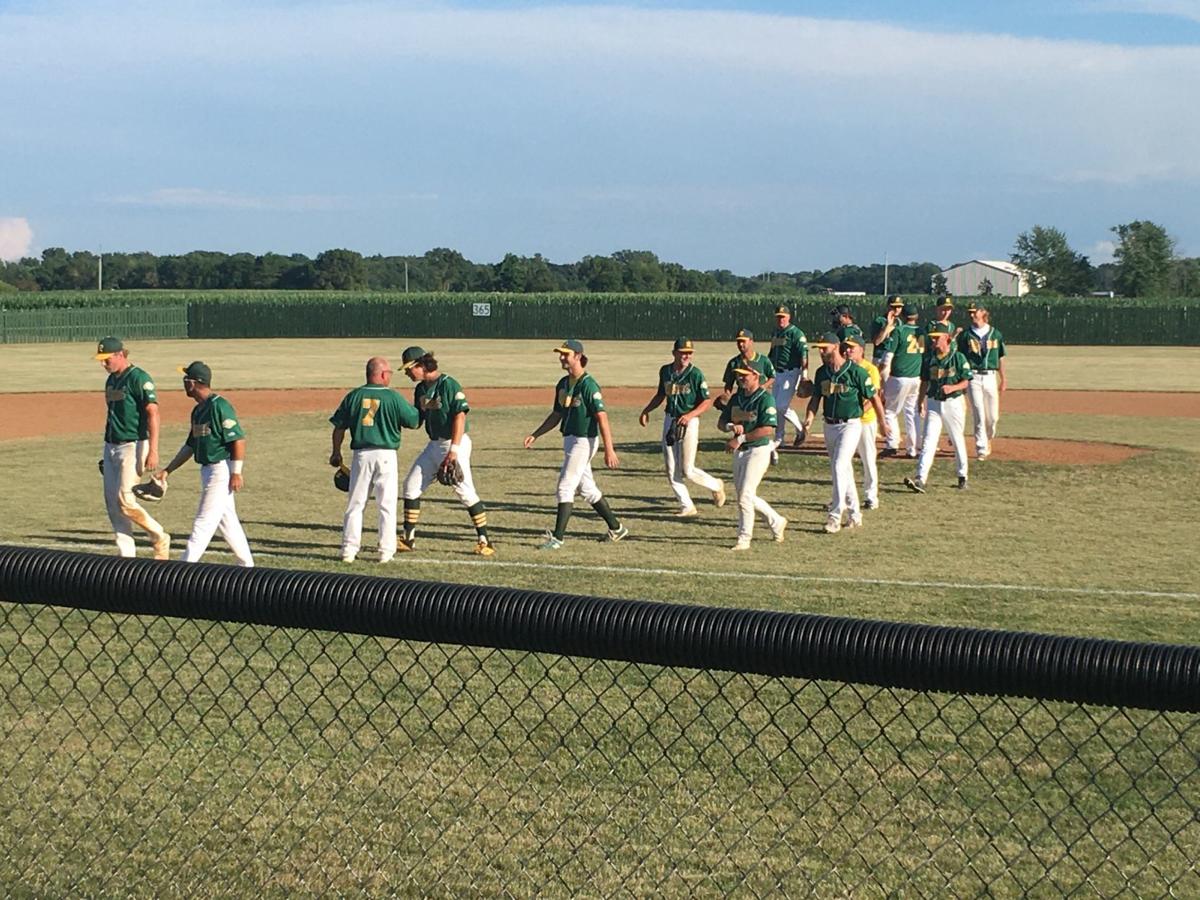 Members of the Royal Giants baseball team celebrate Sunday after sweeping an Eastern Illinois League doubleheader against Buckley at Scheiwe Field in Buckley. The Giants defeated the Dutch Masters 8-2 and 3-1.

Members of the Royal Giants baseball team celebrate Sunday after sweeping an Eastern Illinois League doubleheader against Buckley at Scheiwe Field in Buckley. The Giants defeated the Dutch Masters 8-2 and 3-1.

BUCKLEY — Anyone who thought the Eastern Illinois Baseball League rivalry between the Royal Giants and Buckley Dutch Masters might cool in 2020 because of the ongoing COVID-19 pandemic was in for a rude awakening Sunday.

It took almost no time for chatter to begin in the first doubleheader of a condensed, five-week schedule — specifically between Royal No. 3 hitter Cole Jones and the Buckley dugout.

“Chirping a little bit early on,” Jones said with a smile. “So that’s how it goes sometimes.”

It never really stopped, either. But that was just fine by Jones and his pals, considering the day’s results.

Jones bashed the first home run of 2020 E.I. League play and finished Sunday’s doubleheader with four hits and three RBI as the Giants defeated the Dutch Masters 8-2 in nine innings and 3-1 in seven frames at Scheiwe Field.

“It was big to get out of here (with two wins) just in case we end up with a tiebreaker situation and head-to-head and all that kind of stuff,” Royal coach Tim Dillman said. “Hopefully this sweep will pay off for us.”

In this year’s four-team league — Paxton and El Paso also are playing, while Gifford-Flatville and Game 7 Legacy have opted out because of pandemic-related concerns — each victory is crucial. The regular season lasts just three weeks, with each squad facing off twice apiece, before a two-week postseason.

Pairing that with Buckley (0-2) being the defending league champion, Royal (2-0) brought plenty of motivation into a season-opening double-dip that was well attended by a sports-starved fan base.

“I’ve been kind of getting some at-bats off some guys I know, but it’s definitely nice to get out here,” said Jones, a 2019 Champaign Central grad who now plays at Parkland College. “Have some nice weather and enjoy some baseball.”

Jones drove in two runs in Game 1 with a pair of knocks, sharing some conversation with members of the Dutch Masters’ dugout after the second.

The emotions ramped up in Game 2’s first inning, when Jones smoked an offering from Buckley’s Andy Davis over the right-field fence and gave it a long look before staring into the opposing dugout on his trot to first base.

Jones repeated the stare after a third-inning single, bringing a couple Dutch Masters out of the dugout to bark at a laughing Jones.

“We knew the tensions would be high,” Jones said. “We just came out, swung it well and pitched it well.”

Jones wasn’t the only Giant to engage with the Buckley side.

Asher Bradd, a 2019 Monticello alumnus now suiting up at Illinois-Springfield, was the specific target of one Dutch Masters fan’s barbs. The rooter jokingly encouraged Bradd to be more aggressive in his second at-bat of Game 2 after flying out previously, and Bradd responded with a first-pitch triple that led to him scoring a run.

“You can’t let it get in your head because that’s what the chirping’s for,” Dillman said. “Especially with Buckley — they’re good at it, their fans are good at it, and we just love playing up here.”

The Giants drove in three of Zenner’s six runs allowed while facing their last out in an inning. Colton Carr, a 2016 St. Joseph-Ogden alumnus most recently playing for St. Ambrose, finished the game with five hits and two RBI, while Bradd added three hits, one RBI and a couple stolen bases.

“The offense looked good,” Dillman said. “Up and down, our top six guys were tough outs (Sunday). ... We just played really well.”

That translated to the mound as well.

Nolan Roseman, a 2019 Rantoul grad playing at Quincy, hurled five innings of four-hit ball for Royal in the opener. Reliever Evan Wilson, a 2019 Villa Grove/Heritage product, further silenced the Dutch Masters over the last four innings, allowing no hits in that time.

“We’re still working through a few things, trying to get our lineup right and trying to find somebody that’s going to produce,” Buckley coach Ryne Scheiwe said. “We haven’t been getting that hit when we need it.”

The Dutch Masters received a boost before this season started when Storm Joop, the reigning E.I. League batting champ and most outstanding player, decided to link with Buckley after his Gifford-Flatville team opted out of the campaign.

Joop started his day and season with a hard double in Game 1’s first inning but was limited to three walks the rest of the afternoon.

That double actually led to the beginning of the Dutch Masters’ baserunning woes. Buckley made four Game 1 outs via miscues in that department, including Josh Krumwiede being cut down trying to score from first on Joop’s hit and Royal notching two fifth-inning outs during one rundown sequence.

Drake Schrodt, a 2020 PBL grad, was one of Buckley’s bright spots Sunday out of the lineup’s No. 9 spot, driving in a run while walking twice and stealing a base across both games.

“He usually puts together some good at-bats,” Scheiwe said. “Even though he’s hitting number nine, he’s out second leadoff guy.”

Game 2 was a pitching duel between the Dutch Masters’ Davis and Royal’s Jesse Remington. Davis scattered three runs and six hits over 5 1/3 innings, but Remington proved superior by spreading one run and five hits over six frames while striking out six.

Remington is available this E.I. season because his professional team, the Southern Illinois Miners, is not playing amid the pandemic.

“It was big to get him,” Dillman said. “He sacrificed a lot (Sunday) to be here — gave up some vacation time.”

Buckley did put a scare into Royal during the top of the seventh in Game 2. With Carr now on the mound, Schrodt and Nathan Walker both reached base to set the table for Krumwiede and Joop.

During Krumwiede’s at-bat, however, Jones called a timeout from shortstop. He informed Carr that he felt Schrodt, who occupied second base, had keyed in on pitch calls between Carr and catcher Casey Dillman.

“We were only going one sign, and I wasn’t anywhere near the base and the kid took a deliberate step back,” Jones said. “Whether he’s taking the sign or not, it’s better to be safe than sorry.”

Carr proceeded to punch out both Krumwiede and Joop on looking third strikes to send the Giants home happy.

“Not trying to jinx anything, but Coach Dillman ... really got us fine-tuned,” Jones said. “Hoping to get hot and stay hot down the stretch.”

Sunday’s other scheduled doubleheader, between Paxton and El Paso, was called off early in the day after poor weather swept through El Paso on Saturday. E.I. League secretary Trent Eshleman said Monday that the teams have not yet scheduled a makeup date.