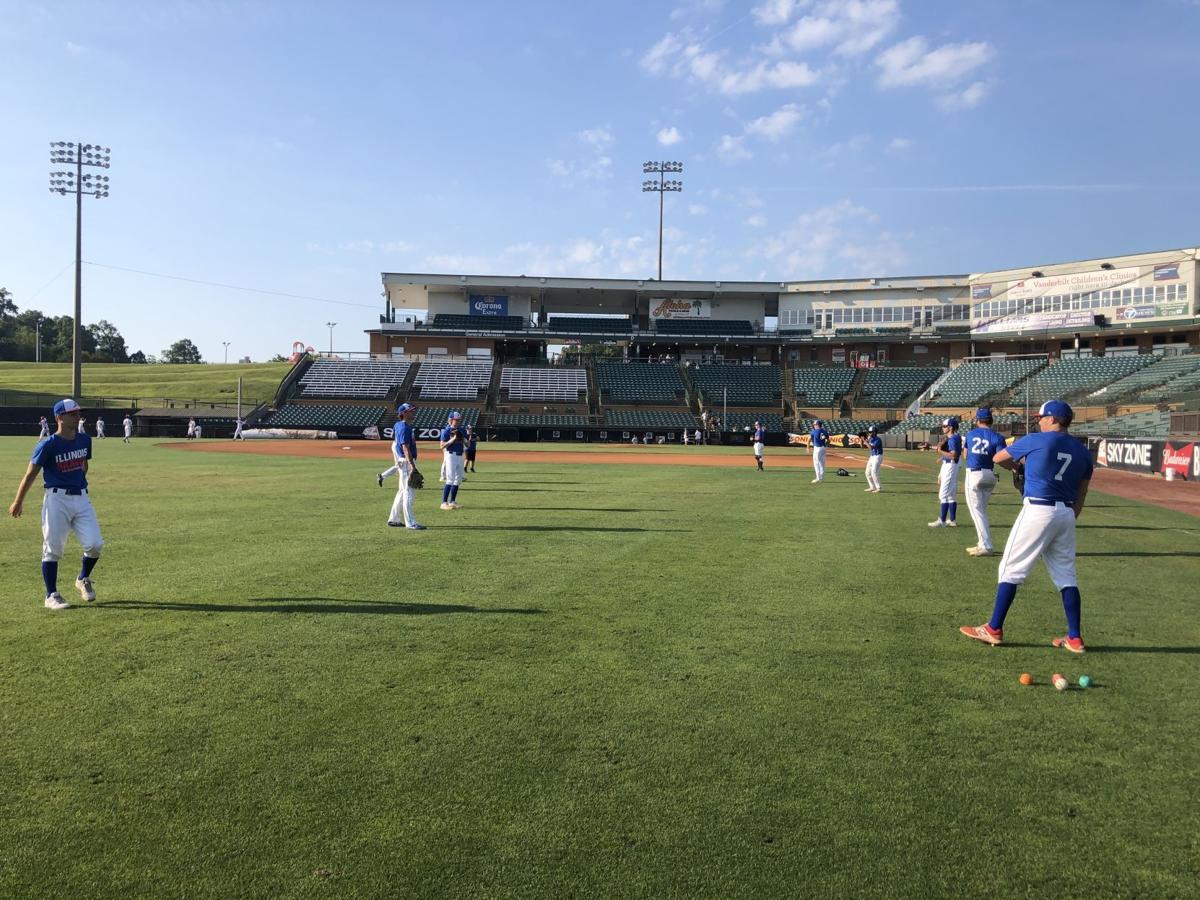 Members of the Illinois Braves 18U baseball team warm up at the Ballpark at Jackson prior to a 2020 travel tournament game in Jackson, Tenn. 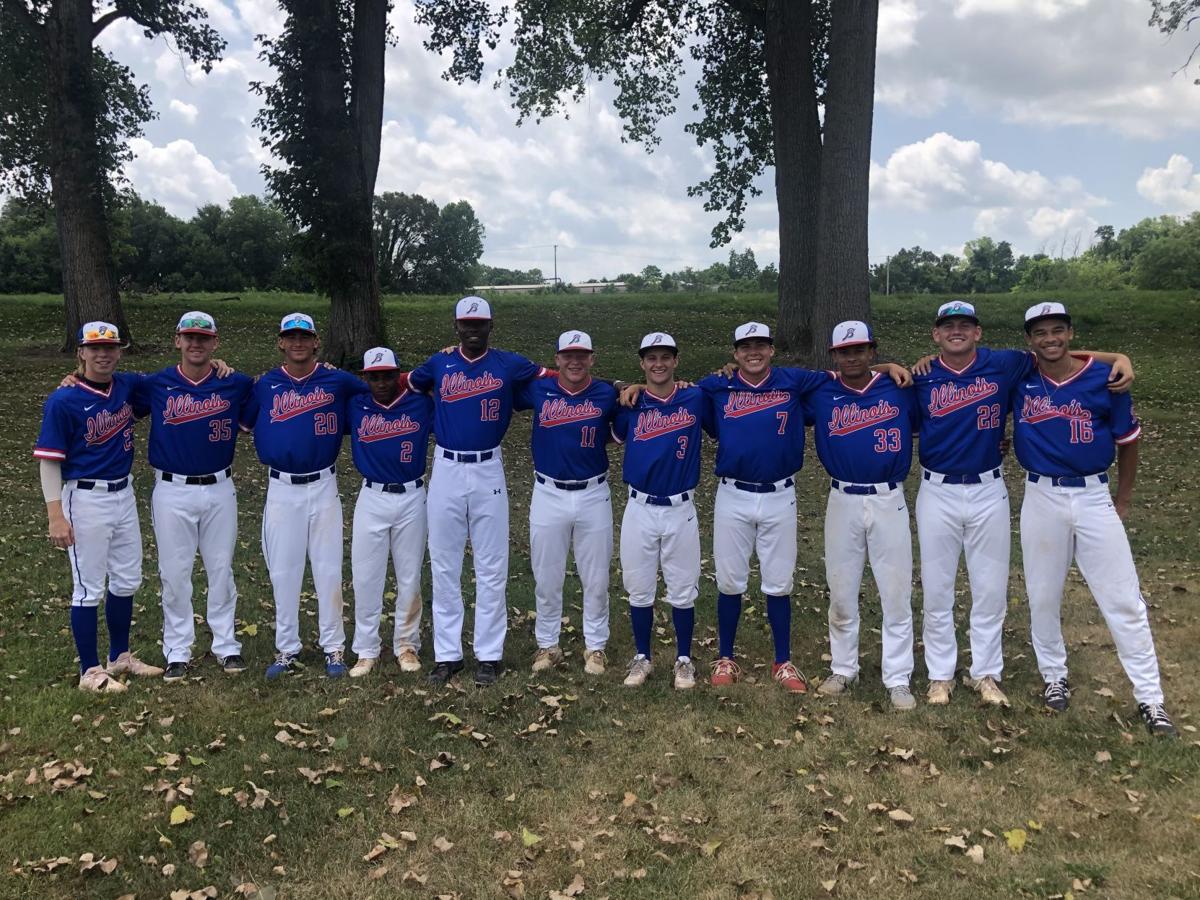 Members of the Illinois Braves 18U baseball team pose for a photo during a 2020 travel tournament in Dayton, Ohio.

Members of the Illinois Braves 18U baseball team warm up at the Ballpark at Jackson prior to a 2020 travel tournament game in Jackson, Tenn.

Members of the Illinois Braves 18U baseball team pose for a photo during a 2020 travel tournament in Dayton, Ohio.

Ryan Tabeling is so immersed in youth athletics that he’s been able to see how various groups are reacting to the ongoing COVID-19 pandemic.

As co-founder of The Cage, a baseball and softball facility that moved from Champaign to Tolono this year and reopened in late May under Phase 3 of Gov. J.B. Pritzker’s “Restore Illinois” plan.

As general manager of the Illinois Braves travel baseball program, which offers 9U through 18U teams.

And as father of son Logan and daughter Brynn — the former a recent Tuscola graduate on the oldest Braves squad, the latter a Tuscola senior currently involved in the AAU basketball circuit.

So there have been plenty of decisions for Ryan Tabeling to make considering athletics involving both his and other people’s children.

“Personally, it’s gotten to a point where I think the kids need something,” Tabeling said. “They need to be able to play, to be able to go out there. … Right now the uncertainty of everything has got people worried because no one knows (what to expect with the pandemic). We just haven’t seen anything from all these weekends. We’re not skipping a beat.”

On the Illinois Braves front, Tabeling said his athletes returned to the diamond as soon as the first week of June, though some younger teams started later in that month.

Tabeling recognized the desire for travel baseball would be heightened after the 2020 IHSA spring sports seasons were largely wiped out and their subsequent state series canceled. So he took a poll among his Braves parents: Do we play or do we sit out as the pandemic continues nationally?

“I didn’t want to play games just to be playing games. I wanted to make sure we were doing it the right way,” Tabeling said. “Taking all the precautions we needed to. … Basically everything was let’s go full ahead.”

It wasn’t that simple, of course.

Illinois didn’t allow travel events within its borders until late June, so Tabeling and his coaches had to get a bit more creative than usual with scheduling.

“We’ve been to Missouri, Indiana, Tennessee,” Tabeling said. “I wanted to check with the parents and check with basically people smarter than me I could rely on as far as doing this the right way and doing it the safe way.”

Tabeling also purchased “hundreds of dollars” worth of no-touch body temperature-taking materials and issued one such thermometer to each of his teams.

From then on, it was a matter of paying attention to different rules and regulations set forth by travel tournament hosts.

“Each tournament director basically sent out an email saying what their protocol was going to be,” Tabeling said, “and we were going to follow it.

“At the beginning they required a little more distance in the dugouts between kids. The umpire, I know for one of our tournaments, was behind the pitcher instead of behind home plate. We never shook hands after games. We kind of tipped hats. There was no people that collected gate fee or concessions, and the restrooms were closed.”

Tabeling saw restrictions beginning to ease as time went on, specifically with a limited presence of facility employees.

Things are different at his daughter’s AAU basketball showcases, according to Ryan Tabeling.

The fact these games are indoors is a big reason for that, and Tabeling has witnessed numerous precautionary measures he normally would have never seen during an AAU season.

“There’s some tournaments we walk in, you get scanned (for body temperature). You have to wear your mask at all times,” Tabeling said. “They take out the bleachers in some of the places so you have to bring chairs.

“There’s one (tournament) in Indiana two weeks ago where you were basically not allowed to come in until your team was ready to play. … Then, after a certain amount of games, they took everybody out of the gymnasium, wiped everything down, brought everybody back in.”

Outside of college coaches’ attendance being prevented by recruiting dead period rules, Tabeling said he feels attendance — at least at the AAU games for which he’s been present — is comparable to that of prior years. However, fewer games are being held at the same time, so folks can be far more spread out and adhere to social distancing requirements.

Thus far, Tabeling said all of the athletic activities on his plate haven’t included any COVID-19 scares for his family or Braves kids.

“Nobody’s ever been shut down,” Tabeling said. “You have to sign waivers — if you attended this facility — so if somebody at that facility were to get COVID they’d have to get a hold of our team and we’d have to let our team members know. But we’ve never had any cases of that.”