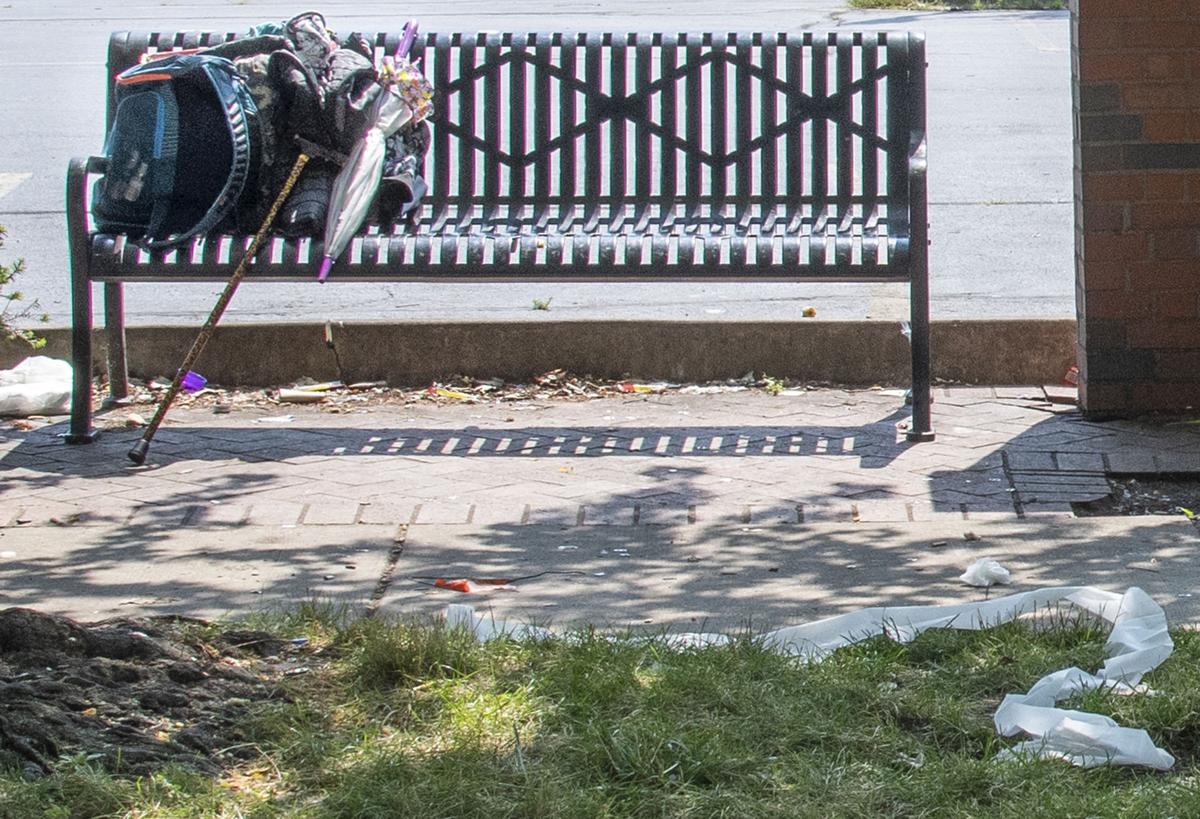 The bench along State Street in Champaign where Todd Ledbetter often slept. 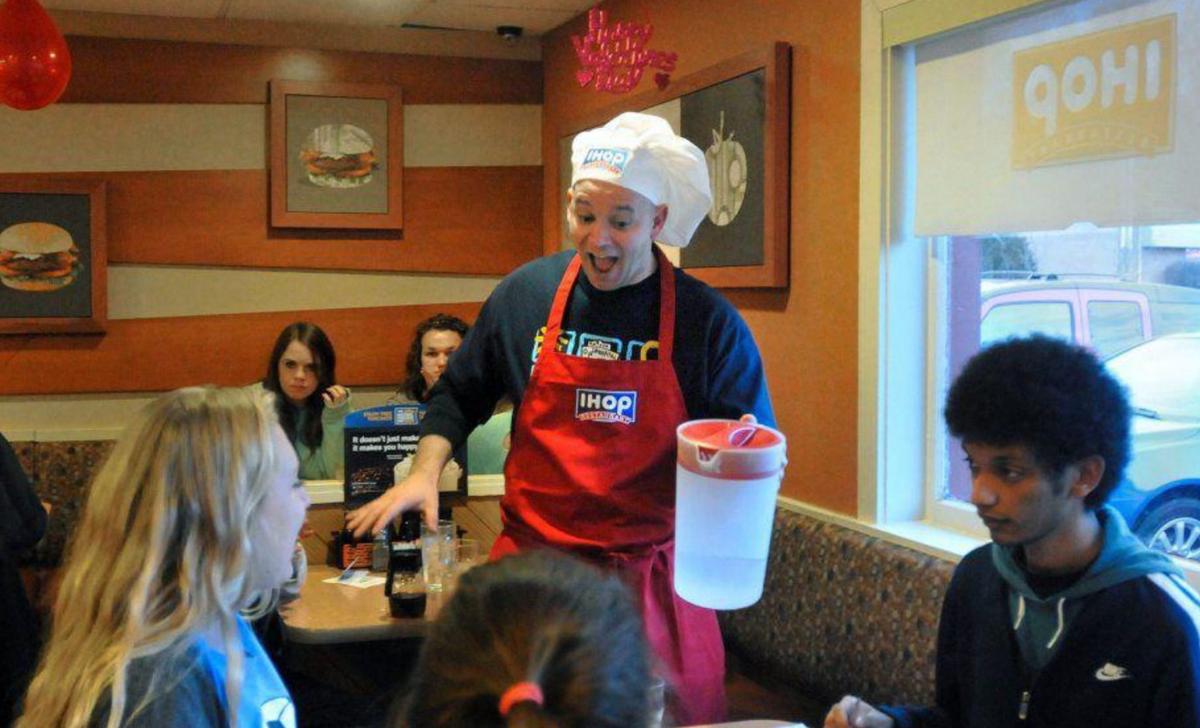 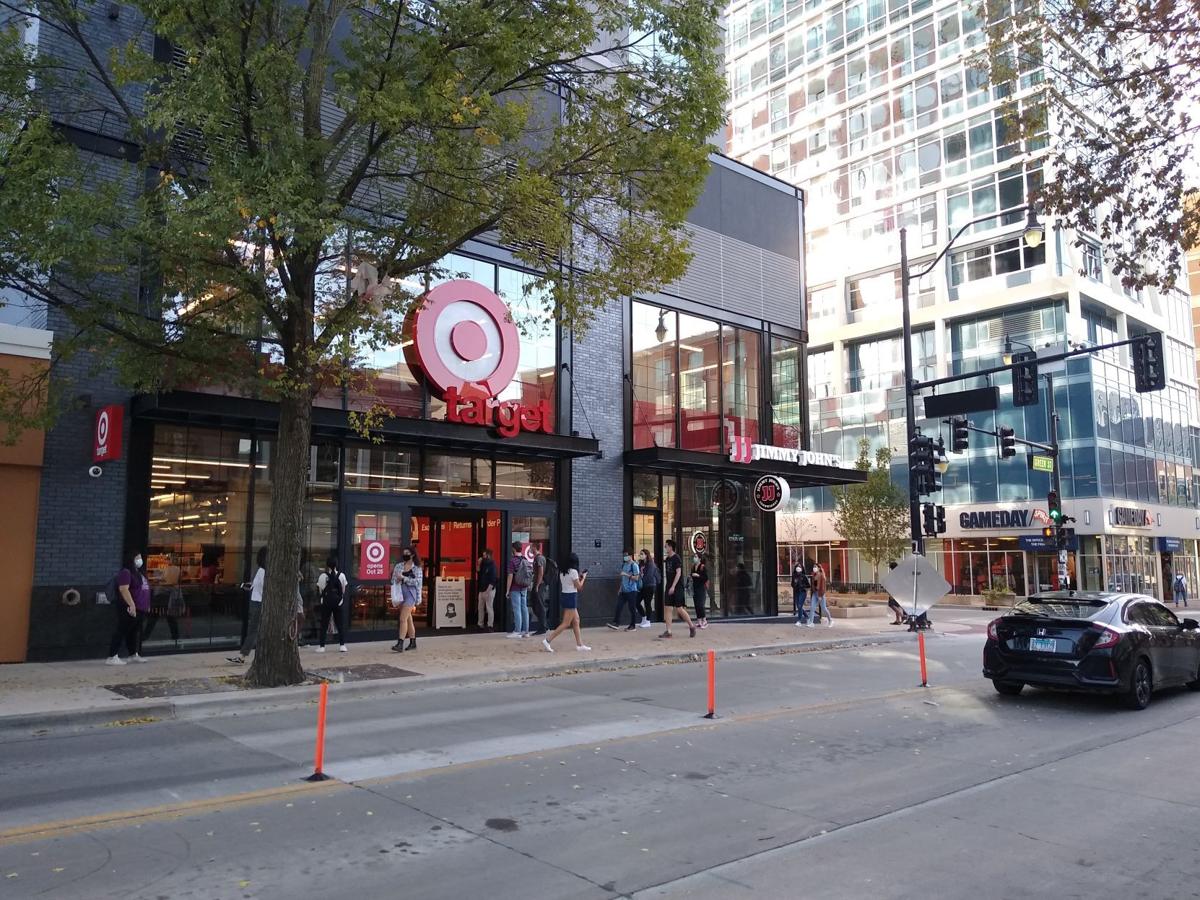 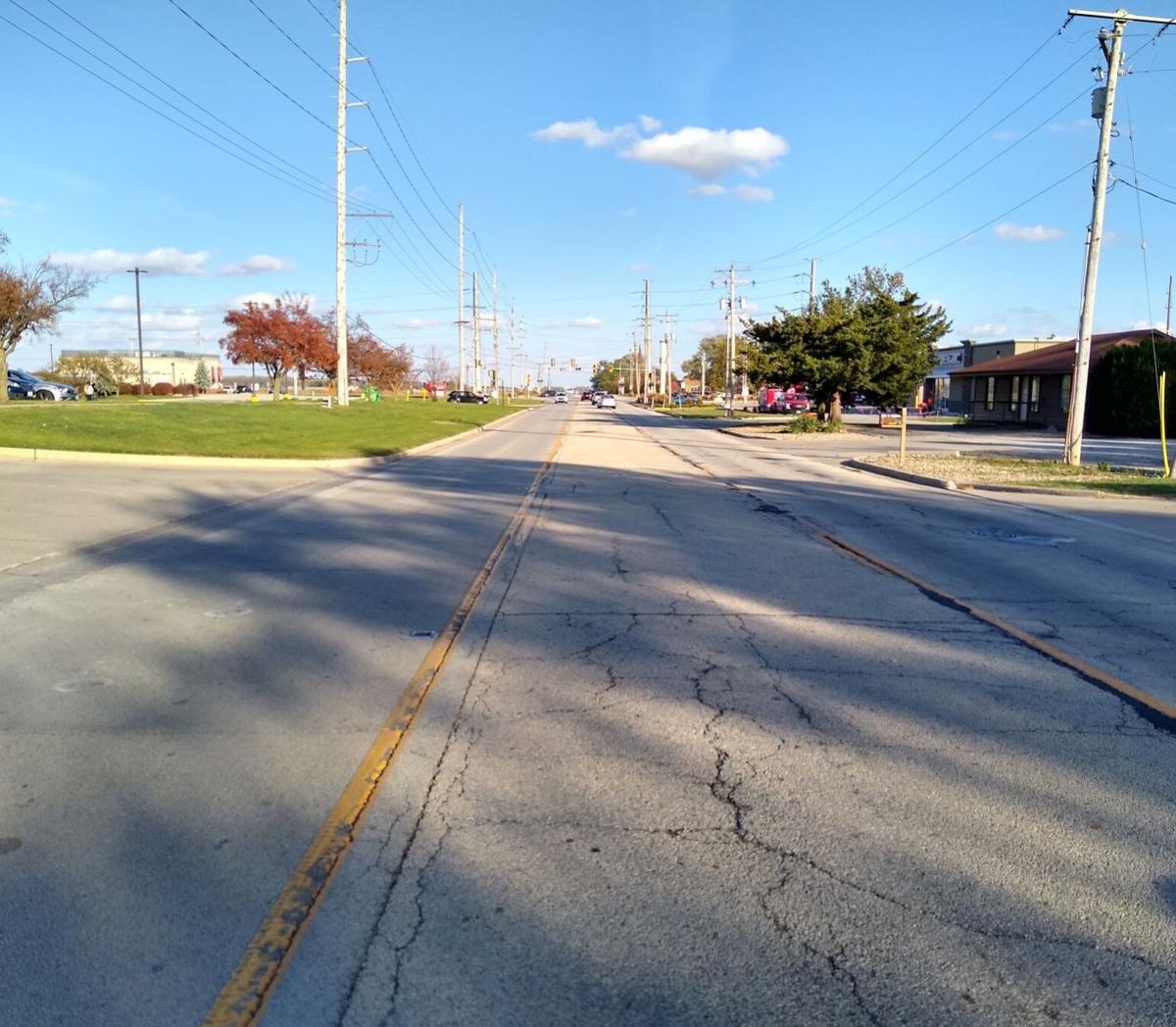 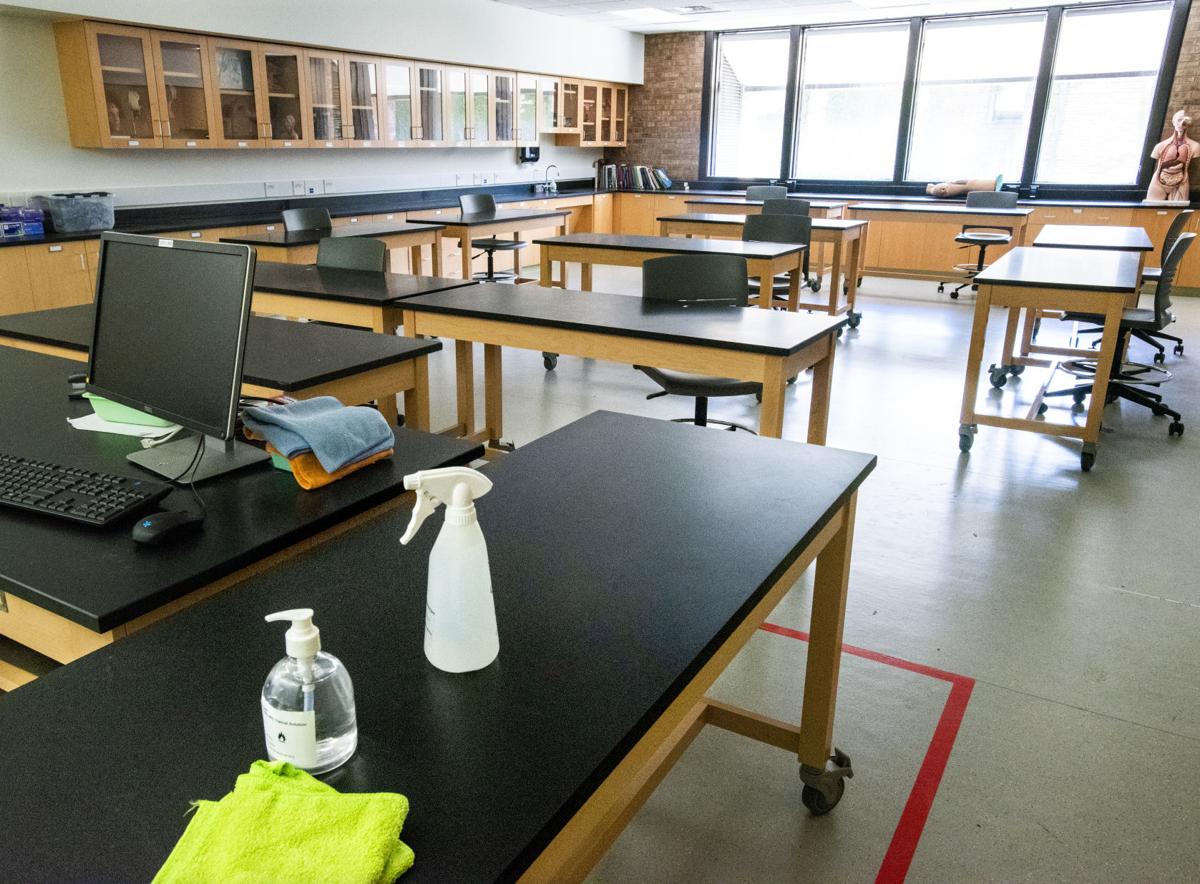 A biology lab is limited to one chair per table, and students and staff with use the rags and cleaner in the foreground to clean when they leave. At Parkland in Champaign on Thursday, August 20, 2020. 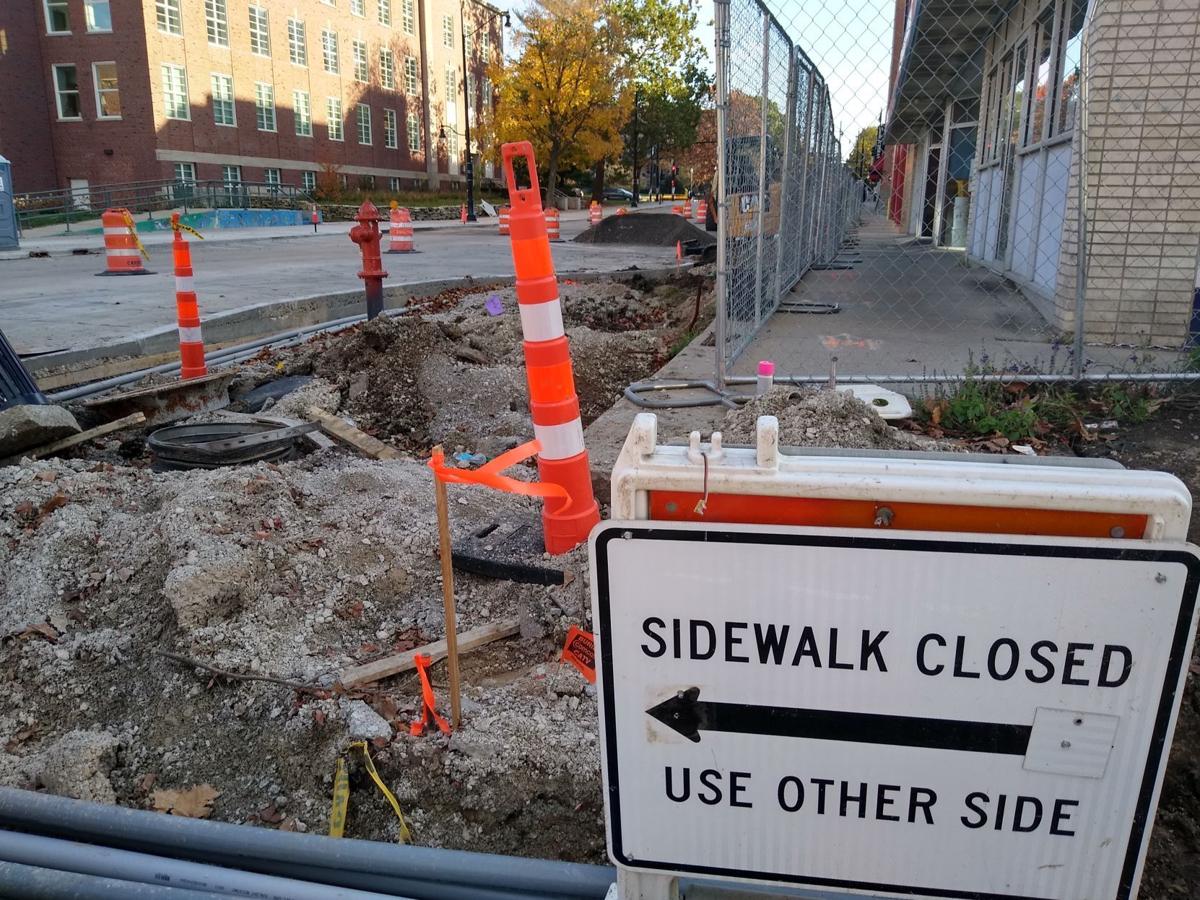 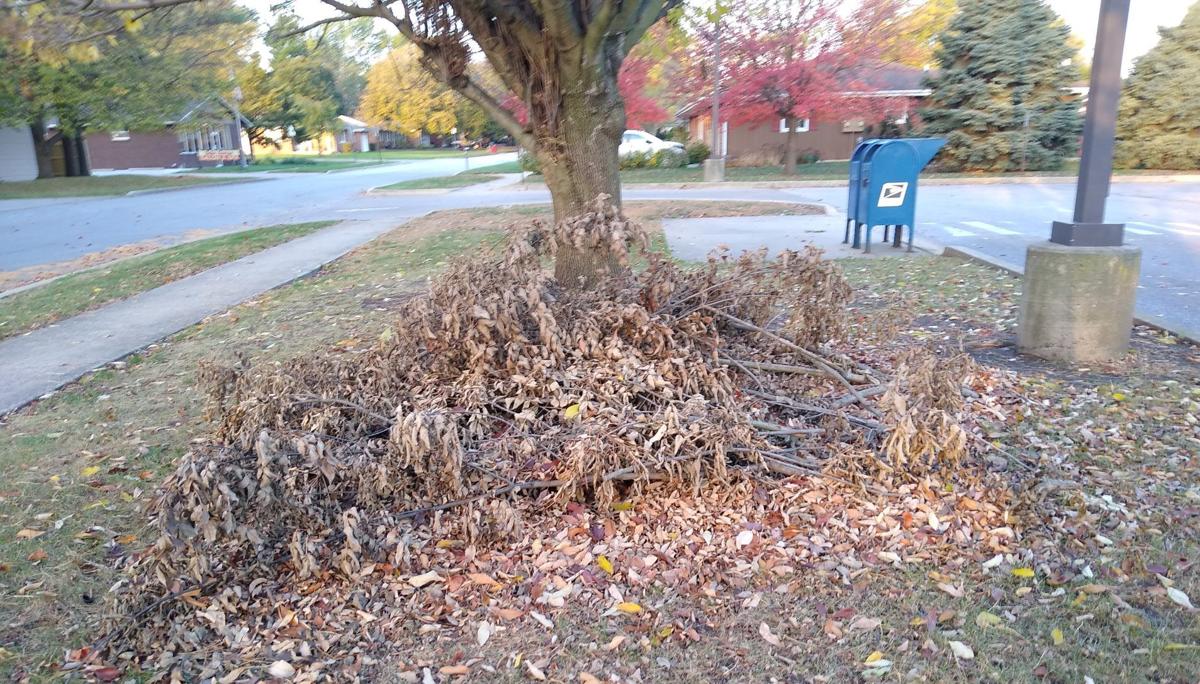 Also, homes razed near Urbana High School, trains through Champaign, I-57 traffic at Tuscola and Target near campus.

"Immediately north of Urbana High School, a house was recently torn down and along with the pre-existing open space we were thinking yet another apartment building (maybe even a high rise) would be popping up. Surprisingly the area instead appears to have been seeded for grass. It would be a wonderful location for a park. Do you know what the plans are for that area?"

It won't be a high rise. The property is owned by the Urbana school district.

"The demolition involved homes that were no longer being rented/leased, said Urbana school Superintendent Jennifer Ivory Tatum. "As part of the land expansion for future improvements at Urbana High School via our Campus Land Use Study, the homes were demolished."

Several homes along Washington and Iowa streets, just north of the high school, have been purchased and demolished by the school district over the years.

Was my ballot recorded?

"I saw your response about early ballots being received on the county clerk's ballot tracker, thank you. In my case I requested a ballot by mail, which I received. I voted and dropped it into the Brookens Center drop box. A few days later, I saw that it was scanned and marked received; however it didn't tell me if my votes were recorded, that is, whether it passed the signature identification check. Would I have been notified if my signatures did not match closely enough?"

"First of all thank you for trusting the vote by mail process, using the drop box, and helping to keep us all safe during this pandemic," said County Clerk Aaron Ammons. "After going through the process and being marked received if there's any problem with your signature we will notify you within two days. If you have been marked received and you haven't heard from us then you are all set. Thank you for your question."

"Have the Champaign police ever determined who was responsible for the beating death of the homeless man Todd Ledbetter last July? It was such a heinous crime against such a harmless man, and it still haunts me."

Mr. Ledbetter was found unresponsive on the east side of State Street, just east of West Side Park at about 11:50 p.m. on July 1. Three people allegedly had struck the 56-year-old man repeatedly.

"It remains under investigation," said Champaign Police spokesman Tom Yelich. "I am unable to comment any further at this time."

No, you would not have been allowed to vote four times.

"'In this case, if a voter were to sign applications other than his own, he would be committing voter fraud,' Matt Dietrich, a spokesperson for the Illinois State Board of Elections, told PolitiFact. 'That’s a felony, and an easy one to catch since these applications are intended for the specific voters to whom they are addressed.'"

Here's a link to the story.

"Any chance IHOP might come back to town? We need some good breakfast places."

Sure, but perhaps you are unaware that we're amid a pandemic and it's difficult to operate an existing restaurant let alone a new one.

But IHOP, which franchises almost all of its restaurants, is looking to grow. It does not, however, consider Champaign-Urbana — or anywhere in Illinois — a "growth market." Growth markets include Minnesota; Nebraska; Kansas; Green Bay and LaCrosse, Wis; Syracuse and Albany, N.Y.; Burlington, Vt., and San Francisco.

If that doesn't dissuade you consider this: it is currently seeking only candidates for multi-restaurant operations. And then there's this: there's a $20,000 "development fee" per restaurant for multi-restaurant operations plus a $40,000 "franchise fee" per restaurant. Once established you pay a royalty fee of 4.5 percent of gross sales plus a national advertising fee of 3.5 percent of gross sales.

But if you're still interested, I wish you luck.

"Is it too late to order football fan cutouts now for Memorial Stadium? Will they be available for basketball too at the State Farm Center?"

"It is not too late to order fan cutouts for the 2020 Illinois football season," said Illinois sports spokesman Kent Brown. "We're still working on a plan for basketball during the upcoming season."

The football cutouts range in price from $100 to $149. There will be four home games this year, the first on Oct. 31 against Purdue.

Here is the link for fans to sign up and to get further information.

"In February, The News-Gazette team wrote that another Target would open in 'The Hub' campus high-rise. Is this still the case given the other Target opened on Green Street 'The Dean' high rise two blocks north?

There will not be two Target stores by the University of Illinois campus, said Champaign Planning and Development Director Bruce Knight, only the one at the southeast corner of Green and Sixth streets. The confusion about The Hub and The Dean is because the Dean originally was known as The Hub, Knight said.

Yes, the village of Savoy hopes to widen Curtis from east of Prospect to Dunlap Avenue/U.S. 45, said Mayor Joan Dykstra.

"It was included in the last INFRA (Infrastructure for Rebuilding America) Grant for the Curtis Road underpass (grade separation). Because Savoy was not awarded the grant this year, we will include the INFRA/Complete Street Project in next spring's application," she said. "The roadway would be improved from two lanes to a four-lane cross section with a turning lane and off-street shared-use paths on the north and south sides of the roadway from Wesley Avenue to the intersection of Curtis Road with U.S. 45/Dunlap Avenue.

The entire project would cost an estimated $38.8 million, with half coming from the federal government, $12 million from the Illinois Commerce Commission, about $4.5 million from Savoy and most of the rest from Champaign County.

And yes, there are plans to extend Interstate Drive in Champaign but not for a while, said Bruce Knight.

"The project is in our 10-year Capital Improvement Plan, but toward the end, so eight or nine years out," Knight said.

"During the night I hear many different trains whistling through town. Just how many trains pass through Champaign/Urbana in a 24-hour period?"

According to the Illinois Commerce Commission the Canadian National line through Champaign averages 25 trains a day including six Amtrak runs.

"I read that community college enrollment nationwide is down about 10 percent this fall. How bad is it locally?"

The Illinois Community College Board reported last week that headcount at Illinois community colleges is down 13.7 percent compared with a year ago. Measured by full time equivalent it s down 12.5 percent.

"What can be done with egg cartons? Is there somewhere you can recycle them? I hate to destroy them as I know egg suppliers have to buy them."

If egg cartons are Styrofoam, they can be brought to Dart Corporation, 1505 E. Main St., Urbana, which has a Styrofoam collection area, said Susan Monte, who is Champaign County's recycling coordinator.

"The Syrofoam collection bins are located in the Dart parking lot entrance off Lierman Avenue, and can be accessed 24 hours a day, 7 days a week. Dart Corporation accepts a wide variety of recyclable Styrofoam, including foam cups, foam egg cartons, foam meat trays, foam ice chests, and foam packaging that is frequently used to protect fragile materials such as TVs during shipping," Monte said. "Remove straws, lids, tape, or any other non-foam material. Bring only clean (rinsed and wiped) food/beverage or block Styrofoam (no packing peanuts). Bring only Styrofoam marked with a #6 chasing arrow on it. Deposit Styrofoam into clear translucent bags provided onsite, tie securely and place bag in the collection bins.

"Cardboard egg cartons (clean) are on the accepted list of recyclable items by local haulers in Champaign County."

"In the past the county has held Household Hazardous Waste Collections. 1) Do you know when the next collection will occur? 2) In the past, cans of Latex paint were not included on their list of acceptable items. I have dozens of rusted cans of Latex paint that the prior owner of my house left; how can I go about getting rid of these? Garbage collectors will accept dried Latex paint; however, due to being rusted, I cannot open the cans in order to dry out the paint. Any tips on how to legally get rid of these cans, that won't involve a huge mess and tons of time?"

"Latex paint is not considered as hazardous waste and is not accepted at IEPA-sponsored one-day HHW collections," she said. "There is much interest in developing capacity to recycle unused latex paint in Illinois, and legislation is being prepared regarding an ‘extended producer responsibility’ paint program in Illinois that is supported by paint manufacturers.

"Tips for what to do with leftover and unused Latex paint include solidifying the Latex paint and disposing of the paint with regular household garbage. Steel paint cans can be recycled as well. One suggestion for dealing with hard-to-open rusted paint cans of latex paint is to punch holes in the top of the cans with nails in order to dry them out."

Political apparel in a polling place

"Are MAGA hats considered electioneering, and as such completely banned inside voting locations?"

"Why are the sidewalks on Wright Street being removed?"

The sidewalks on the west side of Wright Street from Green Street to Springfield Avenue are being replaced as part of the $47 million, multi-year Multimodal Corridor Enhancement (MCORE) project around the University of Illinois campus. MCORE, which began construction in 2017, is scheduled to be completed later this year.

"Is it a punishable offense when someone steals or vandalizes election-related signs on private property? I seem to have heard more about this problem in the past few election cycles, and especially so this year — on both sides of the aisle."

Yes, it is a crime in Illinois to steal or deface a political sign. In most cases it would be a misdemeanor since a yard sign is worth less than $500.

Trespassing on private property to deface a sign also is a misdemeanor.

You may have heard more about it this year because there seem to be a lot more yard signs this year than in the past.

"Is Tuscola busy enough off Interstate 57 to support all the gas stations right off the exit and within short distance?"

Apparently it is. Illinois Department of Transportation data says that in 2019 the annual average daily traffic count for the Interstate 57 interchange at Tuscola was 23,500.

"Why is the flag at University and Walnut east of the city building flying at half-staff?"

All United States flags and state of Illinois flags should be lowered due to the COVID-19 disaster proclamation, says the office of Gov. J.B. Pritzker.

"There's a large pile of limbs next to the mailboxes at the Savoy Post Office that has been there since Labor Day. Who's responsibility is it to clean those up?"

This week's First World Problem of the Week award winner.

Savoy Postmaster Zach Hannon said he believes it's the village's responsibility to clear the small pile.

He said the postal service didn't cut the limbs.

"We didn't authorize the trimming of those trees," Hannon said.

But he offered this solution: "If anyone wants some free firewood they can come by and grab it."